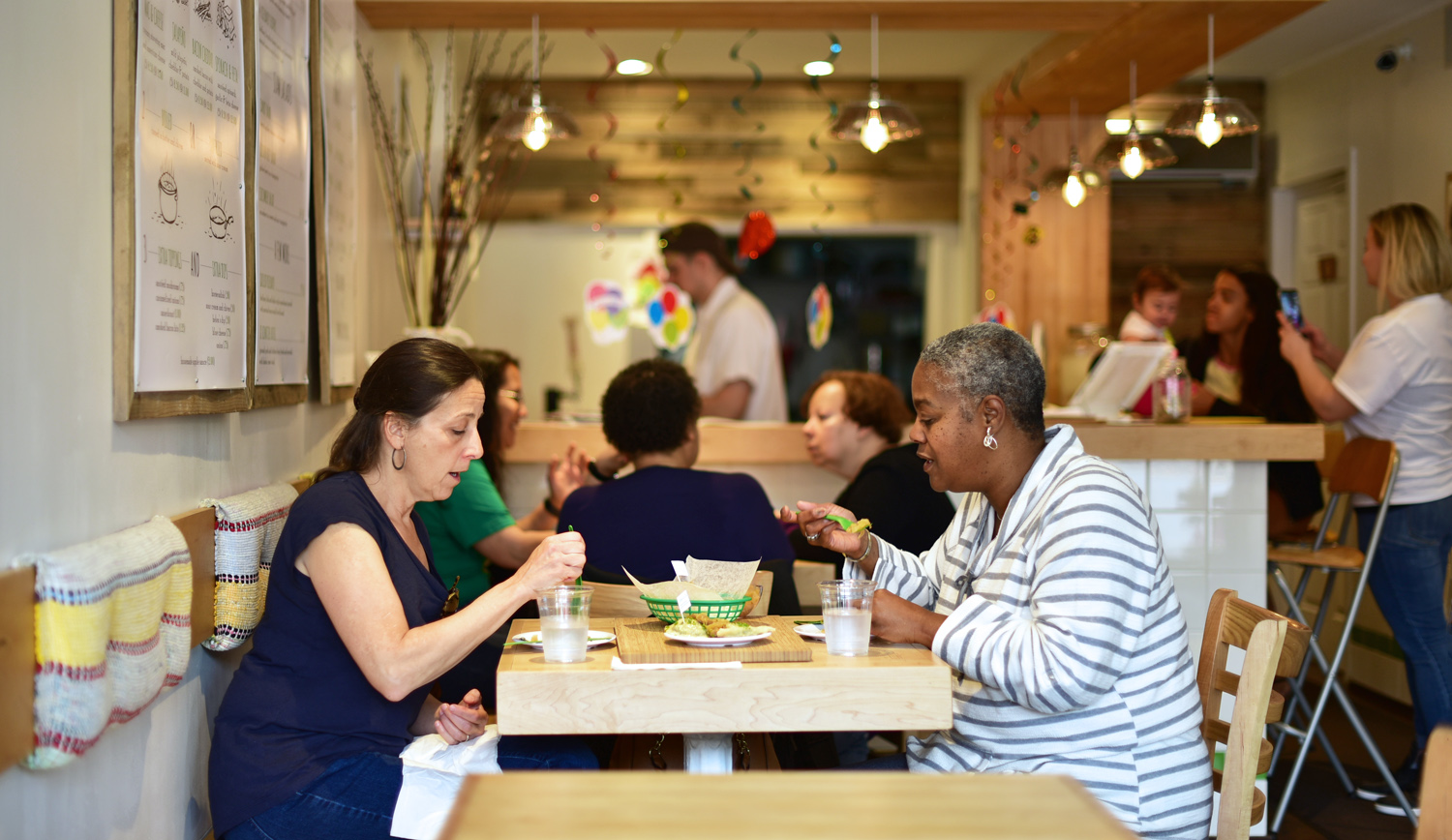 The culinary gransploitation continues! After Babushka Café, we’re visiting Baba’s Pierogies in Gowanus, Brooklyn. And it’s starting to look like the only thing Eastern European grannies know how to cook is dumplings. This time, the little bundles of Proustian bliss hail from Slovakia, the motherland of the eponymous and omnipresent Baba. On the web site, on the awning, on the walls, on the menu… You won’t see the octogenarian in the flesh, but her dough-kneading spirit will follow you until you hop back to the subway. 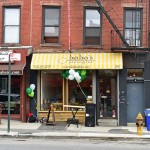 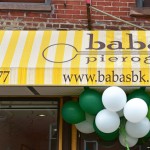 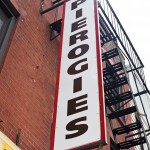 Yes, Baba’s Pierogies’ Baba is very real. Edible Brooklyn tells the whole story here. When visiting the restaurant, you can see a kind of fotonovela of Baba’s life on the wall of the dining room (thankfully without speech bubbles). In my interpretation, it goes something like this: Baba stands in her Slovak kitchen, Baba gets tired of dialectical materialism, Baba goes West, Baba stands in her new American kitchen, Baba enjoys normal materialism.

The eatery is pretty small, with just a dozen seats or so, and the decor fairly simple, with the reclaimed wood that Brooklyn and the people who love Brooklyn seem to love so much. As you’ve probably guessed, the menu is pierogi-centric: choose between 8 different savory kinds, have them boiled of fried, then add extra topics and/or dips. The dips are probably where the decision overload hits me, and I’ve never ordered any. If that’s not enough food for you, there are more pierogies for dessert. But there are other options too (at least for the savory food), such as a few sandwiches and salads, as well as kielbasa and schnitzel bites. 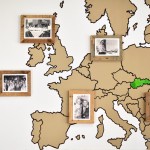 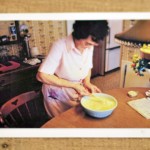 The pierogies here are made to order, and you can admire the owner (Baba’s granddaughter Helena) at work in the open kitchen. The pierogies all share some characteristics. The flour dough isn’t too thick, which I appreciate. They have a perfect filling-to-dough ratio. When boiled, the dumplings are quite tender, tossed in melted butter and topped with chives. When fried, they can feel slightly dry. Maybe that’s why they’re all served with sour cream, by default. They must be fried in a pretty small amount of oil. When I don’t want my pierogies to feel even a little bit greasy, I don’t order them fried.

But there’s something that particularly strikes me: they’re nothing like the pirohy I’ve eaten in Bratislava. Canonical Slovak pirohy are made with a rather thick potato dough, and more often than not, filled with brynza. Now, I’m the first one to celebrate culinary explorations, but I can’t help thinking that the pierogies at Baba’s would be better described as Polish or Ukrainian — because, filling experimentation notwithstanding, this is pretty much what they are. It took me a while to understand why. The answer can be found in the Edible Brooklyn article, if you pay close attention: Baba is an ethnic Rusyn, and used to live near the Polish border — it only makes sense that her culinary traditions differ from those of the Slovak capital, which is situated at the opposite end of the country. (Want to see more Rusyn recipes? Check out this site and order this book). Mystery now solved, let’s eat some pirohy/pierogies/dumplings. Lots of them, in fact. 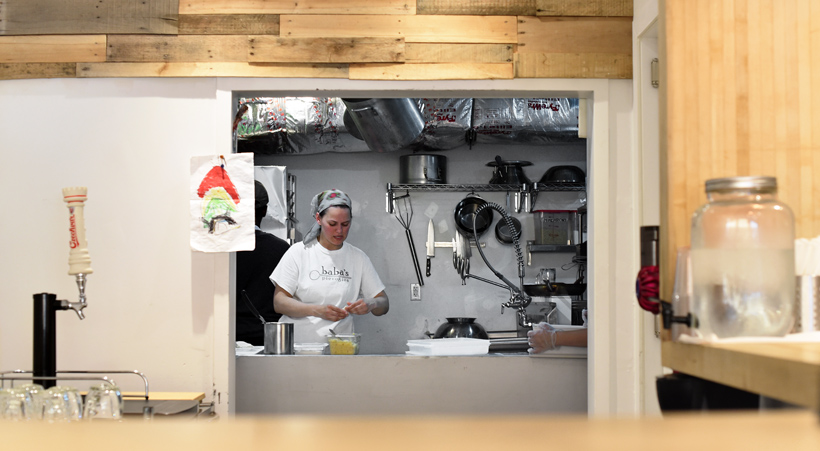 Let’s start the procession with the boiled pierogies, of two kinds that should be decisive for our assessment of Baba’s family’s skills. First, the potato & cheese pierogies, (with melted butter and chives, don’t forget). The world (or at least a small part of it center around Poland) has dubbed this combo “Rusyn pierogies” (pierogi ruskie in Polish), so these are the ones by which we shall judge Baba’s cooking. And they pass with flying colors, in terms of both texture and taste. They taste a lot like potato, thanks to a mixture comprised of finely mashed potatoes with tiny chunks, although I’d perhaps add more salt and some other seasoning such as black pepper or nutmeg. At the same time, they manage to feel very light and moist, thanks to the farmer cheese. 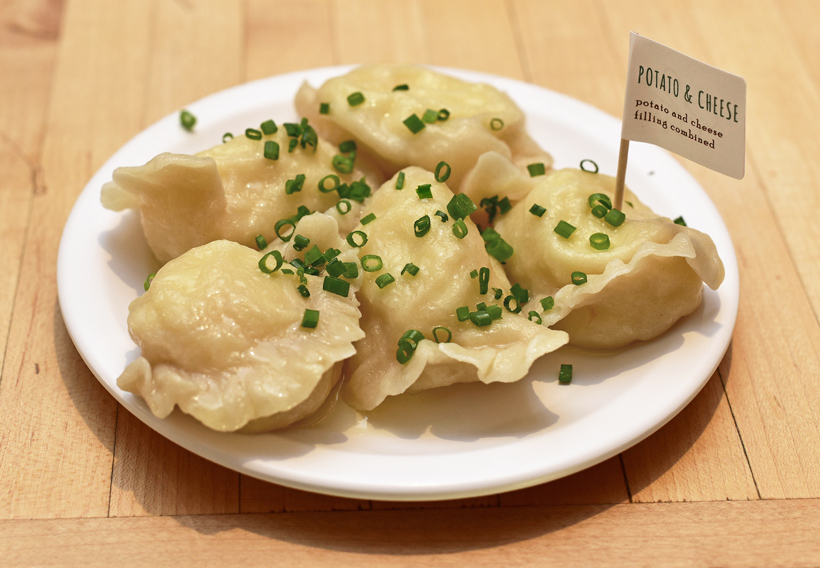 Next, there’s Helena’s own creation, bacon cheddar pierogies. There’s potato here too; this filling feels like potato purée that’s saturated with cheddar and speckled with bacon bits. Like their potato & farmer cheese rivals, they aren’t too dense, and in fact feel pretty light despite the rich ingredients. But the flavor is smoky and much more pronounced. The combo isn’t terribly surprising, but it’s very good. I didn’t have the potato & cheese and bacon cheddar varieties side by side, so I won’t be able to start a family feud by declaring one better than the other. All I can say is that I had each type on different visits, and they were both my favorite pierogies of their respective days.

The cucumber salad that we decided to have as a side is very nice too. Slightly sweet, not too sour, a little bit spicy but not too much. 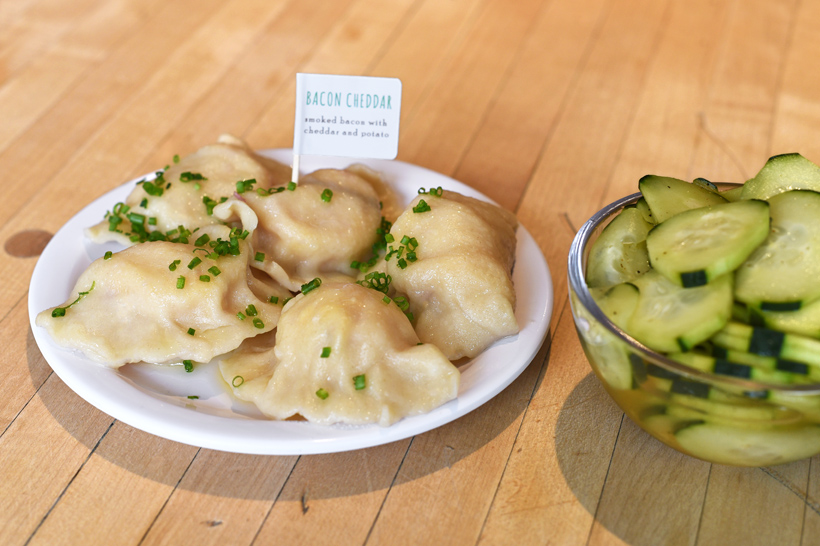 Moving on to fried pierogies (which can just as well be ordered boiled)… The cheese ones taste good and are very light, but the filling of farmer cheese and ricotta is a bit plain. I would add some subtle seasoning to the mixture to make it more interesting. 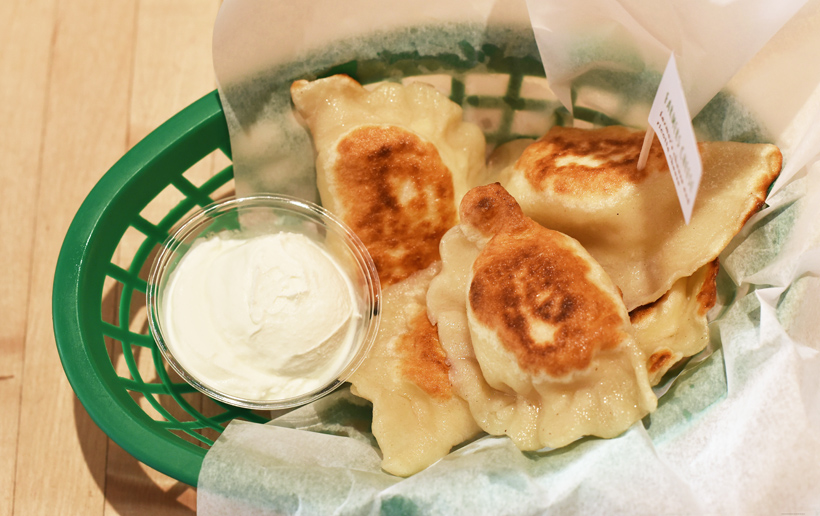 The sauerkraut pierogies suffer from the same problem. The filling seems to be only sauerkraut, just scooped out of the jar/barrel/bucket, drained, and rinsed. Boring! This also makes for somewhat dry dumplings, especially when fried, and despite the caramelized onions. Maybe Baba family could try simmerring the sauerkraut in some stock next time. 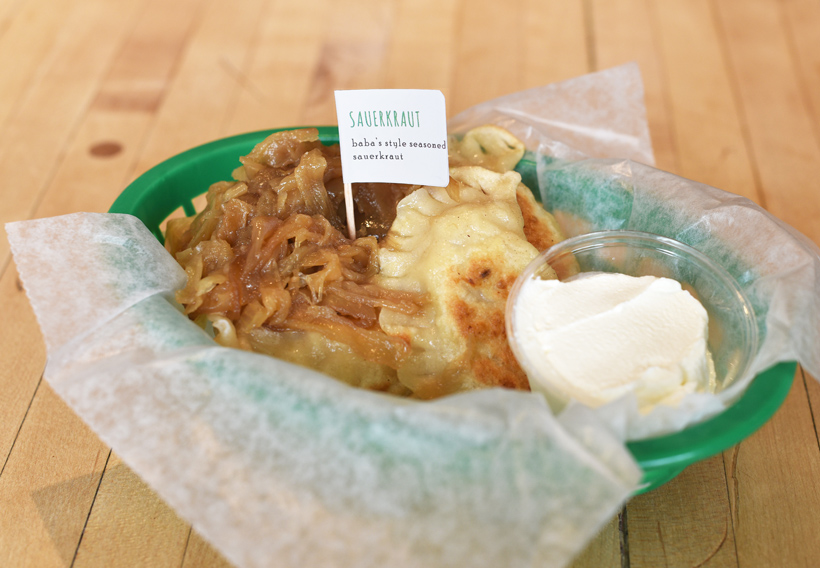 The fried feta and spinach pierogies, on the other hand, turn out very moist, and they strike the right balance between spinach and feta. But they contain a lot of garlic — too much for me, personally. 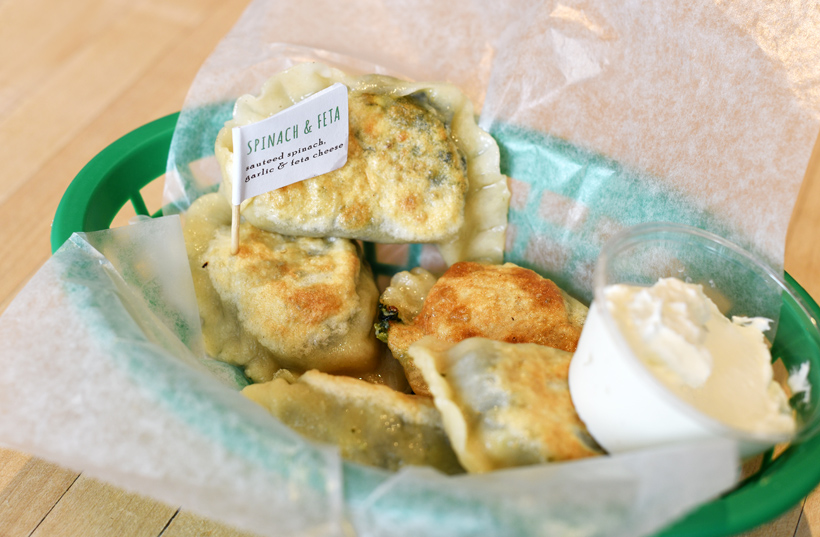 There’s more to Baba’s life than pierogies. The kielbasa sliders are four identical cute little sandwiches, each stacking a thick slice of kielbasa (from Muncan, I hear), some melted brynza cheese, sauerkraut, and house-made mustard sauce on brioche buns (from Baked in Brooklyn). I quite like the idea of making Slovak-inspired burgers with kielbasa instead of meat patties. It works out pretty well: all these traditional Slovak and Eastern European flavors are well balanced, producing a smoky, salty, slightly tangy result, and these bold flavors don’t let the brioche overpower them. The golden beet salad (cooked beets with not much else) makes for a good if simple side. 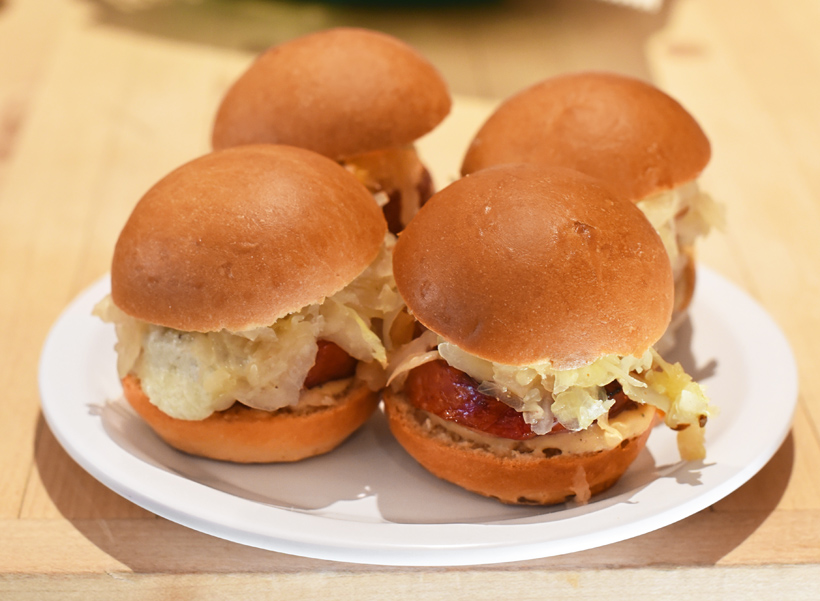 The schnitzel bites are another original idea. These little balls are filled with a mixture of ground chicken and pork that I would guess has been cooked, then shaped into a ball, breaded, and fried. The result is great and not dry at all. You can definitely taste pork and chicken in the meat mixture, together with garlic, thyme, and cream. The bites come with lemon and Baba’s mac salad. The latter, unfortunately, looks and tastes like a revenant from the dialectical materialism days, possibly revised for the worse by 1970’s American industrial cooking practices. Elbow pasta, carrots, and pickles are tossed in mayo, without salt. No, thanks. If you still have room for dessert, why not have a few more dumplings? Choose between blueberry or chocolate from the menu, or try some crazy specials if available — on a visit this spring, I saw birthday cake pierogies celebrating the restaurant’s first anniversary. In the blueberry pierogies, whole blueberries sprinkled with a pinch of cinnamon and maybe a hint of sugar are encased in the same pierogi dough used for the savory dumplings. Then they’re boiled, tossed in butter, and set on fire — that’s what the chef told me! A lot of fruity liquid oozes out when you cut them open, and I like that they don’t taste overly sweet. I also find that cinnamon is a much better match with blueberry than with apple (remember that blueberry pie?). The dumplings are served with a side of home-made vanilla whipped cream, which brings some more sweetness to this great dessert. 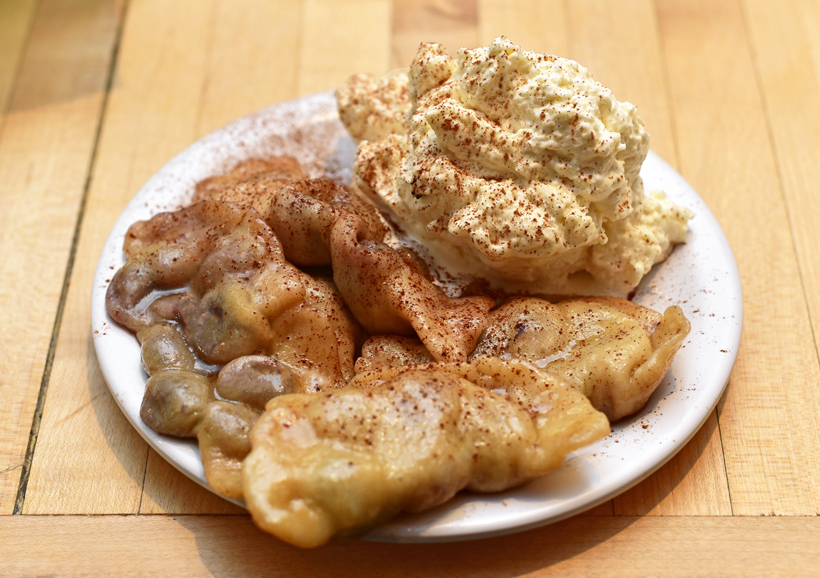 Beverages are pretty limited. The menu on the wall says “beer & wine coming soon,” with a later write-in claiming that they’ve arrived. Well, the wine must have got lost in transit, because there’s only beer. Service is also limited. You order and pay at the counter. Now that NYC has recently won the coveted title of most expensive city in the world, we New Yorkers find solace in using disposable tableware when we eat out, so we can at least pretend we’re saving a little bit of money on food — or so some establishments have apparently decided. I’ve already talked about this phenomenon at Babushka Café. At least in Brooklyn they reclaim wood.

And while we’re comparing the two, for roughly the same prices as Babushka, the pierogies at Baba’s are made to order, by hand. Does it make them better? In some cases, yes. In other cases, they’re just different (there’s no meat dumpling at Baba’s, for example, and no mac and cheese dumpling at Babushka).

Regardless of why and how, many of the pierogies at Baba’s are well worth trying. Some may need tweaks, in my opinion, and now you know which ones. I didn’t get to try some of the crazier options (like those birthday cake pierogies), so I can’t tell if they’re just gimmicky or actually good. The rest of the food shouldn’t be ignored either, as it’s very evocative of traditional Slovak flavors, but in creative new forms. Plus, how many people can claim they’ve eaten in a Rusyn restaurant? How many people even know what that means? Well, isn’t that special? 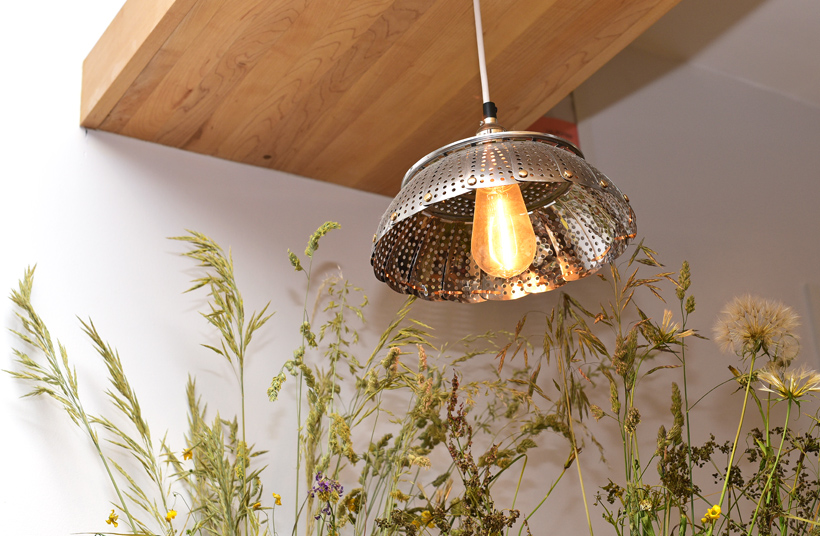 Czech and Slovak Festival at the Bohemian Hall...