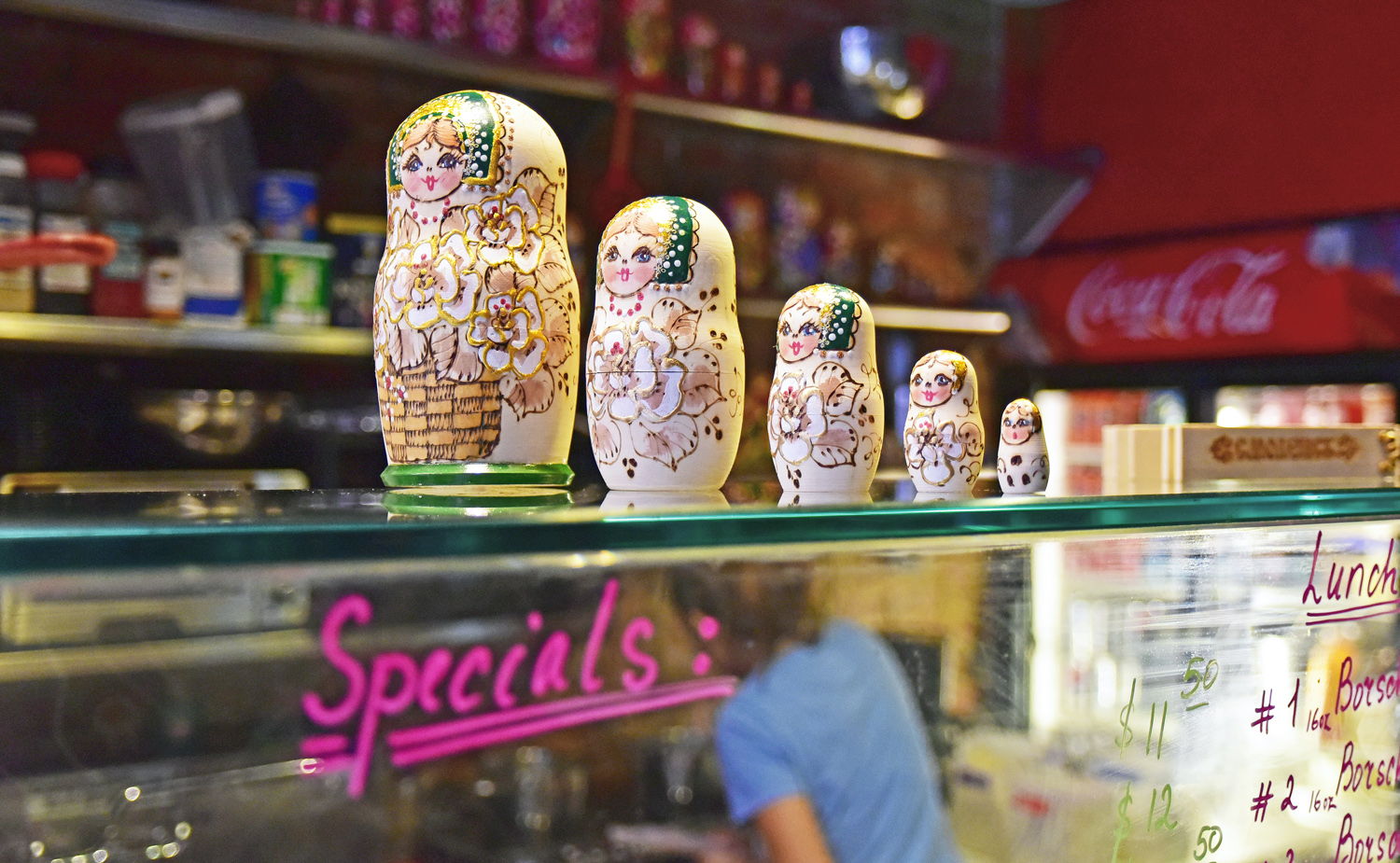 Culinary gransploitation is trendy, this we know. With Babushka Café in Greenwich Village, the phenomenon is brought quite literally to the forefront of the dining experience — babushka means grandmother in Russian. To quote a page from the would-be bullshitter’s handbook, the bigger the lie, the louder you speak. And sure enough, there are no grandmothers at Babushka Café. Just read the New York Times‘ genealogical review of the restaurant, and you’ll find out the age, place of birth, cultural heritage, and vacation tales of all the protagonists (you’ll learn a bit about the food, too). No babushka in sight.

This is a tiny joint. In lieu of dining room, a few stools stand behind a counter in the window. The kitchen space is worthy of a Manhattan studio apartment, and the whole operation is run by a staff of one at a time. Even by New York standards, it’s a miracle they can fit a restaurant in there. Maybe to compensate for the lack of babushkas, the digs are liberally decorated with colorful sets of matryoshkas. Are the dolls supposed to represent senior citizens? Don’t ruin my fantasies, please. 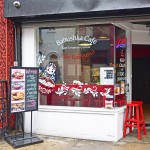 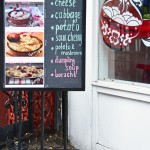 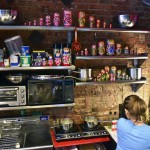 Right, I still haven’t told you what’s on the menu! Easy. Says the website, “Babushka Café serves pelmeni, vareniki, borscht, stuffed cabbage, stuffed blini and a variety of Russian drinks”. This is pretty much the exhaustive list (on the day of our visit: plus dumpling soup, minus stuffed cabbage). So we’ll call the place a Russian-Ukrainian dumpling house, where the gastronomic wisdom of the metaphorical elderly Slavic woman, the babushka, transcends the nationalist conflicts and folly of today’s Donbass War.

The eminent dumplings (aka pelmeni and vareniki) come in many varieties: beef, cheese, cabbage, potato, potato and mushrooms, sulguni and greens, and sour cherry. Except for the lattermost, they can be had boiled or fried, with olive oil or butter, as a regular or large portion, topped with fried onions, raw scallions, and/or dill. Finish them with rich sour cream, Tabasco, or Russian candy (what! you mean that’s not what the candies on the trays are for?!). 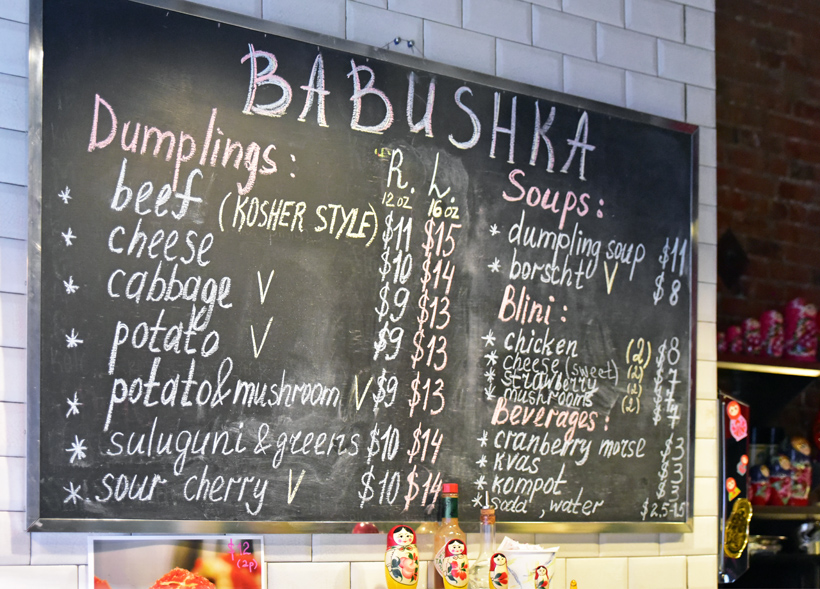 It looks like all the dumplings are made in advance and frozen. When you order them, they take a quick trip from the freezer to a pot of boiling water. Bummer. Are they even made on the premises? Regardless, they taste very good. The dough has the right thickness (neither paper thin nor too thick) and texture (very soft). The various fillings are generously portioned and appropriately tender, moist, and juicy, so much so that I hardly feel the need to add sour cream.

Let’s start with the ones I ordered fried. The cheese vareniki are good, though not particularly Eastern European since the cheese is mozzarella. It’s still a good choice for a melty filling.

The sulguni and greens option is a bit similar, but juicy at the same time. The cheese seems to be sulguni indeed; it’s saltier than the mozz but still melty. The greens taste mostly like dill, maybe slightly too much so. 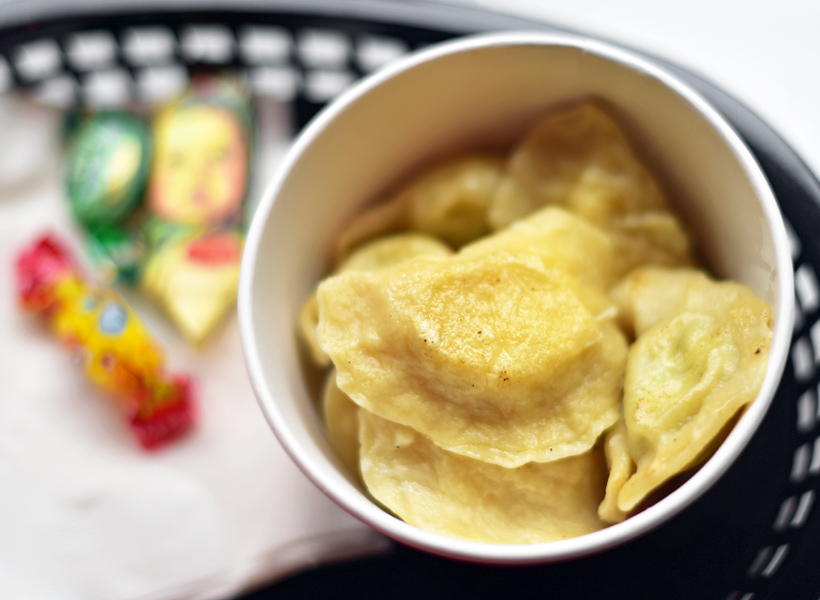 And now for the boiled ones (again, this is just how we chose to order them). The potato dumplings are also very simple, 100% plain mashed potatoes. While this is a tad boring, at least the filling isn’t too compact.

The beef (“kosher style”) pelmeni are great. The meat is very juicy with a bit of a pepper kick. Unfortunately this spicy kick is distributed somewhat unevenly. The NYT article says that the spice mix contains khmeli-suneli, but if that’s still the case, I feel like it’s overpowered by the pepper. 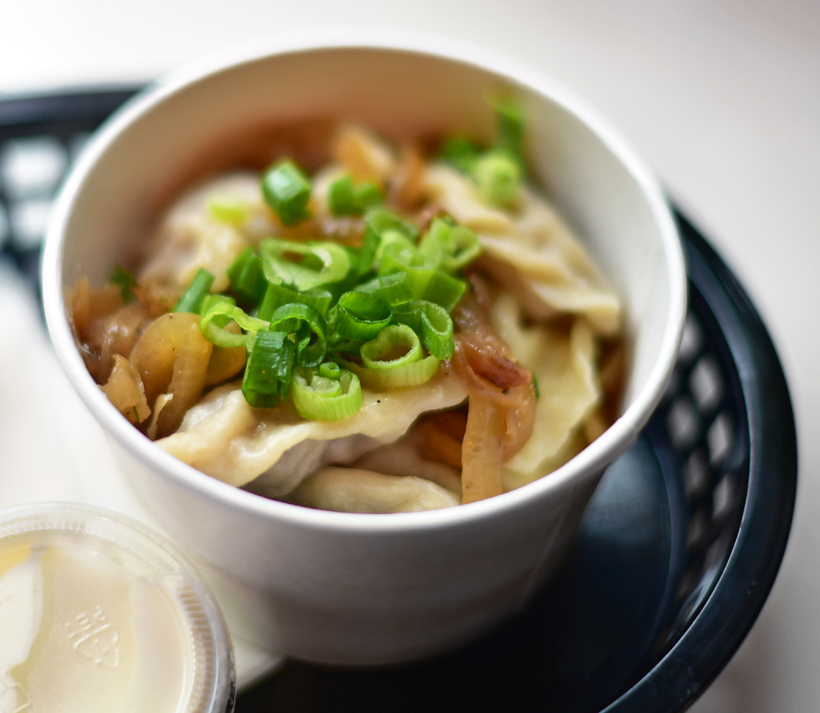 By order of decreasing preference, my picks would be: beef and cheese on par, then potato, cabbage, and sulguni+greens also on par. Overall, I like the dumplings better boiled than fried, because they come out juicier when boiled. I suspect that the very limited space and equipment in the kitchen makes it hard to fry them properly. Longer cooking times make the dough dry out a little, and you don’t really get the browning reactions you would expect. The fried onions and raw scallions are welcome toppings, but I don’t really care for the dill. 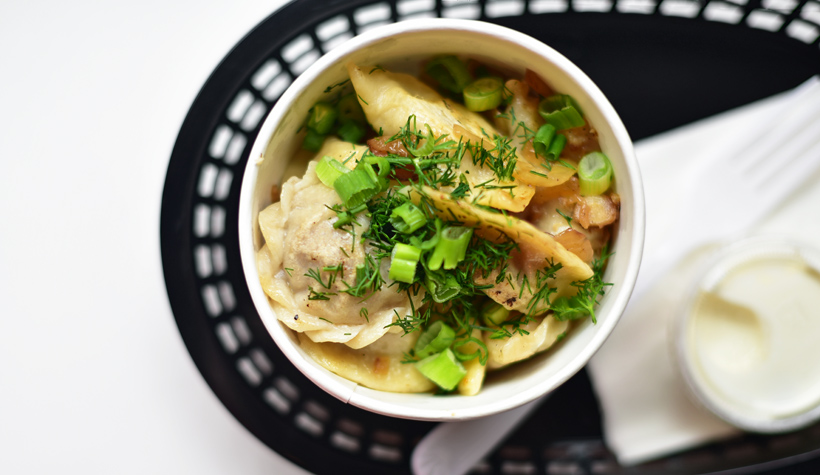 The stuffed blini, available in two savory versions (chicken and mushroom) and two desserts (strawberries and farmer cheese), are also made in advance, but they’re not frozen. They’re reheated on a kind of griddle, and acquire some color in the process. The menu board displays the number 2 between parentheses next to each variety. I can only tell you it mightn’t mean what you think, since my order contained only one blini.

The chicken blini is filled with a very finely ground chicken mixture, the kind that feels like it’s been cooked before being ground. The whole thing is slightly sweet (both the blini and the meat, I think), and otherwise seasoned with salt and pepper. The sour cream comes in handy this time, and without it the dish is really plain with a dry mouthfeel, just like the container it’s served in. 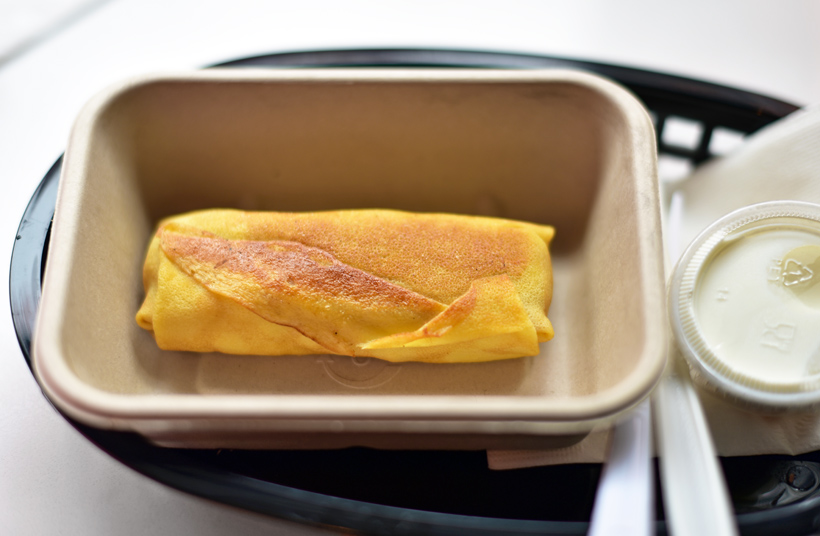 We didn’t try the soups or the desserts — we really came for the savory dumplings. In addition to the sour cherry vareniki and the farmer cheese or strawberry blini, a glass dessert cloche features a small assortment of pastries, including baklava. As for the drinks, choose between the usual sodas and “a variety of Russian drinks”, which consists of kvass, mors, or kompot. The cranberry mors is just meh. Too watery and not sweet at all, while the cranberries make it very acidic. 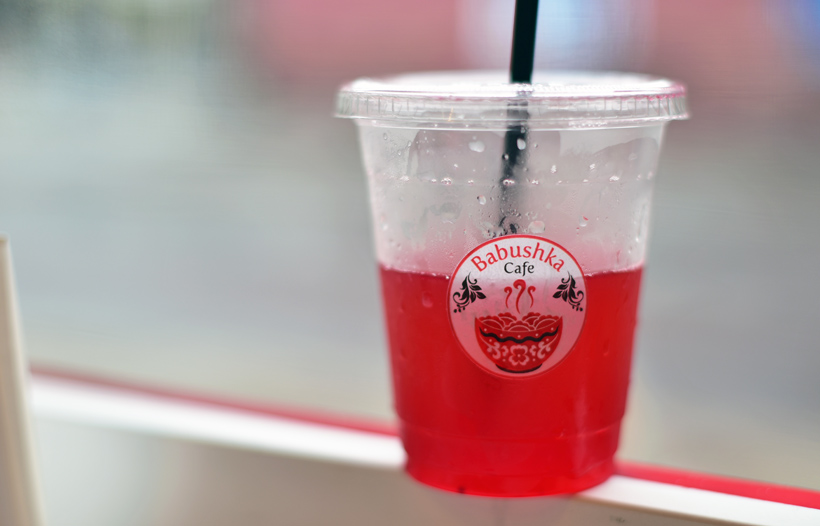 There is no service per se. You order at the counter, pick up your food when it’s ready, and either grab a window stool if one’s available or go eat outside. Even though all the food’s already made, preparing a few orders at once in a saucepan on a portable induction cooktop can take some time.

The dumplings at Babushka Café are well worth a try. The few other menu options I’ve tried are less successful, but who says one needs anything more than pelmeni and vareniki to sustain oneself? Of course, as with any hole-in-the-wall, there are downsides: you’re eating reheated frozen dumplings, most likely prepared elsewhere, served on plastic trays, in cardboard cups, with plastic silverware, at Manhattan prices. Your babushka would probably frown. Your matryoshkas will maintain their impassive, pursed-lip composure. 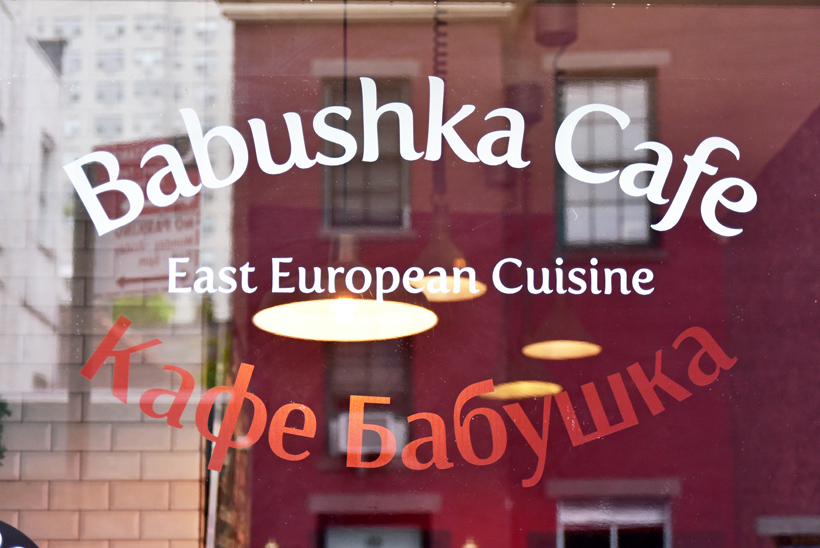 And… this place has already closed! Really not surprising.