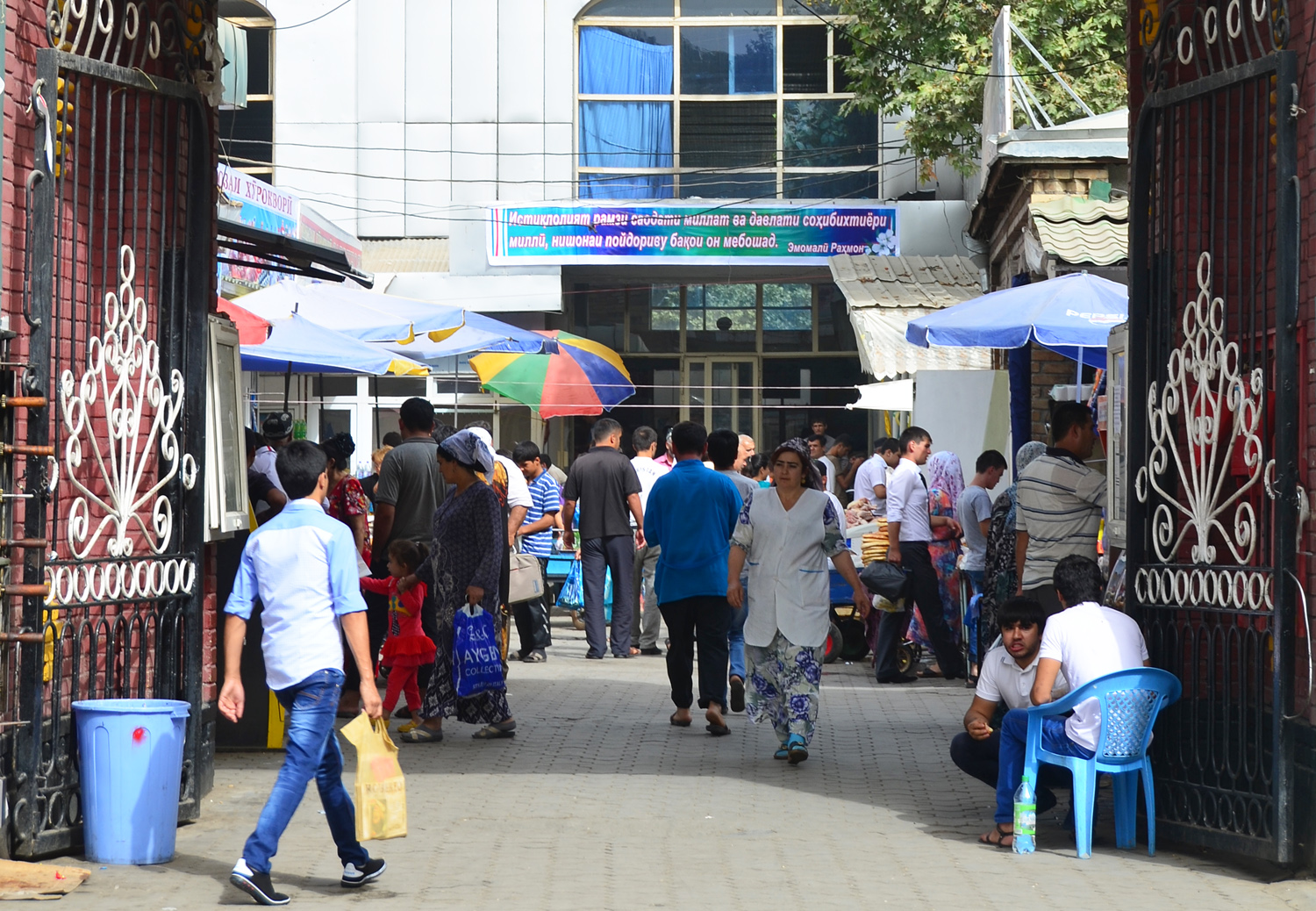 Now that we’ve explored Dushanbe’s cultural attractions, we’ll head to the central market. Shah Mansur Bazaar, also called the Green Bazaar, is easy to find: it’s a bona fide landmark, alongside club Port Saïd and the beer factory. “The heartbeat of Dushanbe trade,” says Lonely Planet. In a city literally named after a market, expectations are high. We dream of weathered old Pamir herders selling their yak meat, shepherds bringing their fattest lambs for slaughter, mountaineers selling their pungent cheeses, fishermen producing the finest specimens from remote pristine lakes, fresh bread coming out of the tandoor oven, plov simmering in giant kazans… Whoever this Shah Mansur is, his name seems to suddenly crystallize all the mysteries of the Orient, and carries more promises than Marco Polo come back from the Silk Road.

Nope. While still worth visiting, Shah Mansur Bazaar lacks distinctive features. The food halls that host it are inconspicuous —  especially compared to those in Khujand or Tashkent, for example. Unless this is your first market in Central Asia, the food elicits a sense of déjà vu and is unlikely to create durable memories. Locals don’t cross half of the country to sell their very best products in the capital. There are reasons for this, I presume: a journey of several days in a semi-arid climate without refrigeration would simply result in rotten goods, and anyway, in one of the world’s poorest countries, who says the locals have any very best products to sell?

The bread, at least, is unmistakably Tajik. You can clearly see the two types encountered time and again during your meals: the yeast dough non and the laminated dough fatir. 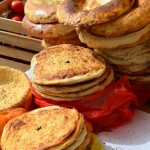 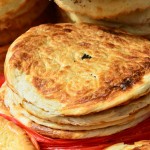 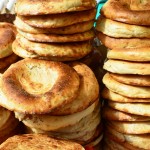 Next, fresh produce galore, which is usually the most colorful but least interesting part of any market, as there’s nothing that looks more like a tomato than another tomato. But just to give an idea of what to expect in Tajik dishes, I spot apples, pears, plums, peaches, grapes, watermelons, and other large size melons for the fruits, and cucumbers, green peppers, red peppers, tomatoes, eggplants, scallions, dill, parsley, and purple basil for the vegetables and herbs. Seasonally-minded readers will have deduced that this was in early September, while survivalists will have noticed sunflower oil, corkscrew pasta, and spaghetti among the grocery items in the background. 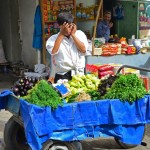 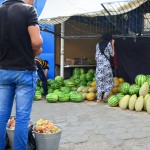 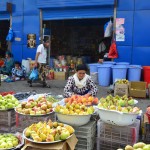 Those mountaineers did bring their pungent honey, though, and I remember seeing a few beehives on the road from Khujand. Note, however, this anecdote: the book Tajik National Sweets (Dushanbe, 1969) explains how to make artificial honey. Bring 1.5 kg sugar and 3 glasses of water to a boil, add 1 tsp citric acid diluted in 25 g water, simmer for 15 minutes, cool to 80 C, stir in 2 tsp baking soda, cool to 30-40 C, and add 5 g honey essence and 1 tbsp natural honey (I assume the latter is for making funny claims on the label when you sell it). And who says Tajik sweets, says nuts and dried fruits: raisins, apricots, pistachios, cashews, hazelnuts, walnuts, and both plain And sugar-coated almonds. Notice that as usual, the Tajik man does not smile. 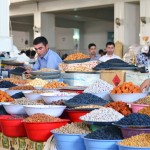 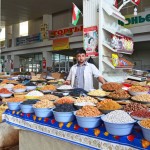 But wait, what’s going on in the dairy aisle? In a normal post-Soviet market, I would expect women (dairy vendors are most often women, don’t ask me why) shouting at the crowd and trying to sell sour cream for triple the market price. Not here. Here women are dancing and singing! Forget club Port Saïd, the dairy aisle at Shah Mansur Bazaar is the go-to place for real Tajik parties! Next time I’ll bring my teapot of adulterated vodka. As a result of all this excitement, I don’t really know what they’re selling. I can see why they wouldn’t waste their time on us — our little group hardly looked like we wanted to buy a gallon of milk to sustain healthy dietary habits. If I had to make a guess, I’d say there’s some brynza-like cheese in the buckets on the counters, and milk and kefir in the refrigerators. 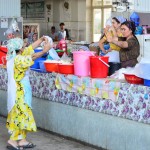 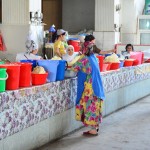 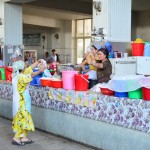 Moving on to the spice counters. Central Asia isn’t India, so the selection is limited and highly reflective of the local cuisine’s traditional seasoning: wild cumin, coriander, hot pepper, black caraway. I assume the yellow spice is turmeric, though I don’t recall ever detecting it on any of my plates. 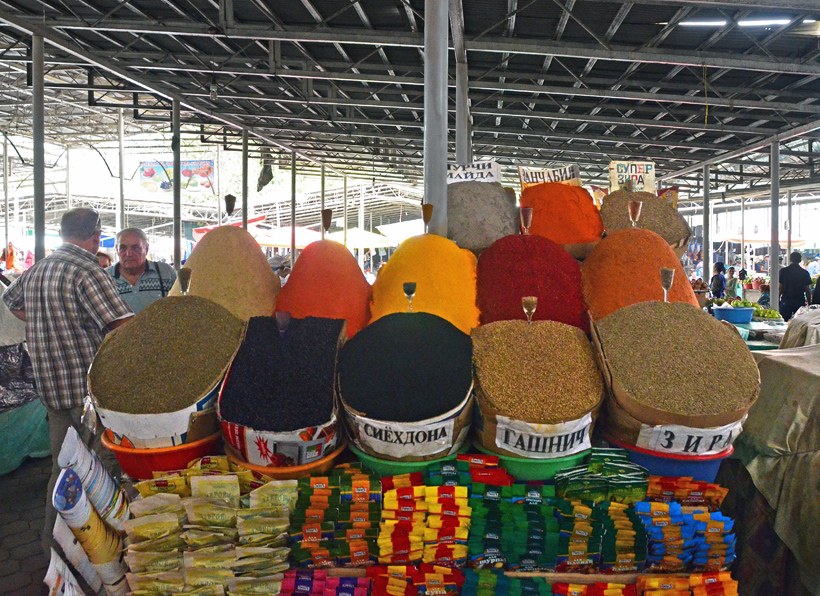 The meat is mostly lamb, of course, and I’ve already shared my opinion elsewhere on Central Asian sanitary habits. I remember seeing chicken in other parts of the market as well. 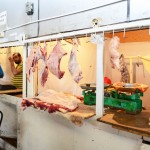 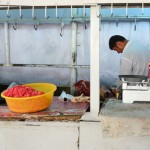 We’re heading out — as I told you, there isn’t anything truly exciting. I didn’t find any giant plov, but there are doner kebabs at the bazaar’s entrance, next to payphones that are, unlike in New York, still used by people who actually want to make phone calls, not empty their bladders or talk to their imaginary friends. 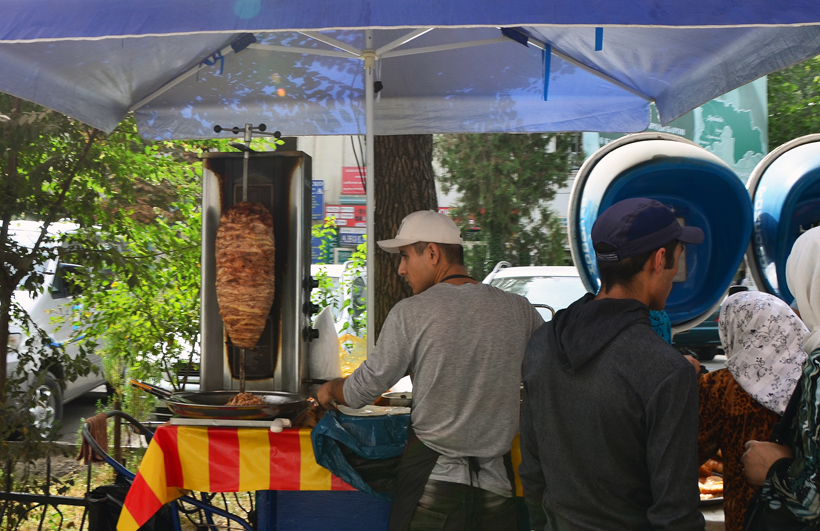 This is the end of my Tajik adventures — for now. We’ve mostly stuck to cities, and there’s a lot more to explore in Tajikistan. The Fan Mountains, with their turquoise lakes and hardy shepherds. The high-altitude Pamir Highway, for ticking a few more boxes on my list of crappy roads. The Wakhan Valley and those herders who owe me a côte de yak grilled over the fire (yeah right). But as the first season of these adventures left my traveling companions scarred for life, I must find new volunteers for extreme tourism. I promise it won’t be boring. 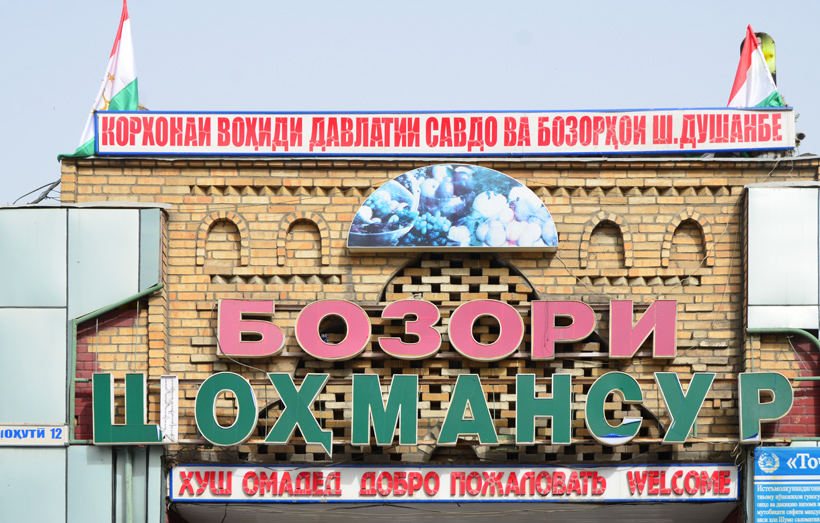