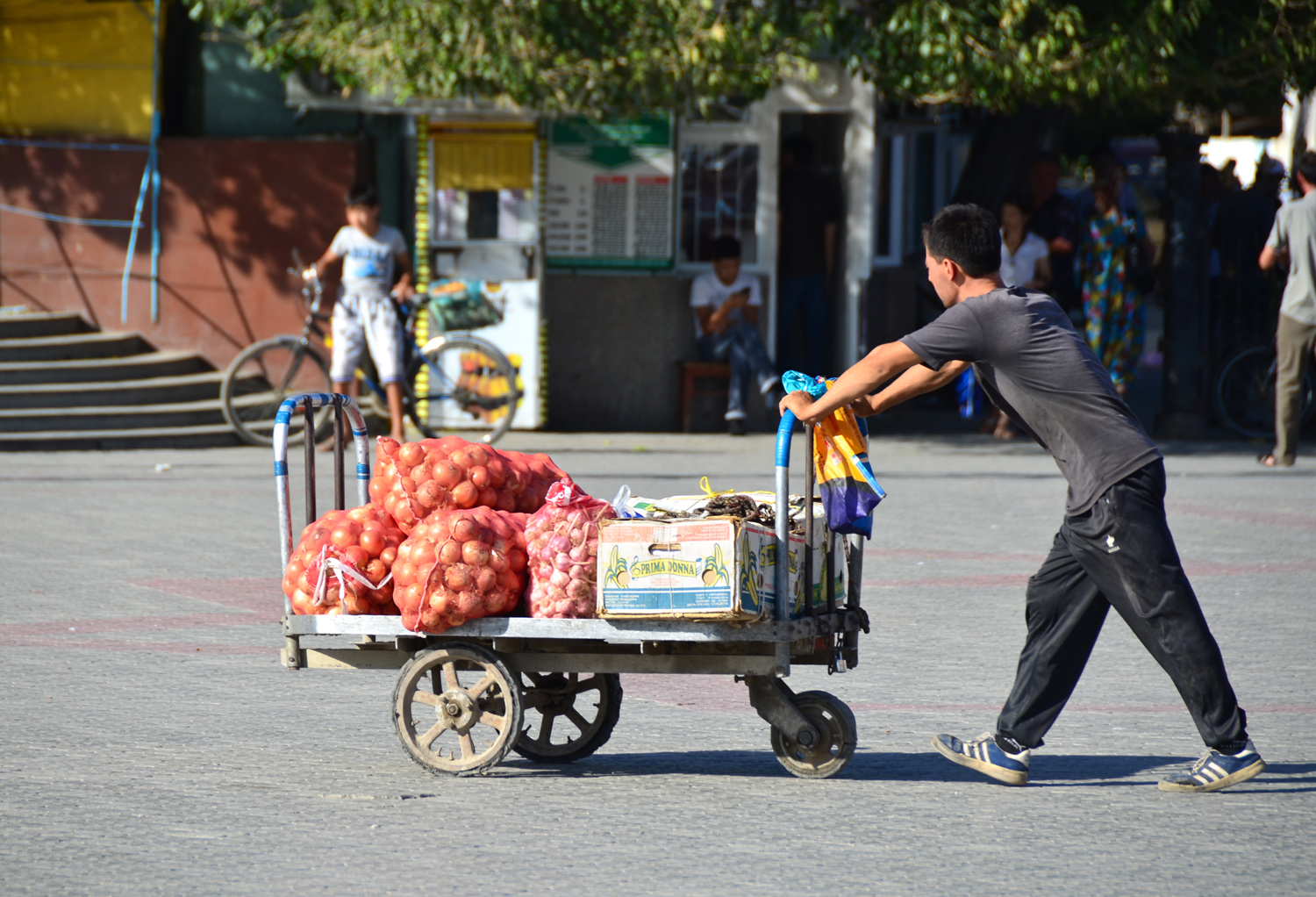 In my previous Tajik Adventures post, we looked at the more pedestrian attractions of Khujand, Tajikistan’s second largest city: decrepit hotel Leninabad, the ill-fated Lenin statue, and Café Rashvan. So far, none of these features really justify a journey to that remote part of an already remote country. Enter Panjshanbe Bazaar, regularly mentioned on lists of “Top Bazaars on the Silk Road” (like this one), and arguably the most interesting place in Khujand.

What makes Panjshanbe visit-worthy isn’t just the food (which is plentiful, but not as wildly unusual as in other places in Central Asia), it’s also the architecture. This is one market in the former USSR where the Soviets really outdid themselves in style, rather than building nondescript covered food halls. Erected in 1964, it’s been described as “Stalin meets 1001 Nights“. The combination of pink neoclassical facade, shiny statues of field workers, and a green dome richly decorated with Central Asian motives, though slightly evocative of a wedding cake, is visually emphasized by a large public square mostly clear of market stalls. 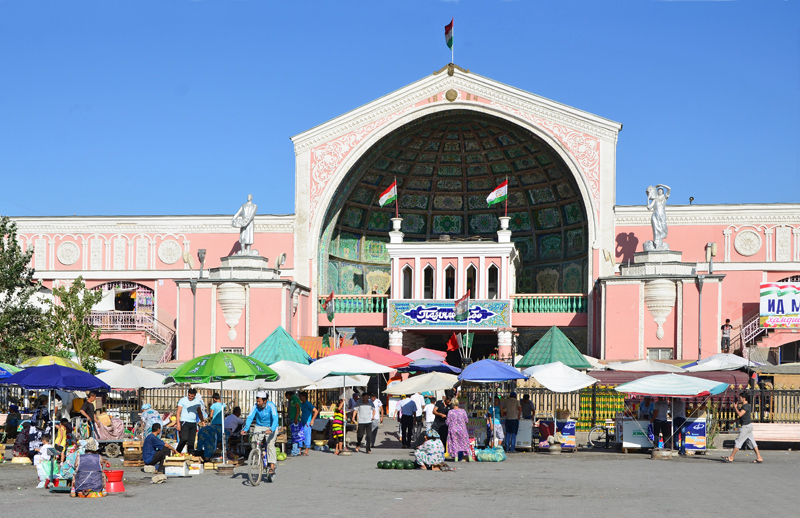 I’m not the first Westerner to discover Panjshanbe Bazaar, of course. In addition to the many pictures scattered across the Internet, this post here is focused solely on Panjshanbe and contains some interesting photos. Apparently, the facade has been repainted recently (my visit dates back to summer 2012). I also found some much older pictures on this Tajik web site: the whole square behind the WW2 monument, a view from a building across the square, the facade, and inside the covered hall, all in black and white glory, taken some time in the 1970s, I would guess. 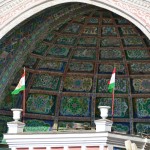 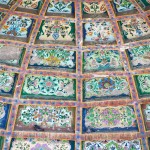 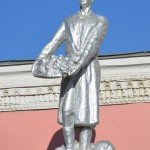 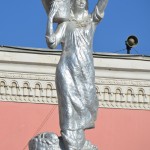 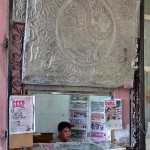 We’re getting inside the covered hall now, though we’ll be going back and forth later. The space impresses with its dimensions and its perspective, undergirded by six colonnades. It’s hard to imagine this market back in the Soviet days, and reconcile the idea of food shortages with the amount of goods needed to fill such a hall, especially for a city of only 150,000 inhabitants. 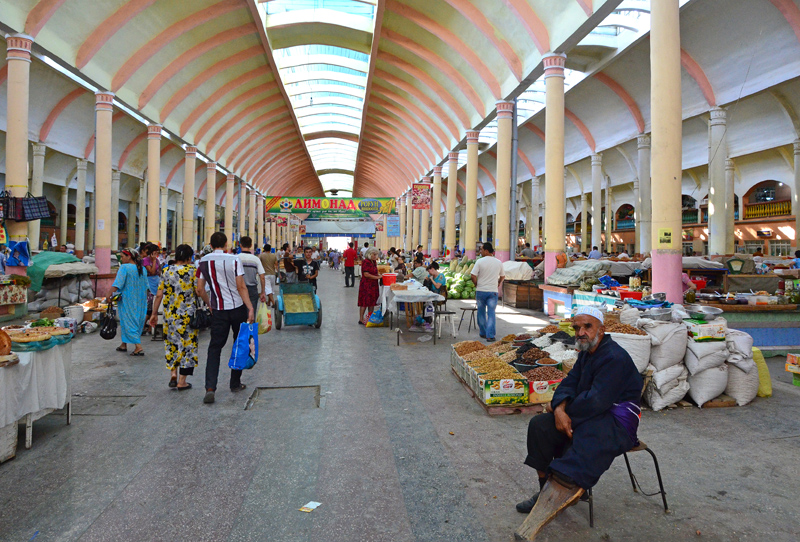 It’s always difficult to decide what to show and tell about markets. Yes, there are apples, pears, oranges, lemons, peaches, bananas, kiwis (from Iran), pomegranates, grapes, cucumbers, tomatoes, scallions, basil, dill, parsley, and probably much more. But for the most part, they look just like their siblings at your local market, and I don’t think we need more pictures of them. So let’s just acknowledge that they’re here, keep them in mind for future Tajik recipes, and move on to the more interesting bits — starting with the moderately interesting watermelons and Hami melons. Granted, you’ll find melons of all kinds on the markets of any former Soviet country, but they remain a staple of Central Asia. 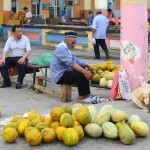 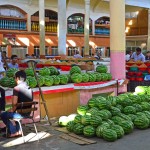 So do nuts and dried fruits. In the foreground: raisins, pistachios, almonds, hazelnuts. I think the white ones are sugar-coated almonds. 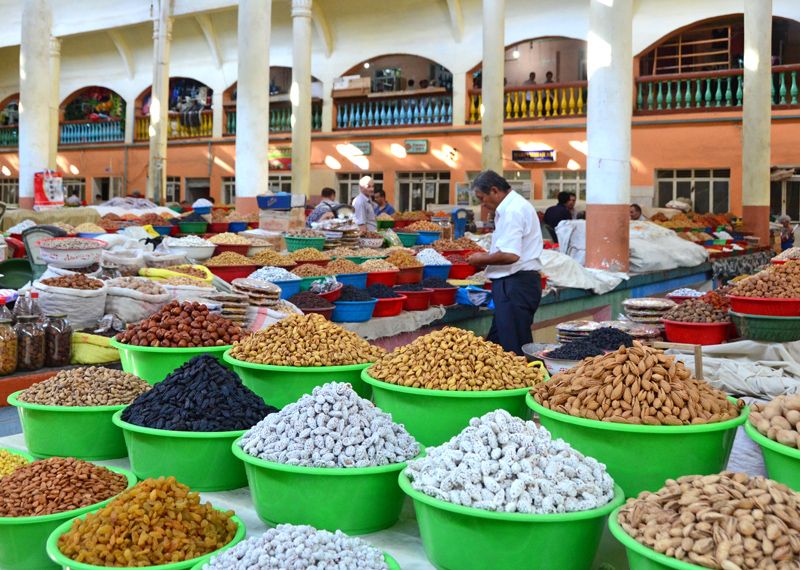 The small, multicolored peppers below are more unusual, because I don’t remember ever seeing them in Tajik meals. Maybe I just never noticed them? I can’t even tell you if they’re completely mild or slightly spicy. 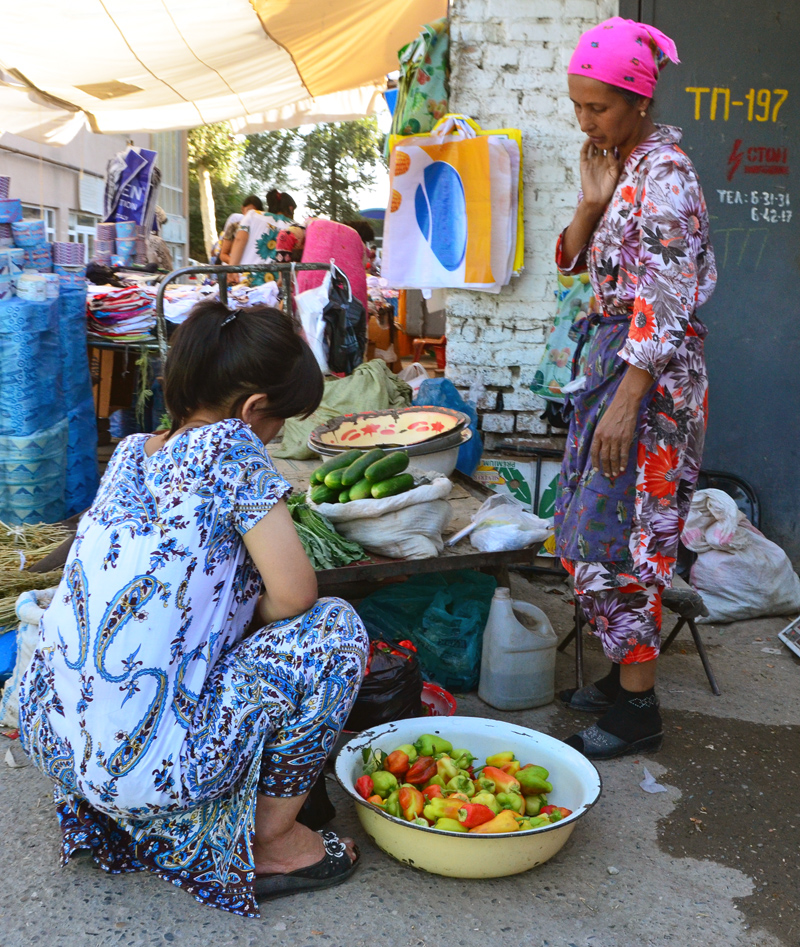 But I know at least one dish that calls for quail eggs: plov, in which they’re served hard-boiled on top of the rice. Not every kind of plov, but at least some of them, such as the one I had at the Central Asian Plov Center in Tashkent. 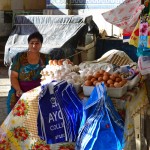 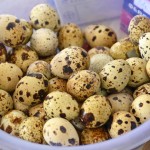 The flatbreads are pretty much the same nons as in Uzbekistan. Some of them are baked in a tandoor oven right outside of the covered hall. (If you’ve been reading this blog long enough, you might remember I’ve posted a non recipe here.) 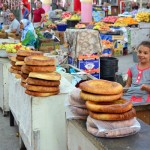 Some people think that the most extreme adventure involves climbing with one’s bare hands to the top of some tall mountain with an unpronounceable name. Or crossing a vast expanse of land in hostile conditions, on their own, on foot or in a crappy car. Well, here’s a new challenge for all the thrill-seekers; an adventure that takes place within, if I may say: buy and eat fried fish that’s been sitting in the sun all day at a market in a landlocked country with a desert climate. 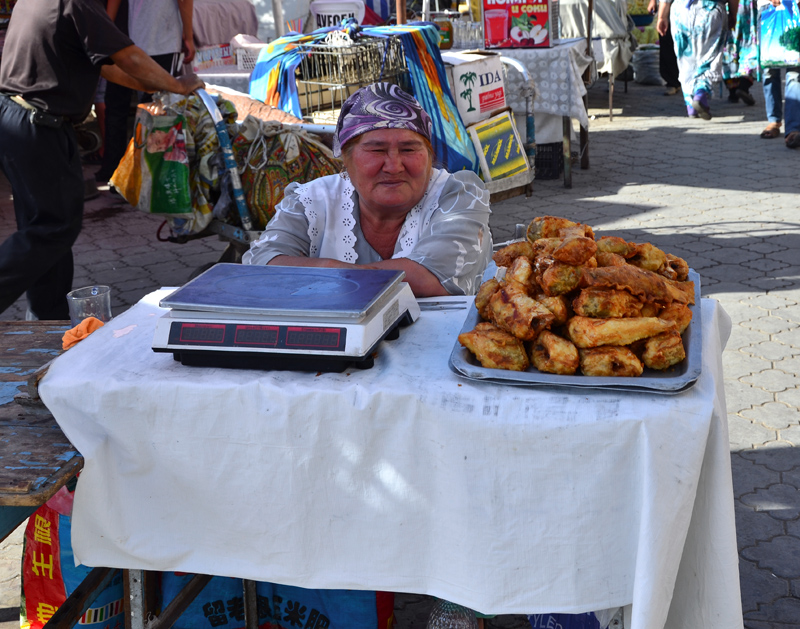 Or, try the meat. While in some crazy countries, meat is kept in dark cold-storage chambers, Tajik butchers tend to opt for the opposite approach. For tradition’s sake, maybe? Electricity is used not to power refrigerators, but to point a powerful light bulb right at their primal cuts of lamb proudly hanging from the ceiling. 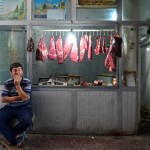 I’ve kept my favorite merchant for the end: the cow foot seller. At least that’s what he seems to be selling… I should have stopped and inquired as to what recipes he would make with them. I should have found out why he sells only the feet and not the whole animal, as, surely, there cannot be cows without feet lying around in his yard. Heck, I should have bought his whole stock of feet and asked him to cook them for us! 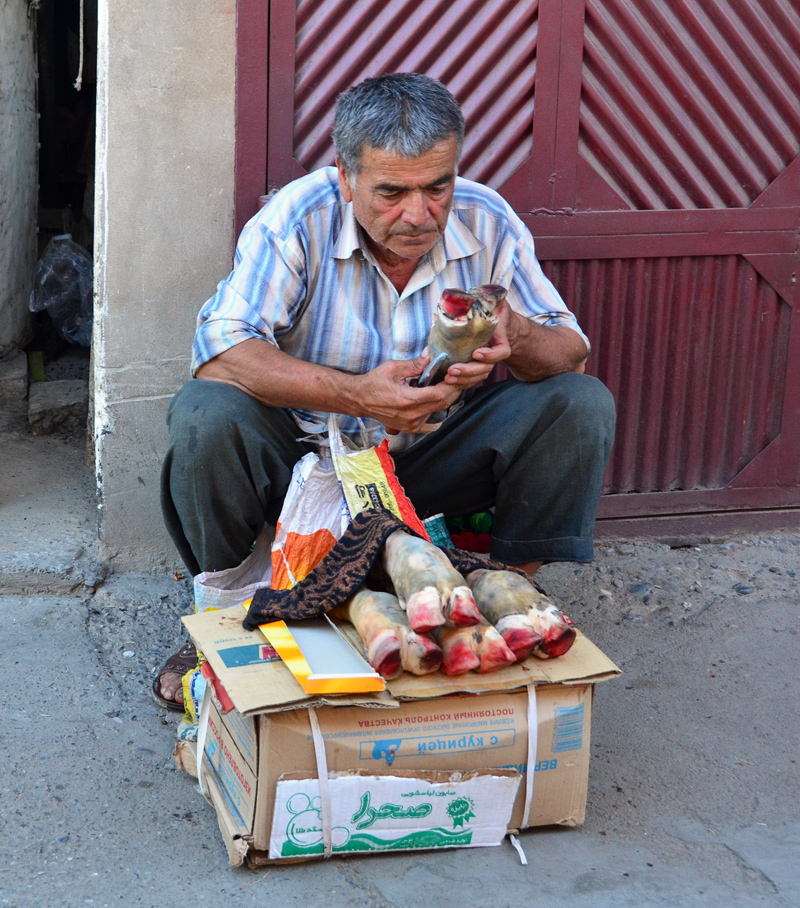 I realize I’ve skipped a few more exciting products too. Far in the backgrounds of some of my pictures, I see some qurt and various pickled vegetables — carrots, cucumbers, green tomatoes, white radishes, heads of garlic, and so on. Fear not, you’ll see them again at other markets.

And finally, for the oil nazis who think that it’s not authentic to cook this or that cuisine with canola oil as I often do, it looks like (at least some) Tajiks use sunflower oil, as you can see on the shelf in the Panjshanbe store pictured below. Now, if I were really to go only by what’s on these shelves, then the next time I make Tajik food, more than anything, I should also make sure to use copious amounts of Mentos® and industrial mayonnaise… 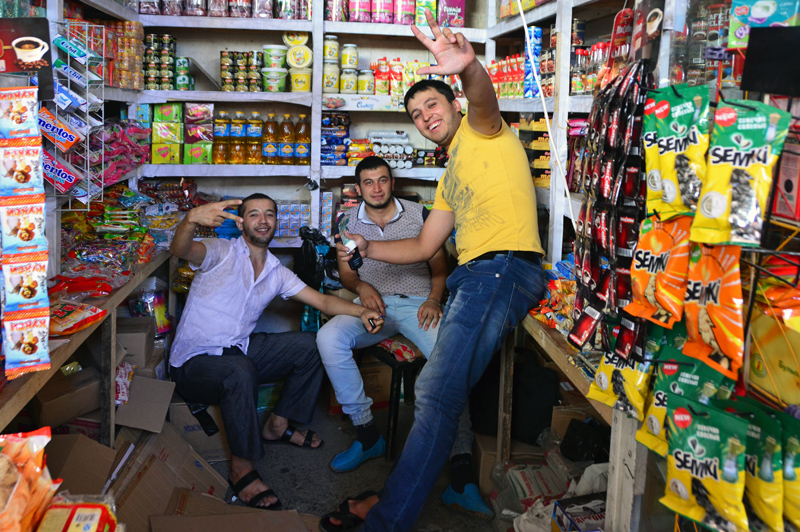 Found your blog looking for Qurutob recipes. I’m in Khujand living near the Panjshanbe Bazaar for a few months, and I just wanted to say: I really appreciate your appreciation of history, your wide knowledge, and your eye for detail! I’ll keep an eye out for cow’s feet next time I’m at the bazaar 🙂