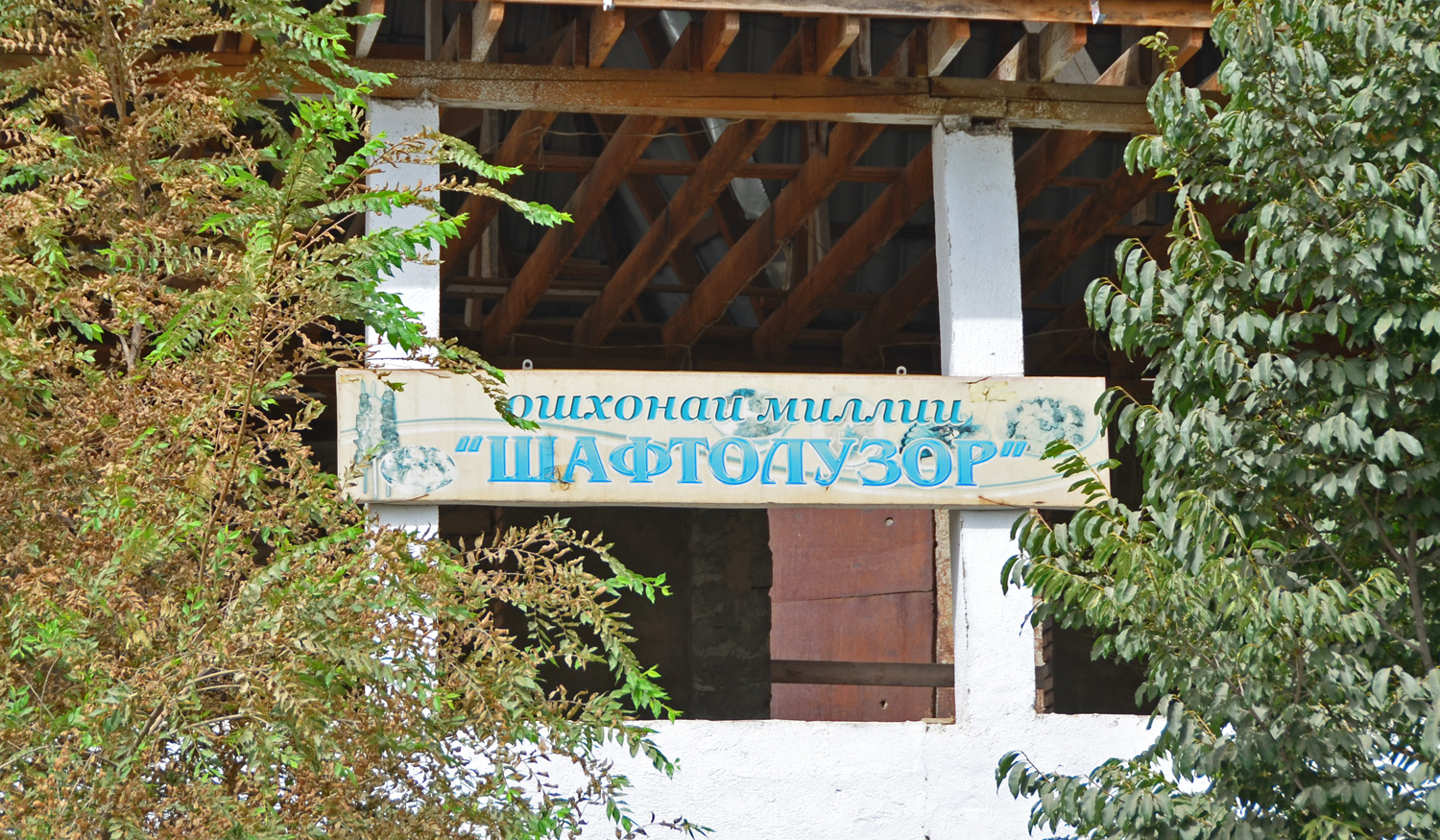 Dushanbe, population 778,500, capital city of Tajikistan. Our final stop on a journey that didn’t quite go as planned, before we cross the border back to Uzbekistan. “Dushanbe” means Monday in Tajik, allegedly because it started as a small village hosting a popular market on Mondays. When the Tajik Soviet Socialist Republic was created in 1929, the metonymy was replaced by an eponymy, and the city became known as Stalinabad. Through massive relocations, the population jumped from less than 10,000 to several hundreds of thousands in just a few decades. Dushanbe, which got its old name back when Stalin became a bad word, is a true product of Soviet planning.

Fun fact of the day: since Soviet times, Dushanbe counts Boulder, Colorado among its twin cities. While a mocking smile forms on my face as soon as I try to imagine many (any?) Boulderites making the 30-40 hour journey to Dushanbe, there’s at least one interesting Tajik presence in Boulder — the Boulder Dushanbe Tea House, an authentic chaikhana cum restaurant whose beauty is rivaled only by its fascinating history (which started with a Tajik coming to Boulder, not the other way around). The eatery features hand-carved and hand-painted ceilings, tables, stools, columns, and exterior ceramic panels. Foodwise, it looks like you can even have Tajik kebabs or a plov. Well, that, or a bunch of “eclectic” dishes from all those other countries around the world that the average Boulderite will never set foot in.

But I digress. You might remember, from my Tajik survival guide, that Oryol i Reshka shot an episode in Tajikistan. The pair had a few insightful quotes to describe Dushanbe, such as “You wouldn’t call Dushanbe a touristic capital […] but it’s one of the remaining cities in the world that’s not spoiled by globalization” and “There are few attractions, and they’re all concentrated in one place, the central square.” Quite true, overall. Touristy Dushanbe is not. And there are indeed few interesting sights, though it isn’t all bad.

As long as you don’t plan to stay there for a whole week, you can spend a very nice day visiting the capital’s main attractions and having a taste of the local cuisine. Start with a walk down Rudaki Avenue (the main artery) and its adjacent streets for a look at some notable Soviet buildings including the University and the Trade Union House.

Soon you’ll reach Friendship Square, where Soviet power meets Banana Republic bling. On one side, you’ll find the Parliament, Hotel Tajikistan, the Jomi Movie Theater, and the Tajik Soviet Socialist Republic column (apparently removed in late 2015). The emblem of the TSSR is still there, with the communist star, wheat, cotton (not artichokes, as I first thought!), and the rising sun, symbol of the new nation’s bright future.

On the other side, scattered across Rudaki Park, you’ll find the Palace of the Nation (or Nations, plural — nobody seems to know) aka the presidential palace, the statue of Ismail Somoni with its massive golden-crowned arch, the mysterious Parchan column (which despite the lack of available information is probably celebrating independence), the statue of Rudaki with its blue mosaics, and of course “Dushanbe’s true pride”, the world’s once tallest flagpole. The latter was built to commemorate the twentieth anniversary of the country’s independence, maybe in case visitors missed the Parchan thing. By proudly flying the colors of Tajikistan at 165 meters, it dethroned Baku’s diminutive 162 m previous record. But the peculiarity of any record is that sooner rather than later, someone tries to beat it. And Dushanbe’s flagpole is already only the second tallest, the tallest now being this one. Sorry Tajiks! (Previous records: North Korea and Turkmenistan. What is it with dictatorships and flagpoles, anyway?)

The Tajik’s heart is ever caught between two worlds. As a policeman confides to us, sure, it’s great to be independent, but life in the Soviet Union was the good old days (arguably not simply because he wasn’t a paunchy forty-something back then). And even if the new powers-that-be dismantle the most prominent symbols of their predecessors, the town center is still profoundly marked by the discreet charm of its sleepy, dilapidated neighborhoods, so typical of post-Soviet southern republics. The hammer and sickle may be removed, but buildings are still adorned with Soviet mosaics representing confused projects for a bright future that never got to grow as big as the trees in front of them. The cable car’s broken, but Victory Park still overhangs the city, the victory being celebrated now unclear to most.

These central neighborhoods are in the foreground of the view from our hotel. To forget the Istaravshan experience, we’ve decided to splurge. Hidden on a small street behind Rudaki Avenue, Hotel Mercury is a mansion behind high walls, complete with a fountain, deer sculptures, and an artificial waterfall. The decor, with its moldings, high ceilings, and golden drapery, is better suited for an escapade with your Tajik lover than for sharing beds with your dysenteric friends. Sadly, I hear that the hotel is now closed, a likely victim of its location on side street in a city where the locals don’t even know the name of the main avenue.

For our first night in the big city, to appease our traumatized stomachs, we opt for a taste of America, delivered to our door (again, a small miracle in a city where nobody knows the way to anywhere but the beer factory). Evidently that means fried chicken, burgers, pizza, and baklava. So much for not being spoiled by globalization. “All the flavour of the Deep South”, the containers say. South of what, we don’t know, but better not get me started on that subject. In a post-Soviet Muslim country, are ham, salami and pepperoni made with turkey and beef, or is this a “don’t ask, don’t tell” kind of thing? Eating Western food is something I rarely do during my trips, but it was a difficult day — the world’s worst hotel, the Tunnel of Death, the hospital, Tajik drivers…

Anyway, the next morning, I decide to put the whole gang back on the right track by taking us to the infamous Shaftoluzor, aka the Tajik hellhole. I’m not sure whether the place still exists, as it’s been removed from the current edition of Lonely Planet. Truth be told, except for the decor (the shell of a building under seemingly perpetual construction), the vodka (some vile rotgut served in a teapot so that Allah doesn’t see it), and the dark stares from some of the rare patrons, it’s a totally fine establishment. The food is good: the usual tomato-cucumber salad, a plov (also called osh), and qurutob, the national dish.

There must have been other traditional meals that I forgot to record. I’m gonna go out on a limb here and say we either ate kebabs or succumbed to the call of the West once more and had pizza. For the record, I would like to mention that yak herding is common in Eastern Tajikistan. Wouldn’t it be awesome to have a yak steakhouse in Dushanbe? Or at least some juicy yak kebabs?

No such luck. Travel guides don’t provide a lot of options when it comes to local cuisine. Lonely Planet‘s only recommended restaurant is Ukrainian (Traktir Konservator). All it says about Tajik cuisine is, “for cheap, genuinely local food there are several great if utterly unpretentious places on or near unpromising Loik Sherali: Sary Osyo for plov, Eyyannat for laghman and Oshi Abdurahman for kurutob.” Cheap, unpretentious, unpromising: everybody’s favorite gastronomic adjectives. Then follows a list of restaurants that apparently make it a point of honor not to serve Tajik food. But this is still better than WikiTravel, which doesn’t mention a single Tajik eatery. Given that I saw only men in those restaurants, I can start to understand the logic: one only goes out to eat Tajik food if one is traveling (which nobody does) or if one has no mother, sister, daughter, wife, or mistress. And then one ends up at Chateau Loser, drinking adulterated booze from a teapot.

Speaking of booze… Looking at Tajikistan’s alcohol production, you might think that you’re in France. The country bottles concoctions that masquerade as champagne, cahors, cognac… even Grey Goose vodka! Not patriotic enough for you? There’s Ismoili Somoni Shokhona vodka, to remind you of that massive gold crown on the central square. Try it all at your own risk: Tajik champagne kills.

And what better place to have a local drink than at the local night clubs? Options are limited, but at least one of them is famous enough to have been promoted to the rank of landmark (i.e., one of the few buildings that taxi drivers might know): club Port Saïd. A disco named after an Egyptian city. Why not? Like everything else in this post it seems, I’m not even sure it still exists. I remember looking for it one evening without much enthusiasm, and not being able to find it. Too bad, as the place really seems to have fixed itself in people’s memories. Consider these gold nuggets of wisdom from a review by one “stvcttn” on Virtual Tourist: “There is no heat in the winter so you will be partying with your coat on.” “The women dress in tight clothes and you will see men dancing together. Not a big deal, just what they do.” “I don’t like the Russian beer. I think they juice it with grain alcohol. It is filling and gives you a killer hangover. If you want real Tajik women at you[r] table, get cognac by the bottle.” “Many of the prostitutes have relatives in law enforcement so you will pay the girl at night and have to bribe the cops in the morning. If second and half world prostitutes aren’t scary enough for you, perhaps this will wave you off. ” “Go ahead and wear shorts if you want everyone laughing at you and questioning your masculinity. Women certainly shouldn’t. Despite the alcohol and prostitutes, this is still a Muslim country. Try to dress like the locals. “

I think we’ve found a new slogan for the tourism bureau here:

Tajikistan: Despite the alcohol and prostitutes, this is still a Muslim country.