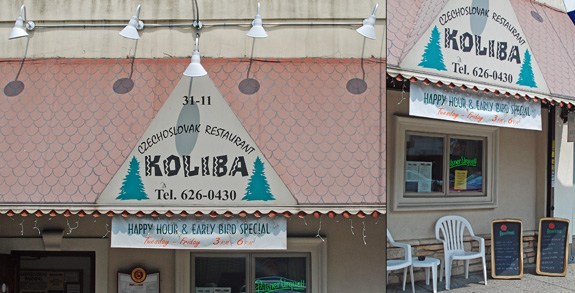 Koliba, which means chalet in Slovak, is located in Astoria, not too far from the Bohemian Hall and Beer Garden. And as you can see from the frontage, it bears the peculiarity of serving cuisine from a country that no longer exists, and even brags about it on its web site — look at that beautiful Czechoslovakia in red on the map!

The interior is decorated like a hunting lodge, with stuffed animal heads, antlers and hatchets. You’ll find more (and better) pictures on their web site, too. And while you’re there, you might as well make yourself acquainted with the rules of the house. My favorite: “Take out orders are charged extra. Prices are subject to change without notice.” 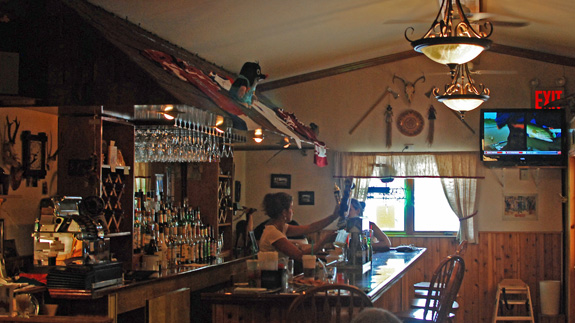 The menu, of reasonable length, lists many Czech and Slovak classics: beef stews, pork roasts, schnitzels, dumplings, halušky (Slovak spaetzle), klobasa (sausage). Before ordering, keep in mind that the portions are really huge. Judge for yourself from the pictures below, but most dishes are about double the “normal” size.

The grilled sausage was smoky and juicy, as good Czech sausage usually is. I actually wonder if Czech restaurants make their own or order them from a butcher — I would think the latter, which is fine by me. 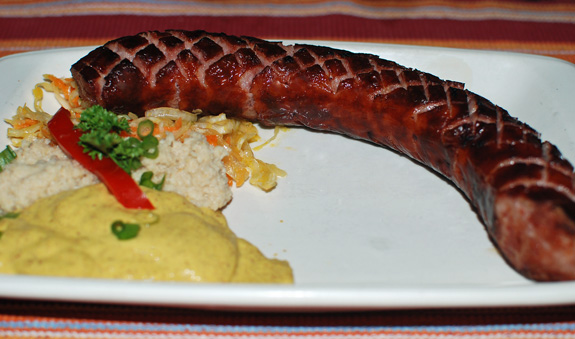 The langos arrived on a plate so large that it couldn’t fit entirely in the picture! It wasn’t bad, but the dough was a bit bland, with too much garlic and too much cheese. I would have preferred less cheese, but slightly melted. 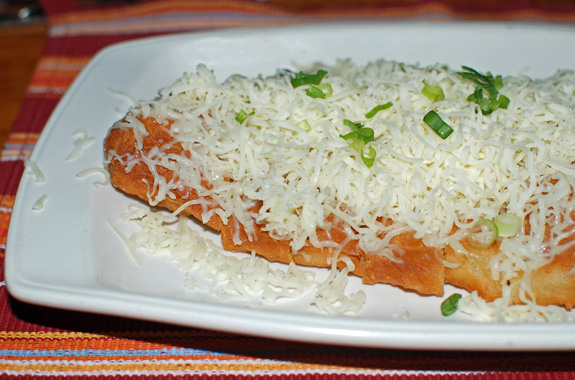 The combination pork platter consisted of roasted loin of pork and smoked pork with red cabbage (lots of it) with an order of bread dumplings on the side. The roasted pork certainly didn’t look like loin to me, but all the meat was properly cooked and tender. The traditional dumplings played their sauce-mopping role to perfection. 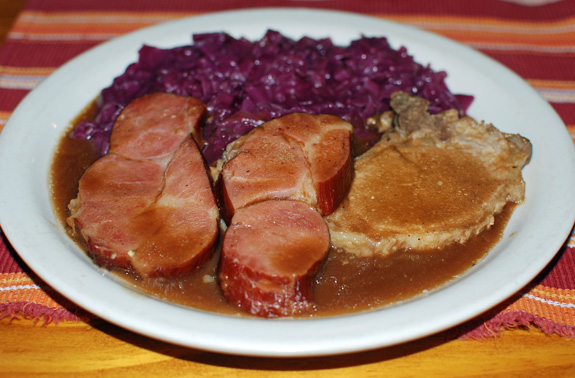 The pork schnitzel (or schnitzels rather, since one portion includes two generous pieces) looked a lot like a chicken schnitzel, but was bland enough that we might never find out the truth. As is often the problem with schnitzels, it was rather dry. The dish could be significantly improved simply by adding some butter while frying, and serving it with an egg on top, and I don’t care if it’s not “the way it’s served in Czechoslovakia”! At least the fries were crispy. As for the under-ripe tomato and other tired vegetables, I’d like to shake the hand of a diner who actually eats them all. 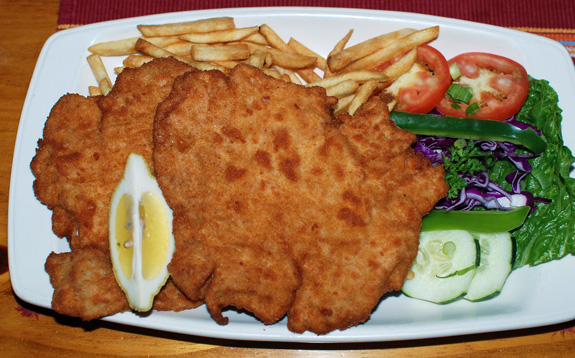 The halušky, potato spaetzle with sheep’s milk cheese and bacon, were borderline inedible. First, the spaetzle looked liked giant greenish-greyish gnocchi and tasted rubbery and undercooked. Then there was the monstrous cheese sauce. Sure, it looks close enough to the reference picture on Wikipedia, but this is just an illusion. I certainly don’t remember eating anything that gross in Slovakia. To be fair, the bacon was good, but this just wasn’t enough to redeem the dish in any way. 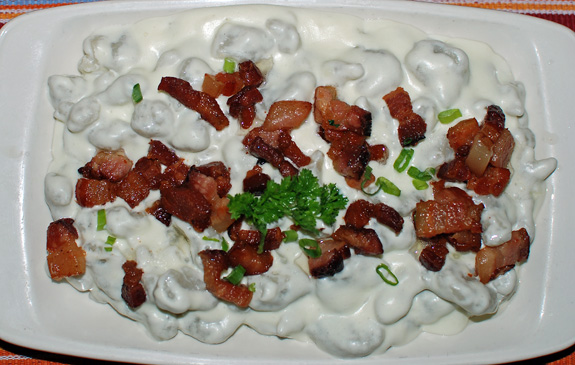 The leftovers, minus the halušky that went straight to the trash, fed us for another meal and a half. I can only regret the quality didn’t always match the quantity. Oh, and if you’re one of those individuals with a special dessert pocket, they serve home-made štrúdl and crepes.