Save for a handful of Austrian and German joints, Central European cuisine has become pretty scarce in Manhattan. Enter Doma Na Rohu, in the West Village, whose name means literally “at home at the corner” in Czech. Opened in 2012 according to its Facebook page, the place calls itself successively a “neighborhood restaurant featuring the best comfort foods of our German / Czech / Hungarian grandmothers”, an establishment that “politely says, Nein, danke, to fusion food”, and “a space that is at once Old World and True Village, physically just a block west of now all-American Bleecker, but figuratively – mystically – worlds and years away”. You gotta love people who write True Village with capital letters and a straight face! But if everything was so much better in days of yore, will Doma Na Rohu be able to transport us, with its wood-heavy decor and mismatched furniture, back to that golden age when Eastern European immigrants, poor in dollars but rich in traditions, cooked honest food that could only be perpetuated by categorically refusing sous-vide pouches and thermometers? We shall see! 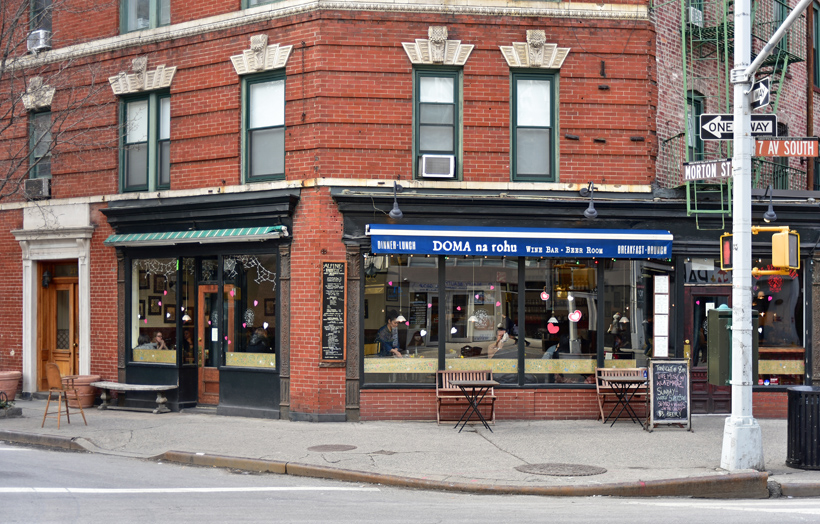 The menu is indeed a mix of German and Czech specialties. It features sections dedicated to cured meats and cheeses, sausages (9 kinds, no less), salads (only 3, and 2 of these have meat), beef and pork (smoked, grilled, stewed), fish (choose between salmon and mussels; this isn’t a seafood restaurant), schnitzels, fowl (roasted chicken and duck), vegetarian (burger or spaetzle), sides (mostly potatoes, cabbage, and “dough products”), and desserts. And true, you’ll find a hint of Hungary here and there — Hungarian salami and lecso. And of course, there’s a beef burger.

The restaurant serves breakfast, lunch, brunch (on weekends), and dinner. The lunch menu eschews some of the dinner dishes but adds a sandwich selection, which often re-combines evening menu items (brisket, salmon, duck) between two slices of bread in creative ways. Breakfast comes with the expected collection of eggs, french toasts, pancakes, and sausages, sometimes (though rarely) with an Eastern twist. Weekend brunch, which differs from breakfast only in very subtle ways, doesn’t supersede lunch, and I commend this — there’s nothing I hate more than going to a restaurant that looks interesting, only to find that all they serve is stupid egg dishes because it’s Sunday. 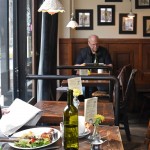 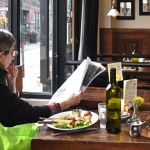 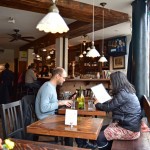 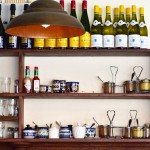 Like Kafana brings bread with ajvar to begin one’s meal, Doma Na Rohu serves some fresh country loaf bread with a ramekin of lecsó (both of which you’ll see again in my brisket sandwich below). The lecsó is a thick, chunky, Hungarian vegetable stew, with hardly any liquid at all, consisting of red and green peppers, onion, and probably tomato. We’re off to a good start.

Toast the bread in a greased pan, spread the lecsó on top, add some brisket and gouda, and you get the smoked brisket and gouda sauce sandwich. The tender brisket emits a pleasant smoked scent, but it could be cooked at a slightly lower temperature (as is, it’s almost more stewed than smoked). The gouda is there but not at all prominent; there could be a bit more of it. Overall, this a very satisfying sandwich. 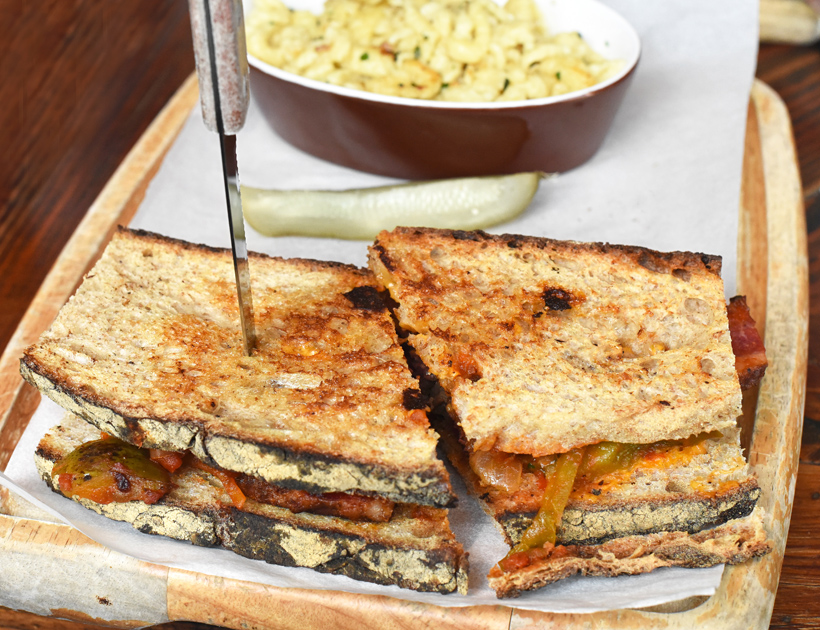 The nine sausage options range from the something-wurst to various game meats. The bratwurst, made with pork and beef, tastes mostly like pork and smoke. The juicy texture seems to imply an emulsion with added coarser chunks of meat and fat. The kielbasa is slightly less smoked and a bit less moist (though not dry by any means). Both are pretty standard but well made. They come with two kinds of mustards, one good German-style whole-grain mustard, and one honey mustard with a funny, unpleasant taste. 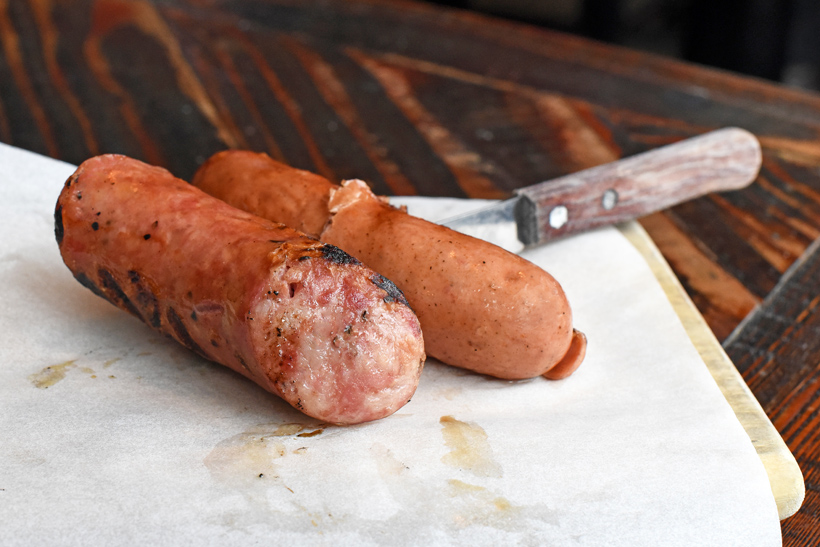 The airy spaetzle, sautéed in butter and sprinkled with parsley, would make a great side if they didn’t completely lack salt. They can also be ordered with cheese (a Swiss kind, grated in generous amounts) to create Germany’s answer to mac and cheese. 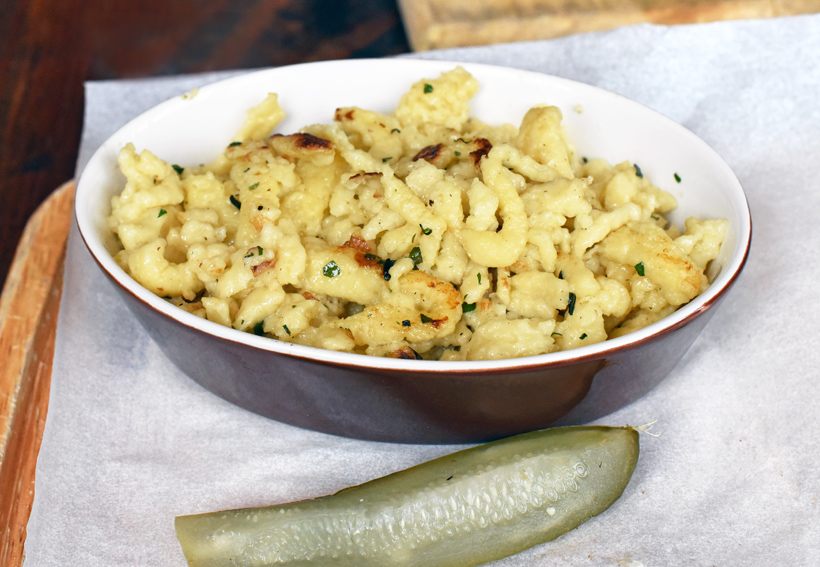 The excellent beef goulash is prepared in the German / Czech style (as opposed to Hungarian gulyás, which is more like a soup), with more caraway than paprika. The beef, from the top round, is lean and tender. The thick, rich sauce doesn’t contain a whole lot of vegetable chunks, probably because they mostly disintegrated during cooking. I can detect onions and tomatoes, but I’m not sure there are any red peppers. The goulash comes with a whole bowl of knedlik (bread dumpling) that you’re supposed to use to mop up the sauce. The knedlik are very plain, not salted, and a bit doughy (though not as dense as many I’ve seen elsewhere), but that almost seems like a desirable set of properties for something that’s merely a vehicle for sauce. Except… there isn’t really any goulash sauce to mop up! There’s only enough for the meat. Instead, you get a small pitcher of some random gravy (chicken and vegetables, no salt). What’s the point of serving extra sauce on the side if it’s not the same as the sauce used in the main course? 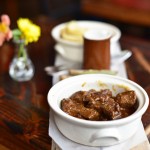 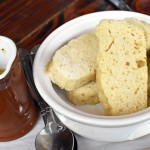 So far I’ve been discussing the lunch menu. Now dim the lights, we’re switching to dinner!

And we’re starting with the day’s special, mushroom pierogi with fried onions. You may only get three dumplings, but they’re massive. Bigger than any pierogi I’ve ever seen. Add to this the facts that their dough is quite thick and that they’re pan fried, and you’ll understand why the dough ends up being tough and significantly undercooked. In fact, one of the three dumplings was still stone cold in the center. Too much dough also means you can barely taste the mushroom-and-cream filling. There are a few more elements garnishing the plate. Fried mushrooms and onions on top of the pierogi, finished with a spoonful of sour cream and a sprig of dill, taste great. A piece of pork belly on the side, which seems to serve little purpose other than giving the finger to vegetarians, is tough and dry like it’s been fried for too long — be careful not to chip your tooth on it! Also on the side, there’s some kind of whipped cottage cheese that has a funny taste. Definitely not a dish I’d recommend. 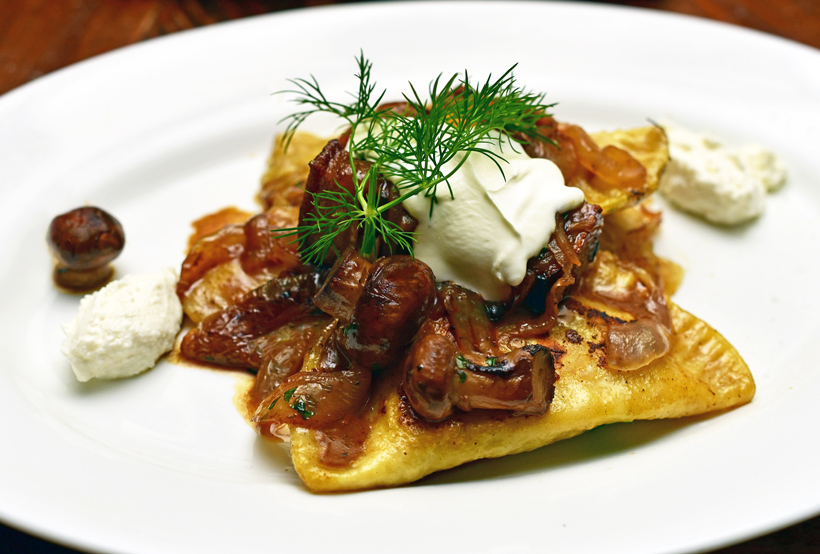 The veal schnitzel doesn’t fare much better. The meat is pounded thin, which is normal for a schnitzel, but its then fried in an excessively thick coating of coarsely ground breading.  As a result, it’s very dry, and even the melted butter doesn’t help much. There’s also no salt at all. The preserves (red currant?) served in a ramekin on the side are very good, but they don’t save the dish. If you decide to order it anyway, make sure to lift the schnitzel before eating it: there’s a small, hidden bed of capers underneath! I love capers and I want to eat them with my schnitzel, not after I’ve finished it. 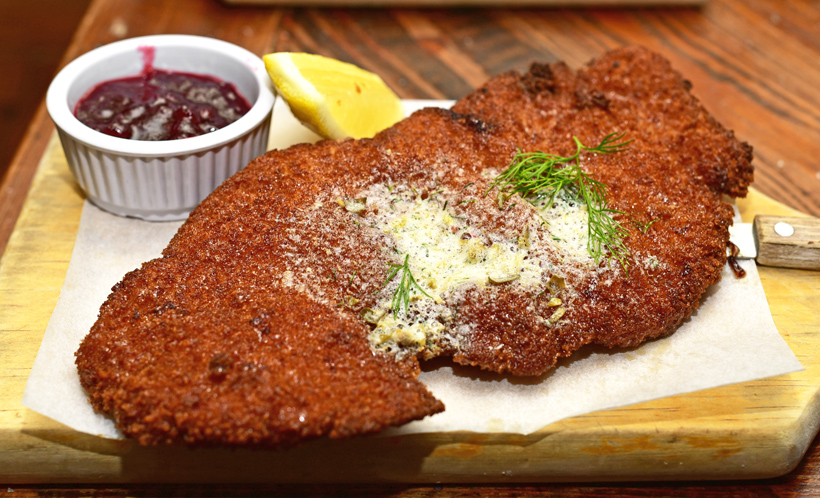 The roasted duck, a Czech classic, can be ordered whole or by the half. This is a difficult dish to make in a restaurant: first it most likely has to be par-cooked ahead of time, then the optimal cooking temperatures for the breast and the leg differ considerably (even more so than with chicken, where the whole bird is cooked well done). So it comes as no surprise that here, the breast is overcooked while the leg is barely cooked enough, resulting in their both being somewhat tough. On the bright side, the skin is crispy, and this is not a very greasy duck, which is a rather good thing — duck meat in the US often comes from the same fowl used to make foie gras, so you can imagine how much fat they have. The gravy, as with the goulash, seems to be prepared from totally different ingredients such as barley, carrots, and chicken stock, and I’m still not very fond of it. Didn’t this duck have a neck and a carcass they could use to make stock? They could even throw the tough wings in there. Yet any gravy is sorely needed to make the breast meat a bit less dry. Overall, the dish is so-so, neither bad nor good. 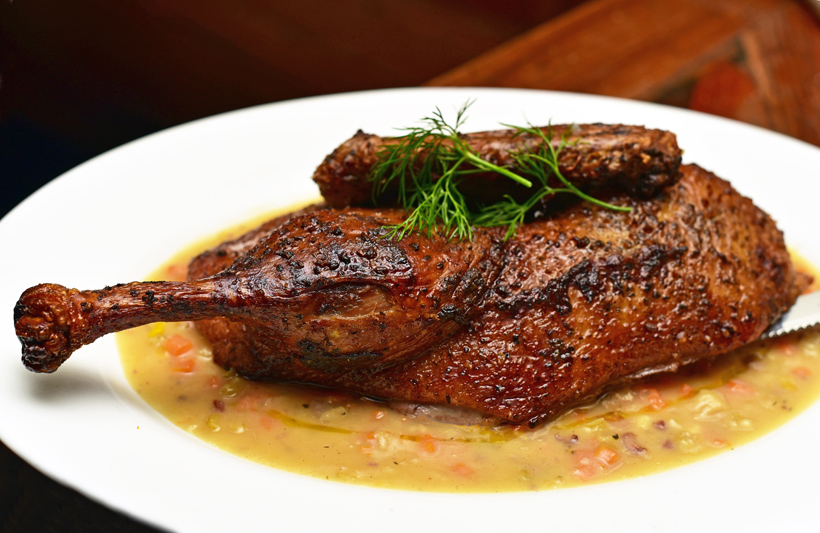 The potato pancakes, aka latkes, are of the grated potato and onion variety. They’re a little bit dense but otherwise quite good, topped with sour cream, dill, and cooked apple with cinnamon. 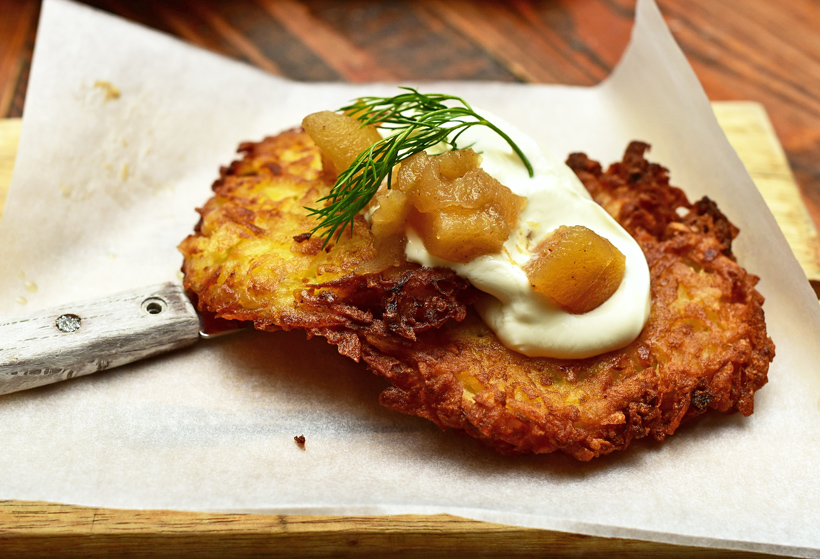 Dessert time! The list is short but all homemade. The apple strudel is much more than just apples in layered pastry. From what I can tell, the filling actually contains apple, raisins, a lot of almonds (both slivered and in a kind of frangipane paste), a hint of cinnamon (just the right amount), and possibly some candied fruit like candied orange peel. Whatever this rich mixture really consists of, it’s very successful, the flavors reminding me a little of a Christmas pudding — with apples. The dough is very crispy, almost like puff pastry. The dish is served with homemade whipped cream and a caramel sauce that tastes a bit funny (which is my word of the day, apparently; I wanna say it tastes burned, but I’m not at all sure that that’s what it is). 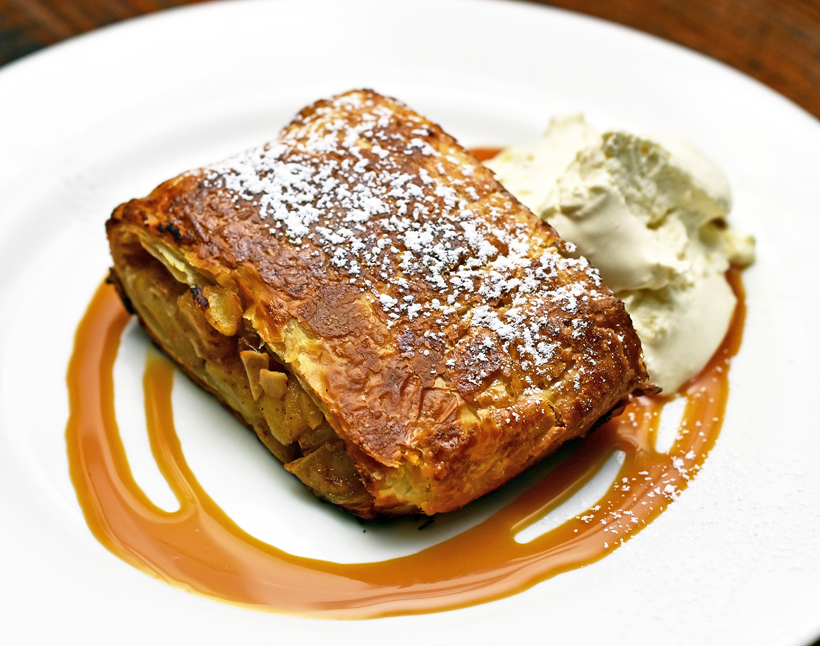 The Nutella bread pudding is more like some kind of warm bread pudding topped with Nutella and whipped cream, and that’s fine. It’s very good and not too sweet, crispy outside and very soft inside. I quite like the contrast between the bread, which is only ever so slightly sweet, and the Nutella, which is over 50% sugar. The texture of the pudding is interesting too, almost more like French toast. 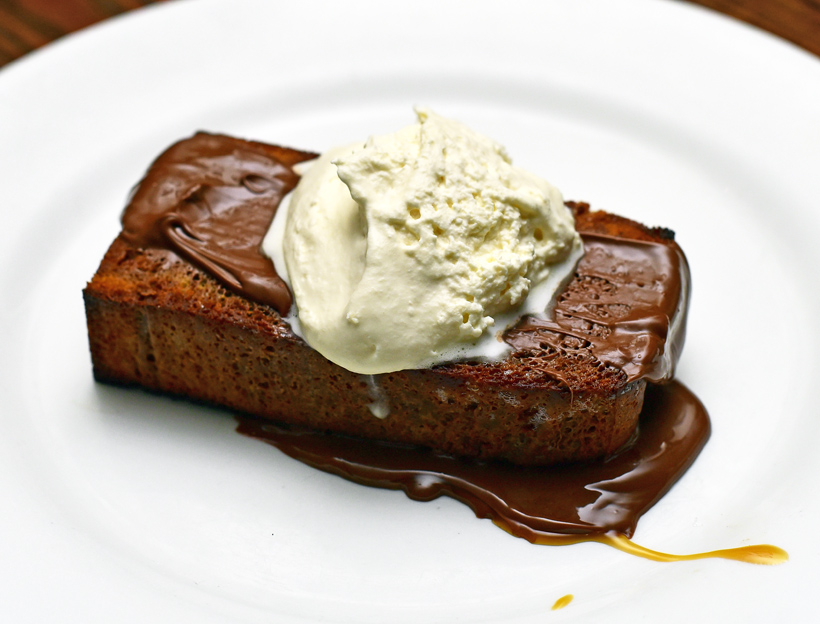 You can wash down your meal with wine or beer, and the restaurant even calls itself a wine bar (or so says the awning). But this doesn’t seem to mean that they serve a particularly interesting or well-curated selection of wines, just that they have a bar counter where you can knock back a glass of vino. That same bar counter does not serve liquor, only wine and beer.

Evenings see various activities depending on the day of the week: live music on Saturdays and some Wednesdays, board game nights on Sundays and Tuesdays, drawing club on Mondays. There are also pig roasts every month and wild game dinners every once in a while. Service is normal (nothing special to report) and the prices are very reasonable.

As far as the food goes, my two visits to Doma Na Rohu went very differently. Lunch was surprisingly excellent, with very little to pick on. It certainly beats Eggs Benedict any brunch day. Dinner, on the other hand, was marked by a series of savory dishes ranging from moderately successful to seriously failing. Did we just happen to go there on a bad night? There has to be more to it than this, as some of the problems seem to come from the choice of recipes, not just the execution. For example, that weird random chicken gravy must go. And that pierogi special must go too — if anybody’s grandmother used to make pierogi like that, she must have had dementia. The desserts, however, are yummy. Maybe this is what True Village is supposed to mean: sandwiches, wine, and desserts? 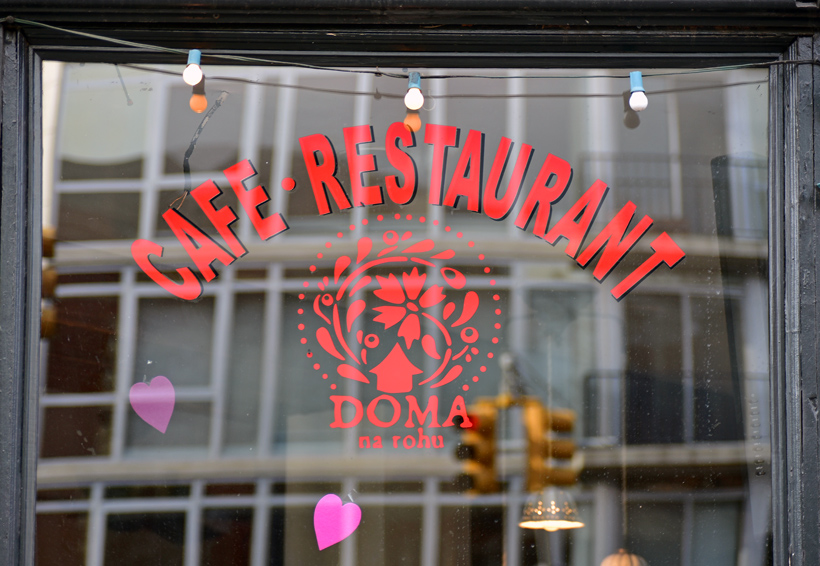