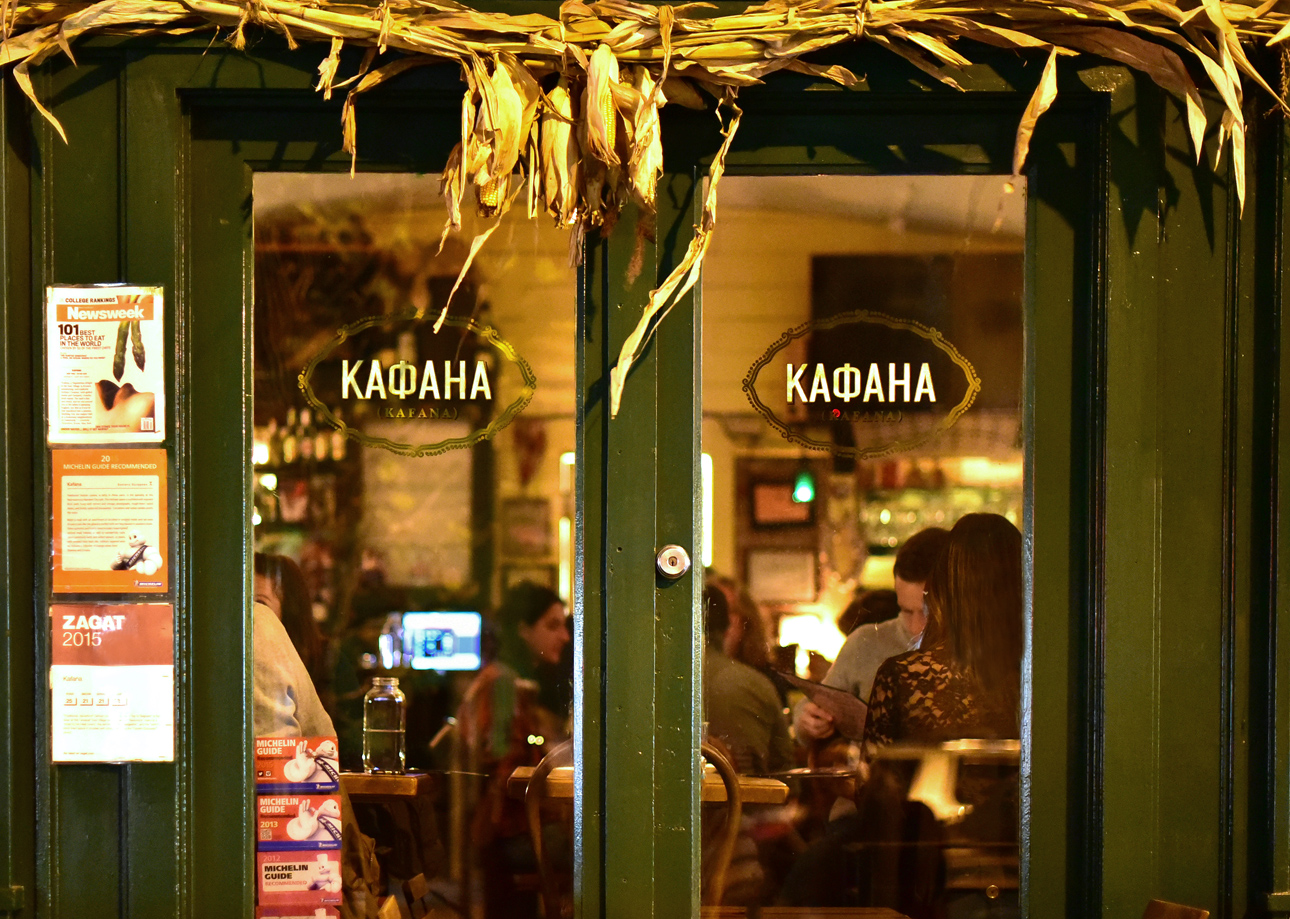 It’s hard to believe that Kafana has been serving Serbian food in the East Village for eight years now. I still remember going there when it had only just opened, the first Serbian restaurant in New York City, as it claimed. I’ve returned episodically since then, but it’d been several years since my last visit.

As far as I can tell, the decor hasn’t changed much. The room is speckled with Yugoslav memorabilia, the very New York exposed brick walls are decorated with old black-and-white postcards, and the banquette seating is upholstered in cloth printed with what must be traditional patterns. It’s also been a while since I’ve been to a place with tables so small. I can’t quite figure out if today’s New York restaurants have transitioned to normal-sized furniture, or if I just stopped going to eateries where you have to calculate every gesture lest you knock over somebody’s glass. 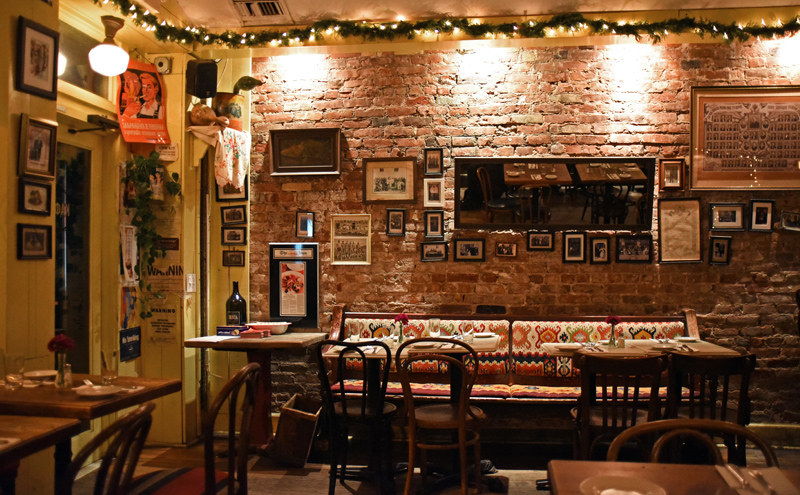 Even though I managed to photograph the restaurant while it was empty, don’t think that’s its usual state. The dining room filled to capacity during both of my recent visits, and reservations are recommended. And now, before reading my facetious review, listen to owner Vladimir Ocokoljic introduce the restaurant himself. Beer bottle in hand, Vladimir warns you: he’s not trying to make fancy food. I guess he must not have felt the same reserve when he put Vodopivec‘s Vitovska Anfora and Gravner‘s Rosso Riserva on the wine list, but we’re all entitled to a little celebration every once in a while, no?

Let’s seize this opportunity to review New York’s extant Yugoslavian gastronomic landscape for a minute. There are many Bosnian restaurants in New York, especially in Astoria (I need to go investigate soon). I recently reviewed a handful of Kosovan restaurants in the Bronx (see here and here).  You’ll find a vaguely Montenegran joint in Hell’s Kitchen, and a Croatian restaurant in New Rochelle, of all places. And there used to be a Slovienian café in Sunnyside. But when it comes to Serbian food, Kafana, which means café in Serbian, still seems to be the only game in town. 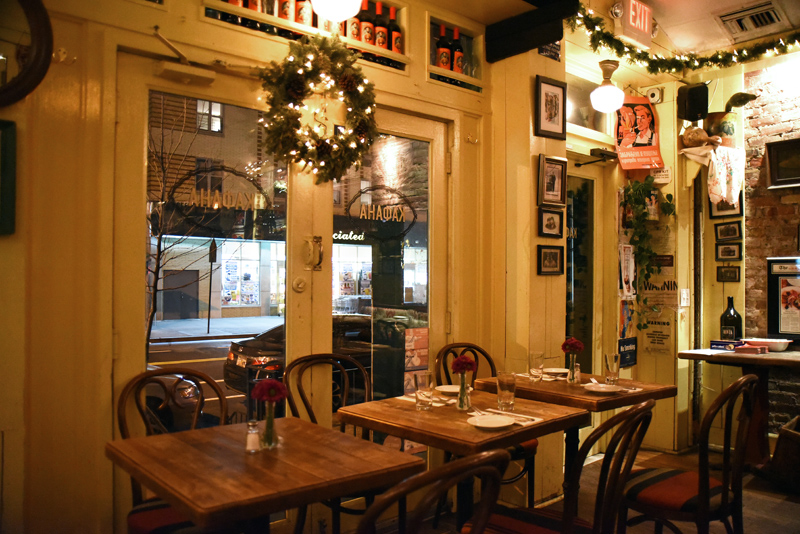 Serbian cuisine shares a lot of dishes with the other cuisines of former Yugoslavia: ajvar, lepinja, gibanica (which is similar to burek), ćevapi, pljeskavica, kajmak, baklava… But what makes it different is its love for all things pork. At Kafana, out of the 16 main courses, this little piggy makes its way into 11 plates. It comes grilled, braised, cured, smoked, ground, or stuffed in sausages. Don’t like pork? There are a few lamb and chicken options. Vegetarians have half a dozen salads (featuring tomatoes, cucumbers, cabbage, beets, red peppers, romaine, etc.) and a few appetizers (phyllo pastry pies, cheeses) to choose from. Serbia being no Croatia, piscivores can only choose between fried anchovies (which I wish I’d tried), smoked trout, and the grilled fish of the day. As American tradition commands, we start the meal by stuffing ourselves with bread. The fresh country loaf is served with a little ramekin of ajvar. Kafana’s version of the latter seems to be made mostly with roasted red peppers, blended into a creamy spread with small chunks. 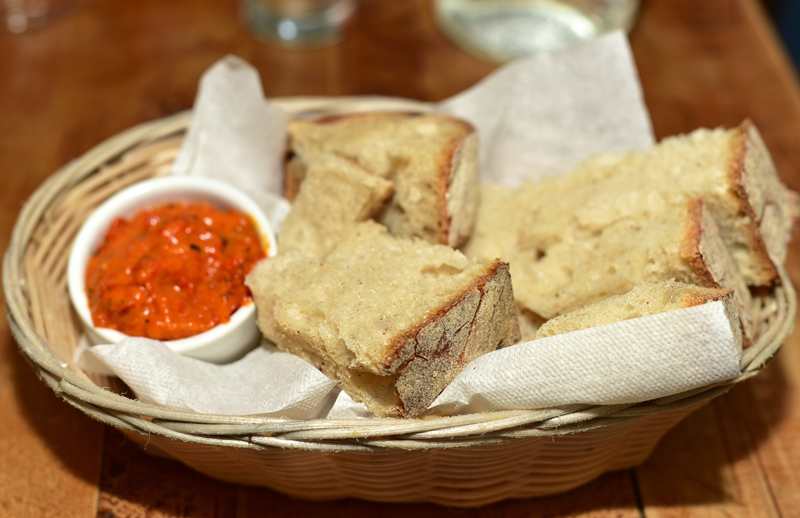 More bread. The lepinja with kajmak is like a simple flatbread sandwich. The grilled lepinja is pretty similar to a pita, with the same texture but slightly thicker. It’s sliced and then spread with a bit of kajmak, a mild, creamy cheese. Optionally, you can add slices of cold-smoked pork, a bit like speck but very smoked. If the kajmak is boring on its own, it does go well with the smoked meat. Simple but good. 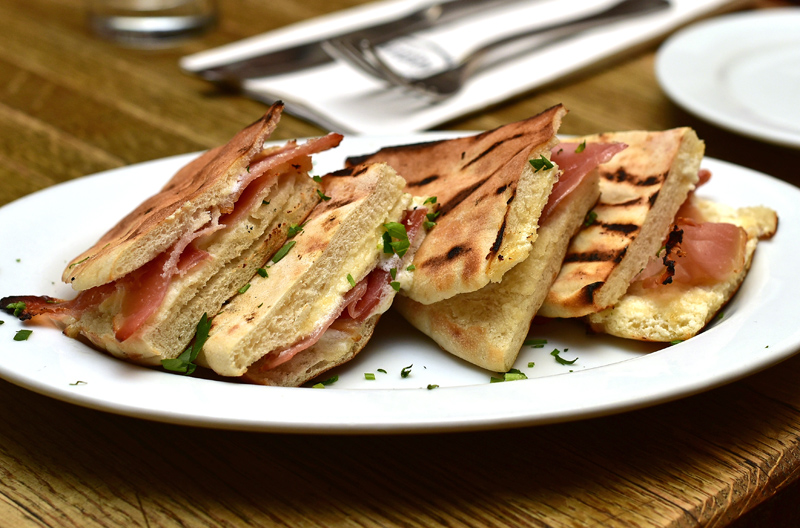 The gibanica is a cheese pie that reminds me a lot of burek, at least the way it’s prepared here, with layers of homemade phyllo dough and brynza. But there are more layers, so the pie is thicker. It’s definitely a copious portion size for an appetizer, and can pretty much feed two people. This behemoth is served barely warm. While the thin top layer is pleasantly browned and crispy, the dough inside is very thick, and there’s not a lot of cheese — definitely not enough to my taste. I must say I prefer the cheese pies from Dukagjini Burek. 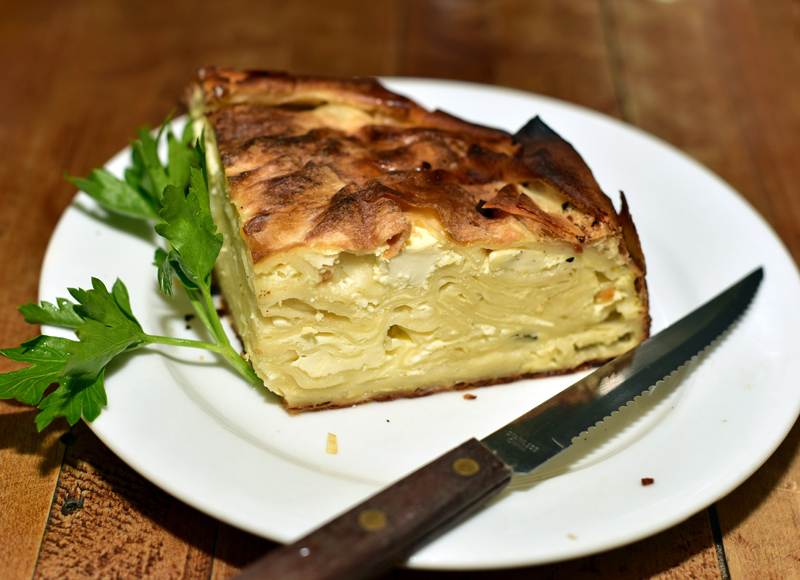 The mešano meso, mixed grill for two, is a good way to try many of the menu’s pork specialties in one meal. The only problem is that some of the tables are so small you can hardly fit the meat platter and two plates!

The ćevapi look like little grilled skinless sausages. They’re made with a mixture of ground pork and beef with onion (all the parts of former Yugoslavia make ćevapi with different meat blends). The result is very good, very juicy, well-seasoned, and less spongy than many versions I’ve had elsewhere.
The dimljena vešalica, thinly sliced smoked pork neck, is just OK. It’s not bad, but it’s a bit overcooked and dry, and not all that tender. I don’t really recall it tasting smoked, but maybe it’s my mistake. 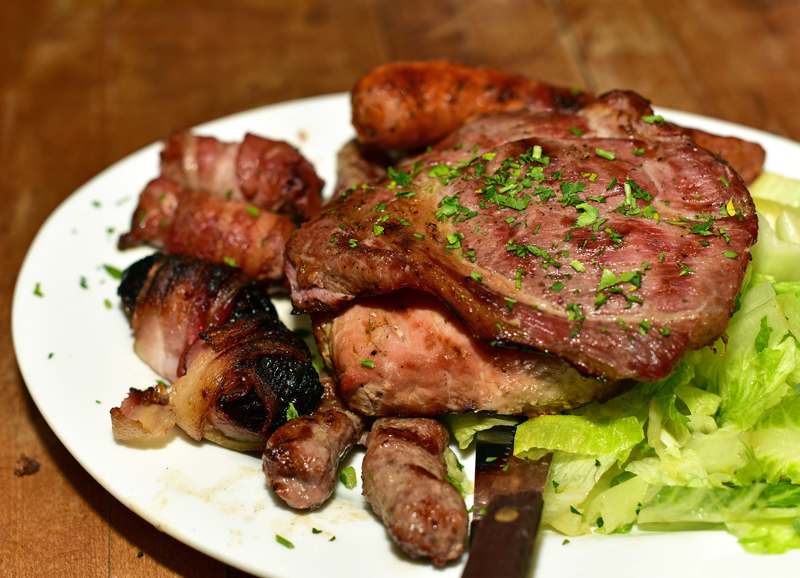 The krmenadla is a grilled bone-in pork loin chop (the equivalent of a T-bone). Unfortunately, the nice charred flavor doesn’t compensate for the fact that it’s dry and not very juicy, both because it should be cooked less and because the meat is quite lean.
The kobasica (sausage in Serbian) comes in three choices: seljačka (literally peasant sausage, made with pork), zlatiborska (Zlatibor-style sausage, made with pork and lamb), and ljuta (hot sausage, made with pork and spices). My choice, the ljuta, is indeed quite spicy in places, and also smoked. It’s got just the right amount of fat for an excellent sausage.
The rolovane suve šljive i dzigerica is, as every Serbian speaker will tell you, rolled prune and liver. This still requires some explanation. Firstly, they’re rolled in bacon, not under one’s armpits. Then you get either a prune rolled in bacon, or a piece of liver rolled in bacon — it’s a surprise! Both iterations are very classic. The prune is stuffed with walnuts and cheese, and the sweetness goes well with the various meats on the platter. The chicken liver seems to be ground and mixed with spices, which solves the problem of liver being tough if it’s cooked too much. Rustic but well done.

By default, the mixed grill comes with an uninspired salad of chopped lettuce and some sort of vinaigrette, but you can also order your own sides: fries, grilled vegetables, mashed potatoes, or Swiss chard with potatoes. The prebranac is almost like a bean purée. It consists mostly of beans, plus a generous amount of onion, and maybe a bit of tomato. The flavor profile is similar to the groshë I encountered at Gurra Café, but groshë (Kosovan) / pasulj (Serbian) is more like a thick bean soup, and here there’s really no liquid at all. The beans are very mushy; some whole, some broken down. It’s not quite what I imagined — I was picturing something closer to a cassoulet, without the meat — but it’s good. Optionally, it can be served with any of the aforementioned sausages, an offer that’s too good to pass up. My smoked lamb and pork sausage (the zlatiborska) tastes really good, even though the meat’s a bit compact. Compared to the other main courses on the menu, this is a relatively small portion. 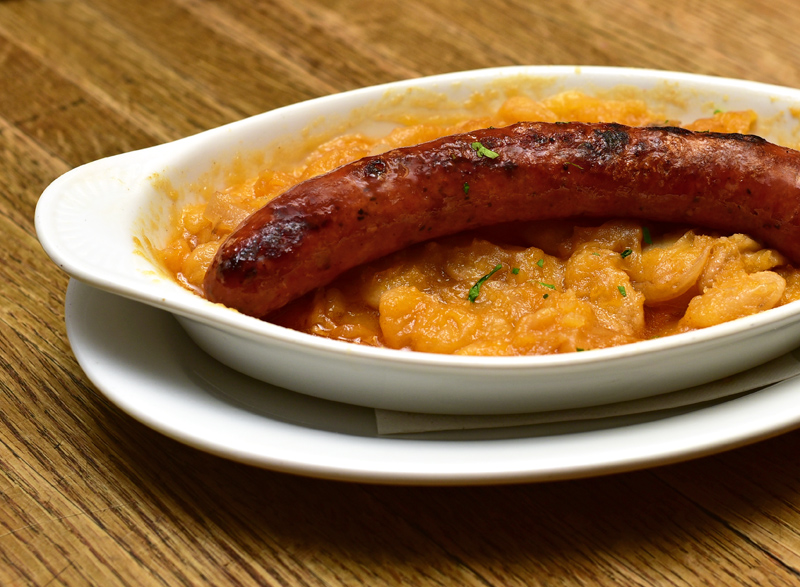 The jagnjeca potkolenica, braised lamb shank, is prepared very simply and with no sauce, which is unusual for a braise. Still, it’s very tender, and there is some kind of seasoning (I’m not sure what it is, but it works well). The meat rests on a bed of plain salad and mashed potatoes. The latter are more like a true potato purée, fluffy, very soft, and creamy without being too rich. My guess is that they mix the potatoes with more milk than butter, maybe some stock too. Anyway, I like them. 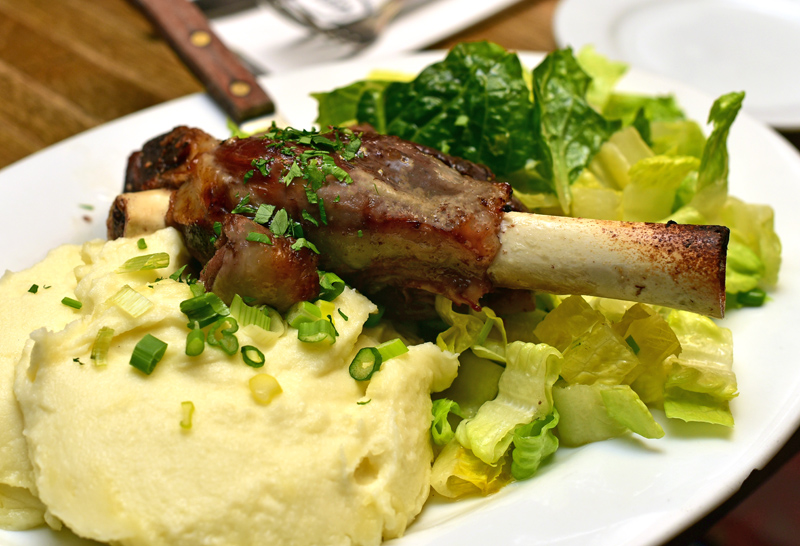 Finally, there are desserts: a selection of about half a dozen homemade Serbian options, plus a few dessert wines by the glass from Croatia and Slovenia.

The kesten pire sa šlagom, chestnut purée with whipped cream, is very rich in chestnuts, some coarsely ground and some still in chunks. I don’t tend to like my desserts very sweet, yet I think this one should be a bit sweeter. The whole dessert has a dry mouthfeel, which is somewhat to be expected with chestnuts but could be mitigated by changing the recipe. The yummy whipped cream on top (probably homemade) partly serves that purpose, but it’s not enough. This is a strange dish. Even though I love chestnut purée, I usually refrain from eating a whole jar of it at once. The pita sa višnjama, cherry pie, would be more aptly described as a strudel. The filling is almost 100% sour cherries (maybe with a little bit of sugar), so it’s fairly acidic. The pastry is a kind of phyllo dough, but thicker and weirder, hard to cut without making a huge mess. There’s no fat between the layers of dough, which makes it a bit dry. The sweeter cherry sauce creates a nice contrast with the sour cherries. All things considered, it’s pretty good overall. 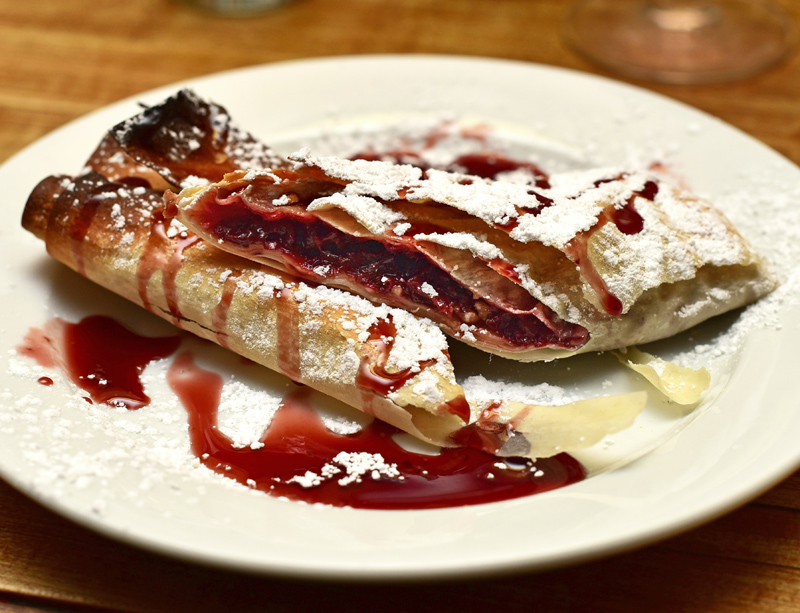 Former Yugoslavia is one of the places in the Eastern Bloc that produces interesting wine, and Kafana boasts an impressive two-page-long list of the stuff, with only a few entries from neighboring countries. In particular, there’s a very large selection of orange wines, probably one of the largest in NYC. Unfortunately, only two of them are available by the glass (both Slovenian Pinot Grigio, from Pullus and Mansus, respectively), and they’re just Ookay. Come on, Vladimir, get a Coravin and pour us some of that Vodopivec Vitovska Anfora! On the other hand, I tried one of the reds by the glass from Serbia (Vino Budimir‘s Triada 2008, made with Prokupac grapes), and it was very good.

You should also try Cockta, Slovenia’s answer to Coca-Cola. While it seems that its creators wanted, back in the 1950s, to avoid copying similar foreign drinks, its taste is reminiscent of Coke. With some important differences: it contains a blend of local herbs, and as one of its slogans claims, “No Caffeine – No Acid – No Kidding!” The result is like Coke with an herbal twist, and quite nice. 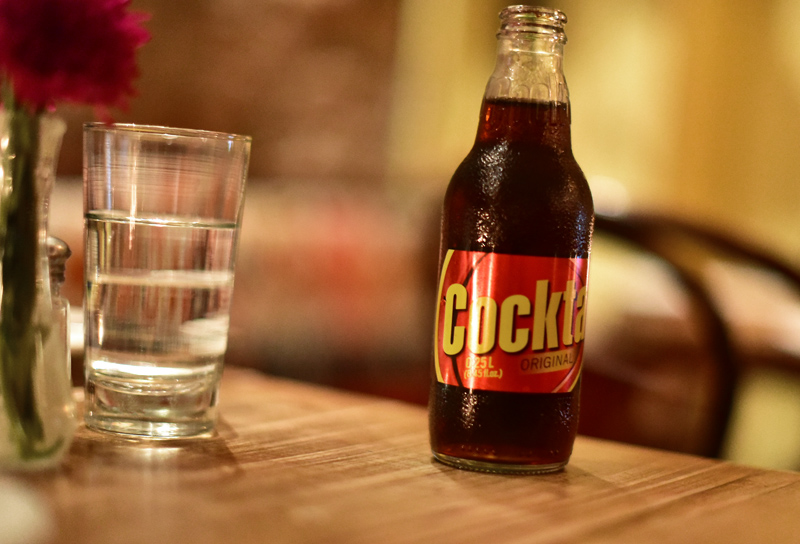 Kafana is cash only, but the prices are very reasonable and the portion sizes are generous. Service is good — actually, it’s been a while since I last had to report a service disaster on this blog. Now, if you expect the ambiance to be straight out of a Kusturica movie, with patrons drinking profusely while singing and dancing to the sound of live Gypsy music… sorry, it’s not quite like this. Although they have live music on some nights, they don’t serve hard liquor, and there’s really no place to dance. Not even on the tables — they’re too small.

Regardless, Kafana is well worth a visit. The food is even better than I remembered, and I want to go back to try more of those orange wines! 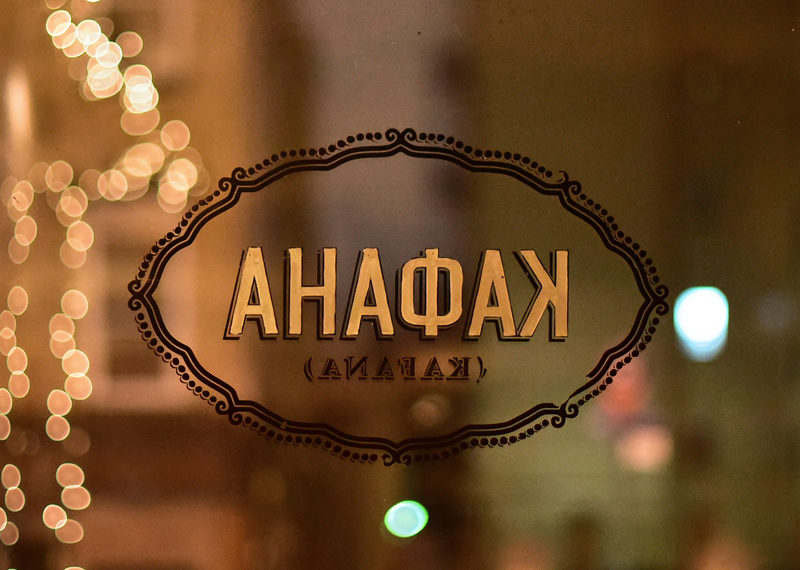