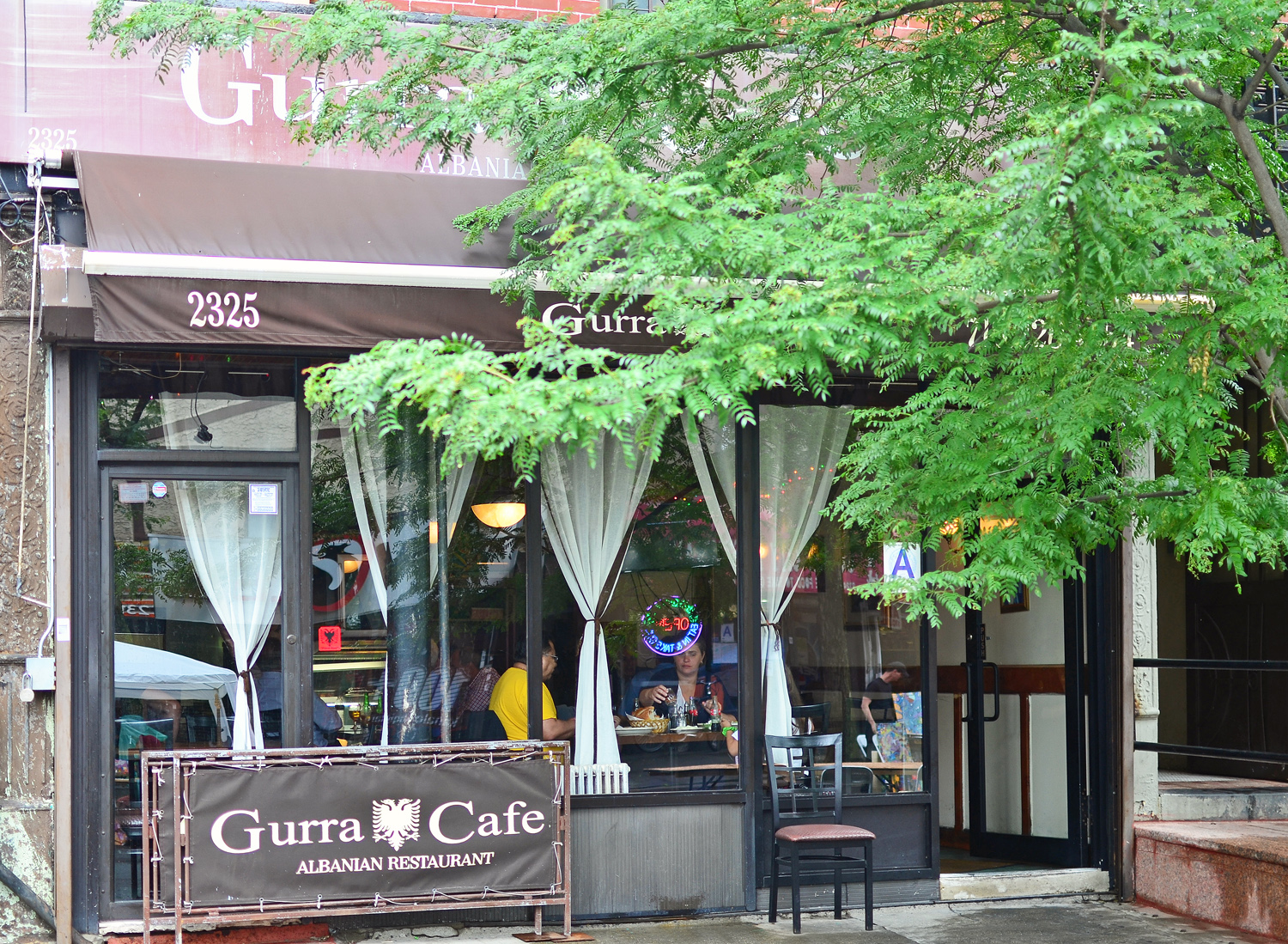 These days, the Belmont neighborhood in the Bronx might be more evocative of Albania than Italy, even on Arthur Avenue. You can still find pizza, but many parlors are run by Albanians. And anyway, pizza is Albania’s unofficial national dish, the one that’s served more than any other throughout the country. Then there are those restaurants focusing specifically on Albanian cuisine, such as Gurra Café. Or rather Kosovan cuisine, just like Dukagjini Burek — is there any Albanian restaurant in NYC that’s actually Albanian?

Why Kosovars, in New York at least, insist on calling their cuisine Albanian rather than Kosovan is a bit of a mystery. It’s not like the average American knows anything about either country. And even if the two are close enough, it seems to me that there are some noticeable differences. Kosovan food relies heavily on grilled meat, as is the case with much of former Yugoslavia. Classic Albanian dishes, like fërgesë or tavë kosi, are missing from the menus of these joints. Don’t expect any seafood dishes from the Adriatic, either. And where’s the whole spit-roasted lamb?

What you get instead at Gurra Café is an unadorned list of meat dishes whose names rarely exceed one word: “steak”, “veal”, “chicken”, “qebapa”, “pleskavicë”, “gullash”, “suxhuk”. Man hungry, man want meat. (During a recent Sunday lunch visit, the place was entirely filled with Kosovar men only). If there’s a second word in the title, it’s usually “Marsala” (the Italian influence). Are you vegetarian? Try “fish” or “salad”. 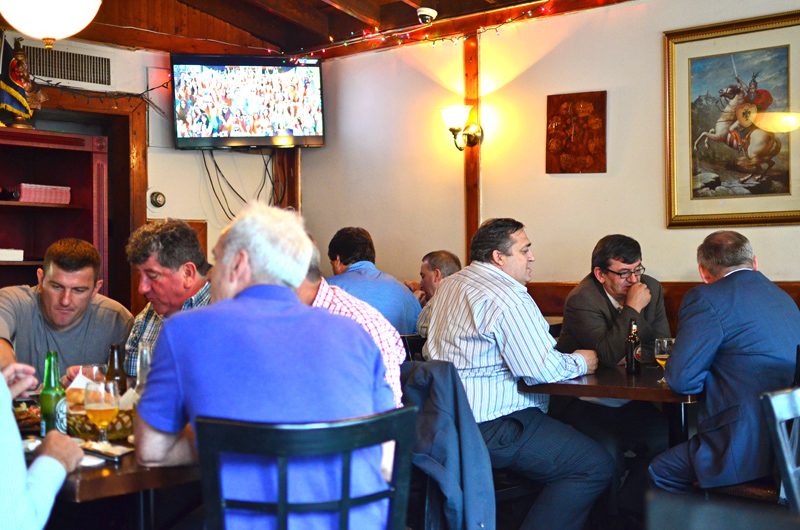 There’s not much to say about the dining room. Picture of Mother Teresa, check. Picture of Skanderbeg, check. I wouldn’t be surprised if a picture of Jim Belushi joined the collection someday. Add to this scene standard-issue restaurant tables, a faded poster of a waterfall that may or may not be connected to the restaurant’s name, a small Albanian flag in a corner, a refrigerated window showing the aforementioned meat portions waiting to be cooked, and a TV showing the inevitable music videos of scantily clad Balkan women and BMW- and Mercedes-clad Balkan men, which always make me wonder how the Western world can still consider those to be luxury cars.

Time to eat. For bread, depending on what’s in stock, you will either be served a fresh but forgettable loaf of white bread, or a kind of lepinja (a flatbread common in the Balkans), which is a bit more interesting. 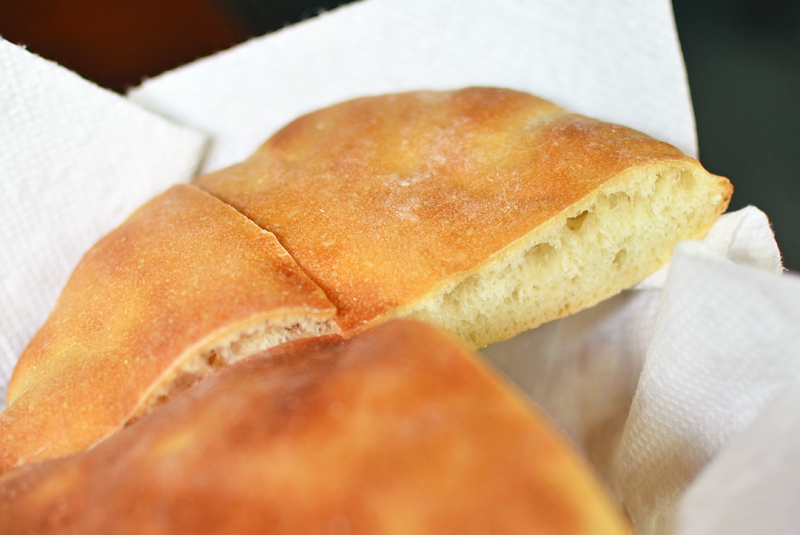 Everybody gets a salad with tomatoes, lettuce, brynza, and a little bit of sliced red onion. It’s OK for what it is, though I would never order it on its own. But be warned: this salad contains pretty much the only vegetables, and certainly the only greens, that you’ll see during your whole meal. From here on out, it’s going to be only meat. 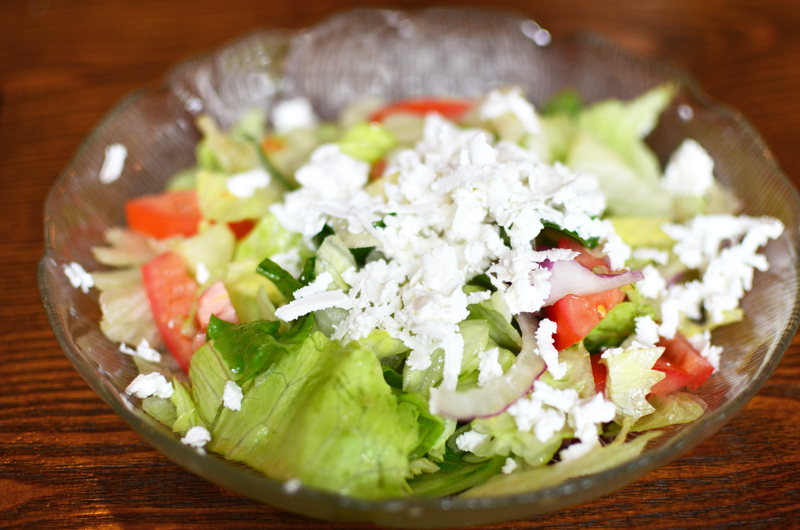 Starting with the groshë (bean soup), which is like half-soup, half-cassoulet. The thick liquid contains a lot of white beans, and that’s what it mostly tastes like, though I wouldn’t be surprised if there was carrot, onion, and maybe tomato in the mix too. A piece of beef, called “jerky” on menu, rests in the middle. The meat — slow-cooked, salty, a bit stringy but pretty tender — goes well when eaten with beans at the same time. Rustic but good. 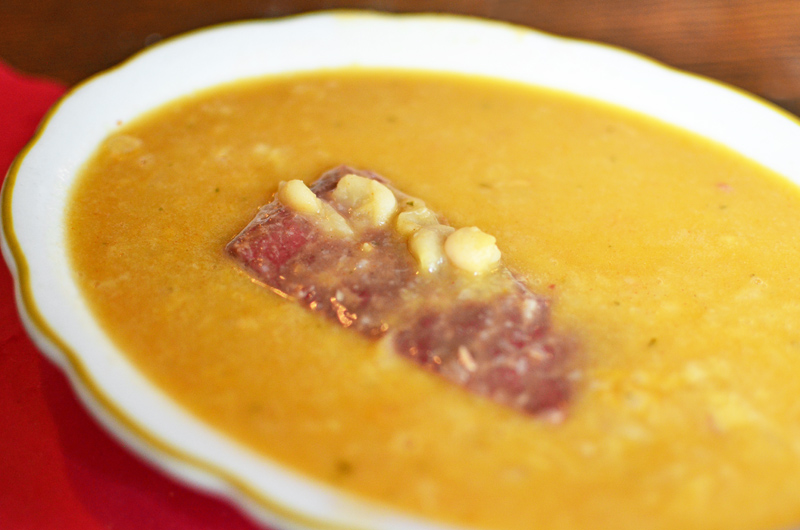 The qofte is a bit different from the recipe I posted recently: it can only be called “meatball” if we assume someone stepped on it. The small, flat patties are made with finely ground lamb seasoned with salt and, as seems to be customary in former Yugoslavia, not much else. Maybe a little bit of pepper. And just like in my review of Balkan Dining, the meat has a slightly spongy texture, most likely because of the method by which it’s ground. While it is very simple stuff, the lamb tastes great. Like every other meat dish that follows below, it’s served with a “white sauce” — a salty mixture of feta, milk, and yogurt (I think) — that comes either on the side or poured straight on top of the food, to make things a bit more interesting. 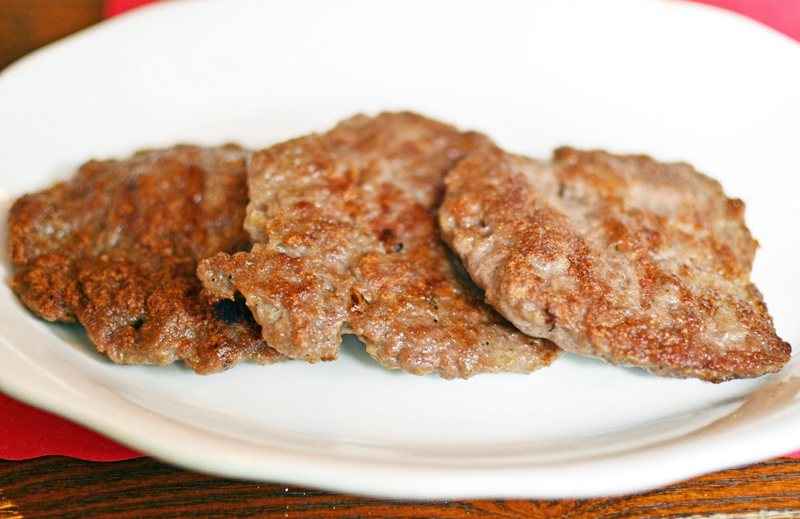 The suxhuk is a spicy sausage, the Albanian version of Turkish sujuk. I believe it’s a mixture of ground beef and red pepper flakes that’s been cured. The result is pretty spicy, with a slightly dry mouthfeel but greasy at the same time. In other countries this is the kind of sausage that one finds cut into thin slices, whereas here it is halved lengthwise. This requires a lot more chewing, but I do like the taste. 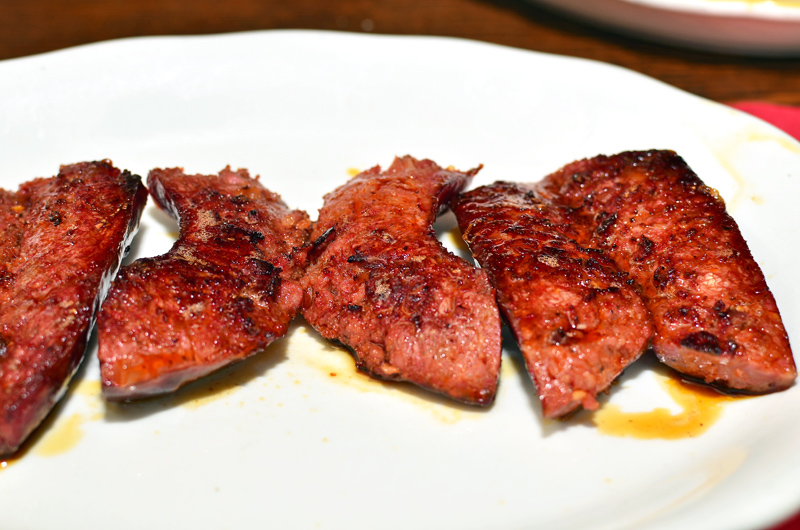 Then there’s the combination platter, or Kobinim alla Gurra as they say in the Motherland. It contains the same qofte and suxhuk, plus qebapa, which is really the Kosovan version of the Bosnian ćevapi: grilled skinless sausages. The meat mixture is exactly the same as in the qofte, so I don’t have much to add, other than Behold! the “white sauce”. 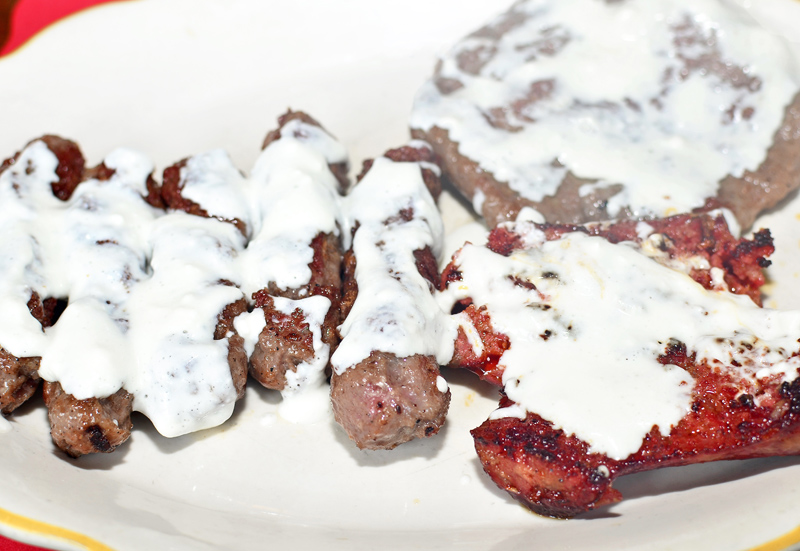 Next, the pleskavicë, which is pretty much an oversized qofte. In fact, it’s exactly an oversized qofte: same meat, but the flat patty is large enough to cover the entire plate. Once you know this, the dish becomes rather pointless, even though it still tastes good. It would be nice to have more variety on the menu instead of three identical meats with only slightly different shapes. I see that regional variations do exist, so we do not need to be stuck with a lamb-salt-pepper trio. 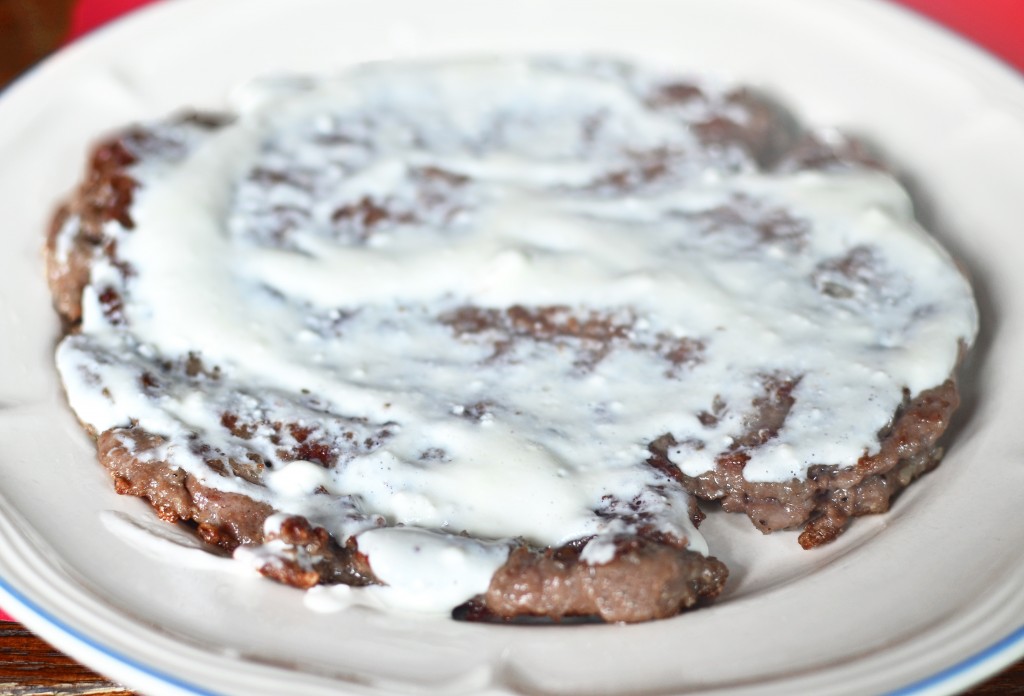 For dessert, they supposedly make baklava, except they never had any when I went there (even though it was always on weekends). Drink options are very limited, too: “wine (bottle)”, “wine (glass)”, “beer”, “soda”, “juice”. Those Kosovars are a people of few words. The red wine is some American plonk that you should avoid. There’s also Albanian coffee.

Service is fine, though with only one waitperson and one cook, you’ll be served faster if the restaurant isn’t full. Meals are ridiculously cheap — count $11 for the combination platter, which can almost feed two. Overall, the food at Gurra Café is good, well prepared and authentic, but it’s super simple and not varied. Not to repeat myself, but on the already short menu (which in itself isn’t a problem), three of the dishes are one and the same, one is a combo, and four more entries are just variations of other dishes with Marsala added. I find it hard to believe that the Ottoman Empire didn’t bring spices along when they occupied the Kosovan region for four and a half centuries. And what’s with never having the desserts available? I want my baklava! 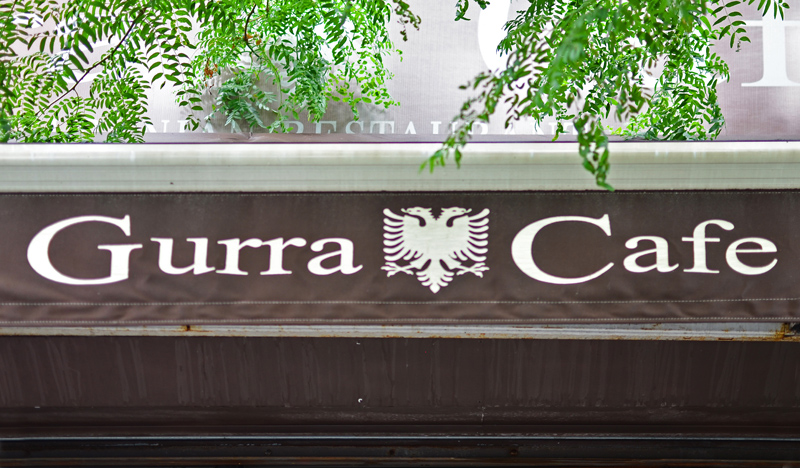 On a side note, while in the neighborhood, use the opportunity to do your Albanian grocery shopping! There are a few specialty delis on Arthur Ave, in addition to the one or two pizza parlors that also make bureks. But the largest store I’ve found is Mërgimtari, at the corner of Hoffman and 187th. This butcher and grocer sells all kinds of sausages, half a dozen sorts of phyllo dough, and plenty of other Balkan goodies. 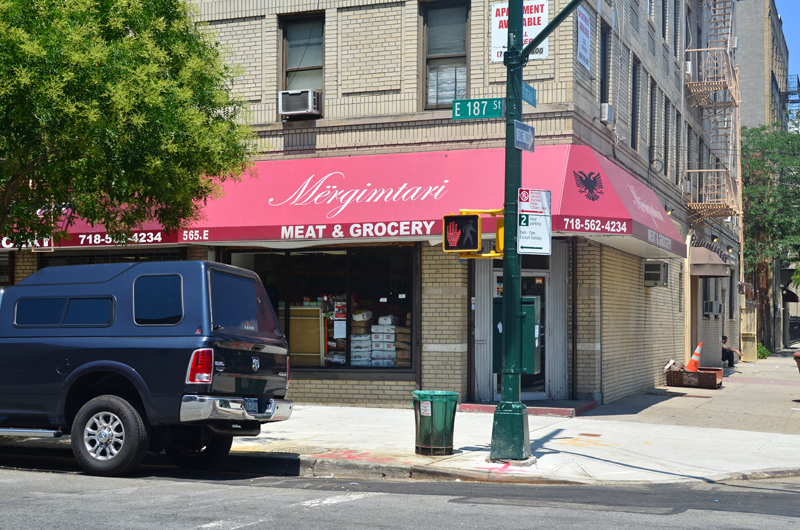 I was reading your profile at Bon Appetech and it leads to your blog – god I think you are totally qualified as a food blogger and critic. Going to the conference this Saturday so hopefully will see you there!

PS: l tried IBM Watson and think it is an amazing tool!