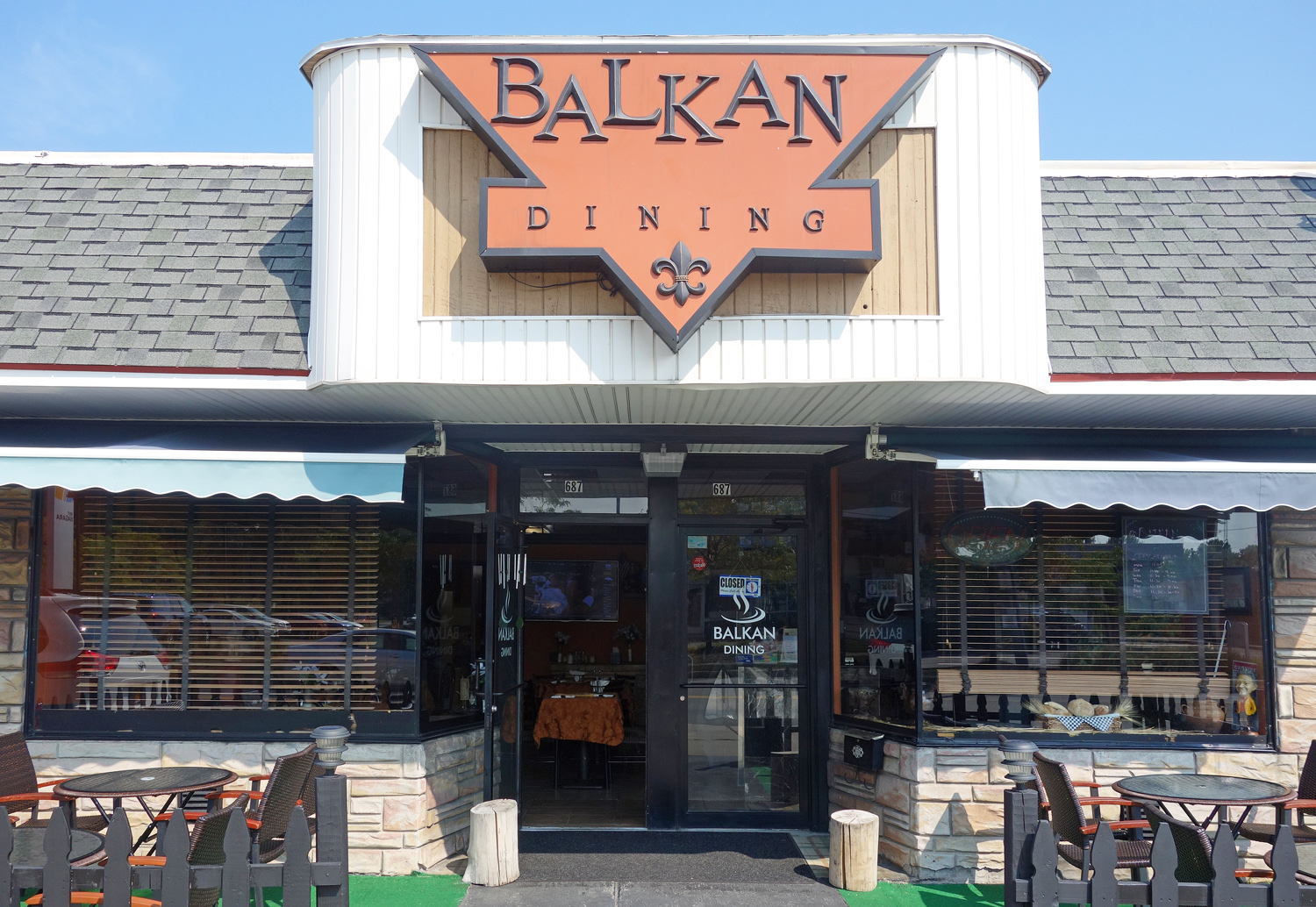 This post departs from my typical Red Alerts in the sense that Balkan Dining, in Buffalo, NY, is a legit Eastern European restaurant, not a random eatery that serves a somewhat Eastern European dish. However, I don’t foresee being able to visit the restaurant another time in order to accumulate enough material for a full review. Anyway, Balkan Dining is a small Bosnian restaurant in what looks like an out-of-the-way dormitory suburb of depressed Buffalo, only feet away from a Family Dollar and a 7-Eleven, and, well, not much else.

The menu’s not too long. Salads occupy a prominent place and range from the non-Bosnian classic (Greek, Caesar, mozzarella) to the Balkan (various combinations of tomatoes, cucumbers, bell peppers, yogurt, sour cream, feta cheese). Next, expect lots of grilled meats: pljeskavica, ćevapi, ražnjići, sujuk, chicken kebab… Plus goulash and Bosnian musaka. If you go to Balkan Dining but decide you don’t want to eat Bosnian food, well, firstly there must be something wrong with you, as neither the neighborhood nor the dining room present much appeal, but you still have a few choices in spaghetti, fish fillets, and soups. There are also a few desserts displayed by the counter, including baklava. 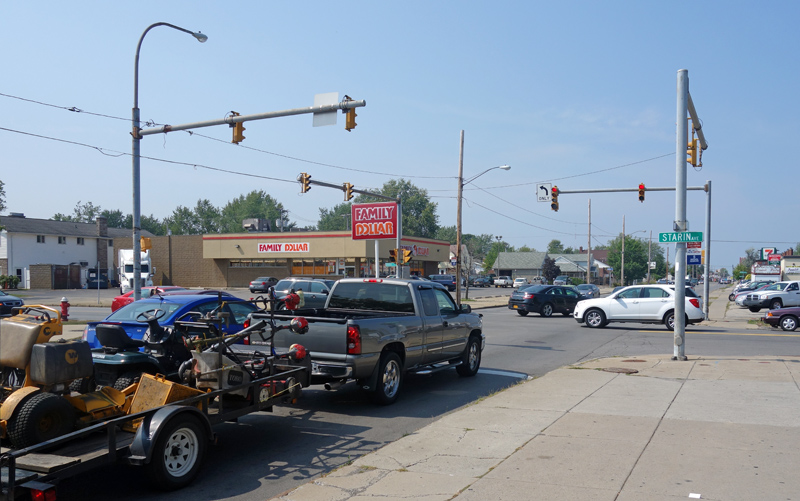 I had only one dish, the ćevapi, a generous heap of of skinless meat sausages served inside a lepina (Bosnian flatbread), slit lengthwise. This isn’t truly a sandwich, though — it’s way too big to be eaten with one’s hands without making a giant mess. The lepina is homemade and fresh; it’s very airy, a bit like a focaccia but without the oil. This is essentially the same kind of bread I used in my Grilled Pike, Liberland Ajvar, and Flatbread (except I suggested pita bread as a substitute). The meat, ground beef seasoned with salt and black pepper but apparently no other spice, is juicy and grilled to perfection. It has the somewhat spongy texture that I associate with very finely ground meat and that I like only moderately. The dish is served with kajmak (Bosnian sour cream) which goes nicely on the meat, and some unnecessary sliced raw onion and lettuce. Traditionally, ćevapi sometimes comes with ajvar; Balkan Dining offers it with other items, so just ask. 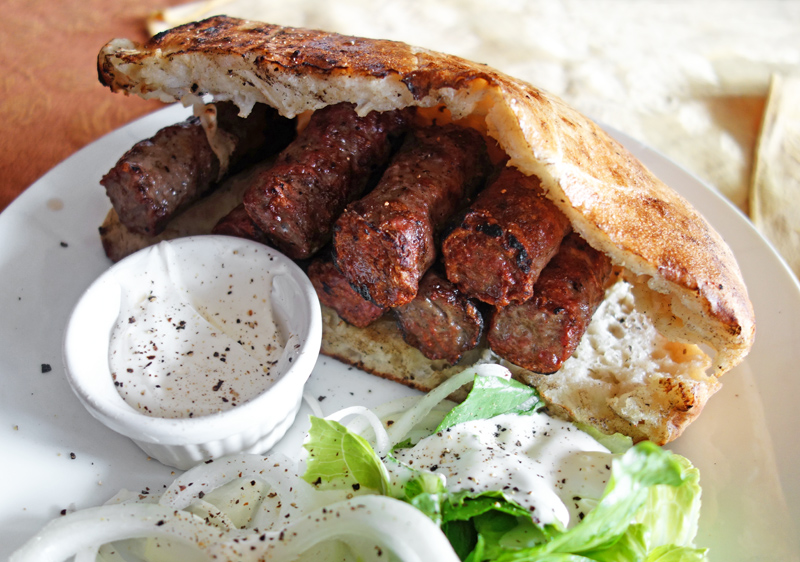 A good lunch overall. It reminded me a lot of the food I had in some Kosovan restaurants in the Bronx (more on this in future posts). Service seemed very fast, but that’s not hard to do when there’s only one customer in the room. So if you’re in the Buffalo area, pay a visit to Balkan Dining! Sure, you could go to some pretentious restaurant that tries to cook the cuisine of popular Western European countries where the chef has never set foot, but that’s a recipe for disappointment. 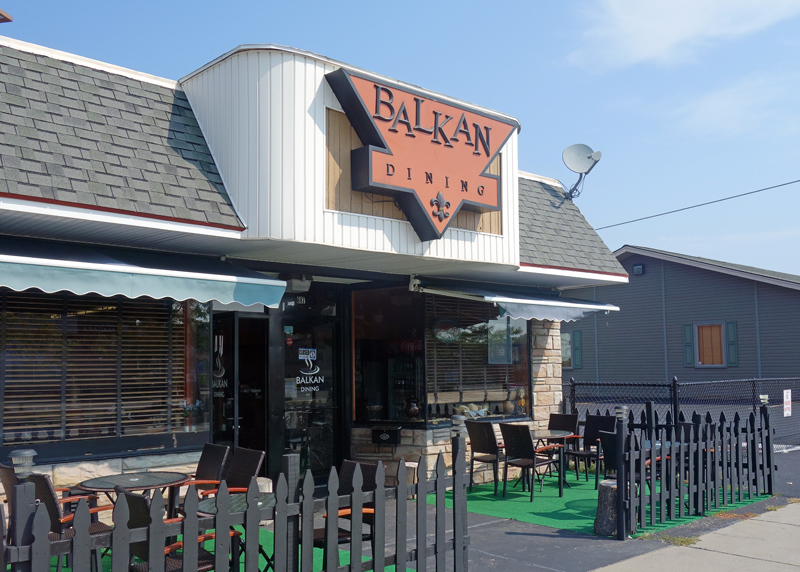 Next time on a trip back home to Western NY I will have to look for this place. It sounds interesting.