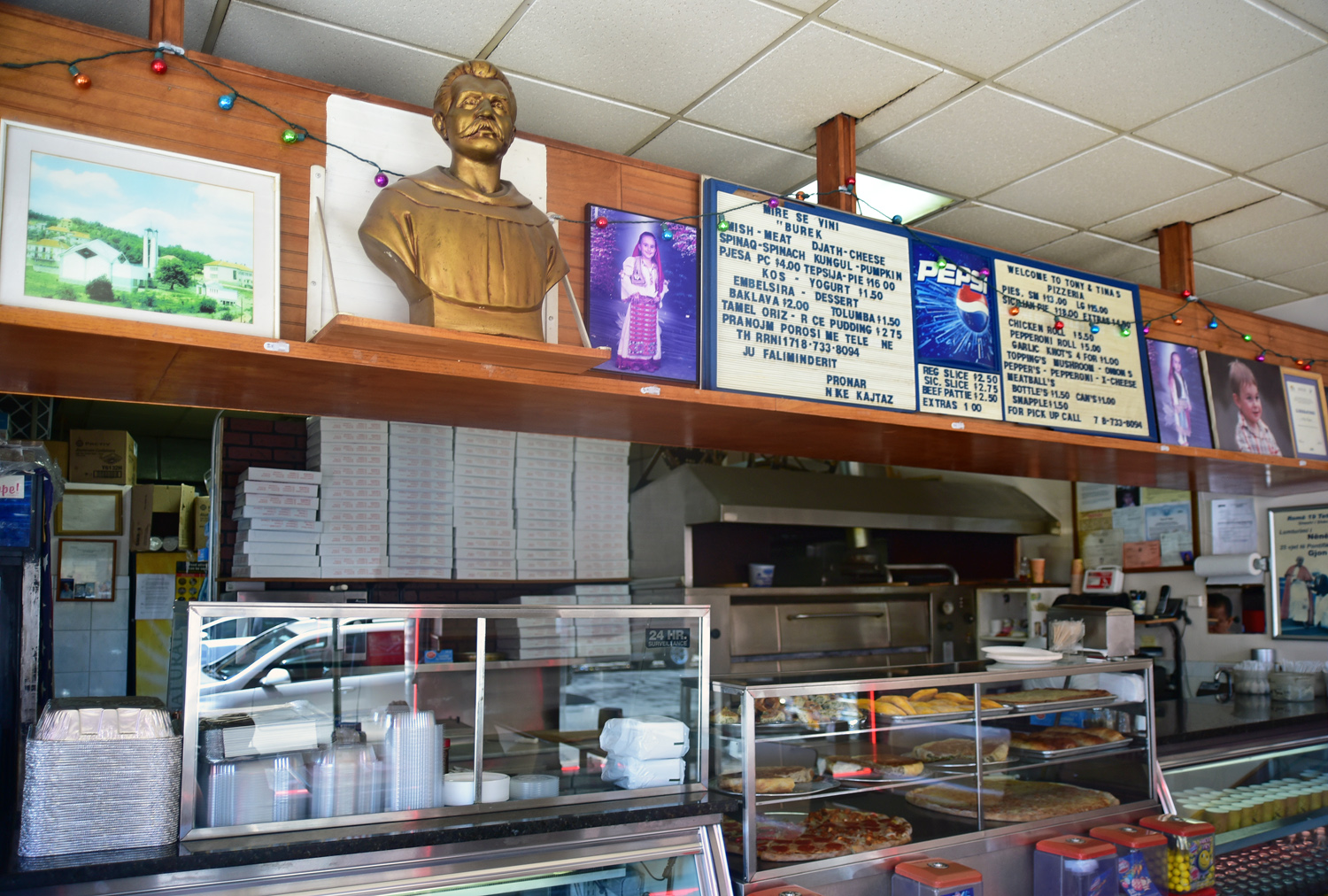 “That’s it,” you must think. “He’s lost it. He’s reviewing some grubby pizza joint in the Bronx, and he’s gonna come up with another one of his tortuous stories that’s supposed to prove without a shadow of a doubt that, lo and behold, pizza actually originated in Eastern Europe. He’s gonna explain that Eastern Europe starts in Alsace, and Milan is further east than Alsace. Then he’ll throw in some tales about Mongols of Central Asia putting slices of raw meat under their saddles in lieu of preparing dinner, he’ll rehash all the improbable things that, in his drunken stupor, he claims to have seen in Russia and beyond, and he’ll declare khachapuri the new proto-pizza.”

But noooo, not at all! Have you already forgotten everything I said in last summer’s post about Dukagjini Burek? Well, let me quote myself:

You’ll find Albanian and Kosovan restaurants on either side of Bronx Park. Some of the pizza joints on historically-Italian Arthur Avenue and elsewhere are actually run by Albanians, and serve Albanian bureks in addition to pizza.

Tony and Tina’s Pizzeria, right on Arthur Avenue (in Belmont, across Bronx Park from Dukagjini) is one such example, its owner being another Kosovo Albanian. 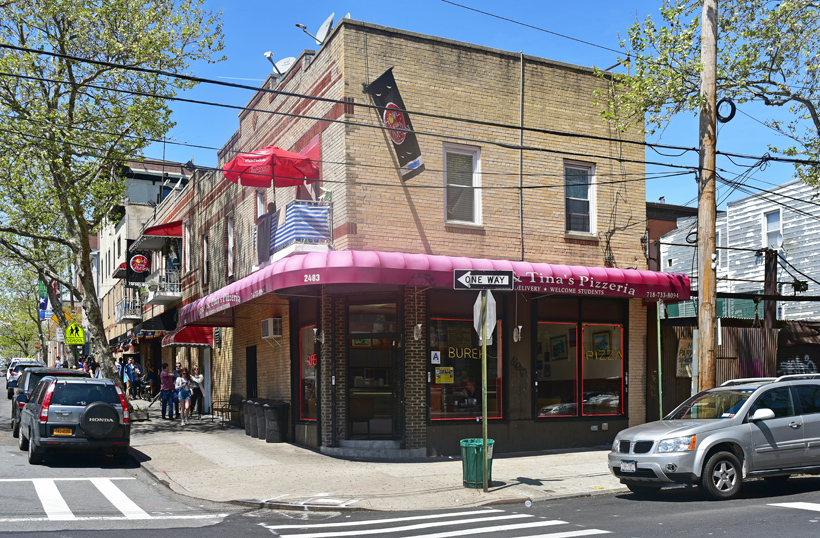 I won’t dwell on the decor; it’s a typical pizza joint with typical Albanian/Kosovan paraphernalia. Picture of Mother Teresa? Check. Picture of Bill Clinton with… the owner??? Check. Albanian emblem? Check. Though I’m still waiting to see a Kosovo flag in a Kosovan restaurant…

When the gentry venture into the Bronx to try the food at Tony and Tina’s, they usually make a point of denigrating the pizza while ooohing and aaahing about the bureks. Do they even try the pizza? I’m not sure. But I’ll be honest: I didn’t. Maybe it’s amazing (some Yelpers say so). Most likely, it’s a so-so to decent New York pizza, like hundreds of others across the city (many Yelpers concur). It’s just that nobody treks that far for a regular slice. Except perhaps for neighboring Fordham University students — those oft inebriated, ever cyclothymic food critics. 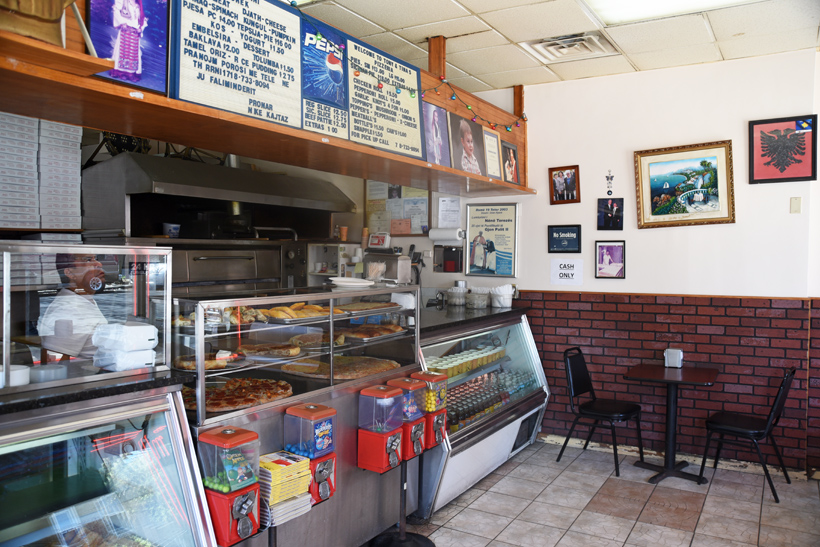 So we’ll be having bureks, then. They come in four varieties. In all of the them, the phyllo dough is perfect for the job: a dozen layers total, crispy on the outside, and softer, almost like pasta, inside, with what looks like one layer of filling in the middle. Some people on Yelp mention microwaved bureks, but all I can say is that there was no such thing on display when I was there. All it takes to reheat bureks is a couple minutes in the pizza ovens.

The meat burek is a bit disappointing. The dough’s good, and the filling is fairly generous (compared to Dukagjini), but the meat is so-so. I assume it’s beef. It’s very finely ground, stewed with onions, maybe a hint of tomato, plus salt and pepper. Not quite bland, but very generic. I’d almost say it tastes like canned meat. 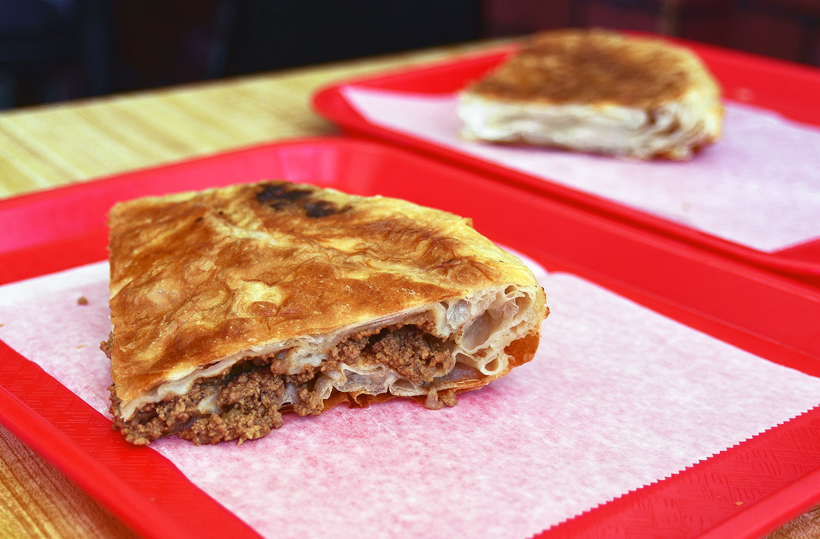 The cheese burek scores much better. It definitely hits the spot if you’re in the mood for a burek. The cheese is very good, not too salty. As usual, it tastes like a mix of feta and ricotta, this time with a lot of ricotta. In fact, I wish the scale tipped just a little bit more towards the feta side, to make the mixture a bit saltier and not as soft. 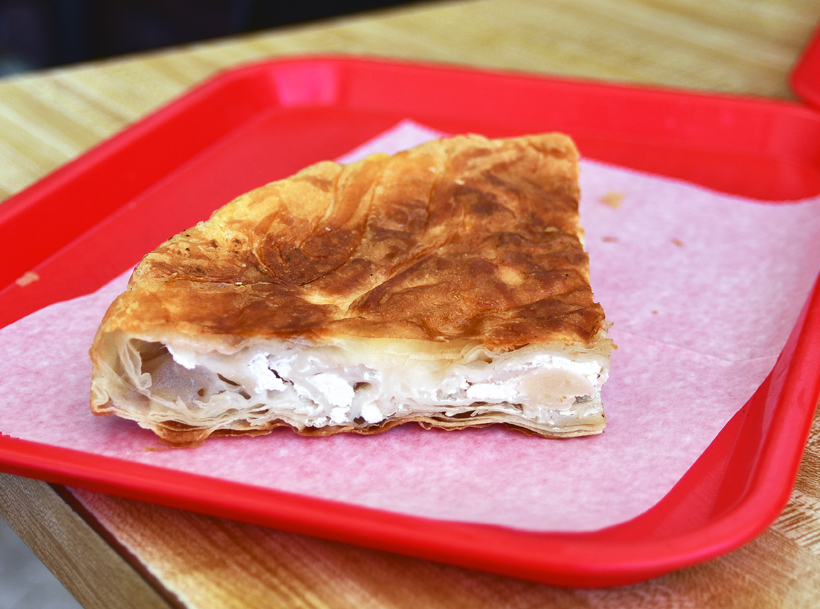 There are also spinach and pumpkin bureks, though I haven’t tried them. The spinach one because spinach is not my thing, and the pumpkin one because they didn’t have any. And that’s too bad, because with its coiled shape and sweet filling, it seems to have a small following among the aforementioned gentry (such as in the Village Voice). Not in season? Methinks canned pumpkin grows on supermarket shelves year-round, but maybe I’m holding the chef’s standards in undeservedly poor esteem.

Get a cup of the excellent homemade yogurt to dip your burek in. This very tangy, fairly thick dairy stuff is a great accompaniment. 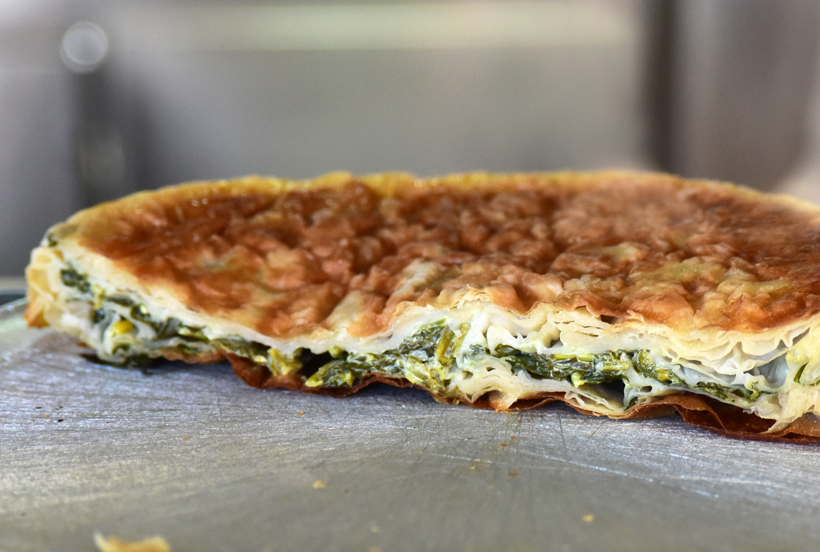 The baklava, served cold out of the fridge, is built a little like the bureks, except it’s shaped as a single-portion triangle. Several layers of phyllo dough wrap a thick layer of ground walnuts in the center, and the whole pastry is soaked in a deluge of sugar syrup. I’d prefer it soaked in less syrup so at least some of the dough remains crispy, and flavoring the syrup with something more than sugar would be nice. As it is, it makes for an OK but very simple baklava. 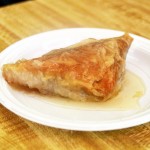 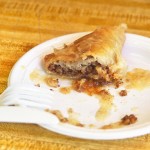 On the beverage front, your only options are water, juice, and soda (though in my opinion, no person of taste would call Pepsi a viable option). Go there in May, and maybe you can convince one of the many neighboring frat boys to share with you one those red cups they’re always carrying around.

Is this the most detailed article ever dedicated to Tony and Tina’s Pizzeria? Quite possibly. Rating a restaurant on a scale of 10 after trying three simple dishes isn’t an exact science, but I’ll try my best. The cheese burek is the most memorable of the bunch, while the other two have their problems. I’d say that the place is a notch below Dukagjini. Which begs the question: unless you live right there near Arthur Avenue, why not just go to Dukagjini? 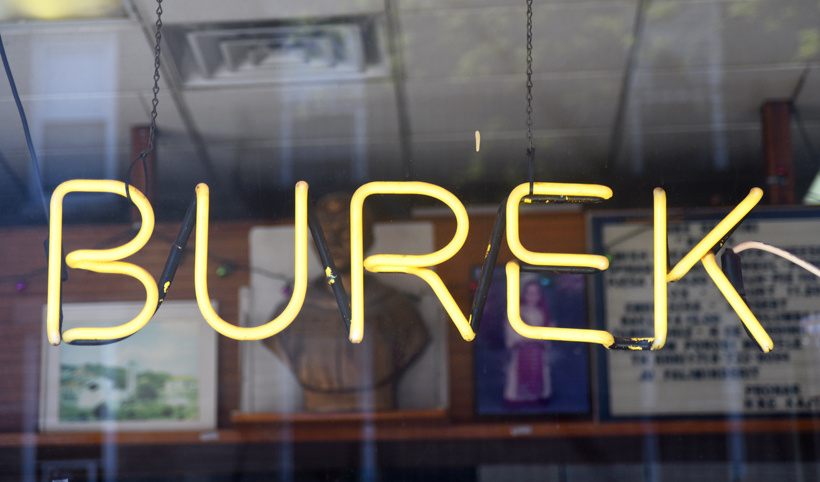