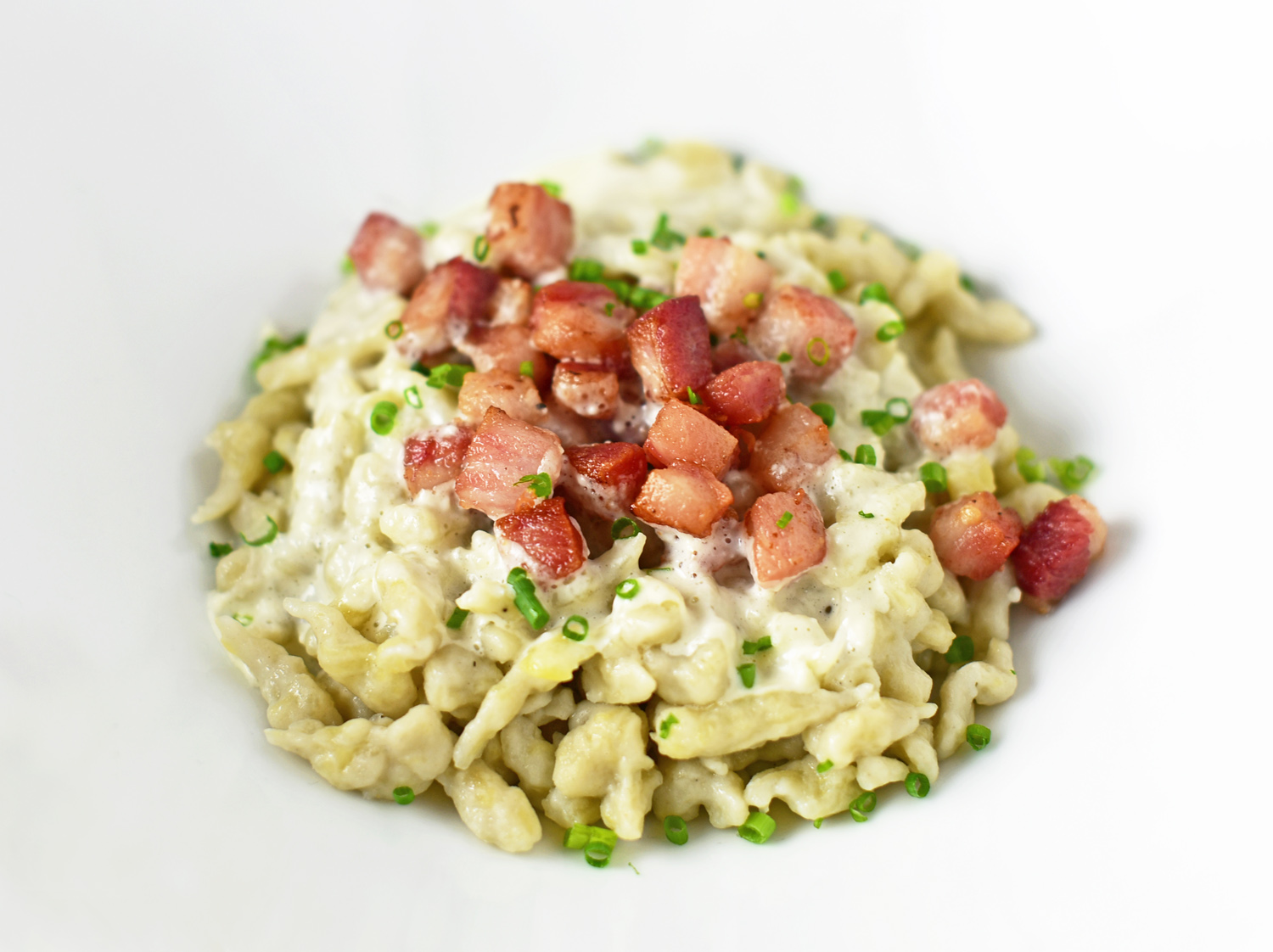 Bryndzové halušky can be called Slovakia’s national dish without too much debate. This dish of potato spaetzle/gnocchi topped with a sheep’s milk cheese sauce and fried bacon is available in every other Slovak restaurant, if not more. Halušky have their own songs (I’ll let you google them) and their very own festival, Halušky Fest in Turecká. The latter starts in a few days, and if you can’t make it to Slovakia in time, I recommend watching the video on the web site to get an idea of what you’re missing, including the Slovak and European Championship of Halušky Making and Eating, “an unforgettable cultural experience”. You may want to start planning (and training) for next year.

Looking at pictures of bryndzové halušky, though, one must observe that it often looks about as appetizing as dog food. Remember the Koliba debacle? Something must be done. So let’s start with how not to make halušky. For reference, see this video below. Cutting large pieces of a potato dough that looks like food glue is guaranteed to get results as inedible as Koliba’s. And can anybody explain to me what the boiled potato is for in this recipe?

You might think that this is how halušky are always made, that your grandmother made them that way just like her own grandmother before her, and that I’m just an urban food snob who has never experienced the joy of coming home to a hot plate of denser-than-concrete halušky after a hard day spent working in the high pastures of the Tatras or the factory in some forgotten communist industrial town or the IT sweatshop in the suburbs of Bratislava. And you would be wrong at least on the first count. I have irrefutable proof that real halušky can be made infinitely better than this. Just look at the following picture, taken at the Bratislavsky Mestiansky Pivovar, a pub in the capital’s center. No big blobs of undercooked potato dough, no suspicious plaster-like white sauce, cute little chopped chives sprinkled on top… Times have changed! And for the record, I have actually worked in a factory in a forgotten communist industrial town, but never enjoyed a plate of potato glue for dinner afterwards. 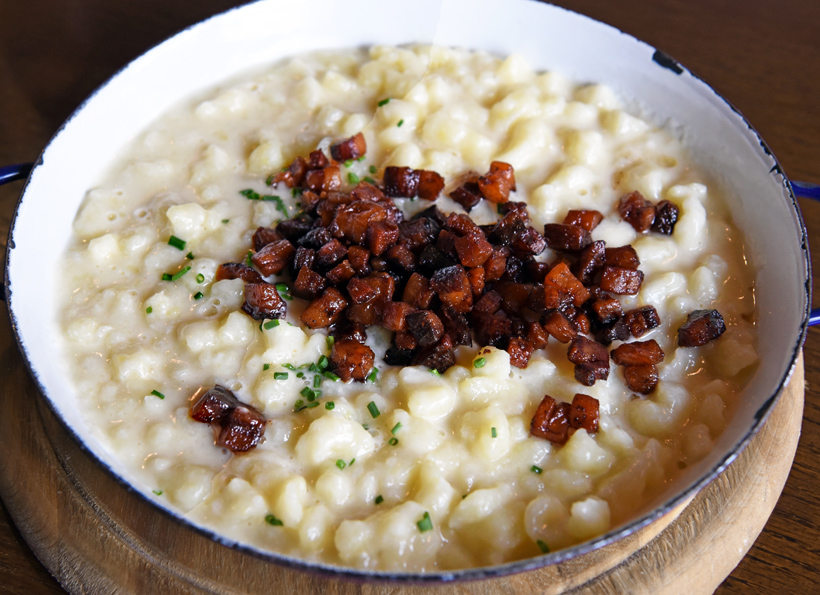 The focus of my version of bryndzové halušky is precisely to make it less dense, while preserving its bold flavors, with the understanding that it will never be a light dish: 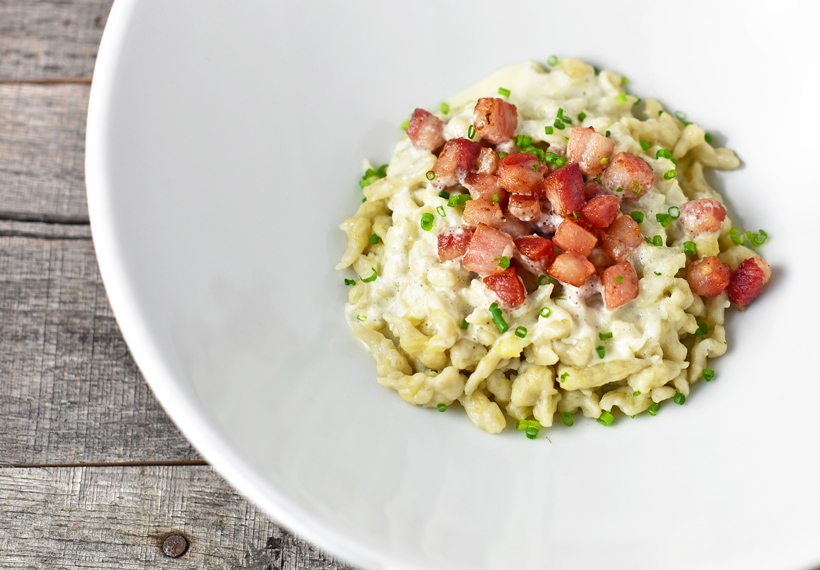 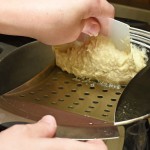 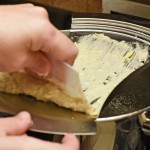 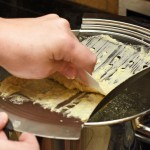 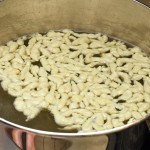 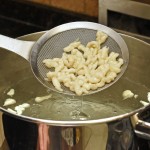 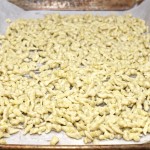 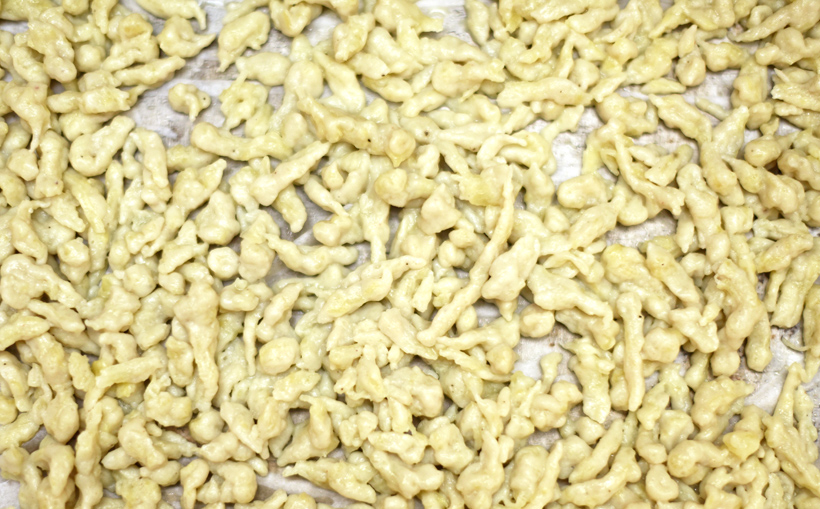 some of us work all day and just want the recipe how to make halusky from the powdered version. What the hell do I mix it with. Water, eggs?

Stefan, I feel your pain. Try this: 1. Poor yourself a drink. 2. Sit in the most comfortable chair in your house. 3. Read the instructions on the package.