Home RecipesDesserts Rigó Jancsi: the Princess, the Fiddler, and the Cake
DessertsHungarian Food

Rigó Jancsi: the Princess, the Fiddler, and the Cake 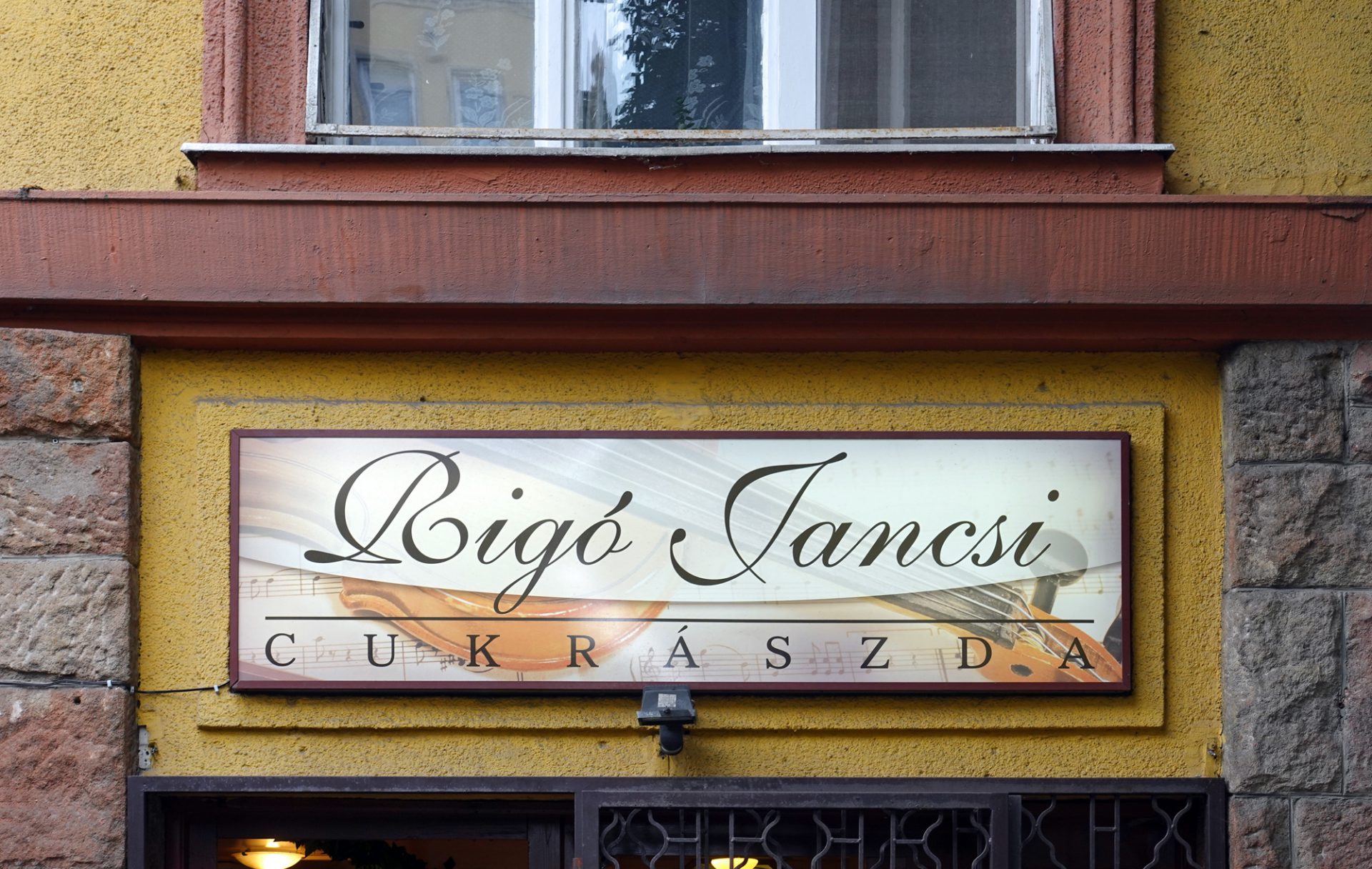 Hungary has a rich history of cakes and pastries, which are sold in prestigious cafés and confectioneries throughout Budapest and beyond. Many historic establishments have survived to this day, and serve such timeless creations as the Dobos torta, the Esterházy torta, and the Sachertorte. These cakes tend to share similar, mostly uneventful genesis stories: chef creates cake named after some dude he admires (often himself), people like it, cake becomes and remains famous. But there is one cake with a more colorful history: the Rigó Jancsi.

It all begins in Paris in 1896, as Clara Ward, Princesse de Caraman-Chimay, dines at a restaurant with her husband, Prince Joseph. Born in Detroit to a tycoon often considered Michigan’s first millionaire, Clara met the Belgian Prince when he visited the United States, in 1889 (other accounts claim they met in Europe). Despite her young age (only 16), he promptly proposed marriage and brought her back to his native country. By 1896, the couple has two children, has moved to Paris, and enjoys visiting the most famous Parisian restaurants, where even Escoffier supposedly named dishes after the them.

One can reasonably imagine that Clara, now 23, is getting weary of a boring aristocratic husband almost twice her age who, by some accounts, is neither rich nor handsome. Enter restaurant violinist Rigó Jancsi (Jancsi, or “Johnny,” is his first name; Hugarians put surnames first): he’s popular and good-looking, he plays “Gypsy” music, and he sports a magnificent mustache. The Princess can’t resist! Soon, the two run away across Europe and get married, probably in Hungary. The elopement is abundantly relayed in the newspapers of the time. A German postcard shows the pair posing for a photograph. Henri de Toulouse-Lautrec makes a lithograph of them, entitled Idylle Princière. At some point, the story goes, Johnny asks a pastry shop to make a special cake for Clara. “Rigó Jancsi,” the dessert, is born. (Though, considering how vague this story is, $10 says some random pastry chef just decided to cash in on the scandalous news of the day to promote his latest creation.)

Sadly, the couple’s happiness is short-lived. Only a few years later, Clara becomes infatuated with an Italian waiter she meets on a train. (I’m sensing a pattern here). This third marriage of Clara’s will not last either, and a fourth will follow, lasting until her untimely death in 1916. Meanwhile, our man Jancsi falls back into the same near-complete obscurity as before he met his infamous ex-wife – it seems that he continued playing the violin in restaurants, enjoying his dose of celebrity by association. Romantic (the unhappily married princess falls in love at first sight with a beautiful “Gypsy” man in Paris) or pathetic (the bored thrill-seeking rich girl runs away with a third-rate, womanizing fiddler whom she met at a restaurant)? You decide.

In any case, considering that Jancsi is little more than Husband Number Two of Four in Clara Ward’s story, and that the original cake was meant for Clara anyway, perhaps the dessert should be called Princess Clara instead. After all, she was the famous one. She often posed on Parisian stages like the Folies Bergère and the Moulin Rouge wearing skin-tight costumes, and was photographed and featured on many postcards during the Edwardian era. Even Marcel Proust based a character on her in A la recherche du temps perdu. Unless you are reallllllly into basketball, dedicating the dessert to some random fiddler seems a bit like naming a cupcake after Kris Humphries instead of Kim Kardashian.

But it’s time to talk about the actual cake, whose story has a few more plot twists! At a minimum, the Rigó Jancsi consists of rich chocolate whipped cream between two layers of chocolate cake, topped with chocolate glaze – seeing how blatantly unoriginal this is, we can better understand the need for a catchy name. Then, depending on who you believe, there should be a very thin layer of apricot jam, or a touch of dark rum and/or vanilla in the filling.

In Gundel’s Hungarian Cookbook, famous restaurateur Károly Gundel (who was a contemporary of Rigó) makes a light sponge cake aerated with egg whites and flavored with cocoa powder, then stacks a cake layer, apricot jam, whipped cream mixed with chocolate, another cake layer, and chocolate fondant. The version in George Lang’s Cuisine of Hungary, apparently based on information from the Hungarian Bakers and Confectioners Guild, is pretty similar. The main differences are in the cake, made without butter, and in the chocolate whipped cream, into which he adds gelatin to help the assembled dessert hold its shape.

However, take Gundel New Hungarian Cookbook, a cookbook written in the late 1990s by Kálmán Kalla, then executive chef at the “new” Gundel restaurant (reopened after communism), and you get a totally different recipe. The cake is a classic sponge with cocoa powder, the filling is whipped cream with milk chocolate, and there’s a milk chocolate glaze. The apricot jam is gone, and George Lang (also a partner in the restaurant) suggests this has been a common omission in the second half of the twentieth century.

In Kaffeehaus: Exquisite Desserts from the Classic Cafés of Vienna, Budapest and Prague, Rick Rodgers (who’s not exactly Hungarian and doesn’t seem to have done more than a well-connected research trip to Budapest for his book) talked to the head pastry chef at the prestigious Gerbeaud confectionery, who told him the following: “Whatever you do, remember that the real Rigó Jancsi always has cocoa, never chocolate” – a direct contradiction of all the above recipes. In the end, Rodgers’s dessert consists of a sponge cake with cocoa powder, whipped cream with cocoa powder, rum and gelatin, apricot glaze, and chocolate glaze (I read the recipe three times and still can’t figure out how the layers are stacked, but I assume the order is the same as usual).

Dusty Hungarian cookbooks are all well and good, but what does a Rigó Jancsi look like in its natural habitat, in the 21st century? There’s only one way to find out: head to Budapest and eat as many cakes as possible!

If at first I was concerned that I’d come back from my trip morbidly obese, it turns out that I didn’t need to worry: Rigó Jancsi cake has recently become quite rare. Most of Budapest’s pastry institutions – Gerbeaud, Parisi, Szamos – still offer plenty of classic pastries, but not the Rigó. I even tried countless less-famous pastry shops, with little success. Some of them have vaguely similar desserts, such as squares of thick chocolate mousse, sometimes flavored with rum, but without sponge cake. In the end, I found only three places:

Rigó Jancsi Pastry Shop
Well, duh. With a name like that, it’s bound to sell Rigó Jancsi. This small pastry shop in the middle of a residential neighborhood is pleasantly (or annoyingly, depending on who you ask) off the beaten path. The cake is served in very generous portions, with a tall layer of cream that looks impressive in its way. However, the sponge is pretty dry and the mousse, mostly whipped cream, only mildly tastes of chocolate – or cacao perhaps? No rum. It’s actually hard to eat because it’s nearly impossible to cut through the top with a fork. So, nice appearance, but average to below-average taste.

Hauer Pastry Shop and Café
Hauer was founded in 1890 and is still located at its original address on Rákóczi út, one of Budapest’s main drags. Rezső Hauer, who took over the store in 1899 and renamed it after himself, became the permanent honorary chairman of the Confectioners Guild in 1920, so the man knew a thing or two about Hungarian pastries, and, like Gundel, was a contemporary of Rigó Jancsi. With its top sponge layer propped at an angle by a small rosette of whipped cream, the shop’s small square of Rigó looks elegant. And it tastes good too. The mousse, flavored with a touch of rum, is quite airy though not like a classic French mousse where you have a lot more air bubbles – I would guess it’s made with whipped cream and chocolate.
The two layers of sponge are very thin, which might be a way to prevent the dessert from being too dry. My main complaint is that chocolate isn’t dark enough, and there is no flavor contrast between the layers (i.e., the sponge and the mousse kind of taste the same). Otherwise, good flavor, great texture, definitely better than the version at Rigó Jancsi Pastry Shop.

Lúd Pastry Shop and Café
Located in the newly renovated Klauzál Square Market Hall in District VII, Lúd is a newcomer, opened in September 2017. The café’s name means “goose” in Hungarian, apparently in reference to both the goose fairs that used to take place at the market and the lúdláb torta. Visually, the Rigó square is quite attractive here too, and it distinguishes itself by its two layers of whipped cream, one plain and one with chocolate. Sadly the execution is a bit disappointing. The chocolate layer only weakly tastes like chocolate, the sponge is a bit dry. No rum, and, as in the other shops, no trace of the apricot layer from the original.

Back on this side of the pond, I’ve been to at least two places that serve Rigó. I reviewed one of them a rather long time ago: Andre’s Bakery, one of the few Hungarian bakeries left in New York City. Back then, I wrote that their rendition, “chocolate cream filling sandwiched between two layers of chocolate sponge,” “was a bit heavy and too rich” and that “the chocolate glaze on top also had an unexpected mint flavor”.

The other place I’m thinking of is Dano’s Heuriger on Seneca, in New York’s Finger Lakes region. The late Dano Hutnik, a ballet dancer turned chef, was born in Ukraine near the Hungarian border. His restaurant, where I’ve eaten several times over the past decade or so, serves mostly Austrian food with a few Hungarian dishes, and the pastry chef is his wife, Karen Gilman. Karen’s Rigó consists of, from bottom to top: chocolate sponge, a thin layer of apricot jam, chocolate whipped cream (I don’t know if it’s chocolate or cocoa, but there’s a bit of rum, I think), more apricot jam, chocolate sponge, and cocoa powder on top. It’s probably the closest to the classic recipe, but unfortunately, it’s a little bit dense and dry, like so many of the cakes previously mentioned.

In the absence of any true effort to renew and improve them, some of the classic Hungarian desserts are starting to show their age. As regular readers of this blog know, I don’t believe in narrowly adhering to old recipes just for tradition’s sake. Since the Rigó’s inception over 120 years ago, generations of chefs have perfected moist cakes, airy mousses, rich chocolate glazes, and recorded all their work in precise recipes. Ignoring this progress is simply stupid. So get ready for my next post: I’m bringin’ Jancsi back!

Very enjoyable article about Rigo Jancsi. You are saying Clara is the famous one? Wrong! We’ve never heard of her but everyone knows Rigo Jancsi. Because of the cake, of course 🙂 Didn’t know about the Toulouse-Lautrec lithograph about them, thanks for this valuable tidbit.