Every year around Easter, I invariably muse that it would be nice to post an Eastern European lamb recipe on these pages, and then realize that lamb isn’t really eaten with any regularity in that part of the world. Lucky for me, there are a few exceptions in regions with a Muslim population, in the Balkans, and in a some pockets populated by the sedentary descendants of forgotten nomadic Turkic peoples. One example of the latter is Cumania.

Cumania (Kunság in Hungarian) is divided into Little Cumania and Greater Cumania, both located within a Budapest-Szeged-Debrecen triangle in the Great Hungarian Plain. This is the land of the Cumans, former horse-riding warriors who, after Mongol attacks in the 13th century, were offered refuge in Hungary by King Béla IV. Over a mere few years, the Cumans converted to Christianity, fought the Mongols, were betrayed by the Magyars, went on a rampage of destruction through Hungary, left for the Balkans, and were invited back by the same but now defeated King Béla IV to repopulate a region that had become almost uninhabited after the Mongol raids.

But what matters to us today is that the Cumans’ main activity used to be animal husbandry, with a predilection for horses, cattle, goats, and sheep. And according to George Lang, Little Cumania (Kiskunság) remains the the only Hungarian region where lamb is consumed with some regularity year round. Not that there are many Cuman recipes around, mind you. The ones I’ve found aren’t all that different from other Hungarian dishes, either. In fact, the only recipe in George Lang’s Cuisine of Hungary called Cumanian something is a Cumanian mutton paprikás with cabbage. Besides that, still in Lang’s book, there’s a shepherd’s millet (similar to kasha, with diced lamb, onions, lard and paprika). I also found, in A Magyarok Asztalánál (a cookbook in Hungarian), Cumanian peppers stuffed with rice and veal (no lamb), in a cabbage-paprika sauce. Other than a taste for cabbage and paprika, it seems hard to grasp a distinctive Cumanian cuisine, and it’s safe to say that today’s Cumans eat pretty much the same as the Magyar who surround them.

No wonder then that today’s recipe took a lot of soul searching and has been over five years in the making (it also didn’t help that I worked on it only once a year). To summarize, I wanted something with lamb, cabbage, and paprika, inspired by other familiar Hungarian dishes, but a little bit more festive than paprikás or kasha. A Sunday showpiece other than a leg of lamb, that would instantly evoke the distinctiveness of the occasion. And so I give you… Cumanian Lamb Wellington. Beef Wellington is a preparation of beef tenderloin coated with mushroom duxelles, wrapped in prosciutto, then in puff pastry, and baked. My Cumanian Lamb Wellington is none of these things, but it’s close:

I complete the dish with a couple of sides that add even more Cuman-ness and Hungarian-ness: a lecsó (vegetable stew with paprika) inspired by George Lang’s recipe, and cabbage galuska, the Hungarian equivalent of spätzle. 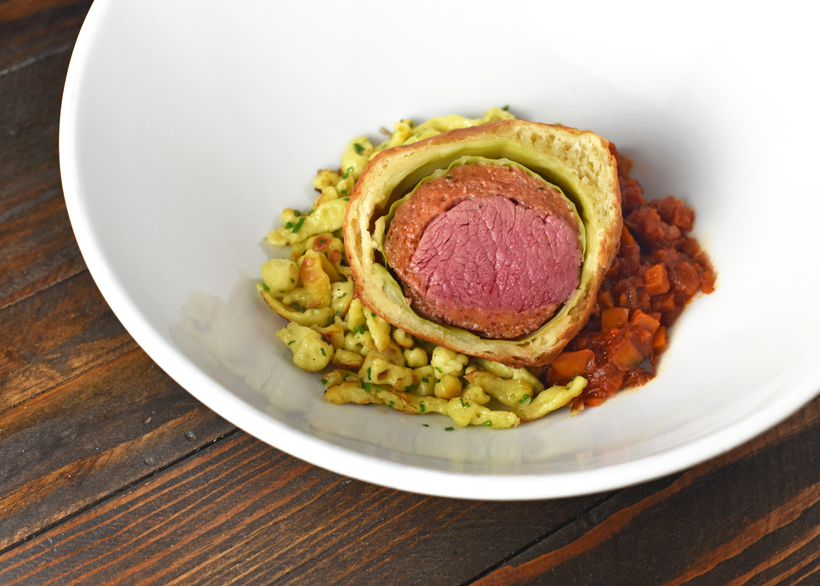 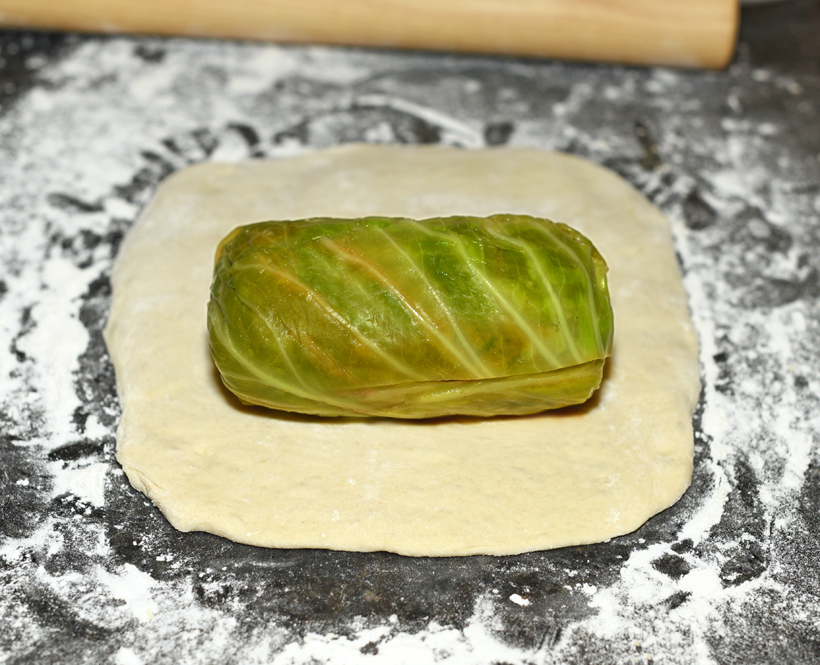 its very nice and looks very tasty, thanks for sharing always good things with us.