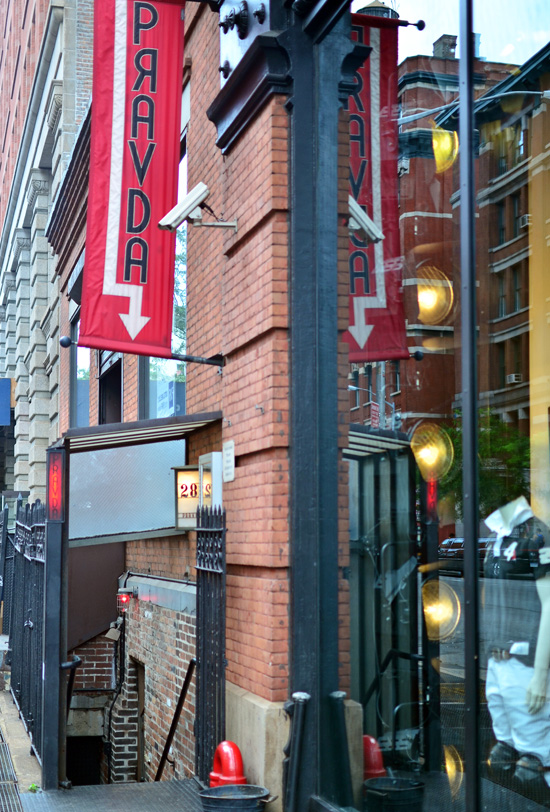 Opened in 1996, Pravda, in Nolita, is a creation of restaurateur Keith McNally, the man behind hits like Balthazar, Pastis, Schiller’s, and Minetta Tavern. As such, half of New York has probably had drinks there at one time or another. What many may not know, however, especially if they’ve been indulging themselves with too many martinis, is that the place is also a restaurant. With the bar’s hype long gone and the once iconic concept of mirror-and-lights bar shelves repeated ad infinitum throughout the city, it’s long since been time to check out what the food’s worth.

This task is actually not as easy as it sounds. The Cyrillic-chic decor and light are very very dark, and you can barely see what you’re eating. In fact, when I looked at some pictures I took with my flash, I realized that some of the dishes were plated a bit hastily — was the kitchen swamped, or do they work in the dark, too? On the upside, the low light is perfect to play old Tarkovsky movies (Ivan’s Childhood, when we visited) with live piano accompaniment.

The menu’s not very long, but still enough to satisfy a variety of cravings. The selection of Russian dishes is even smaller. In fact, I get to review them all in this post, except for the half-Russian, half-boring plate of cheese, cured meat, paté, and herring. For the rest, there are several brasserie/steakhouse classics (crab cakes, mussels and fries, steak frites, mini burgers), plus an entire section dedicated to pizzas (including one with caviar, though for $18 I wouldn’t set my hopes too high). Oh, and there’s the caviar menu: overpriced American sturgeon, and more reasonably priced paddlefish, salmon, and trout. 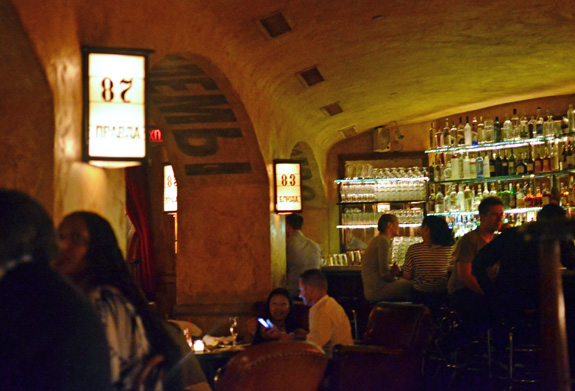 I must confess we used a Groupon deal when we visited the restaurant. As usual, on paper, the offer sounded borderline orgiastic: caviar! vodka! champagne! But as usual which such deals, in the end, we just got what we paid for…

We started with the caviar sample, which consisted of exactly 12 g (0.4 oz) of caviar, ostensibly for 2, with enough trimmings to eat a good ten times as much fish roe. When you check out the picture below, the whole thing just looks ridiculous. The real caviar menu (not the Groupon deal) features more generous portions, typically 1 oz per person. The caviar was slightly salty, but had a good sturgeon roe taste. The buckwheat blini were very good, but most of the other trimmings, while common in restaurants, were totally unnecessary — I’ve never understood what kind of boor eats caviar with raw onions and capers. The tray came with 2 shots of vodka: Jewel of Russia (“the drink of the Czars”), the waitress told us, though to me they tasted more like Nemiroff (the drink of the diner on a budget). I’ve got nothing against Nemiroff, I just don’t like being taken for an idiot.

The zakuski platter let us try most of the Russian appetizers at once. The spinach and cheese pirozhki were good, though not really my thing as I’m not that keen on spinach. The eggplant dip on toasted bread was also good. I’d say it was mixed with hummus and lemon juice, which conferred some bitterness and acidity to it.

The scrambled eggs with caviar garnish, served in a pie shell, were just OK, with the “caviar garnish” tasting a lot like lumpfish roe. The very good potato pancakes with smoked salmon were very crispy outside and tender inside (were they deep-fried?).

The lamb shashlyk, nicely spiced with hot pepper but slightly over-salted, was served medium-rare. The mint yogurt went very well with the meat, and the baked tomatoes and grilled onions, cooked to perfect doneness (as opposed to half-raw like in many Russian restaurants), offered rich, condensed flavors. The American white rice mixed with a lot of butter somehow wasn’t bad either. Except for the meat being too salty, this was a well-prepared classic. 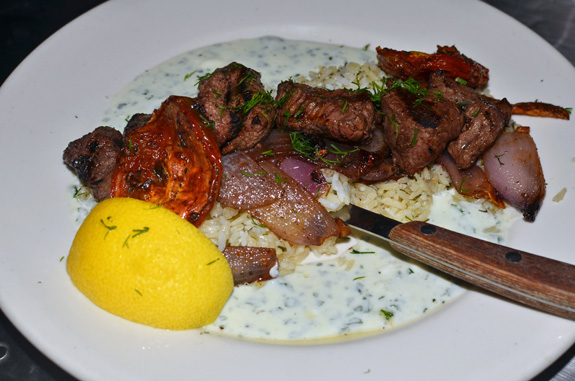 Since we ran out of Russian dishes to try, we gave a shot to the mini burgers. They turned out to be very good, though unoriginal: they came with the usual raw lettuce, onion and tomato, the brioche bun was fresh but (as often) masked the other flavors a bit, and the meat was cooked rare, as ordered, with a nice char. The fries were excellent, crispy outside and soft inside, and tasted of potato. Going to a Russian restaurant in New York to eat a burger is usually suicidal (it’s gross) and masochistic (there are so many well-known great burger joints to choose from) — Pravda’s mini burgers might be the exception that proves the rule. 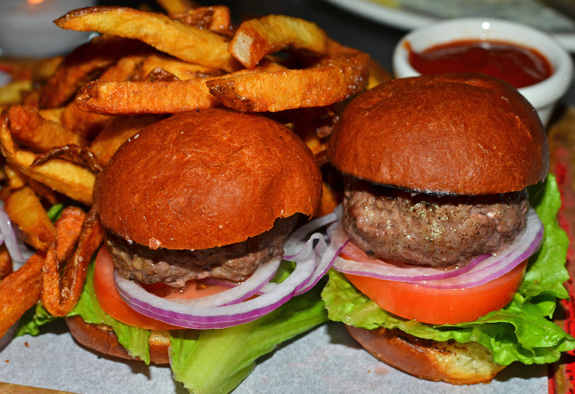 The dessert menu continues the mix of Russian and non-Russian dishes. Our plates came with two glasses of mediocre sparkler, courtesy of Groupon. The Russian profiteroles consisted of a slightly-heavier-than-usual choux puff with hazelnut ice cream, all components good though a bit heavy: too much dough, and not enough ice cream or chocolate sauce. This reminded me a bit of the napoleons at Baku Palace, where one can choose between the regular French version, and the Osip Shmov (you know, the Russian Joe Schmoe) version. These profiteroles were rather Osip Shmov.

If you spent the 90’s in a cave or your parents’ basement, here’s your chance to taste the once-trendy molten chocolate cake. Pravda’s is a fairly canonical version, on the sweet side but loaded with chocolate and therefore hard to resist. I tasted cinnamon in the sour cherry compote, which isn’t as good a pairing as cinnamon-blueberries, but wasn’t too intrusive, either. The two mint leaves in the whipped cream completed the passé tone.

The place being primarily a bar, you have plenty of drink options. The short wine list counts more champagnes than red, white, and dessert wines all together. My advice would be to explore the cocktail list and the large selection of vodkas instead. We tried a fig-infused vodka that didn’t smell like much but tasted surprisingly good.

While being neither very Russian nor very original, Pravda could teach a few lessons to the more genuine eateries of the city with dishes like their potato pancakes and lamb shashlyk (despite the little salt problem), Stay away from the coupon deals, enjoy a few drinks, and you should have a pretty good meal like in 1999. Yeah, the menu could use an update. 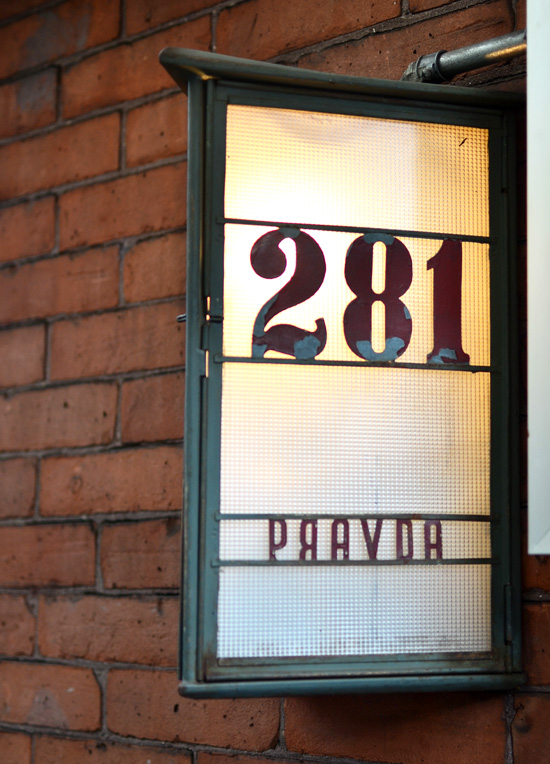 Goulash Sauce (and a Stew, Too)