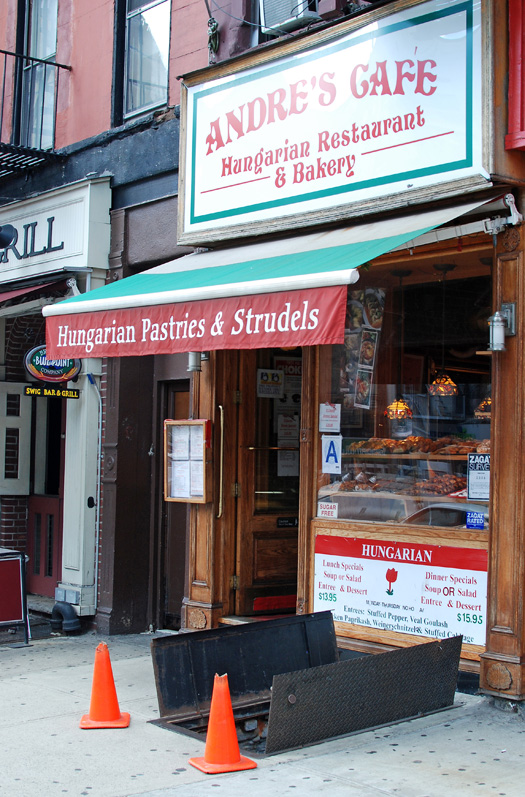 Once upon a time in Yorkville, on the Upper East Side, there was a whole Hungarian neighborhood centered around the Hungarian House and its library, and a handful of churches such as the Church of Saint Elizabeth of Hungary, the Hungarian Reformed Church, the St. Stephen of Hungary School and Parish, and the First Hungarian Baptist Church.  There is unfortunately very little of it left in terms of ethnic food. Mocca Hungarian Restaurant, one of the last Eastern European restaurants in the neighborhood, shut down in 2004 after more than 25 years of existence. The Hungarian Meat Market closed after a recent fire (but is hopefully reopening soon). The only remaining options are to buy a ticket to Budapest at Molnar Travel, or eat at Andre’s Café.

Andre’s Café is both a restaurant and a bakery, but I will focus on the savory food in this review. Passed the pastries in their refrigerated windows, a room decorated with Hungarian bric-a-brac seats about 20 people, a good half of which are likely to be Magyar (the other half includes a sizable contingent of other Europeans). There’s even a sort of bar with three lonely stools in the back.

The menu lists a number of sandwiches, wraps, panini and salads geared toward the lunch crowd. Things get a lot more interesting with the dinner courses, including sections dedicated to savory palacsinta (pancakes) and strudel, and exclusively Hungarian entrées. 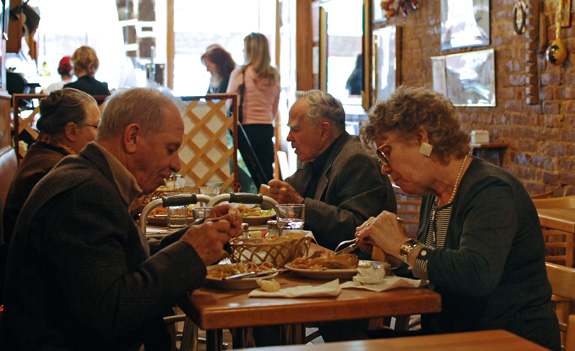 In the cold appetizers, the country platter featured some great (though not house-made) Hungarian salami and smoked, spicy sausage.  The rest — hard boiled eggs, cooked ham, tomatoes, green peppers, red onions and muenster cheese — could have come from the nearby supermarket and was just average. 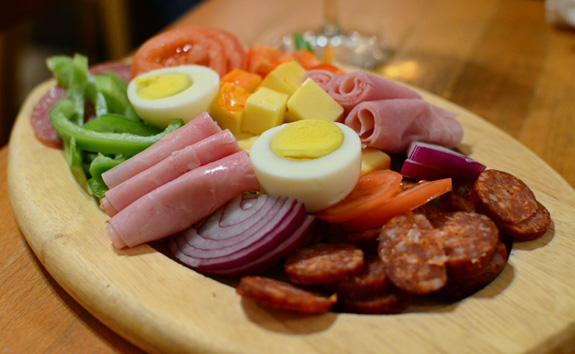 The smoked ham and potato strudel was wrapped in perfect, crispy dough, and the filling was good but mostly meat, with not enough potato. Of course, there had to be a miserable leaf of lettuce on the plate. It just goes so well with strudel. 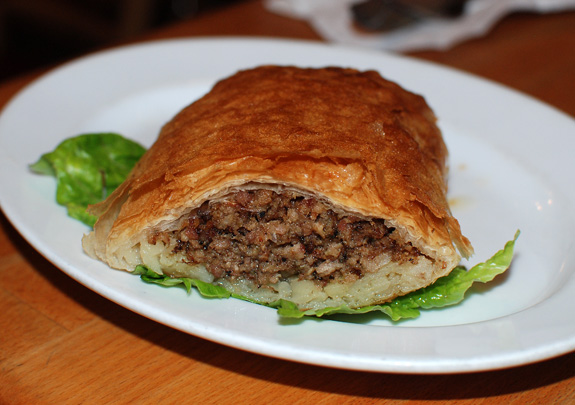 The meat palacsinta was probably made fresh that day, but it arrived so hot inside that I’m pretty sure it was reheated in the microwave. The filling of ground meat with potatoes was nice but quite peppery. 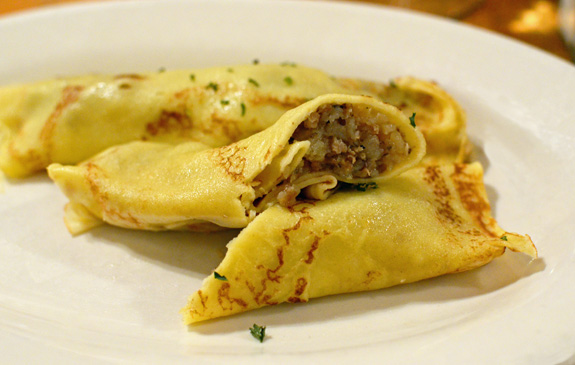 The hortobagyi palacsinta, a pancake filled with stewed chunks of chicken and served with a creamy paprika sauce, was probably microwaved as well — that would explain why the sauce was broken! While the pieces of chicken were tender and tasty, the sauce was  a bit thin and lacked paprika. 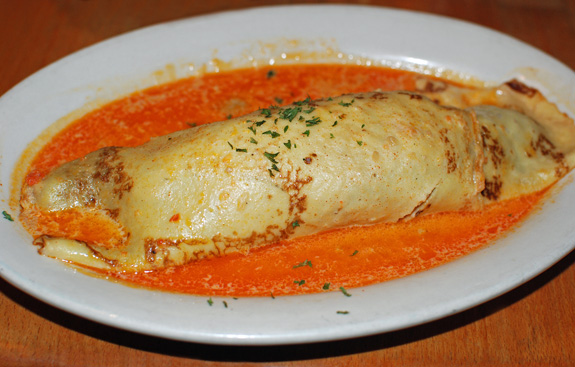 What is it with Eastern European restaurants systematically stuffing their customers with 2 pieces of schnitzel? I worked in an Austrian-American restaurant for several years, we always served a single piece of meat, and nobody ever ordered a second entrée! The meat here was too dry, the potatoes were OK. Notice that the miserable lettuce leaf was back. 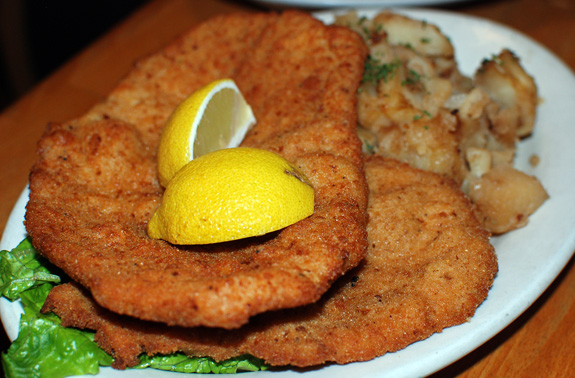 The veal goulash was very tender, maybe a bit too seasoned but fine when eaten with the nokedli (Hungarian spaetzle). Purists will certainly notice that this looks more like a pörkölt than a typical gulyás. 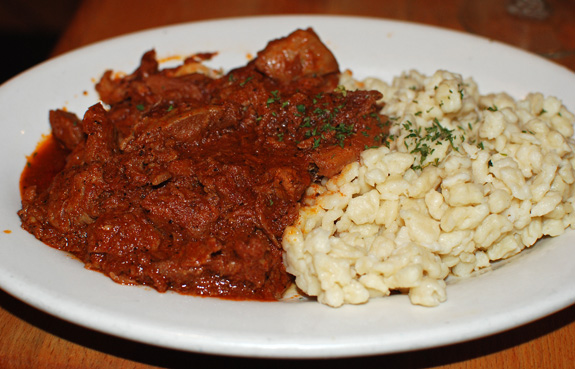 The “layered potatoes” consisted of not-so-layered but perfectly cooked potatoes mixed with 2 kinds of tasty sausages and hard boiled egg, with sour cream on the side. A simple dish very well prepared. 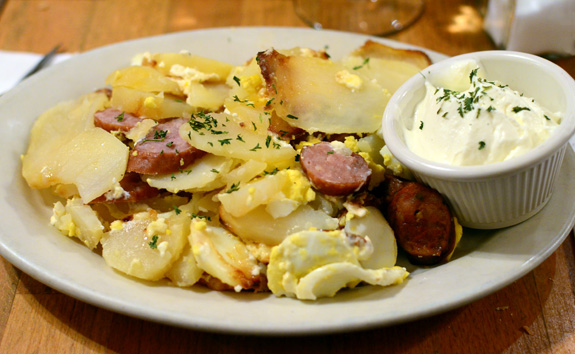 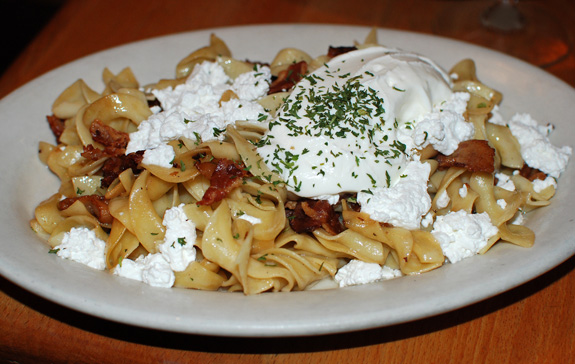 It’s worth mentioning that the restaurant offers a small selection of affordable and refreshing Hungarian wines — my personal preference goes to the Hárslevelű and the Tokaji Aszú.

The savory dishes at Andre’s Café are all about Hungarian comfort food. No modern cuisine here, everything is very traditional, the strudel dough is exceptional, and the most rustic entrées tend to be the best. There are pros and cons of course: the execution is pretty good, but then, that’s not all that hard.

I’ll be discussing the desserts separately, in my soon-to-come Bakery Review!

LOVE Hungarian cuisine. My cousin in law is Hungarian and her mother makes the best food. I must try this out. She makes the best cupcakes ever too. It’s adapted from a traditional Hungarian cake of like 10 layers. SOOOO amazing. I must go here – thanks for sharing.