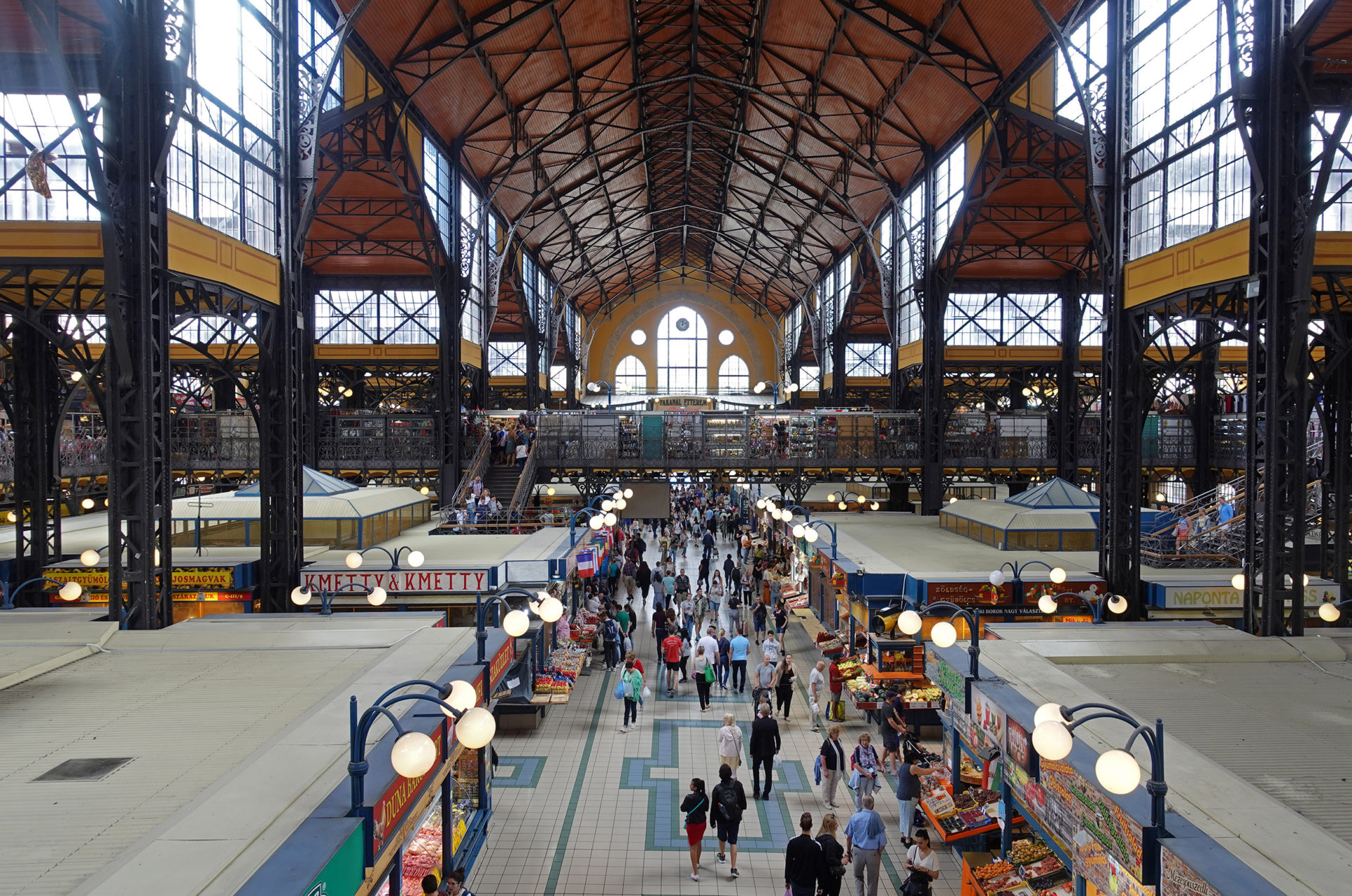 Located on Fővám Square at the end of pedestrian Váci Street, the Great Market Hall (Nagyvásárcsarnok in Hungarian) is the largest and oldest indoor market in Budapest. The creation of this iconic building is a credit to the tenacity of one man: Károly Kamermayer, first mayor of the Hungarian capital.

A jurist, soldier, and politician with an interest in public sanitation, Kamermayer takes the helm of the recently unified Budapest in 1873 (before that, there were the separate towns of Pest on the east bank of the Danube, and Buda and Óbuda on the west bank). He’s also known for his love of gastronomy and lends his name to the Kamermayer torta, a layer cake with hazelnut buttercream topped with chocolate. The cake has long since fallen into oblivion, but the man’s achievements, including the Great Market Hall, remain.

During the second half of the 19th century, the area population more than quadruples. This poses severe challenges to the food supply, the conditions of which keep deteriorating and causing illnesses. When he takes office, Kamermayer announces his plan to build a modern sewage system and a network of covered markets. However, the local authority has limited financial means, and mostly manages routine administrative duties. At the same time, the Long Depression of the 1870’s isn’t favorable to large investments. Not until around 1880 is Budapest is able to adopt a more ambitious budget. A committee is created to draft a proposal for the establishment of the market halls, and its report recommends placing the central hall on Fovám Square, on the site of the salt depot. One of the main objectives of the new markets is to ensure that only food that’s been inspected can be sold on the premises, in order to guarantee quality and freshness.

Things still move slowly. Politicians keep arguing about which sites to choose for the new buildings, while conditions further deteriorate and the food supply chain grows more disorganized. After a resolution from the city’s general assembly in 1891, the project finally begins. The central market building is designed by architect Samu Pecz, who worked on several churches across the country. Construction is completed in 1897. Of course Kamermayer, who retired the year before, participates in the opening ceremony.

World War II causes significant damage to the building, and it remains abandoned for several years. In pure Central European fashion, little is said about its reopening and operations during the communist era; we know it remains in poor condition. In 1991, it goes bankrupt and closes its doors. Only after a renovation and a conversion from goulash economy to market economy (a sensible step for a market!) does the building re-open again, just in time for its 100th anniversary in 1997. Today, the Central Market Hall continues to be one of the most popular tourist attractions in Budapest, a success fueled by the twofold increase in tourism to this city since the beginning of the new millennium.

As an aside, for the curious visitor, here are other historical market halls: the Downtown Market on Hold street (which also hosts some trendy restaurants upstairs), Klauzál Square Market Hall (which specializes in high-quality Hungarian food produced by small family farms), the Fehérvári Street Market (in Buda)… Over the last few years, some of the most beautiful of these halls have been renovated.

Still, none of these other markets have the grandeur of the Great Market Hall. The neo-gothic style of the entrance gate as well as the many arches and cathedral windows around the building betray the architect’s ecclesiastical background. Behind the stone facade, a steel frame holds over 10,000 square meters of market stalls on three floors. Another distinctive architectural feature is the roof, which was restored with colorful Zsolnay tiling from Pécs.

The market is a mix of locals and tourists, the locals buying produce, meat, or fish, and the tourists just walking around, maybe grabbing a bite and buying large bags of paprika or other souvenir destined for a similar fate at the back of a cabinet. There’s also palinka, Tokaji wine, and foie gras – at the Great Market Hall, there’s a food hungaricum for everyone, tourist and local alike, even if few Hungarians buy their palinka here and few tourists take home tubs of sauerkraut. Let’s take a look at some of those hungaricums…

What would Hungary be without paprika, a spice made from ground dried red peppers? Well, believe it or not, you wouldn’t have to go that far back in time to find out, only slightly over 200 years! All capsicum varieties descend from wild plants native to North America (in particular what’s now Central Mexico), where they’ve been cultivated for centuries. Peppers were originally brought to Spain in the 16th century and spread throughout Europe and Asia. They were most likely brought to Hungary by the Turks. At first, peppers were treated, along with potatoes, as exotic ornamental plants and adorned the flower gardens of aristocratic castles. But at the end of the 18th century, they gradually became a popular (because cheaper) substitute for peppercorns, and Hungarian cuisine was never the same again. Peppers even became a symbol of Hungarian identity over Germanization and were used as preventive medicine during the cholera epidemic of 1831.

Paprika turned into an industry, and Szeged in the Southern Great Plain region became its capital. It’s in Szeged that was devised a machine to separate the red flesh and skin, which give paprika its color and flavor, from the white ribs and seeds, which are the source of peppers’ heat. With the application of this process to the right varieties of peppers, sweet paprika was born. Thanks to its milder aroma, it secured a comfortable spot in haute cuisine: even Escoffier included a recipe for the humble goulash, featuring paprika, in his Guide Culinaire.

Today, there are many types of paprika – in addition to many types of fresh and dried peppers. Reading packages, you’ll notice a few recurring words that appear in various combinations: sweet (édes) or noble sweet (édesnemes), delicate (csemege), hot (csípős), strong (erős), smoked (füstölt)… You can even buy paprika or goulash pastes in tubes!

In the meat department, well, Hungary is famous for at least two products: foie gras and dried sausages/salami. It’s the world’s second largest producer of foie gras, far behind France and a bit ahead of Bulgaria (production in other countries is negligible to non-existent). Unlike in France, the majority of the fattened livers in Hungary still come from geese, which require longer breeding but yield a tastier product than ducks.

While it’s hard to say why, of all the counties in the region, Hungary specifically became known for its fattened goose livers, we do know that the history of foie gras is closely tied to the history of Jewish migration. Production of foie gras in Hungary began when the first Jews settled there in the 11th century. As Judaic dietary law forbade pork and dairy products mixed with meat, Jews were left with olive oil (you don’t see too many olive trees in Central Europe), other plant oils (boring), and schmaltz (yummy rendered fat from poultry) as the main cooking fats. The choice was easy, and since geese could get a lot fattier than chickens, especially when overfed, they were preferred for the fabrication of schmaltz. Foie gras became a byproduct of this process – a very appreciated one! If, today, it’s often served as a terrine, other preparations still better reflect the Jewish heritage: the liver can be fried or roasted, then chopped and mixed with hard-boiled eggs and sautéed onions, just like deli-style chopped liver.

In addition to canned foie gras (which you can buy in any store), the market sells fresh vacuum-sealed fattened livers from both ducks and geese, as well as fresh magrets and legs.

There are dozens of kinds of sausages in Hungary, made mostly from pork and often with paprika. Traditionally, families in the countryside slaughter pigs in the winter months and fill their larders with bacon, fat, and sausages. Fresh pork sausages are grilled and eaten with potatoes or bread, mustard, and pickles. Also popular májas and véres sausages are prepared with liver and blood, respectively, most often mixed with rice.

The two most common dried sausages are the Gyulai and the Csabai, and both were awarded Protected Geographical Indications from the European Union. The thin Gyulai sausage, named after the town of Gyula, is made from pork meat, garlic, paprika, and caraway seeds, then cold-smoked and dried. It won a gold medal at the Brussels International Exposition of 1935. The Csabai sausage, made in the town of Csaba (aka Békéscsaba, only 20 kilometers away from Gyula), is somewhat similar to the Gyulai, but thicker and spicier. Two kinds of salami (thicker than the dried sausages) also have a PGI: the Budapest winter salami and the Szeged salami. Both are made with lean and fat pork mixed with pepper, paprika, and allspice, then cold-smoked and air-dried.

Other than sausages and meat, you’ll also find cracklings (töpörtyű in Hungarian), a byproduct of making lard. What do you do with cracklings, other than eat them like chips and gain 50 pounds? You use them in pogácsa, the highly addictive scone-like savory pastry! Which is why the market also sells ground cracklings. Other than that, you salt them generously and serve them with raw onion and bread. Inevitably you’ll get thirsty, so you’ll want to have a beer and maybe a palinka or two. Great tavern food, in other words.

Hungry yet? Head to the upper level to grab a bite: nothing fancy, just homey dishes and Hungarian snacks. But despite the meals, the hungaricums, the meat and fish, the produce, the chocolates, and the sweets, one thing’s still missing: bring back the Kamermayer torta!