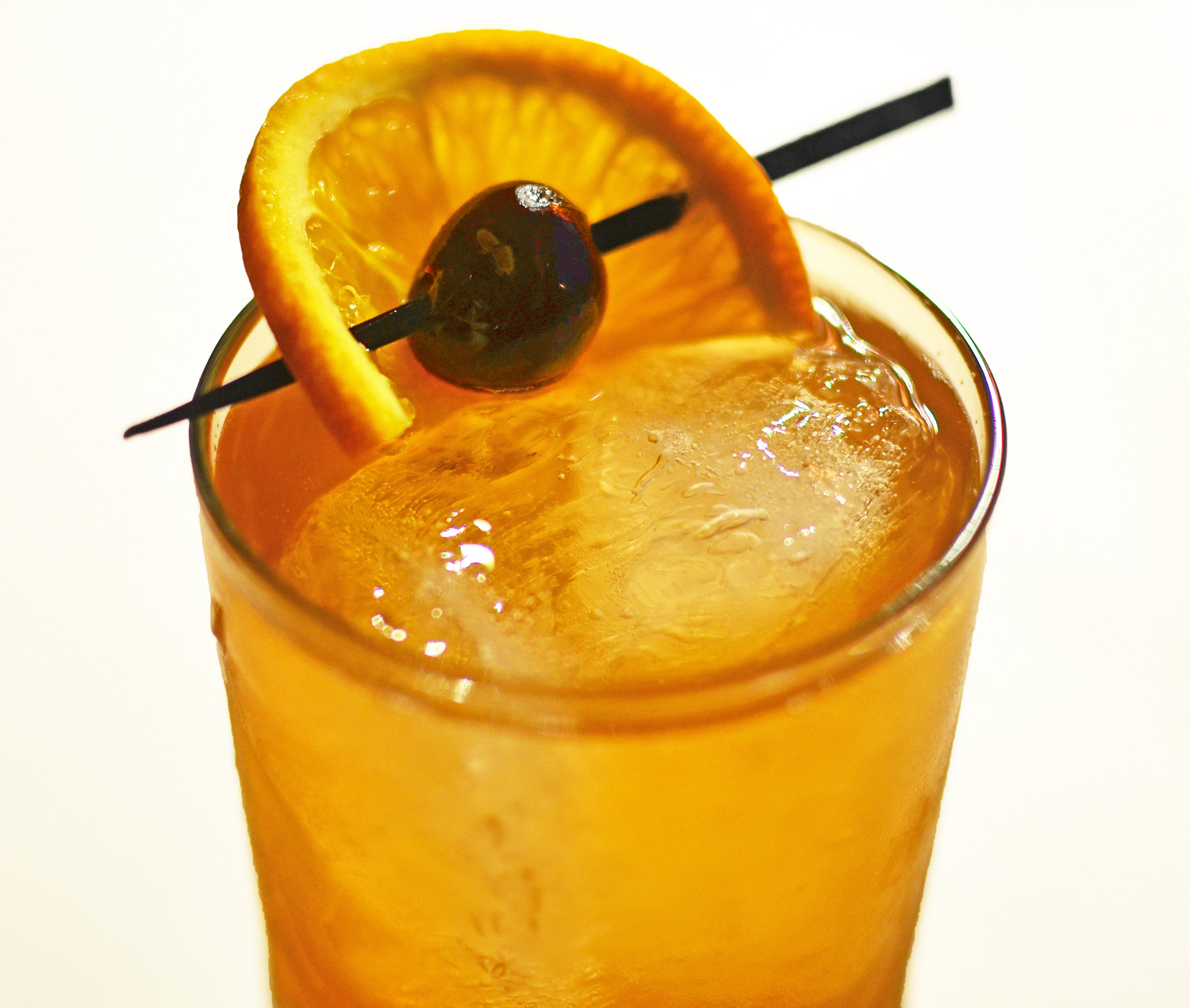 You might remember Brasserie Pushkin, the ephemeral New Russian restaurant that attempted to reproduce a Moscow institution in midtown Manhattan. I certainly wasn’t the only one thinking that the food didn’t quite meet the expectations set by the high price tags. The owner himself seems to have taken the pulse of other local high-end eateries, and realized that his kitchen couldn’t compete. So he shut down the Brasserie after nine months, and upped his game by starting a new project with two Eleven Madison Park alumni. The result is Betony.

The cuisine went from New Russian to New American, but the location stayed the same and so did the decor, more or less — even the chairs weren’t used long enough to be worn out. At most, the ostentation was toned down a little (the chandelier’s gone). 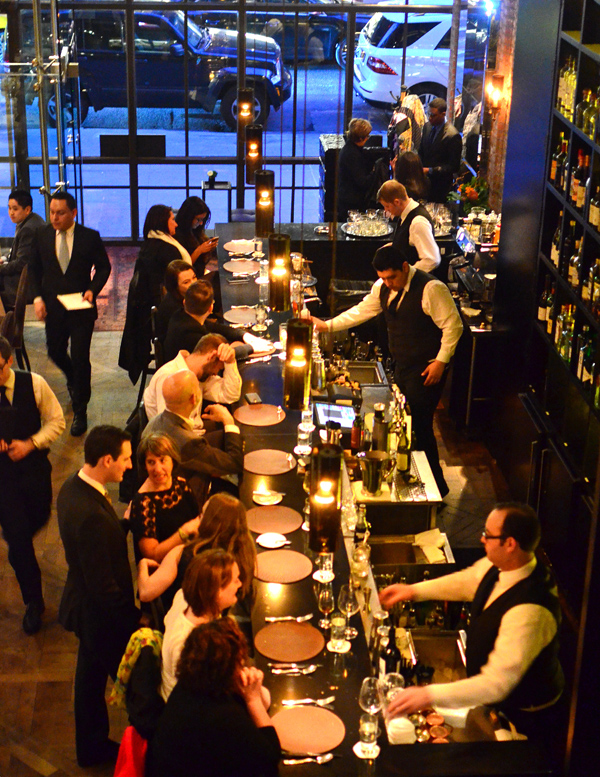 The new restaurant and its chef, Bryce Shuman, have multiple accolades: James Beard Award nominee for Best New Restaurant in 2014, one star in the New York 2015 Michelin guide, and more recently, an inclusion in Food & Wine‘s list of Best New Chefs. It therefore comes as no surprise that people are lining up at the OpenTable virtual reservation desk to try the food. But I had a slightly different motivation for visiting Betony, and in fact did not even realize that it was Brasserie Pushkin’s unlikely successor until I arrived and saw the familiar space. Me, I came for the Czech Mate. 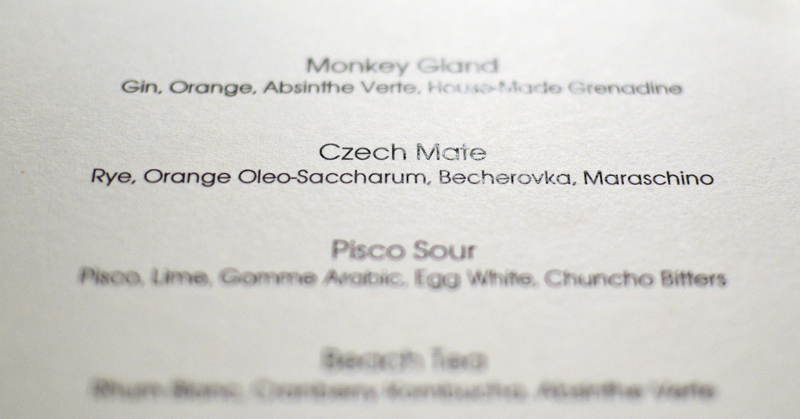 You see, while normal people use their free time to catch up with their friends on Facebook or tweet about their daily routines, I apparently read restaurant cocktail menus online. Whether I’m hoping to stumble upon a beverage worthy of a Red Alert, or just waiting until the clock strikes 5:00, I’m not sure. But with a name like that, the Czech Mate got all my attention, especially once I saw that it was made with the infamous Becherovka liqueur. Could anyone make that vile herbal potion taste good? (The most assiduous readers of this blog will also notice that Becherovka isn’t even the only ingredient of Eastern European origin in the description. Here’s a hint.) 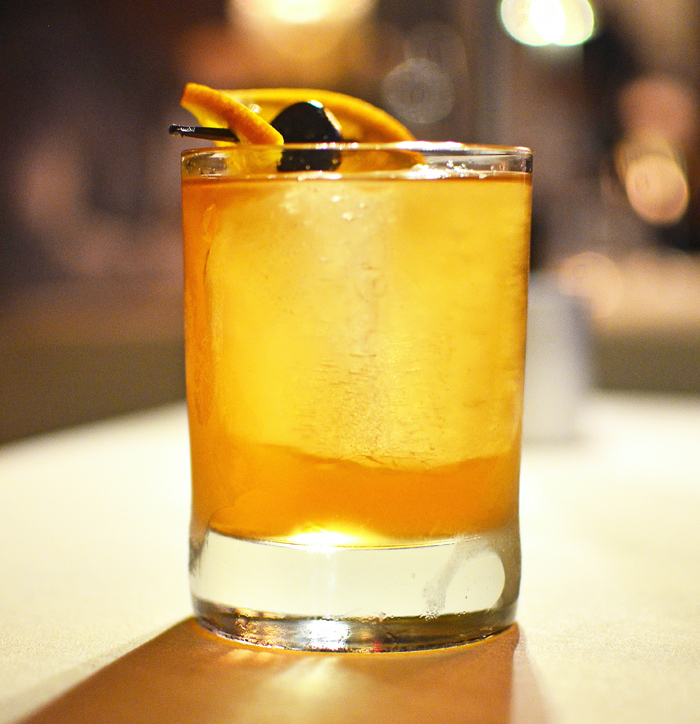 The secret is simple: use as little Becherovka as possible. With a giant ice cube and a full-flavored rye whiskey, you barely notice it. As with every respectable cocktail menu in New York these days, most libations at Betony contain at least one ingredient I’ve never heard of, leaving me confused as to whether I should feel old or just out-pretensioned. In the Czech Mate, the unknown would be the Orange Oleo-Saccharum. It’s not something you’ll find on the shelf at the grocery store, although it does share something with your typical house-cleaning product: citrus oil. Upon inquiry, I learned that it’s a syrup made with sugar that’s been vacuum-sealed with orange peel, thus extracting some of the orange oil.

Fear not! The cocktail tastes much better than Lysol or Mr. Clean. Just like that household chore muscle man, it’s very strong. The taste is of rye whiskey first, followed by the sweet orange syrup mixed with a hint of spices and herbs from the Becherovka. The Maraschino cherry on top is excellent (and it’s the real deal, not the bright red sugar bomb), but I don’t think there’s any Maraschino liqueur in the drink itself. 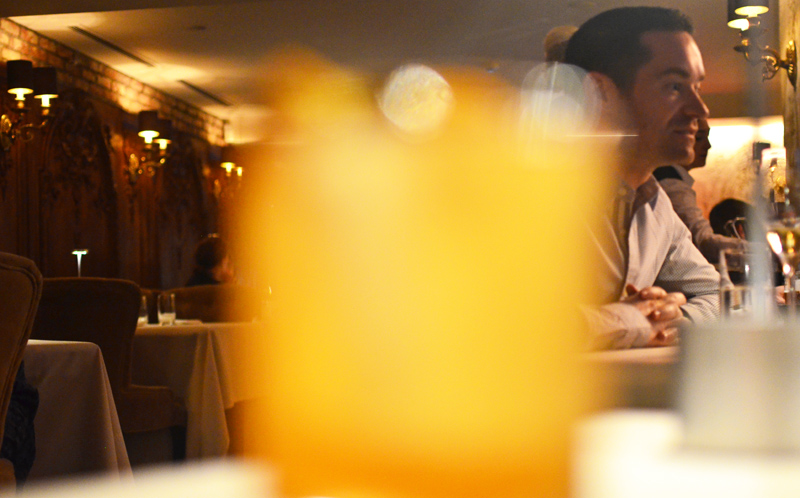 Disarmed by the Czech Mate, we decided to stay for dinner. And it turns out there are other Eastern European touches at Betony, albeit pretty subtle. A dill bread, baked to order and very light, served with an airy mixture of butter and yogurt. An amuse-bouche of salmon, cucumber, and dill. A pig’s head — well sort of… 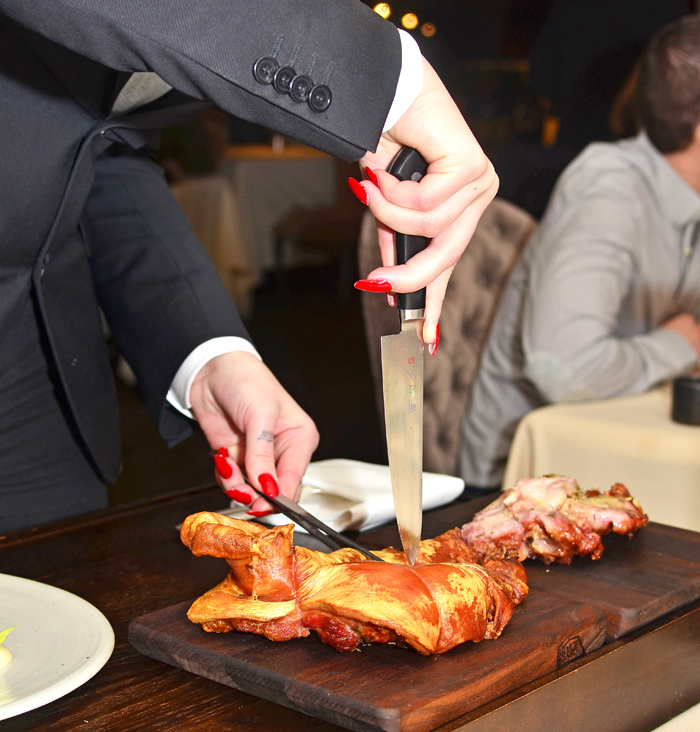 Betony’s pig’s head is a feast that serves two people (adventurous solo diners can also order half a head, upon request). It’s not at all presented as Russian; most of the garnishes are Alsatian in origin, and so is the ridiculously overpriced wine that the sommelier recommends with it ($44 a glass, but hey, it’s poured from a magnum, oooooh!). That being said, nowhere does one see more pigs’ heads than on display at the food markets of Eastern Europe (like this one). So in addition to tasting pretty damn good, Betony’s rendition offers a few good ideas for my own recipes. 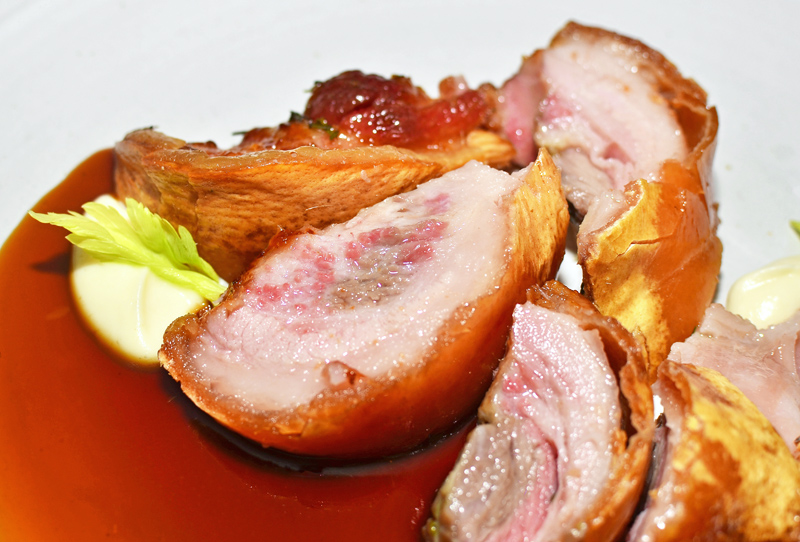 The head comes to you in two servings. First, the incredibly tender meaty and greasy parts (the cheeks, mostly) are carved tableside and served with a sauce. Second arrives a small salad made with the crispy pig’s ear, tongue, and breaded fried brain, completed with fresh herbs. 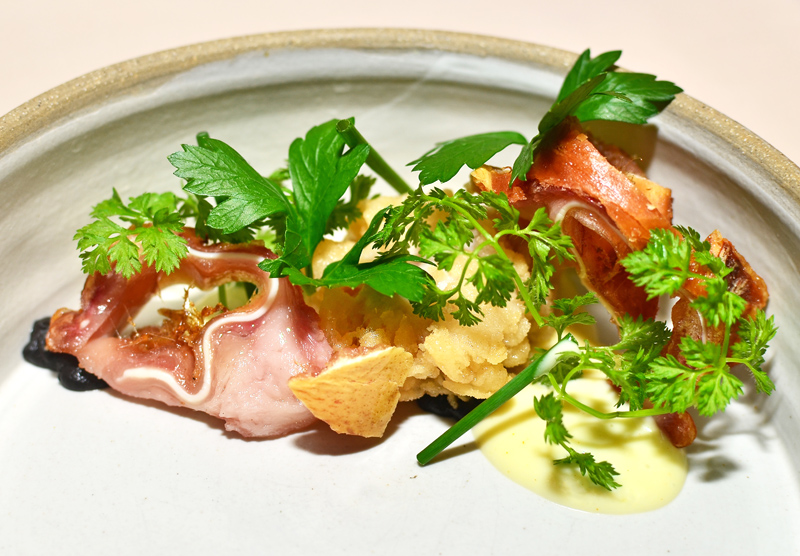 There’s also a plethora of accompaniments. A tarte flambée, with onions and bacon on top of a thin crust base, and a kind of boudin blanc, served with whole-grain mustard, both very good. Bowls of mustard greens and fennel “choucroute” are less memorable. This is half of Alsace’s specialties on your table all at once, right there! Come hungry, because eating all of this as one part of a four-course prix-fixe requires serious stomach room. 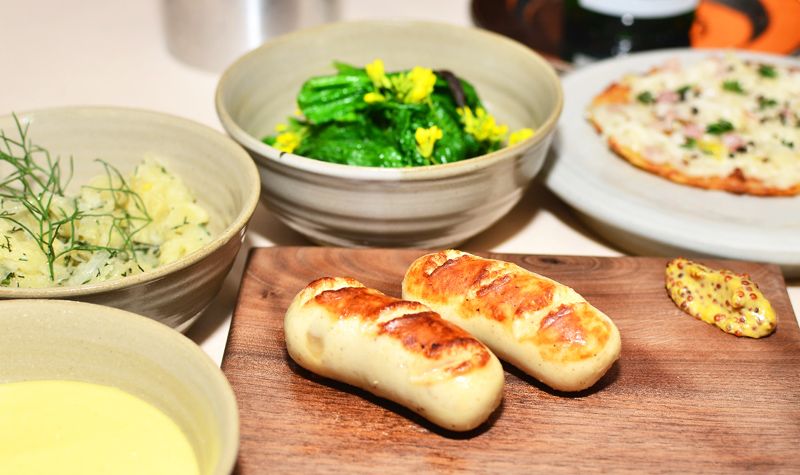 This was probably the most remarkable pig’s head I’ve ever eaten. (How often do I eat pig’s head, you may ask? More often than you think!) Betony may be the only Michelin-starred restaurant to serve pig’s head. This is one of very few places that can make Becherovka drinkable. And if you’re missing Brasserie Pushkin’s food, just take advantage of the ruble’s moribund exchange rate and catch a round-trip flight to Moscow to eat at the flagship restaurant on Pushkin Square. 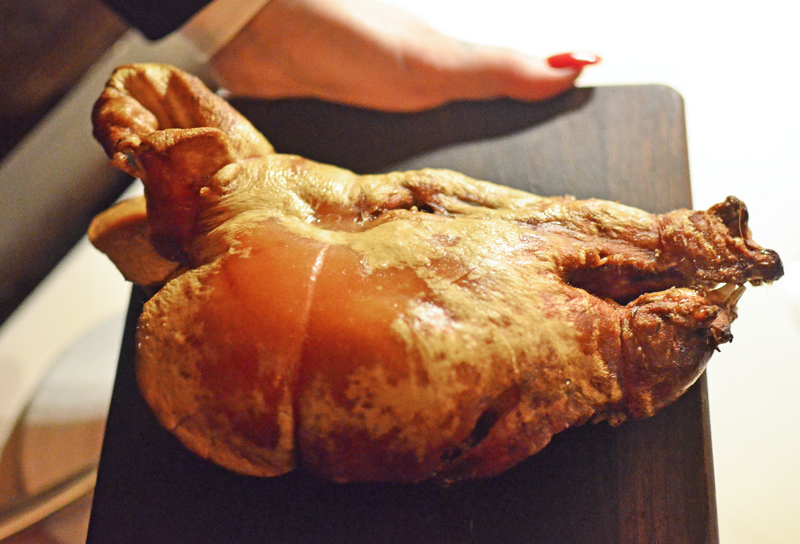 Becherovka is really shocking 🙂
Your report on the pig’s head is really a great read. I wonder how pig’s ear, tongue, and breaded fried brain taste like. I once had pig’s ear in Spain in a bar (kind of a stew) but was not very impressed.
The waiter / waitress with the long red finger nails cutting the pig’s head is cool. I would be scared that the nails break while working.