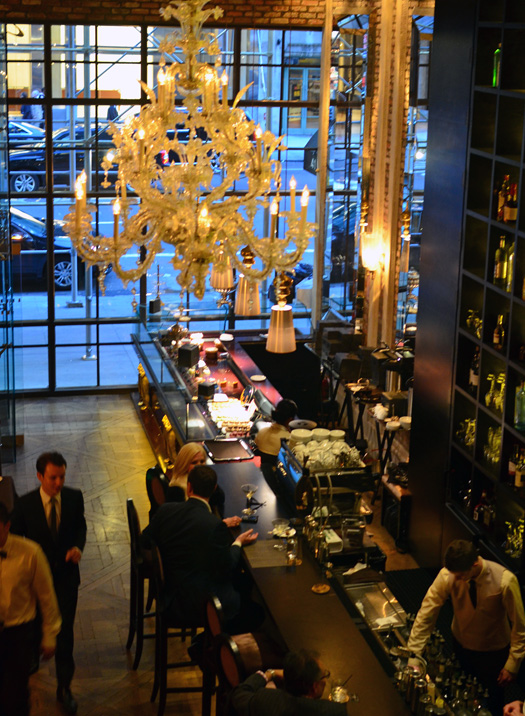 Russian restaurants seem to be opening faster than I can visit them these days. I feel like I was dining at Onegin only a few weeks ago, and yet here comes Brasserie Pushkin, an establishment with somewhat similar pretensions, in West Midtown. And things are quite confusing indeed! Onegin, the restaurant, is named after Eugene Onegin, a novel written by Pushkin, the poet. Pushkin, the brasserie, is the New York outpost of Pushkin, the café in Moscow, which was created to make up for the poetic license taken by Gilbert Bécaud in his slightly saucy hit song “Nathalie”, written in 1964. The French crooner, too busy hitting on his blonde Russian guide, probably had in mind the Literaturnoye Cafe (admire the rare .su web site!) in Saint-Petersburg, known informally as Café Pushkin because the poet regularly dined there.

Save for the unfortunate scaffolding that covers the building’s exterior at the moment, the two-level setting does a good job creating the kind of atmosphere that, we imagine, makes Russian oligarchs feel right at home: elegant waiters, wood interiors, plush chairs, chandeliers, and macarons. Only false note: one of the waiters reminded me of Deee-Lite‘s Super DJ Dimitri. 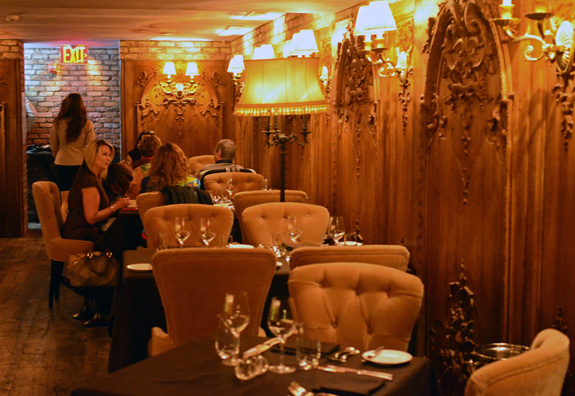 Before reading further, take a look at Ryan Sutton’s recent review for Bloomberg.com. I certainly don’t agree with everything he says (is he really implying that the food at Veselka tastes remotely good?!?!), but I was amused.

Following the format of the Moscow flagship, the menu imitates a newspaper where articles of little interest are interlaced with food items in sometimes random order. The result is a rather extensive selection of Russian dishes with a French inflection: half a dozen salads, about as many soups, more than a dozen appetizers, five fish and five meat main courses, and a good choice of overpriced sides.

Let’s start with the pickles: two kinds of cucumbers, two kinds of cabbage, and tomatoes, all quite good if you like pickles. My preference went to the cherry tomatoes, only slightly acidic and still sweet inside. 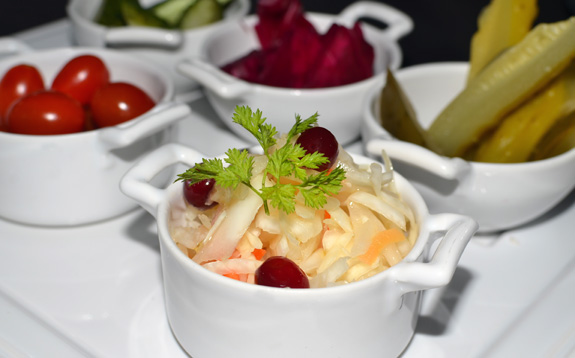 The sturgeon galantine tasted more like shrimp than sturgeon, which makes sense when you look at the picture (it was too dark in the restaurant to get a clear idea then). The olive tapenade in the background tended to overpower the rest of the dish.

The salad Olivier is certainly meant to impress… if the last time you went to a restaurant was circa 1960. Seriously, this presentation is worthy of a George Lang cookbook cover! The recipe was fairly close to the original recipe, which is commendable — check out my post here for a little bit of historical background. The center of the dish consisted of potatoes and crawfish topped with caviar (paddlefish roe, I think). The fairly tasty caviar didn’t compensate for the complete blandness of the crawfish. The mixture of smoked chicken on the sides reminded me of deli meat. Disappointing. 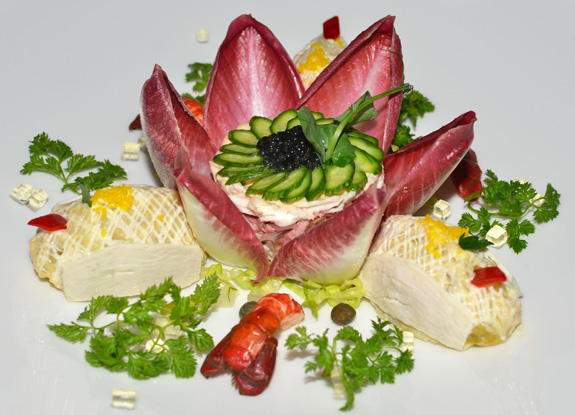 The pirozhki came with three fillings. The cabbage one used a brioche dough but hardly tasted like cabbage because it was mostly dough. The beef one was tasty, made with a cut of meat that reminded me of oxtail, but the dough was way too sweet. The mushroom-potato one was the best, with a great ‘shroomy flavor. 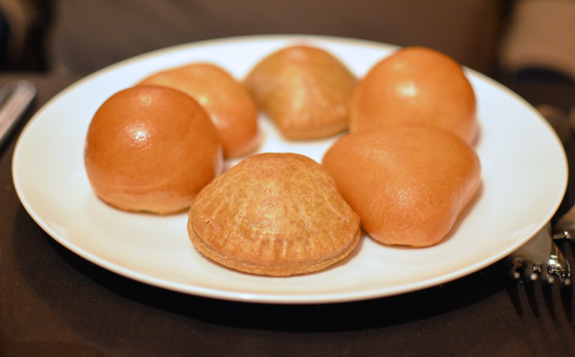 The steak tartare illustrated well the problem we started to face with Brasserie Pushkin. The presentation was superficially very nice, but… tartare really does not need to be served in an overpowering puddle of vinegar — it’s not because the meat is served raw that you should try to mask its taste! The little garnishes offered different tastes in each bite, which was a good idea in theory (the quail egg worked best), but… what was I supposed to do with the onion, mustard, and chives in the front of my plate? I didn’t have any need (or room) to mix them with the beef! 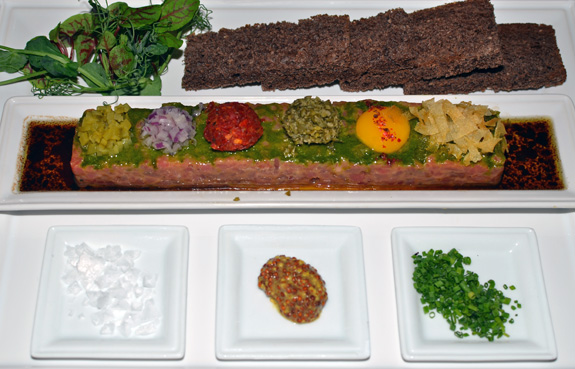 The pelmeni can be ordered as an appetizer, a consommé, or an entrée. Paradoxically, you don’t get to choose the meat filling, a flavorful blend of lamb, pork, and beef. 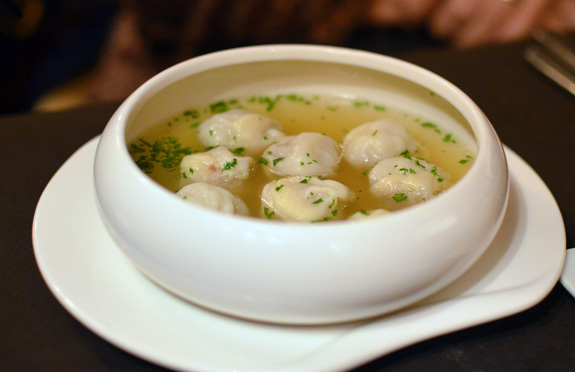 The dish was good, but the mixture was slightly too compact and not juicy enough, a common issue. It’s actually not so easy to make great pelmeni. The consommé version (shown above) was better than the version served alone (shown below), as the broth helped to compensate for the lack of moisture in the filling. 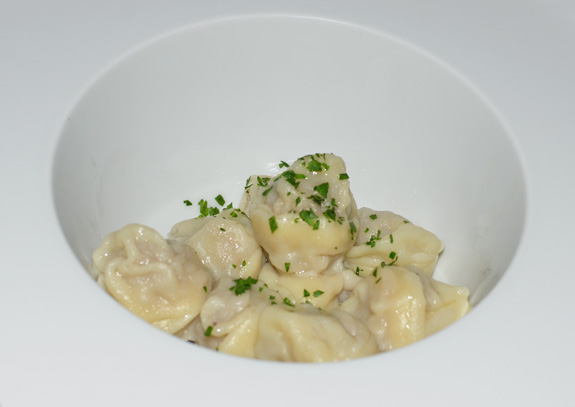 The veal Pojarsky, advertised as the signature dish and also available as a burger, was something I remembered trying at the Moscow café. The taste of greasy bread and cream was rather subtle; some might find the cutlet bland and lacking meat, but I quite liked it. Ryan Sutton complained that it tasted like a Chicken McNugget, and I tend to agree, but why is that a problem? I’m not above admitting that the McNugget’s success resides in its ability to transcend the taste of chicken and achieve something more pleasant: it doesn’t taste like chicken, it tastes like Chicken McNugget. And it’s addictive. What’s wrong with producing the same result with top-quality ingredients? As a matter of fact, a few years ago, I created a Pojarsky recipe that followed this very principle — top quality veal with roughly the same fat/carb/protein/water ratio as the Chicken McNugget. 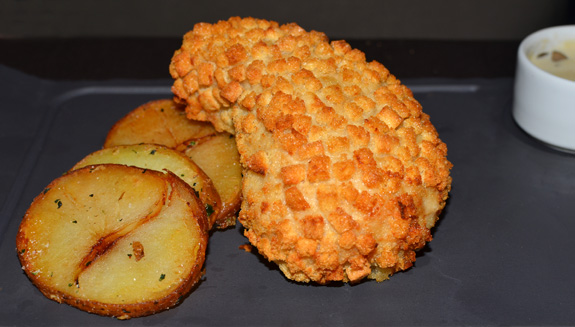 The telnoye, consisted of a pair of salmon and pike-perch cutlets with a very good fish taste. The garnish didn’t really work, though. On one hand, we had a  so-so potato purée  with pieces of overcooked salmon pompously called salmon brandade. On the other, the mushrooms on the plate rim were unnecessarily drizzled with truffle oil (you know, the one that doesn’t contain truffle). Finally, a kind of béarnaise sauce was served in an utterly impractical tuile cone. 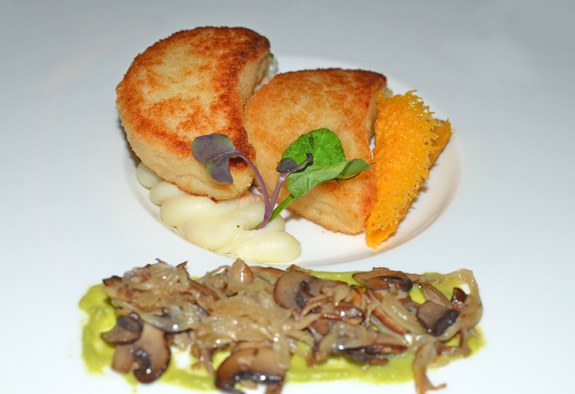 The golubtsy, a well-balanced, airy filling of tasty meat and rice wrapped in slightly undercooked cabbage leaves, was smothered by an overwhelming red pepper sauce. 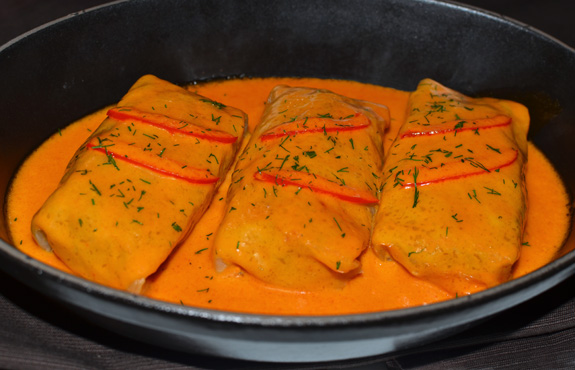 The veal chop, ordered rare, arrived medium well. Yes, it tasted good and was properly grilled, but for $46 was it really too much to ask to get my meat done as I want it? This is one of the most expensive veal chops in town, for Lenin’s sake! (A quick search in my archives returned a $49 contender at Veritas, where it recently turned out that the new chef and his hypertrophied ego didn’t know how to cook a piece of meat either.) The pesto-like mixture on top of the chop wasn’t mentioned on the menu and could just as well have stayed off of my plate. 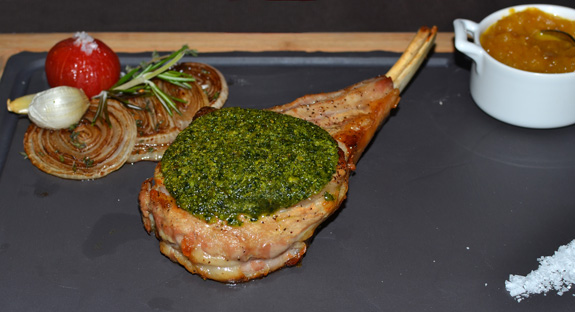 The Russian style country potatoes, soggy fries with mushroom and onions, were OK. But you’d better enjoy every one of them, they cost $12. For the same absurd price, we also ordered some steamed kasha with onions and mushrooms. Whoever said potatoes and buckwheat are a poor man’s food??? 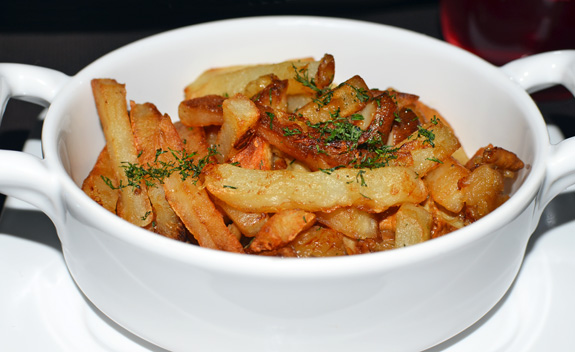 The beef Stroganoff was tender enough, which isn’t a surprise since it’s prepared with tenderloin. It’s kind of wasteful to serve that cut of meat well done, but I guess it’s the nature of the dish; a recipe that dates from a time when people didn’t eat meat rare. Of course, it wouldn’t hurt to revisit this classic a bit. The sauce, made with tomatoes, mushrooms and cream, was very good but just a bit too salty. 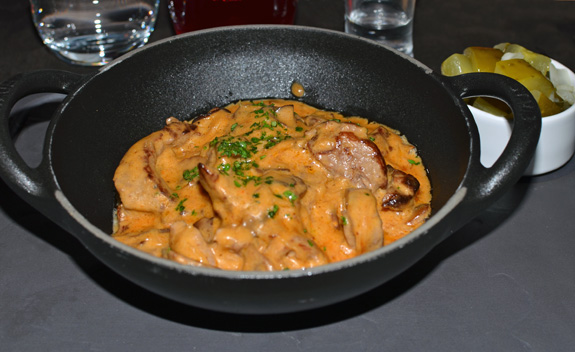 The blinis stuffed with veal had a subtle flavor, so much so I’d say they were slightly bland. They were served with no sauce, just some cream on the side. The meat should have been a little bit moister. 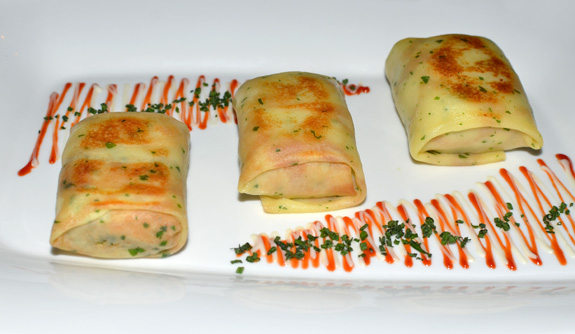 The desserts, created by “World Champion Executive Pastry Chef Emmanuel Ryon,” were a mix of classics (profiteroles, crème brûlée, cheesecake) and original creations served with a bang. I focused on the latter.

The Café Pushkin was a berry-and-nut bomb large enough for two. I enjoyed it, although I would have preferred fewer flavors and more contrast in the textures. As one imagines, the gold leaves on top made the dish taste indubitably better… The medovichok didn’t just bring us a second serving of gold leaves, it also came in a cloud of dry ice vapor, woohoooo! The dessert itself, however, was eaten and forgotten almost as fast the dry ice sublimated. Although the menu described it as a layered cake of dulce de leche ice cream and honey, layered cake had to be understood figuratively. I don’t think there was any sponge in it, and I don’t think the number of layers was much greater than two. The result was nice enough, just not particularly original and the dry ice made it way too cold. The bowl itself also contained a kind of tea-like mixture that I am still not sure was edible. 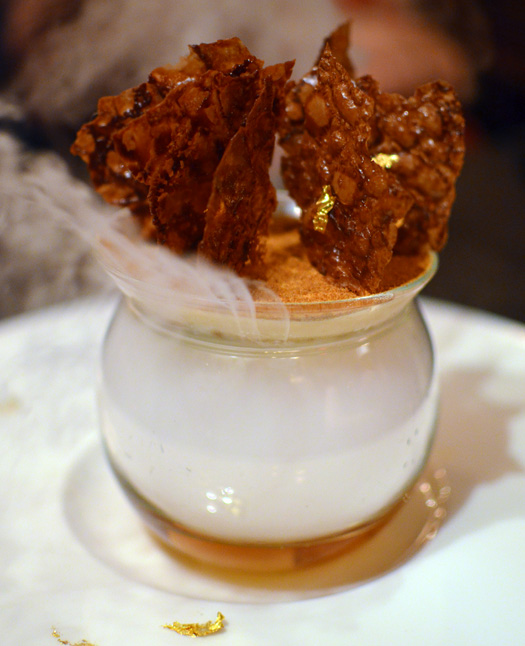 Finally, on the way out, one has the opportunity to buy an assortment of macarons and other pastry shop desserts at the front counter. Since I visited the restaurant around the orthodox Easter, I brought home a kulich, all covered in silver spray (did they run out of gold?). The tall Easter bread was prepared in the style of a panettone, with a rich, airy crumb speckled with a colorful mix of candied fruits. Yummy. All this food was washed down with some cranberry (good) or blackcurrant (excellent) mors — probably a better choice than the expensive wine list. Of course, I had to have vodka with that, especially the one called Hammer & Sickle. I also remember trying a good house-infused cranberry vodka. But beware: with shots at around $15 ($12 for Stoli, $32 for Beluga Gold), it can become a very, very expensive night very, very quickly.

Yes. The food at Brasserie Pushkin generally oscillated between fairly good and very good, and my final rating below reflects that. Some of my descriptions might sound harsher than my rating would suggest! But I’m still not sure the quality justifies the value. A salad Olivier, a veal chop with a side dish, and a dessert would cost you $96 before tax and tip. By comparison, you could have a memorable 4-course prix fixe at Marea (a 2 -star restaurant in the Michelin guide) for $97, or an equally unforgettable 3-course prix fixe at Daniel (3 stars) for $108. Not to mention 4 courses at Hospoda for about $70 (a steal).

The food at Pushkin simply isn’t at that level.  Despite the opulent surroundings and the variety of expensive plateware, the dishes are too often either traditional versions of Russian classics with little creativity, or modern renditions in need of tuning. Plus, before offering a selection of grilled meats at steakhouse prices, it would also be good to learn to cook them to the customers’ specifications.

Cuisine: Russian
Picks: veal Pojarsky, telnoye, blackcurrant mors
Avoid: the vodka (that is, if you want to be able to pay your rent)
Food: 8/10

😀 great review! I’m sure I’m never going there, but had a good laugh… especially when they ran out of gold… 😀
I still love your own Olivier recipe, and determined to make it one day… when I’m up for a long-long day of cooking…

Thanks, Nastya! Let me know if you have any questions about the Olivier recipe. You can break down the cooking into 2 days and prepare the duck the day before.