In a sleepy corner of the Upper East Side, Czech restaurant Hospoda recently opened on the ground flour of the Bohemian National Hall. And unlike its compatriots (such as the nearly homonymous Bohemian Hall) this is not a beer garden. Far from it, in fact, as I would regard Hospoda as the first attempt at Eastern European fine dining in the city. With the Czech Republic’s location in Central Europe, the complete reconstruction that followed independence, and the influx of foreign tourists and investments, it’s not surprising that Czech cuisine would be the first of the former communist bloc to recover from half a century of culinary deprivation — the first restaurant in Eastern Europe to receive a Michelin star is in Prague, never mind that it serves Italian cuisine. 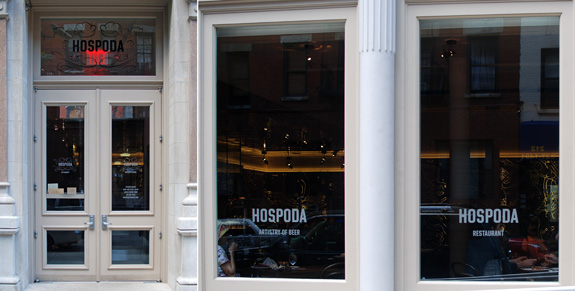 Hospoda means “pub” in Czech, and the place takes its beer very seriously. Only Pilsner Urquell is served on tap, but in four different styles. Beer kegs occupy all of the bar counter, and most of the cellar space that you can see through the glass floor in front of it. Although, since I don’t know of any truly decent place to have a drink in a 20-street radius (and also because I don’t drink beer), I can’t help but think that the space would be better utilized as a full bar area with stools. 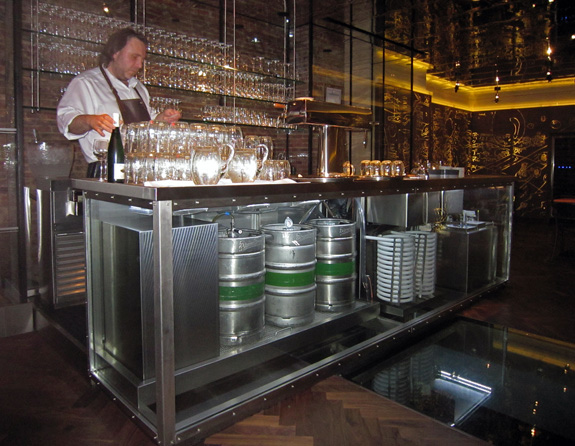 The menu is a rather short list of smallish plates organized as first and second courses (as I write this review, I see it’s been reorganized into 3 sections: Green Market, Chef’s and Czech). Small plates doesn’t mean three ingredients thrown on a board tapas-style, though. Instead, think of them as dishes sized for a tasting menu, with you deciding how many courses you plan to have. The menu changes regularly and many dishes are still being tweaked. Depending on your perspective, you can either commend the chef’s efforts or regret that he doesn’t wait until a concept is finished before putting it on the menu. 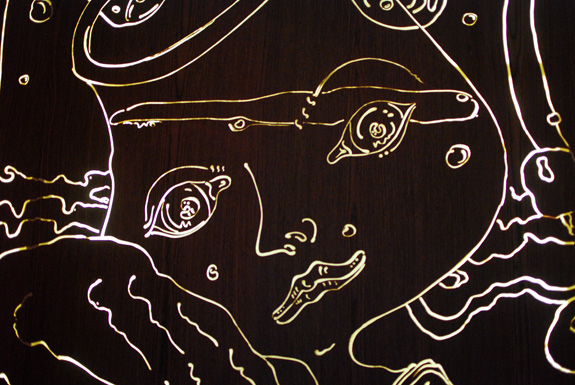 Before getting to the food, don’t miss the homemade raspberry and ginger sodas, which both tasted very fresh: 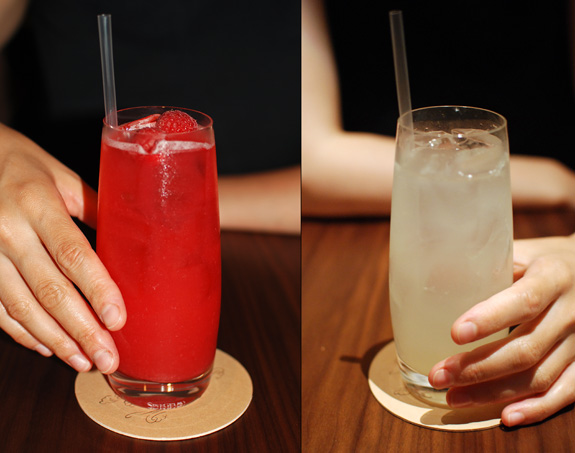 The meal started with two amuse-bouches: an unexpected beef tartar (I’ve never seen anybody eating raw meat in Eastern Europe) and toasts of caraway bread with cottage cheese and radish, accompanied by a beer sample. 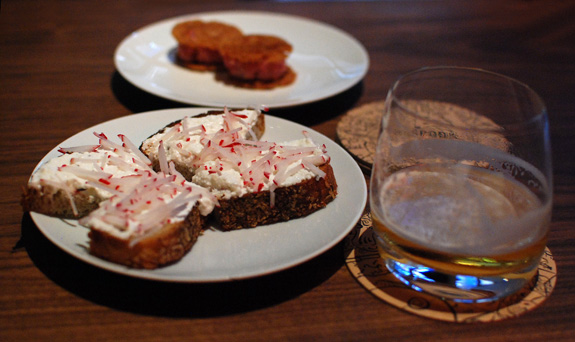 The duck breast with plums, thyme sour cream and shortbread was very nice and packed a lot of plum flavor, topped with little cubes of stock that melted in your mouth. 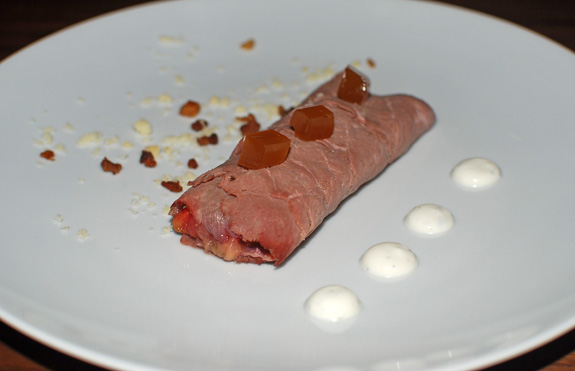 The white asparagus composition gathered many classic flavors — mayo, quail egg, mushroom and bacon. Great execution, but it lacked a little something to be really impressive. 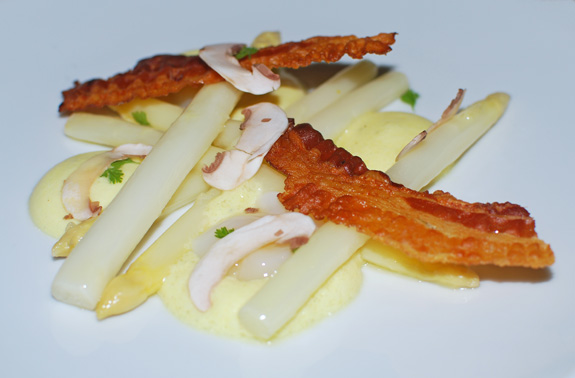 The rabbit aspic, covered with apple and cabbage was also well executed but rather boring, partly because I don’t really like aspic and I find American farmed rabbit bland. 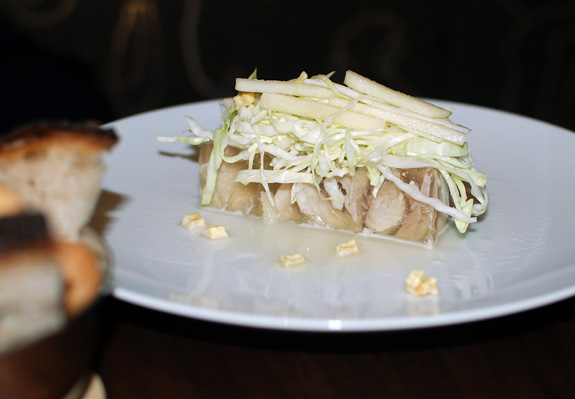 The potato variation offered 5 different preparations of the tuber with a nice variety of textures (purée, foam, chips, boiled, and roasted), mixed with morels, Brussels sprouts and cottage cheese. Although the potatoes tasted very good, some of them lacked salt, and I’d say that overall the dish lacked fat: whether it’s olive oil, butter, lard, or bacon I’m expecting a certain level of grease with my potatoes. I would have made the potato purée with a lot more butter, for example. 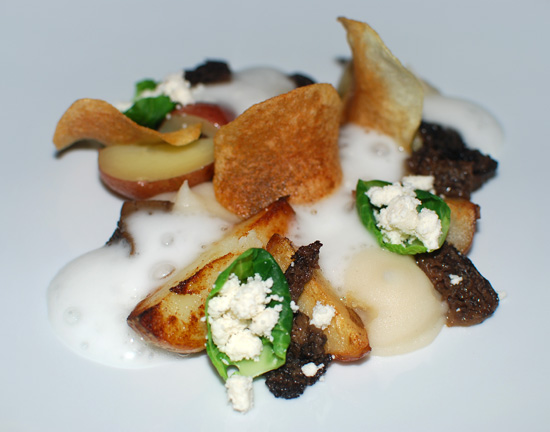 The Prague-style ham with its thick horseradish foam and assortment of expertly picked vegetables was the turning point where the food went from very good to excellent. The salty, smoky meat melted in my mouth and was perfectly balanced by the horseradish. 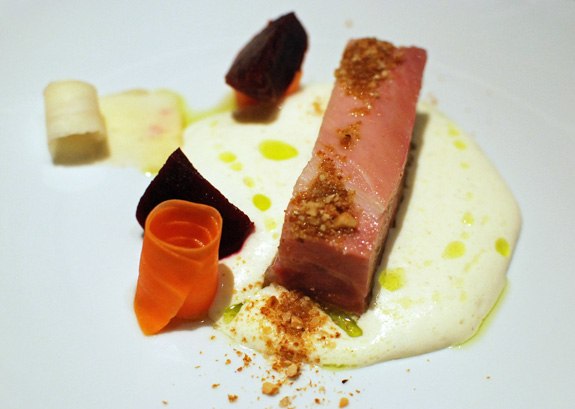 The beef oyster blade with its creamy horseradish sauce and barley dumplings demonstrated the same qualities. The delicious slice of meat (that you may know as the flat iron steak in another context) was tasty, and fatty but not overly so. The slightly heavy dumplings were perfect to mop up the thick sauce. 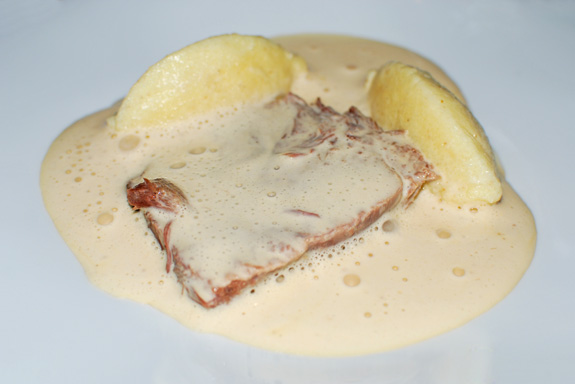 The smoked beef tongue was another melt-in-your-mouth success. I’m not always fond of beef tongue, but this has to be the best one I’ve ever had. The rich, delicious jus and the pickled onions didn’t hurt either. Too bad the yellow pea purée totally lacked salt and tasted rather watery for something that was sold to me as being full of butter. 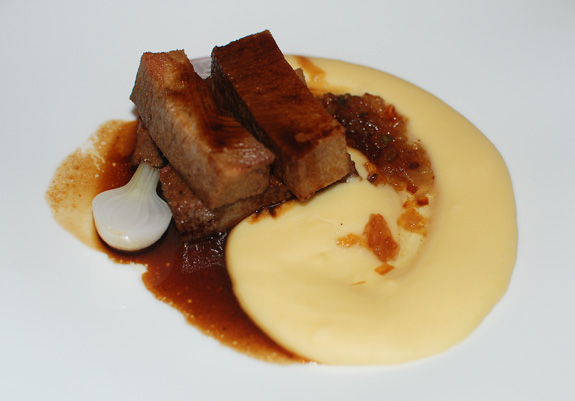 The lamb leg with lentils was very well cooked and had a good lamby flavor, although as with the pea purée, the lentils lacked salt. 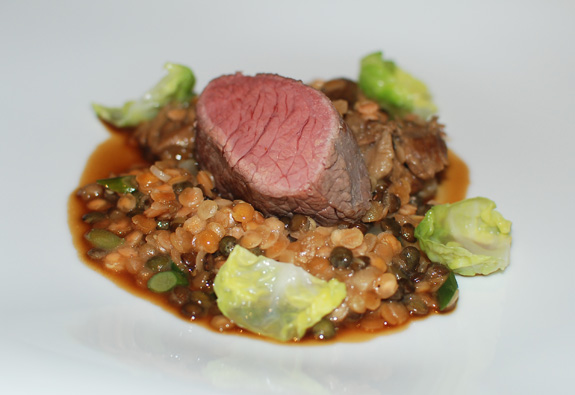 The porcini and egg yolk ravioli — they call them “pasta pockets” — on the other hand, turned out to be problematic. We actually returned the dish because the pasta itself was very undercooked, and the second time around it was still barely cooked but with the egg yolk overcooked. The dish tasted like mushroom but not all that much like porcini (I wonder where they got their porcini from when I’ve been looking for some without success over the past month), and compared to the big yolk, there wasn’t enough mushroom mixture inside the ravioli. 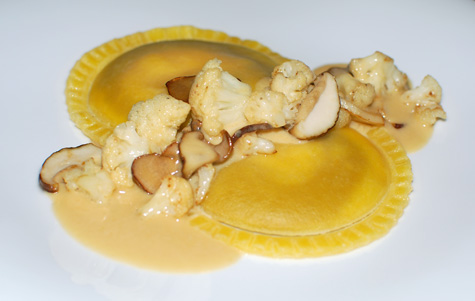 The dessert menu offers a short selection of Czech and not-so-Czech dishes. The profiteroles tasted fine but were disappointing — not disappointing enough to stop us from cleaning our plates under 2 minutes, though! The choux puffs were hard and not puffy enough. They weren’t filled with vanilla ice cream but with whipped cream instead, and the ice cream was served on the side. 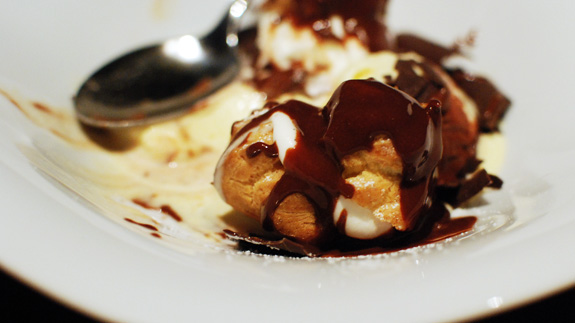 The cherry variations consisted of cherry sorbet, preserve and sauce. The sorbet, which was more akin to a parfait, was the strong point of this tasty dessert. It had a great, almost chewy texture. 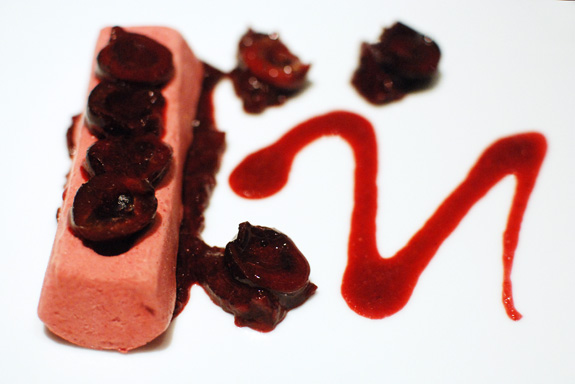 The apricot soufflé with lime and fromage blanc ice cream was equally good, if only a bit too small. All the flavors worked well together. 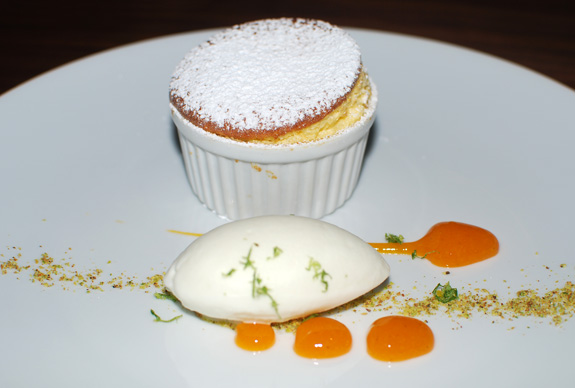 More traditional were the potato noodles. While the pear jam and rum custard that came with them were both very good and the plate very pretty, the noodles themselves were rather plain and heavy. 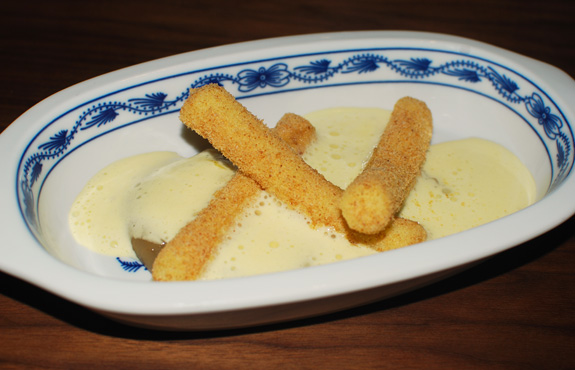 Despite the little ravioli incident, the salt level of certain items and the on-going tweaking of some dishes, Hospoda is definitely several steps above all the other Eastern European restaurants in town, especially for the attention it pays to textures, presentation and cooking techniques — not to forget taste, of course. The restaurant easily lands my highest rating so far!

Hi Florian,
Good to know you’re still cooking. I’ve occasionally dreamed of your salmon mousse. Anyway, I’ll be up in NY in a couple of weeks and was looking for a good restaurant. I think I’ll try this one.
Erica

Hi Erica,
Good choice! It may not be the trendiest place in town, but I promise you most of their dishes are better than my salmon mousse.