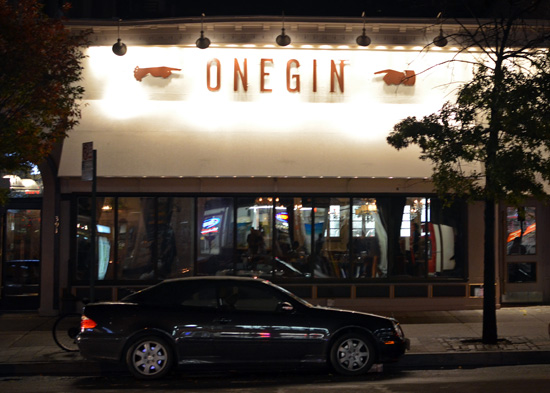 Onegin in Greenwich Village is the latest addition to the Russian restaurant scene. If we’re to believe the web site, it aims to offer “the finest Russian Fusion cuisine that Manhattan has to offer”, and the media have long been drinking the Kool-aid.

The interior keeps its promises of opulence, and Onegin is indeed a very pretty and comfortable restaurant: 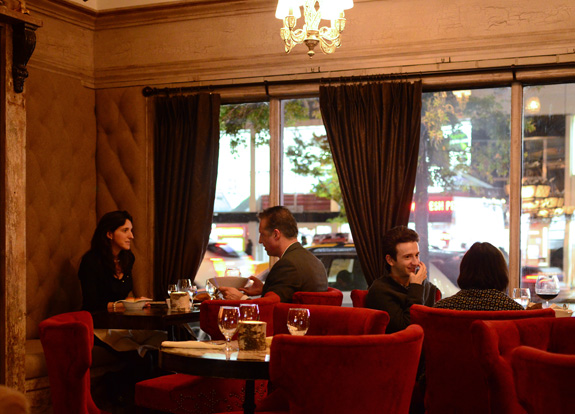 The menu covers the usual Russian classics — blinis, smoked fish and meats, dumplings, borsht, chickens Kiev and Tabaka — plus some more “American” dishes such as braised short ribs or lamb shanks (of course one might argue that Russian cows and lambs have ribs and shanks, too). The brunch consists simply of the same menu without the main courses, and, apparently, without whichever half-dozen dishes that eighty-sixed the night before. 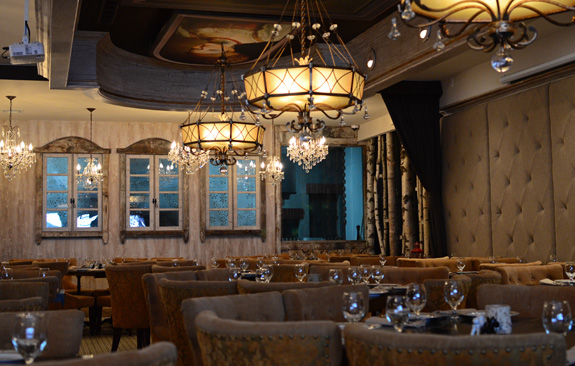 Before we start talking about the food, I have to say a word about the service, as it will considerably affect your dining experience. Even when the restaurant is half-empty, or even completely empty, the kitchen is terribly slow and has no sense of timing. Expect to wait 30 to 45 minutes and then receive a random number of dishes in random order. The waiters are very nice but incapable of paying attention. It’s like they never worked in a restaurant before: you can wave at them a good ten minutes while they’re standing 10 feet away from you. On another occurrence there wasn’t anybody in the restaurant who knew where the wine bottles were kept!

Let’s get back to the food and beverages. Onegin has an inspiring cocktail list. Among the things we tried, the Pomegrate Martini had a pronounced pomegranate taste but was a bit too sweet, while the Birch Imperial, which was supposed to contain birch sap, tasted like sweet champagne and not much else. There will also be a number of house-infused vodkas. I was only able to taste the honey-pepper vodka but it was very good.

Bread. On one visit, the rye bread was very good and the white bread, similar to a Russian baton, was just OK. The next time, both were stale, as if the staff had let them all dry out in their trays overnight. 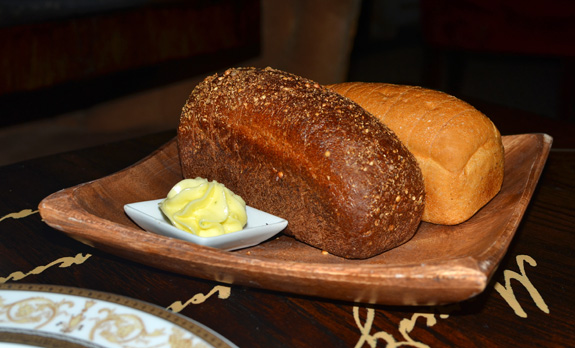 The house-smoked fish delicacies consisted of a copious platter of three different fish. The salmon was excellent, cut into thick chunks the way I like it, its saltiness balanced by a piece of bread. The sturgeon was equally great, without any trace of that muddy taste I don’t like. The third fish, escolar, had a very firm flesh, and was a rather unusual choice, since it is known for its unpleasant health effects and doesn’t live anywhere near Russia as far as I know. 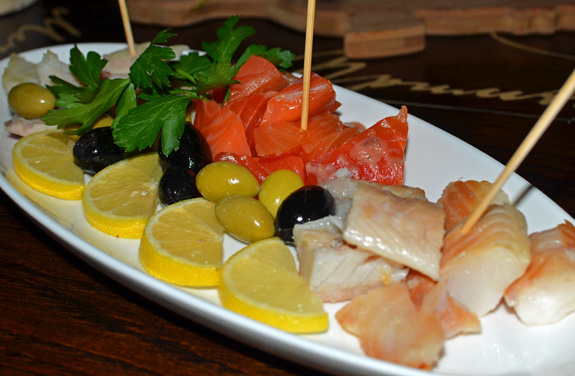 The blini with cured salmon were no different, with thick cuts of very soft fish, but the blini themselves were too sweet. In my opinion, there should have been just a pinch of sugar in the batter. 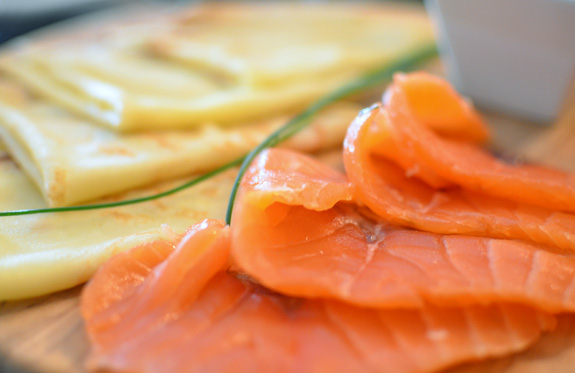 The salo (cured pork fat similar to Italian lardo) was way too salty, even eaten with the bread and mustard. The mustard, in the Russian style, was quite nice, strong and slightly sweet. Notice the crossed chive sprigs that seem to add an undeniable touch of elegance to most appetizers — had I kept them, I would have had a whole bunch at the end of the meal. 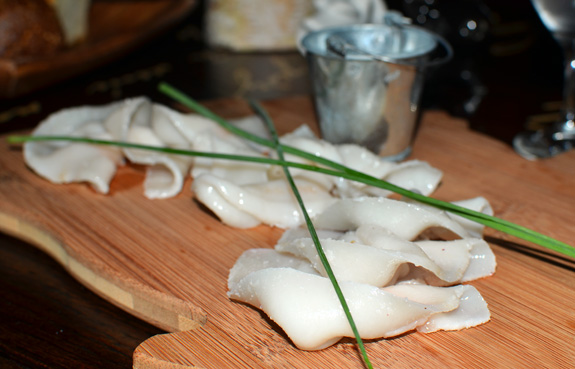 The trio of zakuski included tasty chopped herring (“tar tar”, the menu said), a kind of smelt pâté (which tasted like European sprat and was fine if you’re into that sort of thing) and chopped salo, just as salty as the one above. All were served with croutons. 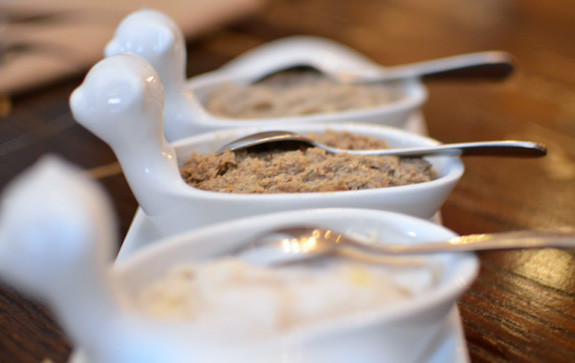 The charcuterie was another great appetizer to share, probably my favorite of the lot. It was salty, but not excessively so (it is charcuterie after all). Great smoked sausage and kielbasa, good bacon, served with mustard, beet horseradish and a weird hot sauce better left untouched. This certainly didn’t need any canned green olives. 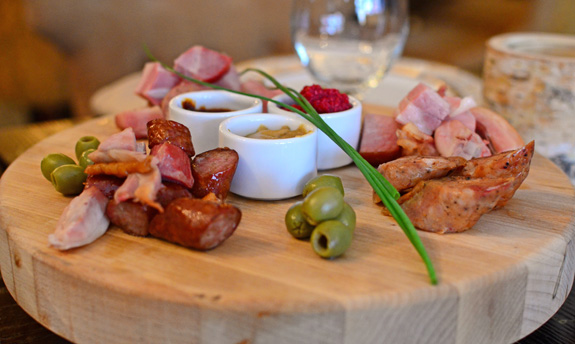 Then the salad Olivier was definitely the worst appetizer. The menu said “an old recipe, over a century in the making”, which is kind of true but rather pathetic. To keep the story short (more on this in another post), the recipe started as the signature dish in a high end Moscow restaurant, but all the distinctive ingredients (grouse, duck, crawfish, caviar) were slowly replaced with cheaper substitutes more readily available to Homo Sovieticus. What we got at Onegin was the terminal stage, the lame Soviet version. Smoked chicken, hard-boiled egg, potatoes, carrots and canned peas bound by a river of industrial mayo. Not surprisingly, the result was boring and just OK. 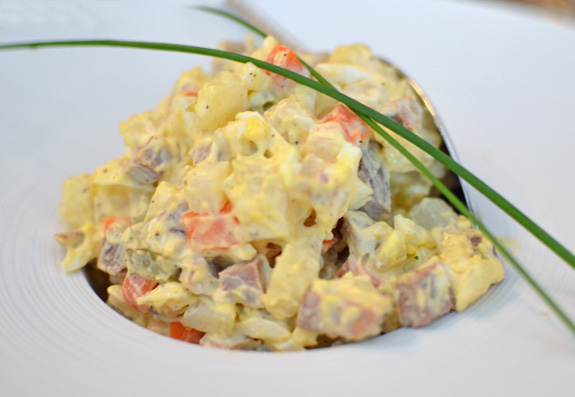 The ukha (“traditional fisherman’s soup”) was made up of chunks of salmon, potato, and carrot in an aromatic bouillon. There was nothing wrong with it, but it was a rather simple dish — one typically expects a little bit more variety in a fish soup. The wild mushroom strudel was nice, if not all that hard to make. The puff pastry certainly wasn’t house-made (very few restaurants make their own) and I think the mushrooms were cremini and shitake, which aren’t wild! This is a criticism that could be addressed to 99% of American restaurants, actually. Look it up in the dictionary, folks: wild means “existing without human habitation or cultivation”. Cremini, portobello, shitake, or maitake do not qualify! 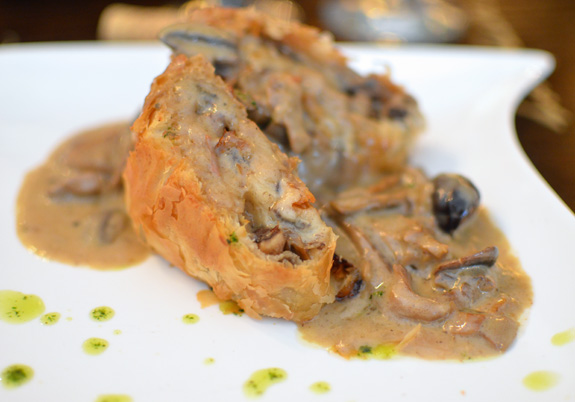 The veal pelmeni were good if nothing special. I’d say they were house made, because of their slightly irregular shapes. I also wish there had been more liquid in the pot. 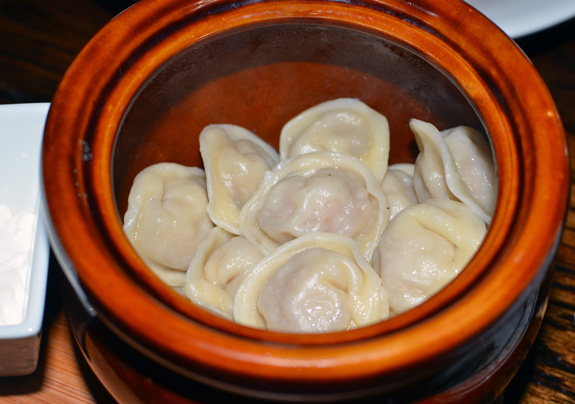 When we tried to order the meat vareniki, our waiter informed us they only made meat pelmeni and that they’re the same, which is somewhat true but doesn’t explain why nobody fixes the menu. We had the potato vareniki instead. They tasted a bit too much like black pepper, but the filling was nicer than the all-too-common watery potato mush. 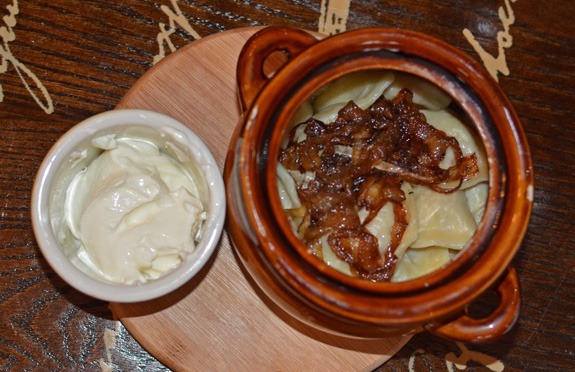 The beef Stroganoff managed to be cooked to well done without being tough, a rare feat. It was served with more mushrooms than one could possibly eat, some onions, and reduced cream that made the dish very rich. Here again, although the preparation was fine, the recipe was too simple to be exciting. And the kasha that accompanied the meat (it was supposed to be a side dish, but the kitchen mysteriously decided to substitute it for the mashed potatoes instead) was simply boiled. 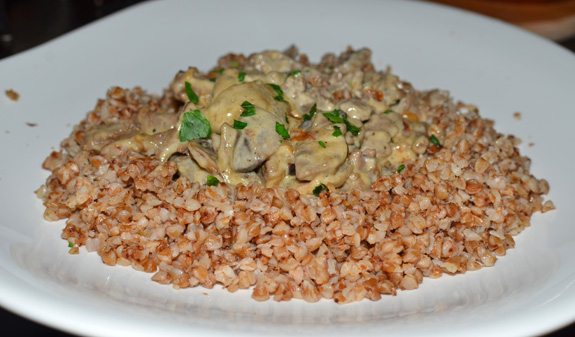 Moving on to the desserts, the home-made napoleon with Bavarian cream wasn’t a napoleon at all. Instead of the expected layers, bavarian cream was just sandwiched between two sheets of a kind of cold puff pastry (the one that’s store-bought, remember?). The result was very ordinary. 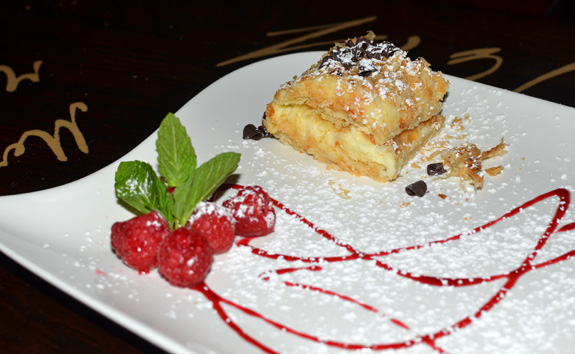 The syrniki, tvorog pancakes, were made to order. They tasted nice but were mostly an excuse to eat the good cherry preserves and honey (an industrial honey blended with high fructose corn syrup)! 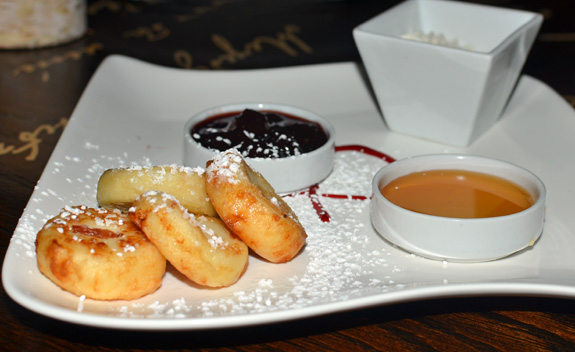 It is hard to rate Onegin’s food without taking into account the lackluster service, but I’ll try my best. Clearly, the food doesn’t match the expectations set by the rich decor. There’s nothing innovative about it, and I’m not sure what makes the owners believe this is Russian fusion (whatever that means). It would be more accurately described as traditional Russian food on elegant tableware. Note that most dishes were actually good, there just wasn’t anything outstanding, complex or really original.

The Best and Worst Restaurants of 2011