In a Red Alert almost three years ago, I featured the rather ephemeral M. Wells Diner. After closing over one of those New York lease arguments everybody talks about for a month before forgetting all about it and moving on to the next piece of food gossip, the owners opened M. Wells Dinette at PS1, and more recently, M. Wells Steakhouse, both in Long Island City.

Discussing the Steakhouse outlet, “Orange Alert” may be more appropriate, since most of the dishes I’m going to talk about are somewhat (very) loosely connected to Eastern Europe. 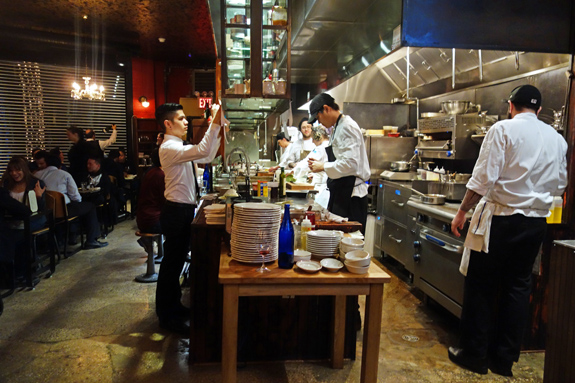 In an age where many fancy restaurants like to describe their dishes as an uninspiring enumeration of ingredients, the menu at M. Wells Steakhouse looks rather exciting, and you’ll probably find yourself asking the waitstaff a few questions: “What is beef butter? What is Captain Korea’s breakfast? And why is the meat pie called tourtière du lac (lake pie)?” Similarly, I think each of the house cocktails had at least one ingredient that I didn’t know — maybe I’m just getting old.

Let’s start our Alert with the caviar sandwich. Of course caviar’s not so Russian nowadays, and some time soon there might be more sturgeon in the Hudson than in the Caspian. The sandwich was pretty disappointing, with too much bread that tasted like plain toast, and too much lemon when there should have been none. Refusing to put lemon on your caviar isn’t snobbery, it’s common sense: lemon turns delicate sturgeon roe into little more than lumpfish roe. Besides the thin layer of paste-like pressed caviar, the sandwich was completed by a piece of what I believe was whipped butter, or so I’ve read on the internet (in my memory, it had no taste at all and felt vaguely greasy). 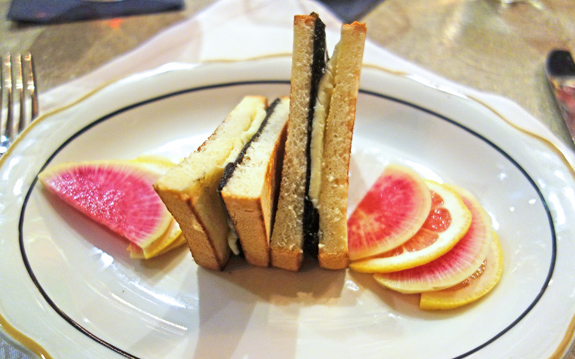 When I read the rave review in Saveur, I wondered if we ate the same dish. What I ate definitely resembled more Pete Well’s description in the New York Times. I was told that the caviar was ossetra ($150 / oz), but you could probably make the exact same dish with hackleback roe ($20 / oz), if not with avruga ($5 / oz). I also question the point of turning ossetra into pressed caviar, when pressed caviar is something that can be bought for half the price. But all pecuniary considerations aside, I think plain roe would have worked just as well, if not better — dripping caviar while you bite into a sandwich is quite my idea of excess. 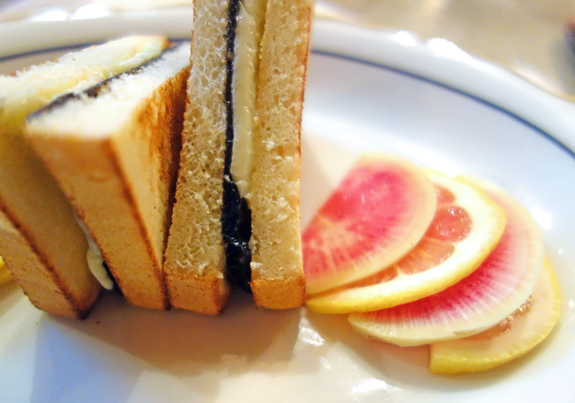 The infamous tourtière du lac isn’t specifically Eastern European either (it hails from the Saguenay-Lac-Saint-Jean area in Quebec), but it’s in line with many dishes that I like and blog about: it contains a lot of game meat. With the potatoes and the dough, I also wouldn’t consider it out of place on a Russian table. 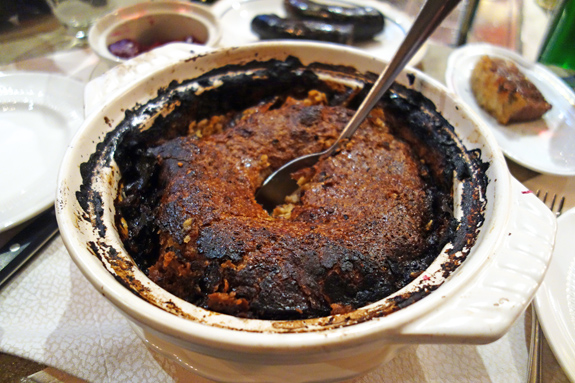 The pie tasted good; the meat was tender without being dry and the potatoes were soaked in the delicious reduced juices. Yet I’m a bit disappointed that this debauchery of game meat somewhat lacked distinctive character. 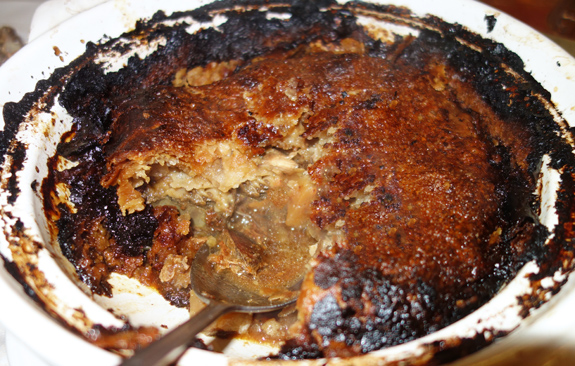 The menu has an interesting conception of side dishes, with several options consisting of meat products rather than vegetables. The blood sausage was excellent. The fat content was perfect, the blood was mixed with a bit of sweet rice and some vermicelli (an unusual filler that’s much lighter than cereal alternatives), plus a hint of spice (a kind of quatre épices, I’d say). If ordered with another side, the blood sausage would be big enough to be a meal of its own. This gives me some food for thought towards a future krovianka recipe. 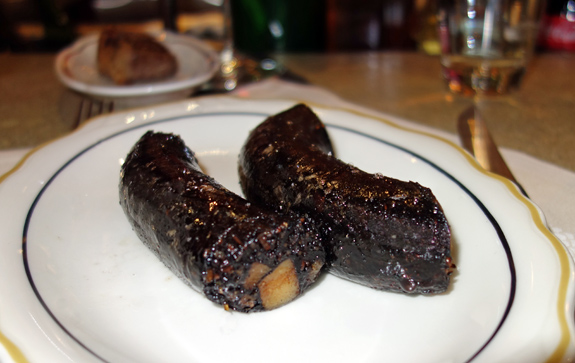 Pavlova isn’t a Russian dessert at all, but the fact that it was named for a Russian ballet dancer is justification enough in my book. Once again, the portion was large enough for two (too big for two, in fact). The meringue was a bit too sweet but the dish was very good overall and looked much more elegant than most pictures of Pavlovas I can find via Google Images. The egg white shell contained some delicious kind of banana pastry cream, and the passion fruit on top brought a well-needed acidic note to contrast with the sweetness. 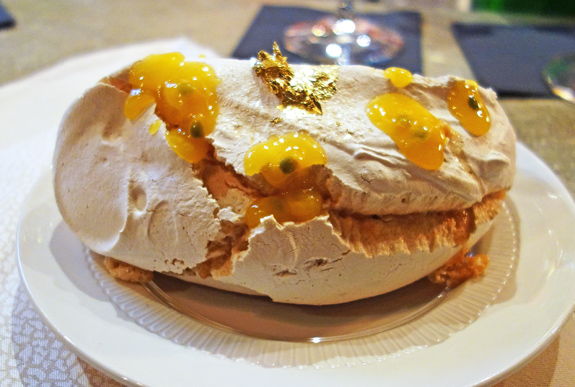 Everything we ate at M. Wells Steakhouse was rather good, but could have been better. Quantity, though certainly grabbing some attention, did not make up for this slight lack of quality. Too bad, because the meal had the potential to be memorable. At least I got some inspiration for my own recipes!