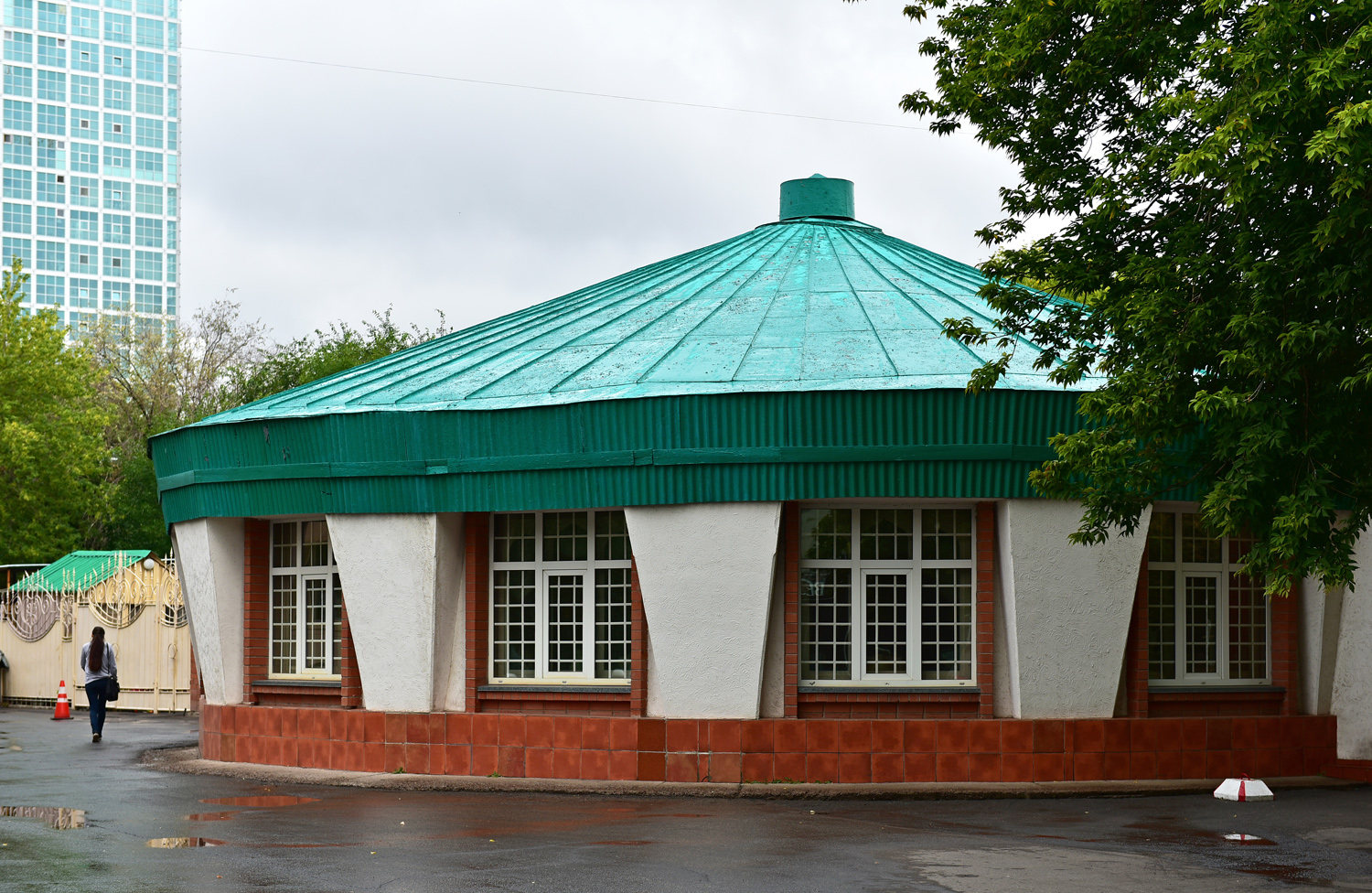 We’ll get back to Tajikistan soon enough, but as a follow-up to my previous post, I think it might be interesting to look at beshbarmak in its natural habitat just to compare what I’m making with the “real deal”. Some other bloggers have already documented the making of this dish of noodles, boiled meat, and onion at length, whether in Kazakhstan (here) or in Moscow (here). I’m going to focus on restaurants in Almaty and Astana, where I ordered the dish on several occasions and thus got to try my share of variations. Spoiler alert: it never gets wildly creative.

First let’s brush aside any stereotypes you might have acquired by watching Borat too many times, or just by (understandably) knowing very little about Central Asia. Even Lonely Planet still states that “traditionally, a host will honor an important guest by sacrificing a sheep for them”. And while that might be true in some rural areas, don’t expect to see lambs being slaughtered on every corner in the country’s main cities. In today’s Kazakhstan, you don’t typically need to make your own noodles to prepare beshbarmak either, just as you don’t need to go to the live animal market every time you want to eat lamb. You just shop at the supermarket. You pay using not a barter system, but a credit card with a chip and a PIN code — hear that, Americans?

Below, a package of beshbarmak noodles from the supermarket: 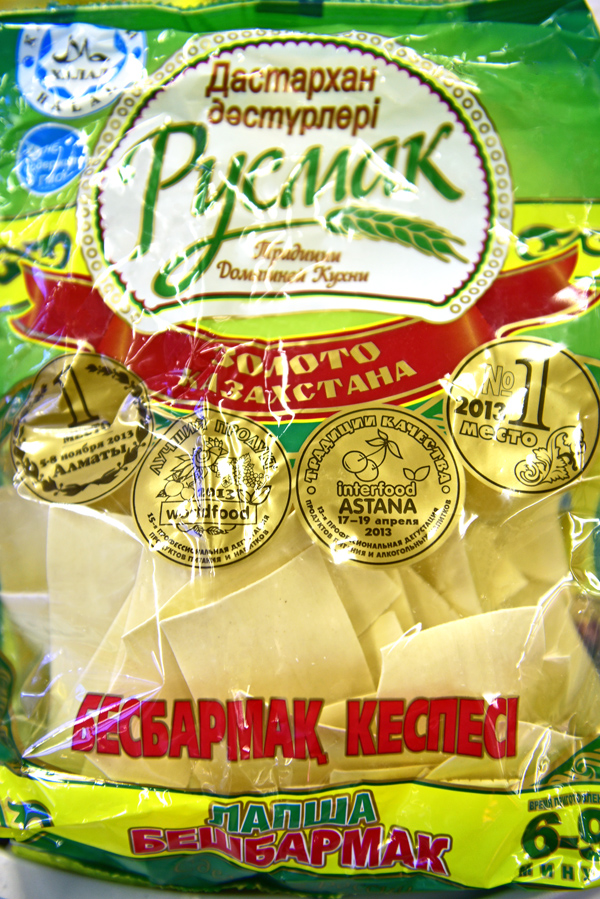 Maybe you’re thinking “Kazakhstan = nomadic people & yurts”. Sure, but the only time many locals (especially the 55% urbanites) spend in a yurt is when they go to a restaurant. Indeed, many Kazakh eateries opt for a hyper-traditional decor served with one or more spoonfuls of kitsch. Expect yurts of all sizes and colors, from the single-table wooden construction in the courtyard, to the large concrete rotunda hosting the whole dining room. In addition to Western-style tables, many places also offer tapchans, raised platforms covered by a carpet with a low table at the center, where you can switch back and forth between reclining and dining to your heart’s content. We’re going to see a lot of that in future travel posts and below, as I retrace my discovery of beshbarmak.

Restaurant Zheti Kazyna in Almaty is clearly playing the traditional decor card. Waiters wear traditional costumes. There are fountains, painted wooden moldings, musical instruments on the walls, comfortable tapchans, and an open kitchen with all the appliances known to the Central Asian cook. On one hand, you could say that the decor looks touristy. On the other hand, well, have you ever heard of anybody going to Kazakhstan for tourism? Besides me, that is, who, after a 24-hour journey, ignores the torrential rain that marks the end of a 3-month drought and heads straight to the restaurant to try beshbarmak, or besh for short. 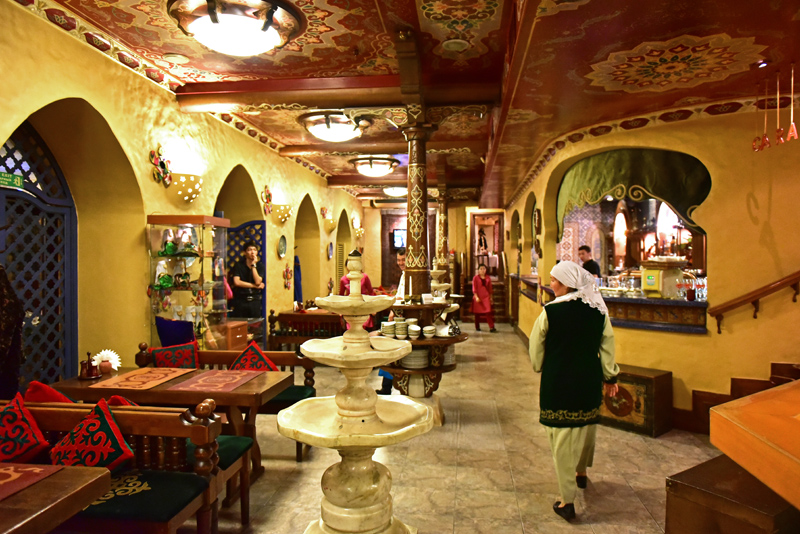 There are nearly 10 besh options to choose from at Zheti Kazyna, differing in size and in the nature of the protein (horse meat, lamb, veal, or fish). Many of them come with kazy (a kind of sausage with large chunks of horse meat and fat), and zhaya (the rump cut of the horse, boiled). My very first beshbarmak turns out to be one of the best. At the bottom of the plate, the very thin and ribbons of pasta are bathing in a puddle of bouillon. The boiled meats (lamb + horse, veal + horse) are all very tender. Very thinly sliced raw onions and chopped chives top the plate. The same clear bouillon, called surpa, is served in a bowl on the side. Meaty and salty, typically made with horse meat, it tastes very good. The whole dish is good overall, if a bit rustic. Between the noodles, meat, and bouillon, beshbarmak is a whole meal, and a pretty filling one at that, so refrain from ordering a dozen side dishes to go with it. 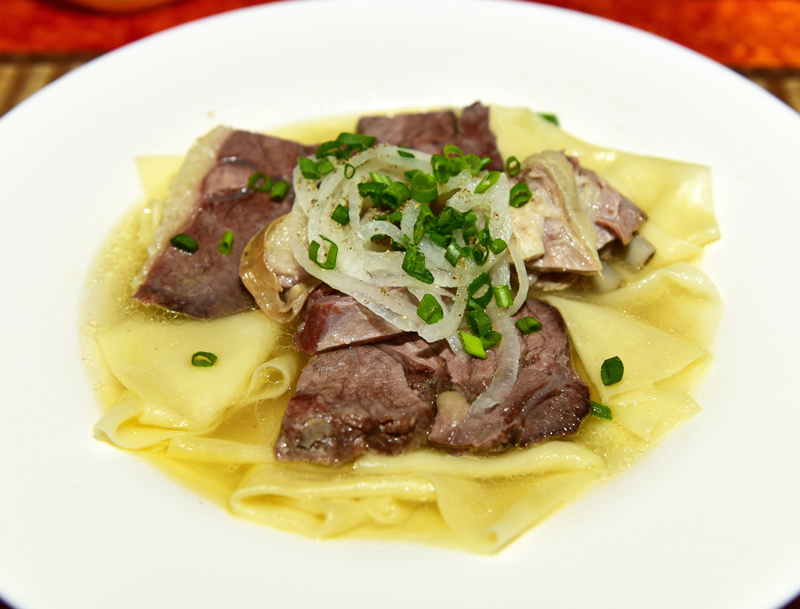 Almaty is situated only a few kilometers away from the Tian Shan mountain range, and city dwellers enjoy visiting the nearby Medeu skating rink and Shymbulak resorts in all seasons (summer and winter, at least). Samal Resort & Spa is a luxury hotel located in the foothills near Medeu, “just 15 minutes from the busy streets of Almaty” and “surrounded by magnificent mountain scenery”. It’s not quite the remote mountain retreat one could hope for (it’s located on the main road), but it still offers a comfortable stay. I’m a bit perplexed by the Arabian theme. Did I take the wrong plane and land in Dubai? Is this some kind of cultural authoritarian brotherhood? Still, after the invigorating fresh air of Tian Shan and the soothing jets of the Jacuzzi, I have high hopes for the besh. 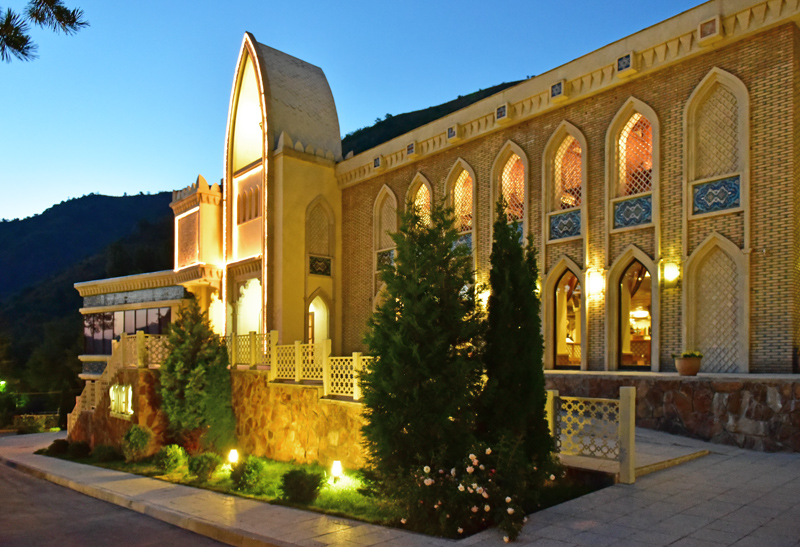 Sadly, hotel restaurant Al Wadi is either overrated or experiencing a recent sharp decline, at least when it comes to the local dishes. The beshbarmak is a letdown, and it clearly looks like the kitchen doesn’t try very hard. The pasta is slightly overcooked. The meat is just OK, and consists of kazy only; after the meat variety at Zheti Kazyna, that’s really disappointing. Everything is topped with a pile of cooked onion and negligently chopped scallions. There’s no bouillon at all. Definitely not as good as the first one. 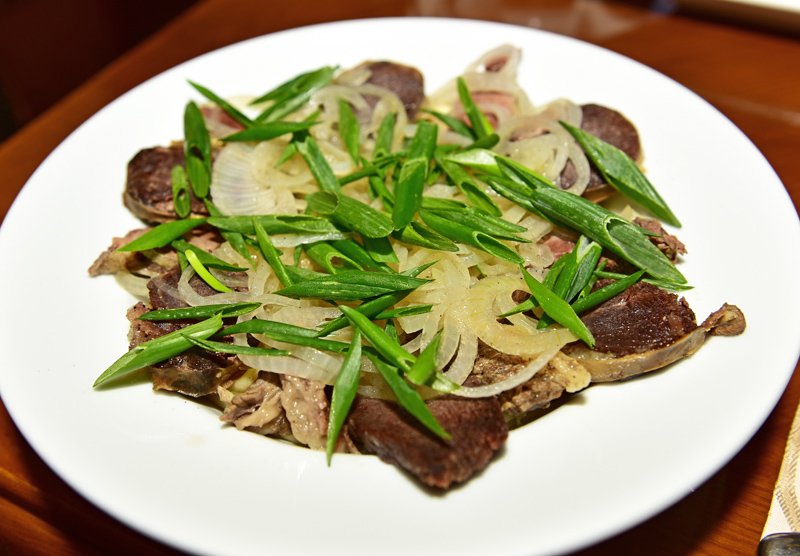 So besh #2 gave me pause, but after taking a break from the national dish for a few days, I’m ready to give it another chance. Surely the capital city, where everything is bigger, newer, and shinier, will restore the tarnished crest of the nomadic meal. I’m counting on restaurant Kishlak, situated in the heart of Astana’s New City, near the famous Khan Shatyr Entertainment Center. 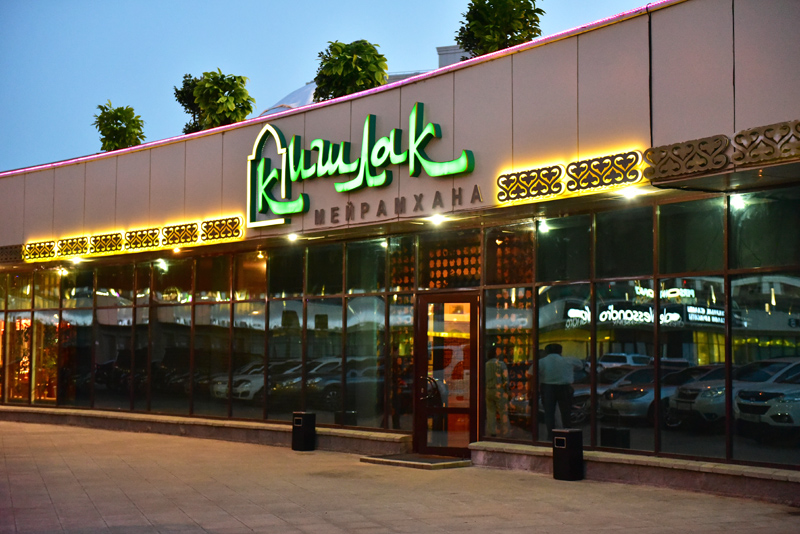 Kishlak’s extensive menu only lists one beshbarmak, made with lamb, kazy, and zhaya, and served with a bowl bouillon — which is more than enough if it’s well prepared. For the first time, my besh also comes with a boiled potato, and dill sprinkled on top of the cooked onion. I definitely like the lamb better than the horse meat, partly because of the funky preparations that Kazakhs tend to inflict upon the latter: horse meat is typically cured and dried in the sun before being boiled, and as a result it can taste strong and/or dry out. Still, this is a good beshbarmak for what it is. 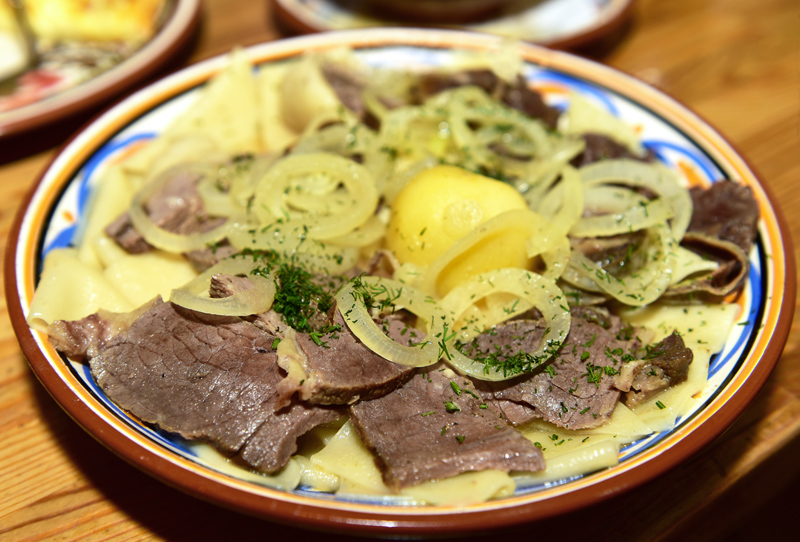 Still in Astana but in the Old City now, restaurant Farhi is a large concrete yurt that’s somewhat elegantly decorated inside, apart from the pompous and totally outdated cloth chair-covers. The Bradt Travel Guide promises “one of the best venues in Astana for Kazakh & other Central Asian cuisine”, with the besh “a good traditional choice here”, and some extras “to show real Kazakh hospitality”. This will prove in a sense the acme of my culinary discovery. 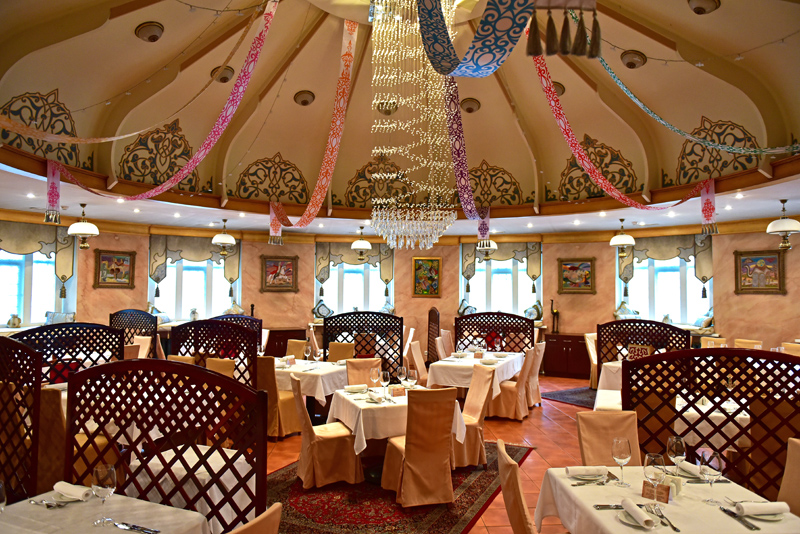 Beshbarmak, which on Farhi’s Kazakh-language menu is simply called kazaksha, is declined in three versions: just beshbarmak but the most expensive I’ve seen so far (50% to 100% more than anyplace else), Farhi beshbarmak with rice (instead of the noodles), and a festive toy-beshbarmak. This last one is no kid stuff; it’s a whopping $650 for 10 people and includes every horse delicacy known to Kazakh human: the usual kazy (a smoked sausage with large chunks of fat and lean meat that looks like this) and zhaya (the rump cut), plus zhambas (the round cut), zhilik (another cut, though it seems to have several meanings), omyrtka (the breast cut), and shuzhyk (a smoked sausage that looks like this; call it the Kazakh version of sujuk). I hope I got all those cuts of horse meat right!

I opt for the Farhi beshbarmak, and it’s the best besh I’ve had in all my time in Kazakhstan. It’s made with three kinds of horse meat: kazy which is particularly good because it’s salty but not too strong, and two cuts that may or may not be the rump and the breast, both well seasoned and tender. One of them has a generous layer of fat. I don’t know if it’s the restaurant’s invention or a regional variation, but I kind of prefer the rice to the usual noodles, partly because it absorbs the bouillon and becomes that much more flavorful. There are also potatoes and cooked onions, and we get a bowl of horse bouillon with a little ramekin of kurt (which has to be ordered separately from the besh). If the bouillon is already good on its own, the kurt adds some welcome tanginess. A great dish all together. 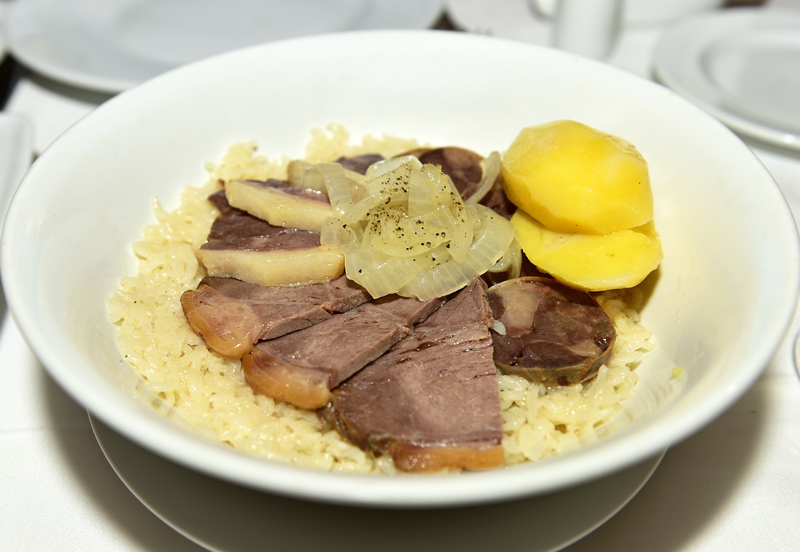 But that’s not all! The beshbarmak at Farhi can come with the ultimate in bells and whistles: a whole lamb’s head. I say can, because mind you it requires quite a bit of foresight. For a start, the head must be ordered at least a day in advance. Then you need to stop by the restaurant (also ahead of time) to leave a deposit. And this is the most expensive lamb’s head that you’ll ever encounter — $50 at the time of my visit. The result is… surprising. The head is simply boiled and then served cold (I was told it’s always served like this), “decorated” with slices of cooked onion. If I remember correctly, the brain is served separately but with the same lack of embellishment. Seriously? That’s it? I feel overwhelmed with adjectives: plain, odd, disappointing, overpriced. And why cold? 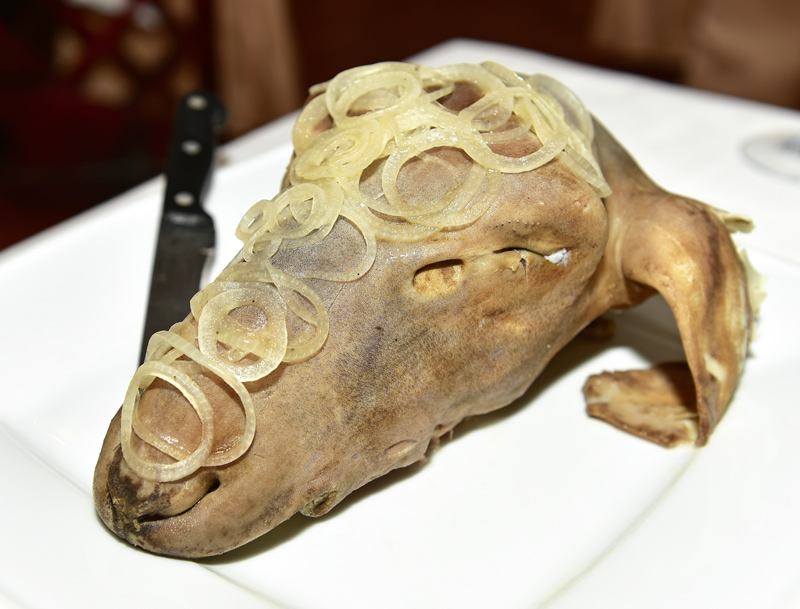 I’m sure there are many more beshbarmaks to try, whether in Kazakhstan, Kyrgyzstan, or Bashkortostan (yes, that’s a real place). Next time, maybe I’ll even eat one in a real yurt!