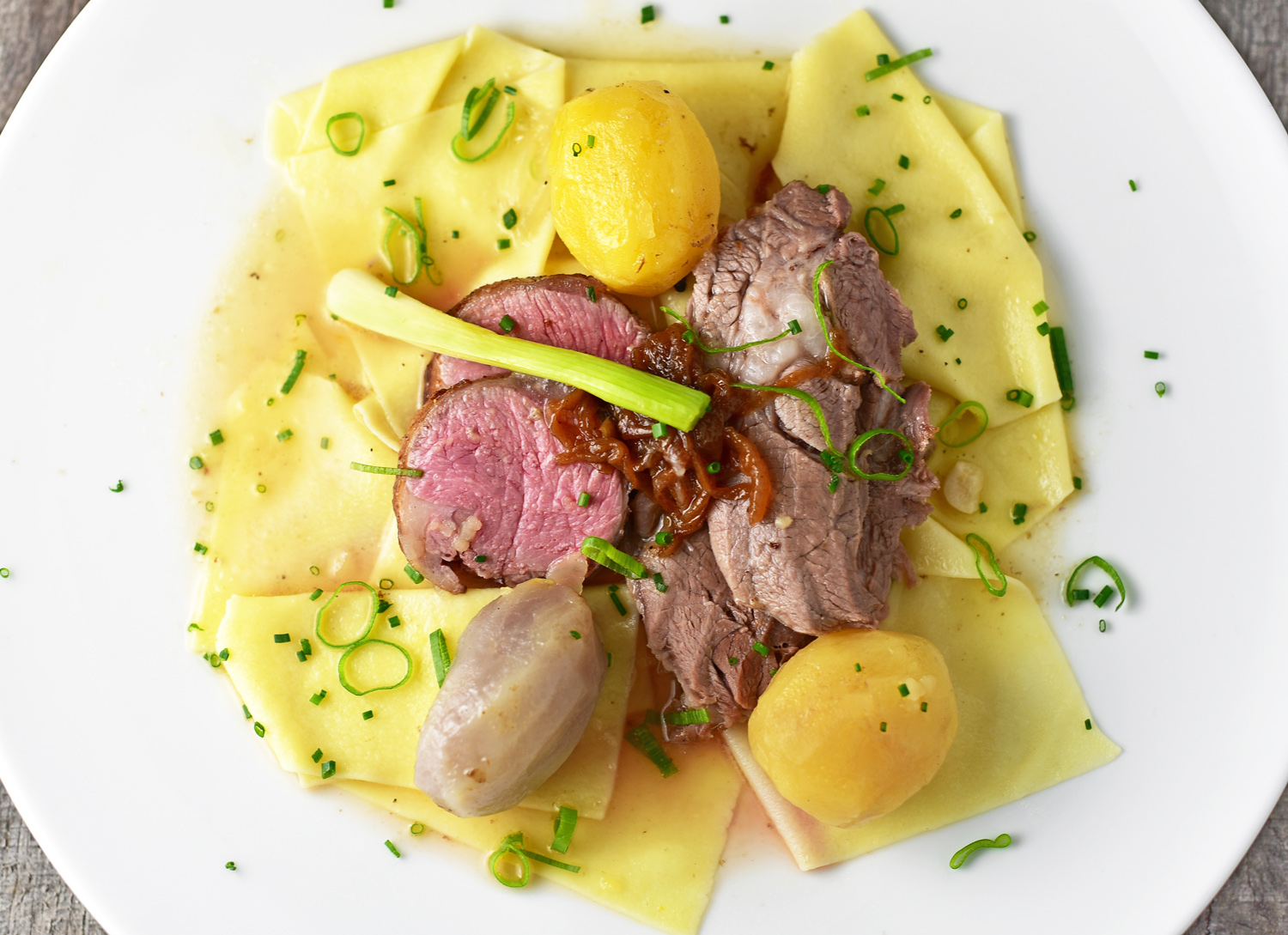 Kazakh cuisine borrows heavily from its neighbors, and doesn’t count many dishes it can genuinely call its own. This isn’t much of a surprise when you consider that one third of the land is occupied by the world’s largest dry steppe region, and the country has historically been inhabited by nomadic tribes. Beshbarmak is the most popular dish (another contender would be kuyrdak), though even it is shared with Kyrgyzstan, instead of being specifically Kazakh. The term beshbarmak means “five fingers” because the dish is traditionally eaten with one’s hands. However, I must say that I’ve never seen anybody eat it that way in the highly civilized restaurants of Almaty and Astana, and doing so must be terribly messy.

First things first, so what’s beshbarmak anyway? In essence, it’s boiled meat served atop large pieces of pasta. The meat can be one or more cuts of horse and/or lamb, though I’ve also seen veal and even fish in some Almaty restaurants. The pasta is usually cut into flat squares; I’ve seen a version in Astana where it was replaced with rice, though I can’t tell you if that was a regional variation or the restaurant’s invention. There will usually be some onion as well, possibly other vegetables from the Allium genus, like scallions, and sometimes boiled potatoes. On the side, you can expect a small bowl of meat broth, into which you can stir a spoonful of kurt (drained yogurt, see my qurutob recipe).

The larger the party, the more festive the cuts of meat — provided you consider a lamb’s head festive. Apparently, serving beshbarmak for a major event comes with a whole ritual that will bring solace to anti-progressive defenders of tradition and other worshipers of grandmothers’ recipes, as it is reminiscent of a more patriarchal time when people knew their place: elders first, then adult men (“the most respected guests”), then women (with special treatment on their wedding day), then children (with special encouragement for girls to work hard). Because, yes, the next time you flip nostalgically through a faded notebook filled with handwritten recipes, you should remember that this is what tradition is really about. From wikipedia:

Sheep’s head boiled in a kazan is put before the most honored guest, usually the eldest one. This person cuts the bits and parts from the head and offers them to the other guests at the table. The younger adults often receive the bones of the legs and shoulders. Boys are given the sheep’s ear with wishes to be careful; girls get the palate so as to be diligent. The other parts of the carcass are equally meaningful. The most respected guests are treated to gammon and shank. A young bride receives the brisket; however, married women are given the neck bones. Children are given the kidneys and heart, which are supposed to help them mature but not sheep’s brain, because it is believed to make them weak-willed. Knuckle is never served to a young girl, because of the belief that it will cause her to remain an old maid.

That being said, outside of Central Asia, you might very well need to get yourself invited to your friend John Doe’s Kazakh family dinner just to try beshbarmak if you don’t like to cook. I’m not aware of a single restaurant in New York that serves it — if you know one, please email me. Even in Moscow, Kazakh restaurants are few and far between compared to the ubiquitous Uzbeks (here’s one).

If you do like to cook, you’re in luck: it’s not hard to make at home… assuming you don’t try to acquire horse meat, a complicated affair in the United States (and ultimately a wild goose chase at the time of this writing). My version is festive in its own right, as I take some extra steps to make the dish more elegant. I am using the two best cuts of lamb: the pressure-cooked leg and the roasted rack. Then there are the caramelized onions, the scallions à l’étuvée, and the filtered broth. Still, you could keep things simple: make the pasta or buy lasagna sheets, cook your meat and vegetables in the pressure cooker, serve.

As for the festive lamb’s head, expect a follow-up post soon!

Purists might beg to differ, but this looks better than any beshparmak I’ve ever had. The caramelized onions are a great touch!

Haha, thanks! Purists probably stopped reading my blog a long time ago.

We had this in an adobe hut when we stayed with Kazakhs in Bayan Olgi province, Western Mongolia. It was edible but not elegant & I don’t remember caramelized onions. We certainly ate with our 5 fingers.

I’m just back from Budapest where I found a Georgian restaurant, Hachapuri, along Andrassy Street (where we were staying).