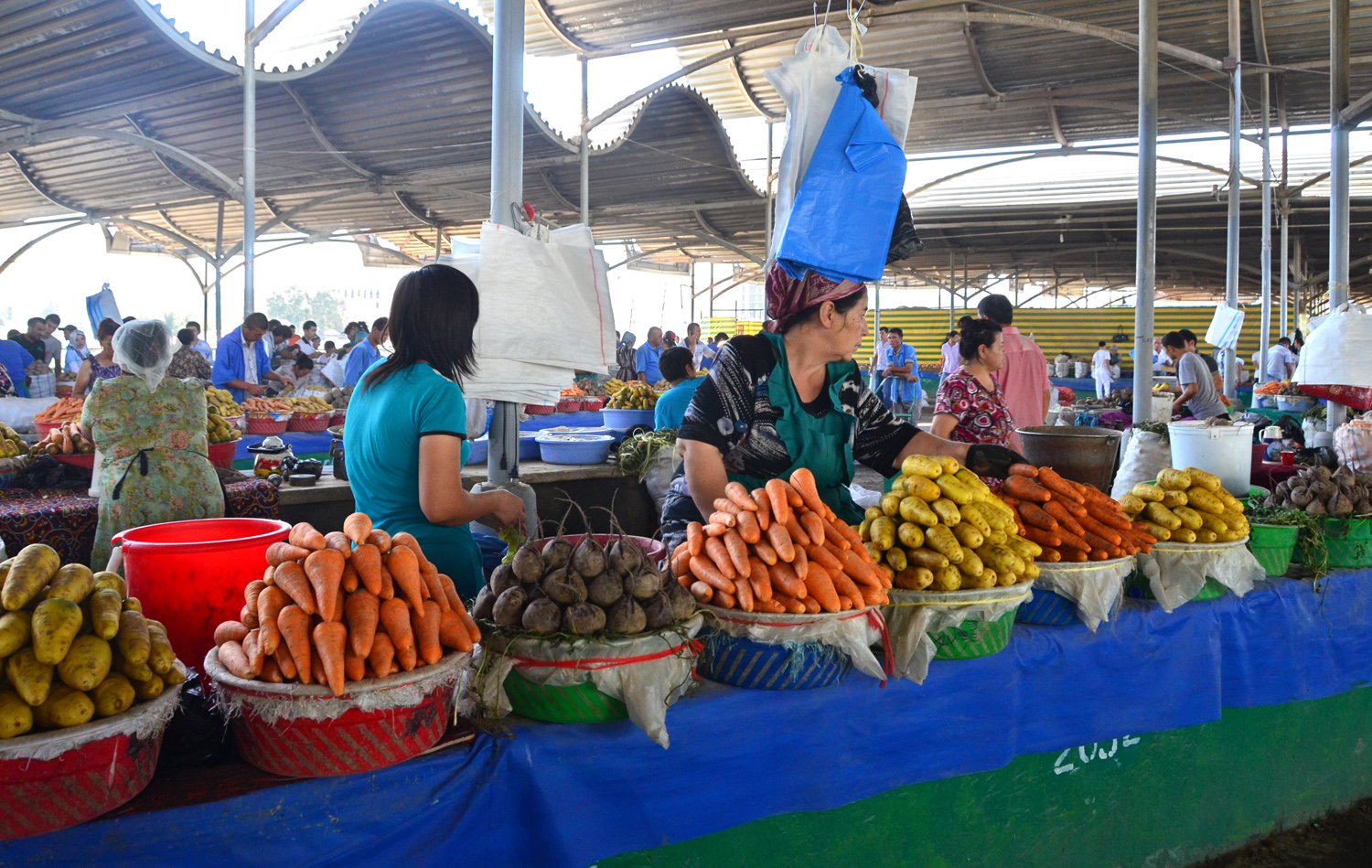 As I mentioned in my last post, Uzbekistan’s capital, Tashkent, doesn’t have the same touristic appeal as Samarkand or Bukhara. The 1966 earthquake caused massive destruction, and gave the USSR the opportunity to get rid of a good chunk of the old town, building in its stead a modern Soviet city with characteristic desolate avenues, occasional neoclassical architecture, and a plethora of huge concrete buildings. Since then, over the past couple decades, most Central Asian autocrats exhibited a taste for oversize monuments made of shiny metal and other kitchen-counter-worthy materials in order to create new national identities. As a result, in Tashkent you are far from the average tourist’s image of a major trade center on the Silk Road.

Nevertheless, Tashkent hosts one of the most impressive food markets I’ve seen in the whole of Central Asia. Chorsu Bazaar is located beside the remaining part of the old town, where artisans and craftsmen sell knives, musical instruments, and wooden furniture. Chorsu means “four streams” in Farsi, a reminder that it has served as a trading crossroads for centuries — current appearances notwithstanding — and probably in reference to the days when Tashkent was a confederation of four independent daha (cities) that had a common fortified wall with twelve gates, and the ancient bazaar in the center. Supposedly, a market has existed in this spot (the main square of an area called Eski-Juva, Old Tower) pretty much continuously since the Timurid dynasty in the 14th century, when the city recovered from the Mongols’ destruction and became a prominent center of scholarship and commerce along the Silk Road. People came not only to buy, trade, and sell, but also to hear the news and be entertained by singers, clowns, rope walkers, or cock fights.

New constructions replaced older ones over time, but a few building principles remained. In particular, large domes were used as a way to protect people (and food) from the heat and dust that the Central Asian climate brings. Today’s main edifice, built after the ’66 earthquake, is inspired by this architectural style but with an undeniably Soviet touch, particularly on the inside. The powers-that-were must have felt that the Greatest Country on Earth had to outdo anything that the Silk Road had ever seen before. Concretely, this meant a giant turquoise dome of almost 100 meters of diameter, 30 meters of height, which quickly became a Tashkent landmark, made Chorsu Uzkekistan’s most important market, and still dwarfs anything you’ll see in Samarkand or Bukhara.

The central structure hosts food stalls on two levels, plus a basement for utility rooms. But there’s a lot more to Chorsu Bazaar: surrounding smaller blue domes and pavilions sheltering outdoor food stalls occupy even more space than the main dome. Looking at a map now, I realize that I’ve probably seen only a fraction of the whole market. In the same location, there’s also a bread market, many outdoor cafés, a flower market, a “thing” market (the Russian term for a market selling anything other than food and flowers, essentially), and a shopping mall. The crowded lanes between vendors’ stalls just make it very difficult to orient oneself.

Chorsu was the first market I visited in Central Asia, and it left a lasting impression because of its atmosphere, its architecture, and its sheer size. I still remember arriving there on the first day of my trip, red-eyed after a twenty-plus hour journey from New York with a delayed connection in Kiev. The burning summer heat, the bags full of monkey money, and the colorful ingredients like a crash course on Uzbek cuisine… Looking at some more recent pictures, I see there have been a few changes since my visit over five years ago: the interior of the main dome has been painted white, which makes it much brighter, and refrigerated counters have become widespread. But the products, I’m sure, haven’t changed much!

While there is an entire hall hosting a bread market, there’s no need to go out of your way — a few vendors sell more of the same right next to some of the many entrances. The fact that so many vendors are selling bread when the variety is actually very limited probably just goes to show the importance of the non at the Uzbek table. The obi-non is made with just flour, water, yeast, and salt, boasts a very airy crumb, and is eaten fresh (ideally warm from the oven) with nearly every meal. The patyr, made with flour, milk, lamb fat, yeast, and salt, is denser and drier, and can be kept for a longer time. These breads can be decorated with various patterns using a chakich (a wooden stamp into which nails have been struck in the desired pattern), and perhaps topped with sesames seeds, but that’s about it.

Next, you’ll probably come across the pavilions selling fresh produce. There are peppers both sweet and hot, eggplants, beets, potatoes, cauliflowers, cabbages, onions, garlic, herbs, and much more, as you’d expect from any market. But Chorsu distinguishes itself by the pride of place that it gives to carrots. Of course, carrots — orange and yellow, neatly stacked on the stalls almost as far as the eye can see — play a major role in plov. In fact, a good part of the smell that people associate with plov comes from the carrots. Stalik Khankishiev, who wrote an entire book dedicated to plov (which is called… Plov) has some insight about the local production. Because Uzbekistan gets less water than most vegetable-growing countries, the traditional Uzbek carrot takes longer to grow, and this extended time results in a sturdier, harder vegetable. These characteristics are essential to make plov, as the carrots will be sautéed and boiled for a long time — young, soft ones would just turn to mush. All this to explain why the carrots you see at the market look so beefy.

For reasons unknown, on a sunny day of the summer of 2011, the mayor of Tashkent decided to ban the sale of watermelons and melons from all the city’s bazaars. In a sense, this isn’t any more random than the former president banning billiards from the entire country in 2002. Pumpkins are okay, though, so I’ll let you admire the beautiful dark green and bright orange of the local squash.

Let’s get inside the central dome, a masterpiece of Soviet Orientalism. For more pictures (slightly more recent than mine), check Suitcase & World‘s excellent post here. In addition to the new white interior and reshuffled food stalls, you’ll see plenty of photos of the bread market that I missed.

To stay on the plov theme, rice is abundantly represented, but in varieties with which the Westerner may not be familiar. Lazer is grown in Khwarezm, and is the rice of choice for Tashkent plov. It’s quite long (though slightly less so than Basmati) and has about the same liquid absorption characteristics as Arborio (according to our friend Khankishiev, at least). Alanga is a widespread and inexpensive Uzbek rice, often used for cooking everyday plov, and Avangard seems to be a similar variety. From what I can tell, these two are like the typical nondescript white rice one finds in the US and the world over. Although Kyrgyzstan is probably closer than Khwarezm, I don’t remember seeing any of the Kyrgyz varieties such as Dev-Zira or Chungara rice.

Rice isn’t the only pantry staple you encounter in Uzbek cuisine. There are also chickpeas (found in plov, again), and mung beans. The latter, called mosh, are used in mashkhurda, a hearty meat and vegetable soup.

I have heard some people wax lyrical about acres of spices arranged in brightly colored mountains at Chorsu. While there’s always a chance I missed most of them, I wouldn’t refer to the spice stalls in those terms. Uzbekistan isn’t India; its dishes revolve around a few select seasonings: various red peppers, zira (wild cumin), coriander, turmeric, barberries… and not much else.

While I suspect there’s an entire dairy hall hidden somewhere, there’s at least one product that doesn’t require refrigeration: qurut (or kurt). Those little balls are usually made of drained or boiled-down yogurt (especially qatiq) that’s given the desired shape and left to dry out. They come in different shapes and flavors, and I’ve seen someone describe them as Central Asia’s potato chips. Sure, why not? Though I’d still rather mix them into my soup.

Hosted in a separate hall, the meat section is not to be missed. Meat in Uzbekistan first and foremost means lamb, with beef and chicken coming far behind. Just look below: lamb, lamb, lamb, whole carcasses, primal cuts, smaller cuts… In a country that makes perfectly good knives, I’m a bit puzzled to see a butcher using an ax rather than a cleaver — maybe the ax is a more multi-purpose tool? I suppose I’d be even more puzzled to see someone chopping wood with a meat cleaver.

Typical Central Asian recipes call for the meat of mature animals, favoring flavor over tenderness. In fact, when it comes to lamb, in what I think is a good characterization of Uzbek cuisine, Khankishiev divides the cuts into three categories: 1) the most tender cuts (reserved for kebabs); 2) the cuts that require some extra cooking to become tender (perfect for plov: legs, shanks, ribs); and 3) the cuts that provide great flavor more than pleasing texture (the soup meat). But this classification doesn’t include the infamous kurdyuk — the fat accumulated in baggy deposits in the hind parts of a sheep, especially if it’s a fat-tailed breed. Many butchers proudly expose the fat behinds of their lambs, and I can easily imagine these delicious cubes of animal fat fitting into any of the three categories: alternated with lean cuts on a skewer, mixed into a plov, or enriching a broth.

Tashkent also sells quite a lot of horse meat, because of its proximity to horse-loving Kyrgyzstan and Kazakhstan. Sliced kazy (a sausage of dried horse meat and fat, in very large strips) can be added to Tashkent plov, and Uzbek naryn is a dish consisting of julienned boiled horse meat and fresh pasta, served hot or cold. The stalls can’t rival what you see at Almaty’s market, but horse meat is definitely a part of northeastern Uzbekistan’s cuisine.

In the same building, an entire floor is dedicated to fat, and that’s in addition to those fatty tails I already mentioned. Here, you’ll find merchants that sell nothing but pure animal fat: fat that you can render yourself, fat that’s already rendered, lamb fat, chicken fat, and probably other fats that I didn’t identify. This is quite a unique sight, explained by the propensity to use animal fat every time meat is being sautéed in a kazan, the Central Asian cooking pot. Splurging on animal fat comes with a cost, though. Average life expectancy in Uzbekistan? 69 years. Main cause of death? Coronary heart disease.