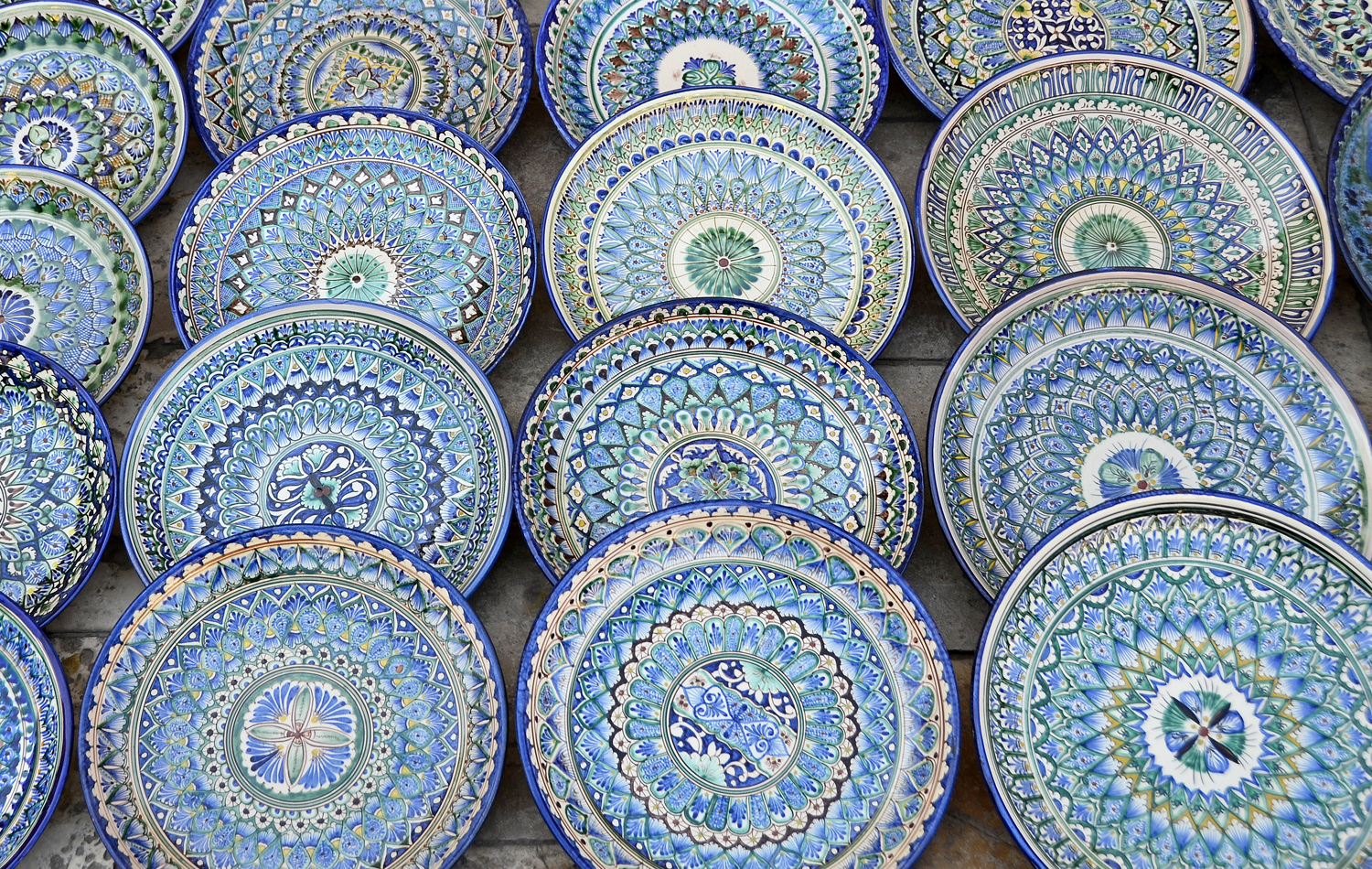 Returning to Uzbekistan after a sojourn in Tajikistan feels a little bit like reaching the promised land after crossing the desert. A Tajik desert with decrepit Soviet relics, hellish hotels, hellish roads, hellish tunnels, and teapots half-filled with adulterated booze, where the only direction locals can point you is to your very own nadir.

If you opt to drive from Dushanbe to Bukhara, you will cross a second desert, this one real, not metaphorical: the Kyzylkum Desert, whose name means “red sand.” You may not realize at first that you are in a desert — the first hundred kilometers, passing a huge aluminium factory and the town of Tursunzoda, are still pretty green. This is because the road follows a valley of cultivated land in the foothills of the Gissar Range, a valley noted for its production of cotton, vegetables, grapefruit, and rice. But once you’re on the Uzbek side, the district of Denau marks the last outpost of substantial population before the desert begins in earnest. That makes it a perfect spot to stop and recover from the rigmarole of your border crossing (guessing the correct way to fill out customs forms in Uzbek lest you’re forced to start over for the third time; waiting patiently after the officers decide that opening all of your party’s suitcases and searching them by hand would be a good way to pass time; negotiating with livery drivers who know you don’t have too many options out in the middle of nowhere…) 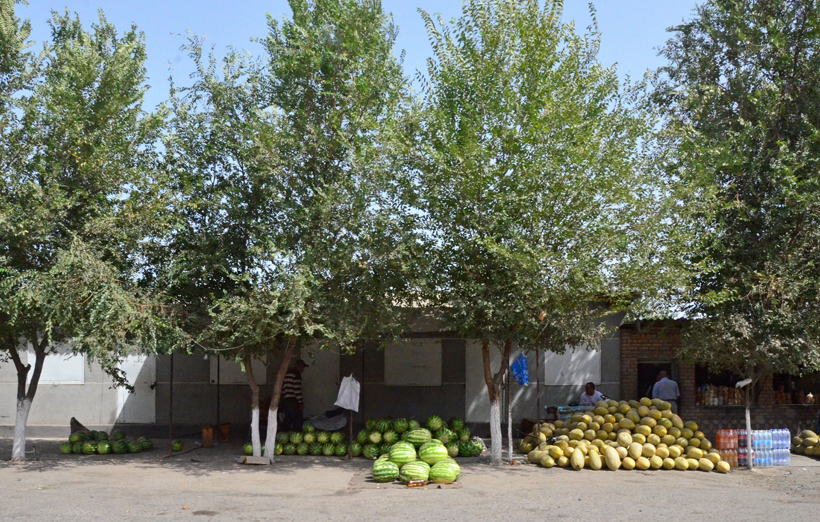 By now it’s lunch time, and we stop at a small chaikhana on the main road, where the cook bakes fresh non flatbreads and samsas in a tandoor oven. The samsas are filled with small chunks of meat and sliced onion, steamed in the crunchy hard shell formed by the crust, quite different from the layered pastry versions I’ve seen elsewhere. 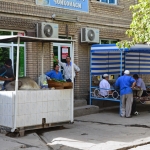 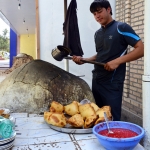 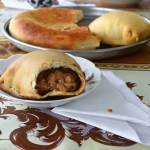 After Denau, we have to leave the irrigated valley and cut straight across the foothills of the Gissar Range to head West, surrounded by the arid landscape at its most photogenic, with only minimal settlements in sight every once in a while. The problem with pretty landscapes in this part of the world is that generally, after an hour of ooohs and aaahs, you still have a very long way to go in a very uncomfortable vehicle, with very few changes in the scenery. The drive from Denau to Bukhara takes something like 7 hours, if memory serves. 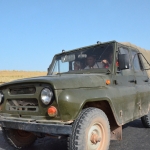 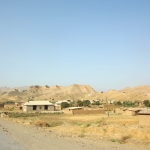 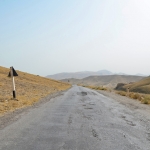 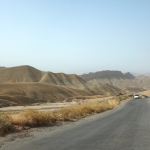 This means we arrive around dinner time, which should be perfect for a food blogger. Yet, perhaps because we’re still recovering from our Tajik adventures, or maybe because Bukhara is better known for its architecture than its cuisine, the food in the city calls to mind few memories. Our one-day visit is spent walking around, visiting the many architectural monuments, and buying souvenirs. Whether you want to purchase a traditional carpet or some beautifully painted ceramic plates, no place can rival Bukhara’s breadth of options. 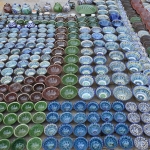 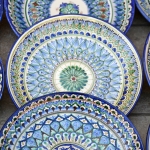 As far as I can tell, the eateries we visit — mostly of the touristy variety since the entire Old Town is akin to a museum — serve the usual Uzbek stuff, not bad but unremarkable. I do have pictures from one restaurant, and even then they’re more for the panorama than the food: Chasmai Mirob offers unbeatable views on the Po-i-Kalyan complex. On the menu? Non, plov, and a salad of tomatoes, cucumbers, onions, and greens. 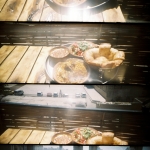 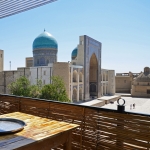 There are probably places in Bukhara with more gastronomic appeal, but the visitor would have to take the time to travel out of the historic center and into the New Town area. For example, the Kolkhoz Bazaar, just outside the city walls, is the largest food market, with the usual displays of produce, dried fruits and nuts. But it’ll have to wait, as we have a train to catch. Tonight, we’ll be sleeping in Samarkand. 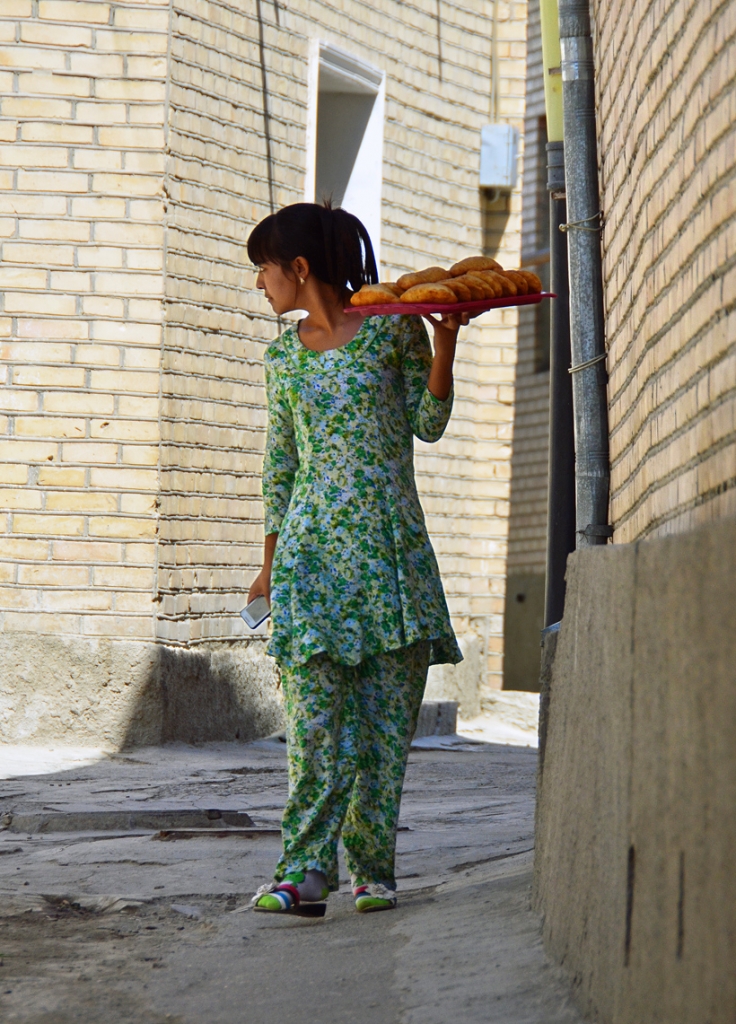