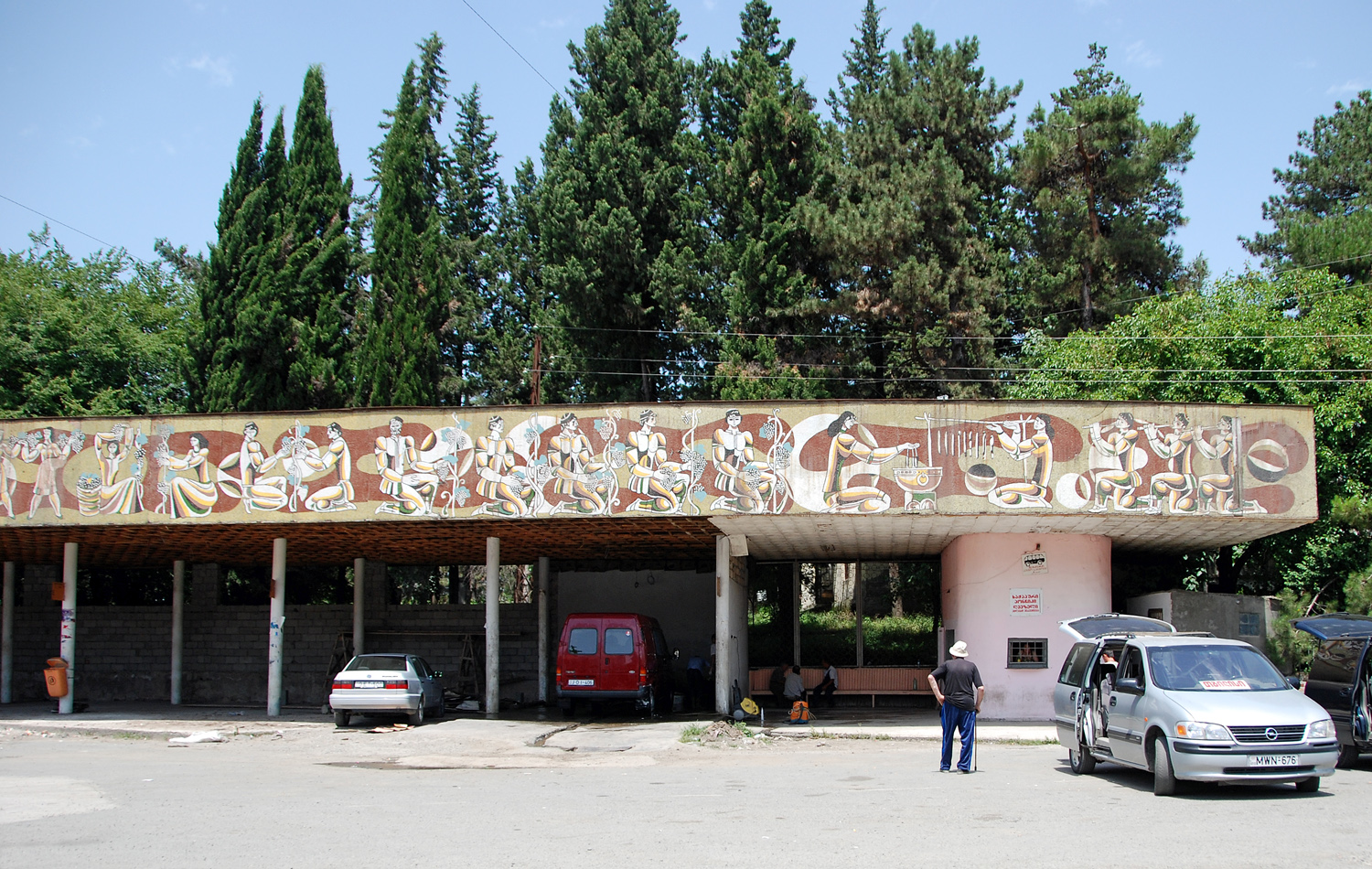 Over the past few summers, I have traveled throughout the Caucasus, from the capital cities to the most remote mountain villages. I will share with you some of those adventures.

Let’s start this series about Georgia with an unlikely theme: food representation in the public Soviet art of the Kakheti region. Located in the Eastern part of the country, Kakheti is the main wine region of Georgia. Georgians, we are told, like to drink, eat, sing, play music, and dance. Many mosaics and reliefs like this one, located at the entrance of the town of Sighnaghi, illustrate that:

On the road from Telavi to Sighnaghi, a monumental mosaic stands on the roof of something that might have been a bus terminal at some point, had there been buses and passengers. The many scenes of chanting and dancing are mixed with panels representing men and women preparing food. On one panel, men are harvesting grapes that will be crushed to make wine. Next to them, the grape juice is used instead to make churchkhela, a kind of walnut roll (see the recipe below). Another scene depicts wild boar hunting. The Caucasus provides favorable living conditions for a variety of game species, including boar, chamois, aurochs, pheasant, partridge, and grouse.

Here is another relief on the main square of picturesque Sighnaghi, April 9th Park (April 9th commemorates Georgia’s independence from USSR in 1991). More of the same: grapes, churchkhela and wine amphorae. Up to this day, traditional wine is made in large terracotta amphorae buried in the ground, called qvevri.

I haven’t tried this myself, but if you would like to try making churchkhelas, here is a traditional recipe that I translated from this site. Just be careful — the proportions are enough to start your own roadside churchkhela business!

[…] neighbors, Armenia is a paradise of nuts and dried fruits. You may recognize the churchkhela (mental floss here). The dark sheets hanging next to them are fruit lavash, made from plums or other seasonal […]

[…] Caucasus (and everywhere else, really), the locals are pictured living a simple life. In Georgia, people indulged in music, wine, and food. In Azerbaijan, proud men in traditional costumes ride their horses and and hunt game with recurve […]