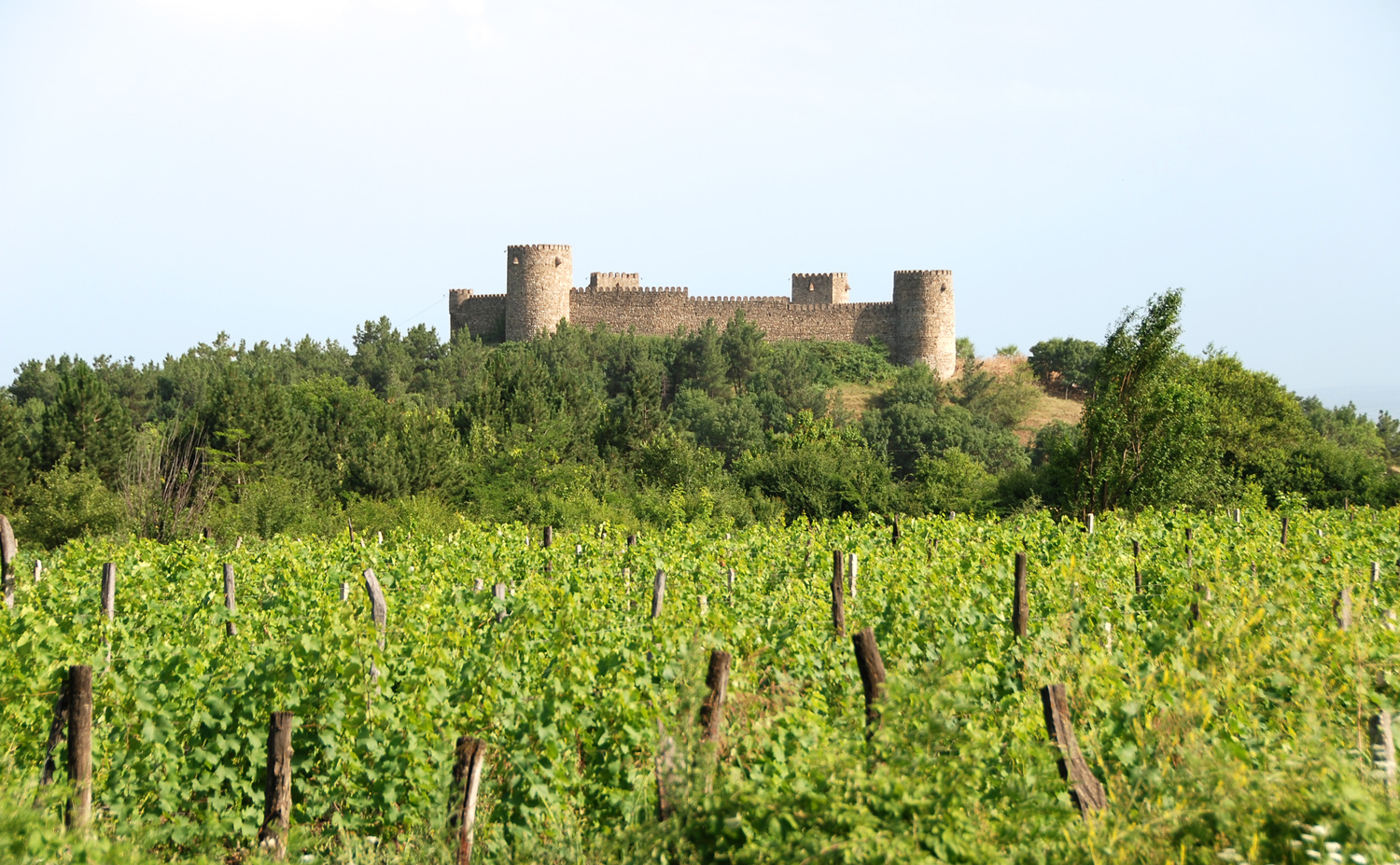 It recently dawned on me that I somehow managed to write an entire series of posts about Georgia, and barely talk about Georgian wine, except for a quick bit about Racha. The omission wasn’t intentional, mind you: as as early as the second post, I was promising to write about the wineries of Kakheti, Georgia’s most famous winemaking region. But that post never came, indefinitely postponed by my recognition that back then, I didn’t have all that much to say about the vineyards I saw and the bottles I drank. The topic could very well have remained forgotten, if it weren’t for a recent evening of Georgian natural wines in New York City.

Now, eight years after my visit to Kakheti, Georgia’s wine tourism is booming, and more and more small producers are making exciting traditional wines. Documentaries and books sing the praises of Georgian grapes and Georgian amphorae (the qvevri). You can buy Georgian wines all over the world, not just as a drunken dare in a Brighton Beach liquor store. So we here at Food Perestroika say let’s head back to Kakheti after all, and see if we can pour old wine into new bottles.

The birthplace of modern Georgian wine is generally traced back to the small village of Tsinandali, and the historic winery of the Chavchavadze family estate. Tsinandali acquired relative fame with its eponymous white wine, a blend of Rkatsiteli (typically 85% or more) and Mstvane varietals, and for being the home of Prince Alexander Chavchavadze.

Chavchavadze is one of the most influential characters in Georgian history: godson of Catherine the Great, poet, father of Georgian romanticism, polyglot, successively  a general in the Imperial Russian service and a Georgian rebel condemned to exile. He had a busy life. But he also had a winery back home. In fact, he was a pioneer of European winemaking techniques, helped give Kakheti its still-premier position in the Georgian wine world, and was the first to bottle his wine (instead of keeping it in qvevri).

These days, Chavchavadze’s estate has become a museum, but it still makes wine. The vineyard produces both traditional qvevri wines and “European” ones, as well as chacha (grape pomace brandy) and fruit brandies. Their production is hard to find outside of Georgia and I don’t have any tasting notes, but their wines include Tsinandali (the local blend of Rkatsiteli and Mtsvane), Saperavi, and qvevri Rkatsiteli.

With a long tradition of winemaking and a long list of local monasteries, it’s not surprising that Georgian monasteries in Kakheti also made (and sometimes still make) their own qvevri wines. The Nekresi Monastery, for example, is home to one of the oldest churches in the country (dating from the 4th century), as well as a later 9th century Bishop’s Palace equipped with a large wine cellar (marani in Georgian), where the holes in the ground mark the spots where the qvevri are buried. The grape juice and pomace would have been poured into the amphorae, then left to ferment. The wine would then have been drawn from the qvevri as needed until finished, at which point the pomace could be used to make chacha, and the qvevri would be washed to prepare for the next harvest. It’s not easy being a bishop in Kakheti.

Dating from the 11th century, the Alaverdi complex is the main spiritual center in Kakheti, and its cathedral remained the tallest church in Georgia for nearly a millennium. But, more important to us, they still make wine! The Alaverdi Monastery Cellar, run by the Alaverdi Monastery congregate, claims it’s been cultivating the Lord’s vineyards since 1011.

Alaverdi’s production includes Rkatsiteli, Rkatsiteli rosé, Mstvane, Kisi, Khikhvi, and Saperavi, and all their wines are made in qvevri. Each year, the monastery is also the locus of the late-September festivities of Alaverdoba, half religious celebration and half grape harvest.

I was unable to visit the inside of the Alaverdi complex during my trip, but their wines are occasionally exported and I have since been able to try the Rkatsiteli 2010, which is pretty hard to describe. The color is a rich, cloudy medium amber. The nose is slightly sweet, with honey and maybe peach and cooked strawberries. In the mouth, though, the wine is very dry, with an acidic finish and that very characteristic qvevri mouthfeel that results from the tannins. Walnut and sap (both very tannic) come to mind. It’s quite nice if you like that kind of wine.

At the other end of the spectrum but only a few kilometers away, the Teliani Valley winery is located in Telavi, the largest town in Kakheti. Established in 1997 on the site of a 19th century winery, the modern winemaking facilities produce over 2 million bottles a year — a huge number by Georgian standards. They also run a guest house at which I stayed during my visit eight years ago, which wasn’t that common at the time.

Teliani Valley grows both Georgian indigenous varietals and classic European varietals such as Cabernet Sauvignon, which they use to create their Teliani red. Their product list is longer than my arm, and I’ll let you read it on their website, but only the Georgian varietals are exported. Some of them fetch decent scores from Wine Spectator and Wine Enthusiast.

I recently tried the Tsolikouri 2015. The grapes don’t come from Kakheti, but from the Lechkhumi region in the Caucasus Mountains. The official description says “bright, crisp acidity, notes of green apple and pear, and a clean finish.” While I agree with the crisp acidity, the fruit notes are rather muted and the taste is fairly light. A perfectly good dry white wine, but I don’t think it’s worth going out of your way to try it.

Only a couple kilometers away, the Shalauri Wine Cellar is a newcomer, but I find their wines a lot more interesting. Their Saperavi 2014, for example, is made in qvevri, and offers a pleasant nose of blackberries and chocolate. It reminds me of some of the sweet Georgian reds (in a good way) but it’s a dry wine, and, surprisingly, it’s not overly tannic. Way to go! It even earned the favor of Wine Enthusiast, which gave it 90 points and overall agrees with my tasting notes (or is it I who agree with them?): “Inky garnet in the glass, this wine offers aromas of blackberry and aniseed. There is a nice interplay of tannins and fruit, with flavors of blackberry, chocolate, tobacco and a touch of violet. Because it is aged in clay jars and is unfiltered, there is a slightly chalky but not unpleasant feel in the mouth. The lasting finish offers subtle notes of saddle leather.”

Venture further east, deeper into Kakheti, and you’ll reach Sighnaghi, often called the prettiest town in Kakheti. This is one of the places where Georgia is the most reminiscent of Italy, possibly thanks to the somewhat heavy-handed restoration of the 18th and 19th century architecture (plus the wine, and the food). Note the qvevri in the town’s emblem.

Several wineries are based in Sighnaghi, and I’ve already mentioned Pheasant’s Tears Winery and Okro’s Wines in my recent post. Having not visited either, I’m afraid that’s all I have to say about that. I guess it gives me a reason to go back!

Great info. I developed a love of Georgian Amber wines on a trip there last year. Unfortunately they’re not available in Australia. Guess I’ll just have to get myself back there! Some of those wineries you’ve mentioned definitely look like places to add to my touring list.