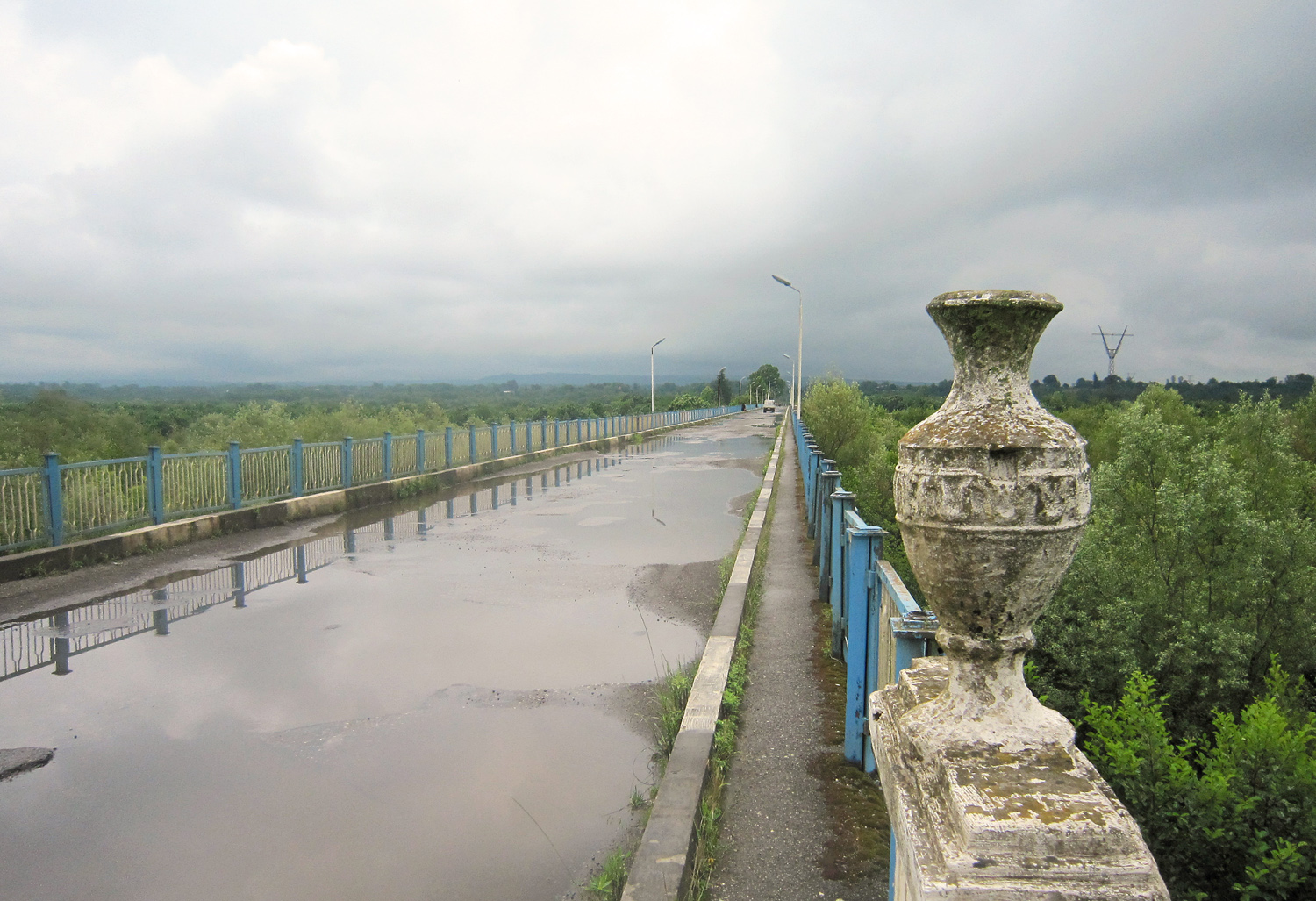 The last leg of our Georgian Adventures took us to the controversial Republic of Abkhazia, the self-proclaimed independent region at the Northeastern tip of the country.

Let me start with some practical information (dating from July 2010) for prospective travelers. Getting there isn’t trivial. The airport is closed, and its reconstruction is being delayed for reasons both political and economic. The seaports are deserted. The train stations are in ruins, although service has now been restored between Sukhum, the capital, and the Russian city of Sochi. Riding this train on tracks that have been abandoned for nearly 20 years is probably quite an interesting experience, but I haven’t tried it. The most common point of entry is the Psou crossing point on the Russian border. With a double-entry Russian visa, you can enter Abkhazia by car or by foot here without any problem.

Things become a lot more complicated if you’re on the Georgian side, like we were. There are no flights connecting Georgia and Russia. There is a boat connecting Batumi in Georgia and Sochi in Russia, but they don’t take foreigners — I was never able to clarify if foreigner means non-Georgian, non-Russian, or non-ex-Soviet, but it doesn’t matter.  The only real way into Abkhazia, then, is via the Ingur crossing point. Though rather than “crossing point”, I should really call it a “cease-fire line”, since Abkhazia and Georgia are still at war.

Unlike what you may have read elsewhere, this is doable. You just need a little patience! Start by applying for an Abkhazian Entry Permit here. If you’re lucky, you should get the permit in about 5 days. It is however fully possible that the lazy staffers at the ministry of foreign affairs are too busy checking their Facebook pages (literally!) or chatting over a glass of orange juice to answer you, no matter how many times you re-send your application. With that eventuality, it helps to have a hotel in Sukhum deal with the paperwork in person on your behalf— you’ll have to stay in Sukhum for some time anyway, to get a visa.

If you choose to stay in Zugdidi, a taxi will take you to the Ingur crossing point in about 15 minutes, for a very small fee. The Georgian “customs officers”, a group of plainclothes cops in a black Mercedes, are actually friendly enough. They were a bit perplexed to see a group of guys from New York, Paris, and Moscow, respectively, trying to enter enemy territory together, but after telling our story 3 times and waiting for over an hour, they finally let us cross the bridge and even asked us to send them pictures — some of them grew up in Sukhum but haven’t been there for 20 years.

You can only cross the bridge over the Ingur River by foot, or in this lovely carriage:

The bridge is pretty long, with only a handful of Georgian soldiers on one side, and whole barracks of Russian soldiers on the other (sorry, no pictures allowed). The people you will see are mostly locals, going to work or shopping on the other side of the border, and the occasional UN truck with rocket impact marks on its trailer.

Arriving on the other side, an armed Abkhaz custom officers verifies you entry permit, shakes you hand, and welcomes you to Abkhazia. You can arrange for a pickup with your hotel in advance, but you should be able to find a taxi to take you to Sukhum. If you choose the former, just be aware that cell phones don’t work at the border and hotel drivers won’t wait for you forever, so make your plans well ahead of time. Taxis can be pretty expensive, especially in a spot like this where you may not really have a choice. To complicate matters a bit more, you must be prepared to pay in rubles (or maybe dollars, or euros), as Abkhazia doesn’t use the Georgian Lari and the only ATM in the country (literally!) probably won’t take your card.

The drive from the border to the capital takes about an hour and a half. You’ll pass many gorgeous ruins and decrepit buildings inhabited by a handful of people who decided to stay.

Abkhazia will satisfy your cravings for Soviet relics even more than Georgia. You’ll see abandoned structures of questionable purpose, little kiosks in the middle of nowhere, gas trucks of another age selling fuel on the roadside…

You’ll see once-mandatory “Houses of Culture” and imposing mosaics promoting communist achievements, from the proletarian to the improbable: land surveying, jack-hammering, space travel, peace (quite ironic given the circumstances)… Forgotten mottos on the streets (“Our main goal is communism”)… It’s all there!

On the way to Sukhum, Ochamchira in particular preserves many symbols of daily Soviet life: the abandoned GAI (State Automobile Inspectorate) booth, the decorated bus stop, and the clichéd sculpture. It seems like every sculpture in Abkhazia must have a marine theme, in case you need reminding that you’re by the sea.

The new powers in place have added their own contributions,  and throughout the country you can see billboards singing the praises of free, independent Abkhazia:

Coming next: visiting the markets and restaurants of Abkhazia! And if you can’t wait, why not try my achma recipe in the meantime?

[…] our previous adventures, we entered Abkhazia, an almost-country that already has a language with a funky Cyrillic alphabet, […]

Thank you, it was very helpful, since I’m planning to do the same thing…

Good luck with your trip, Ashmir!