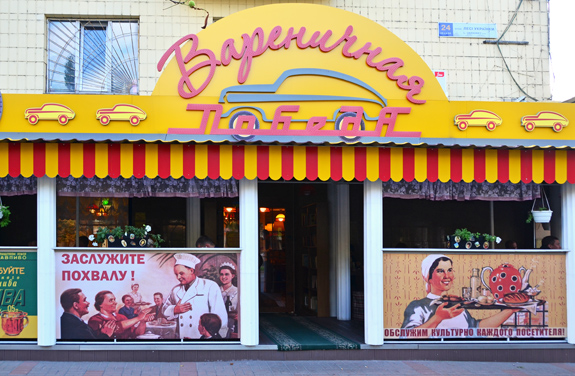 Ah, the good old days of Aerosvit! New York-Kiev non-stop in a mere 10 hours, on a plane with nearly non-existent entertainment but at a reasonable price. I’ve used Kiev as a stopover on many trips, spending anywhere from a few hours to a few days there before heading on to Azerbaijan, Georgia, Uzbekistan, or just some other part of Ukraine. Back in August 2012, I was there for about 10 hours, on my way to Tashkent…

Being roughly 4 times less busy than Moscow’s Sheremetyovo and 6 times less busy than New York’s JFK, Borispol was a reasonably efficient airport. A mere 30 minutes after landing, I had already cleared security and picked up my suitcase. Once I’d stashed said suitcase in the baggage room, I hopped in a taxi. Another 30 minutes and I was in central Kiev, cool as a cucumber and ready for lunch. No, I did not go to Mafia, a chain of Italian-Japanese restaurants-cum-karaoke bars. I decided on the real mafia restaurant instead, the one where your chauffeur parks your Porsche Cayenne in the middle of one of central Kiev’s main boulevards while you eat: restaurant Kazbek. Kazbek is a Georgian restaurant on the fringe of a neighborhood that my cab driver poetically called Mezhduzhopie (literally, “between asses”), located as it is between the Rodina-Mat monument and the Lesya Ukrainka statue, which turn their backsides to one another.

The menu is full of classic Georgian fare. I’m not going to write a restaurant review more than two years after my visit, but I did find a few interesting dishes from which I might draw inspiration. First, I tried a khachapuri kebab. From what I could tell, cheese, tomatoes, and basil were placed on a skewer, then wrapped in a kind of puff pastry, and cooked on a mangal. How the whole thing didn’t end up falling on the coals is beyond me, but I’ve got to try it and find out. Next came the veal brains with creamy saffron sauce. Though saffron isn’t really Georgian (marigold is), I remember it being pretty good. I posted a recipe for pork brains Telavi a few years ago, and I’m always looking for more fun ways to prepare brains. For dessert, I tried the baklava. I don’t think it was particularly successful, but it’s rather unusual to see baklava in a Georgian restaurant. I’ve never had real Georgian baklava, but I know it exists — I even have a recipe. Coffee, anyone? In Ukraine, baristas hold shop right in the backs of their panel vans. And apparently wear silly hats. Hunters too look different in Ukraine, at least if we are to believe the ads for Hunting & Gun Magazine. I also remember visiting a hunting and fishing store nearby. Add to that the Pro Okhotu I Rybalku [Of hunting and fishing] cookbook that I found in a bookstore later that day, and I could officially declare that hunting was (still is?) gaining popularity in Ukraine. Even if these days the most wanted species is probably the Russian Separatist. Back to Lesya Ukrainka Boulevard. Number 24 is decorated with an impressive Soviet mosaic, featuring rather complicated themes. In my pictures, I can see planes, stars, flames, a film strip, a pendulum, a compass, a TV set, and somewhere something that must represent the cosmos. And the mosaic is very long. A few feet further, it’s the Kiev zoo, with peacocks and penguins. Not exactly Ukraine’s mascots, but Andrey Kurkov would appreciate. Further on, people are playing chess with their pet seals. The last part of the mosaic is more accessible, and belongs to what I’d call pastoral socialist realism. Just like the Georgians spend their time making wine, drinking, and singing in Soviet mosaics across Georgia, the Ukrainian is shepherding and resting in a field. At least until his transformation into Homo Sovieticus, a man constantly working towards technological progress and a bright communist future (that’s the first part of the mosaic). If only the peacocks could fit in my interpretation… By the way, the store in the above picture is a gastronom, where you can buy all sorts of Ukrainian prepared foods: golubtsy (stuffed cabbage), veal liver with onions, venison stew in berry sauce, roasted suckling pig, lamb lyulya-kebab, tefteli (meatballs), meat zrazi (stuffed cutlets), chicken Kiev, and boiled (!!!) chicken cutlets, to name a few.

To continue the Soviet nostalgia, number 24 also hosts a varenichnaya (a varenyky restaurant) called Pobeda, complete with period posters. Notice how Soviet-themed text is preferentially written in Russian. Pobeda means victory in Russian; it was also the name of a car produced by GAZ in the 1950’s. My walk on that August day then took me to the Khreshchatyk, a few stores, and the Besarabsky Market — which I’ll talk about next time.

Florian, I spent 3 days in Kiev last summer, in a little appt just above Maidan Square. I failed to do several things planned very carefully – force majeure! One of them was to get Chicken Kiev which I used to love when we lived in England and could get delicious CK from M&S. Eventually I googled the dish to learn what I had come to suspect: it is not a Ukrainian dish but was invented in NY in the early 20thc to please emigrés from Kiev. So how come you found it in a gastronom?
BTW,
We plan a few days in Paris mid-April. You said you don’t know of any good Georgian restos there: how about Hungarian, Transylvanian, Armenian, Ukranian, Uzbek?
Best, Julianna

Fascinating – I’ve never been, but thanks for the mini vacation!

Wish I read this post before my trip to Kiev, now 3 weeks ago. Will check with your blog before my next trip into Eastern Europe.
Cheers,
Micky