Today I’m starting a new travel series: Ukrainian Snapshots. I’ve been to Ukraine many times over the past ten years. Back in the days before Aerosvit went bankrupt, the New York-Kiev direct flight was a convenient and reasonably affordable option whenever I planned to visit the former Soviet Union. Before the opening of its new terminal, Moscow’s notoriously disorganized Sheremetyevo did not have a transit zone and therefore required going through the masquerade of the visa process (until recently, your typical Russian embassy/consulate was a kind of cour des miracles where aspiring tourists proffered fake invitations, bogus travel insurance, variable amounts of money, and countless hours of their time to a grumpy and/or corrupt clerk, all to receive a piece of paper pompously called a visa). By contrast, Ukraine could be visited without a visa, and little Borispol is 30 minutes away from Kiev’s center (no contest with the 1-2 hours it takes to get from the airport to the city center in Moscow).

For this reason, and also because some of Ukraine’s less touristy destinations are more conveniently accessed from neighboring countries if you happen to already be visiting them, many of my trips to Ukraine were quite short; a couple days here and there. My last week-long trip actually goes back to summer 2006 (Crimea). So instead of presenting my Ukrainian travel stories in any particular order, I’ll focus each of my posts on a given place and point in time. As usual, don’t expect me to review many mainstream touristic curiosities — this is not a travel guide. I might also start another travel series in parallel. After all, with Ukraine International Airlines recently reviving the New York – Kiev route, there might very well be more snapshots to come in the future.

I’ll kick off this series with an anecdote: the Kiev-Odessa flight and the Tupolev 134. This may not have anything to do with food, but it sure qualifies as an adventure. 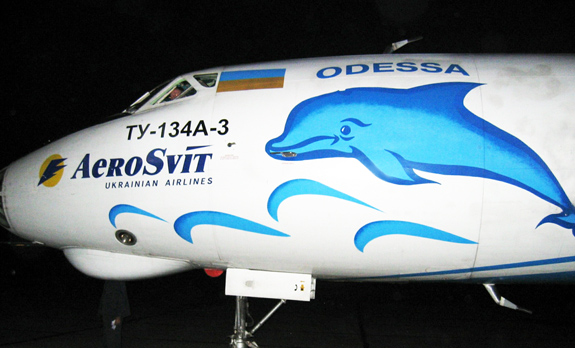 How often have you taken an airplane with dolphins painted on it? Probably never. Well, had you spent half a day in Borispol’s decrepit domestic terminal in transit to Odessa, circa 2005, you could have checked the plane-with-a-dolphin-painted-on-it box, while enjoying your flight on an infamous Tupolev 134.

First launched in the ’60s, the Tu-134 was one of the most widely used aircraft in the Eastern Bloc. Sadly (so to speak), the number still in active service has decreased sharply, officially because of noise restrictions . The last companies still operating the Tup are Air Koryo (the North Korean airline), Marsland Aviation (in Sudan), and a handful of tiny Russian airlines you’ve never heard of.

I could probably cite another reason for the Tup‘s decline: by today’s standards, even in cattle-like economy class, it’s pretty crappy. Think of it as the Fung Wah bus of the skies. Comfort is non-existent, seats are narrow, there’s no room for your luggage, and it’s not rare to see smoke coming out of the ceiling somewhere. It really looks and feels like you’re in a bus, except at some point it takes off from the ground. That’s not a reassuring thing.

Flying on a Tu-134 is also a wonderful opportunity to observe the Homo Sovieticus in his natural habitat. “I don’t fasten my seatbelt because it’s useless. I drop my duffel bag in the middle of the tiny aisle. I can’t be bothered putting my bag in the overhead compartment properly. And of course, as soon as the first wheel of the plane has touched down on the tarmac, I’m up, grabbing my bags and rushing toward a door that might take a good half-hour to open.”

As to why Aerosvit would paint dolphins on its planes, apparently there’s a decent population of the cute mammals in the Black Sea. 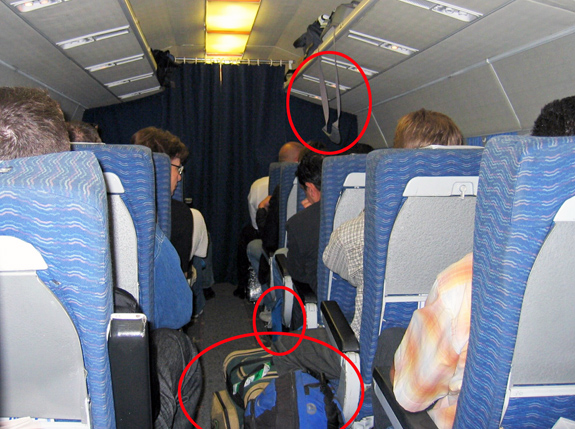 A wonderful flashback for me. I travelled from Cherkassy to Odessa in 1996 (we lived in Cherkassy from Feb. – July ’96), but we went by train. It was incredible. My five months in Ukraine as a naïve 16 year old from Ontario completely changed the course of my life (and my palate!). Can’t say I’ll ever like salo or kvas, though.

Thanks for sharing! Too bad you didn’t take the plane, I was hoping for something like “Tupolev changed my life” 🙂