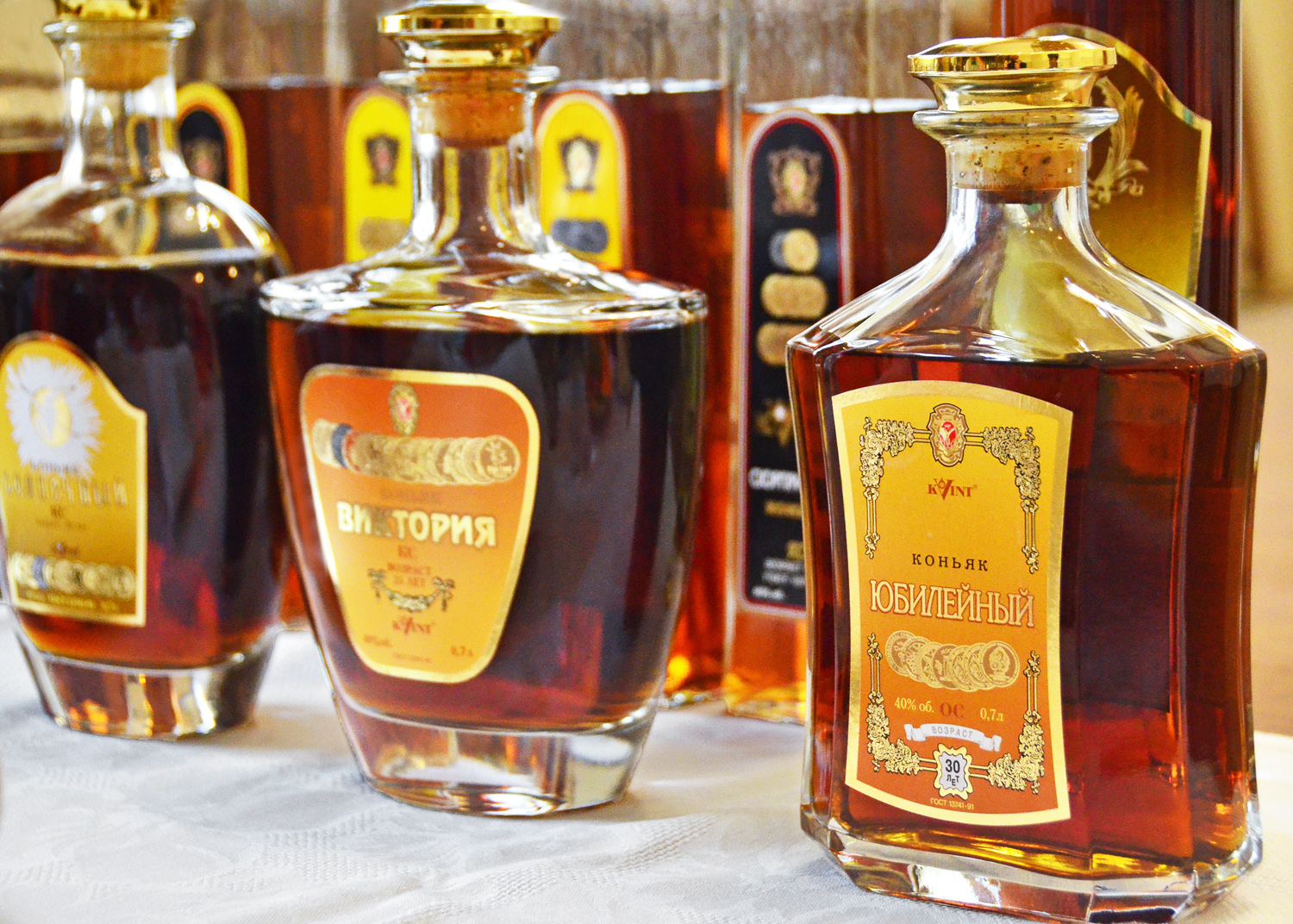 In my previous Moldovan Impressions, we explored the local culinary traditions, visited the wine cellars, and discovered the renegade republics. We will soon leave Moldova to move on to stories of neighboring Ukraine, but before that, a little digestive is in order.

In capitalist societies, class inequality has led to Cognac being the privilege of the rich (and hip hop culture). Countries that were not so long ago devoted to socialism have been quick to try to replicate the Western lifestyle, in their rush to establish market economies (and hip hop culture). Meanwhile, bourgeois distilleries have ensured their monopoly through an appellation contrôlée — a rather dubious one, when you think of it, for a beverage whose double distillation most certainly erases any trace of terroir.

In the Soviet Union, however, the Politburo and the proletariat shared the same luxuries throughout the Empire. If brandy production started in both the Caucasus and Bessarabia at the end of the 19th century, one can thank communism for the spirit’s true democratization. Indeed, in 1978, the Ministry of the Food Industry decreed that every Soviet Republic must produce its own ordinary “cognac”. In Moldova, one producer of both the aged brandy and the democratic version (called Белый Aист, “White Stork”), was Kvint, in Tiraspol. 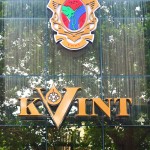 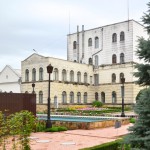 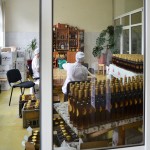 Kvint is actually an acronym that stands for Cognacs, Wines and Beverages of Tiraspol. The factory was founded over a century ago and is Transnistria’s oldest still-operating commercial enterprise. In a republic that doesn’t produce much of anything, It enjoys unrivaled popularity, and is even represented on one of the bills of the local currency, which is at least as illustrious as being selected for the design of a one-cent stamp.

Kvint is really a jack of all trades. Not content to make something like twenty different brandies, they also produce a dozen wines, almost as many vodkas (including the humorously named Kvintoff), plus three calvados and one gin. But we’ll focus on the popular brandies, called divin in Romanian. 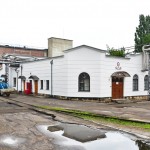 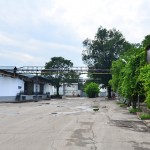 To summarize the fabrication process, distilled wine is aged in oak barrels between three years (for the Kvint VS) and fifty years (for the Prince Wittgenstein). After maturation, the final brandy is assembled by selecting spirits from various barrels and adding sugar (the Soviet touch) and sometimes caramel (something that many real Cognac houses do as well). It is then poured into casks again to let the flavors blend for at least one year, or more, for the top-of-the-line products. The wine used for the distillation is simply described as being made from “selected grapes of classical European and local varieties”, so just as with Cognac, you can assume it’s some plonk nobody wants to drink. 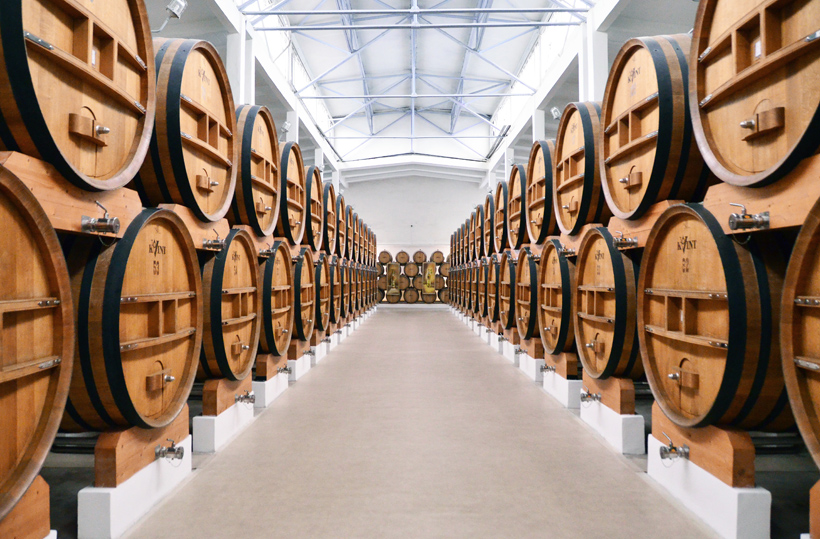 The Kvint factory offers various tasting options, though “tasting” is an understatement when their 30-milliliter pours are almost as generous as what you’d get in a bar. The most affordable package, at $30, combines a visit of the factory with a tasting of 6 brandies. The high-end tastings offer 10 products for $70-100 — that’s nearly half a bottle of alcohol — served with enough food to fulfill your daily calorie intake. Just so you don’t have to go through the ordeal of drinking such a ridiculous amount of cognac on a summer afternoon, here are my tasting notes.

We started with the Kvint 5 Stars, which in Soviet parlance means 5 years old. The first thing one notices is that it is indeed sweet. Not remotely as sweet as a liqueur of course, but definitely mellow. Although it isn’t complex by any means, it’s not bad. And it’s not very expensive. Dirt cheap, in fact. 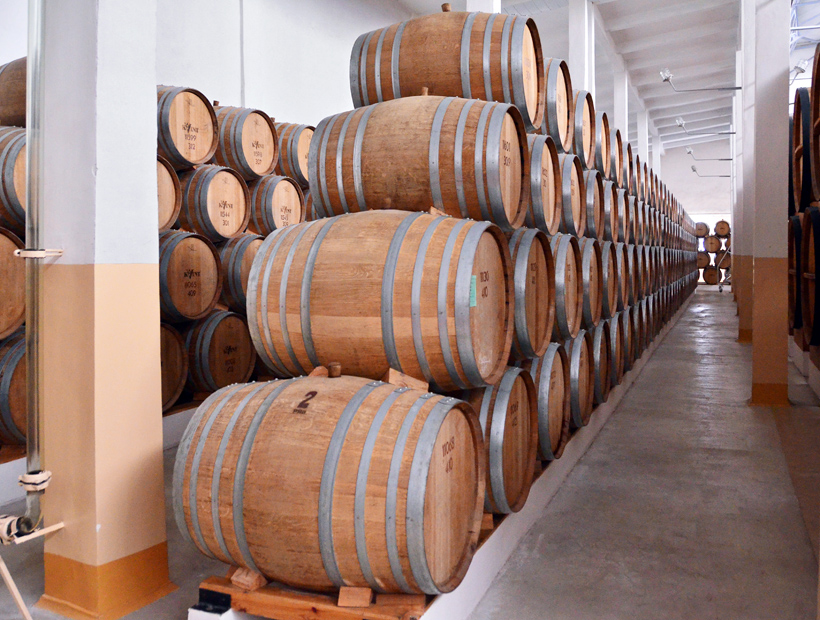 The Tiras (which means Dniestr in Greek) is just one year older, 6 years old, but not as sweet. The sugar content is 7 g/dm3 to be precise.

The Nistru, which this time means Dniestr in Moldovan, is 8 years old. This one is much sweeter and was deemed “for women”, back in the communist days. Sugar content is 25 g/dm3 — that’s 2.5%.

On the contrary, the Doina (named after a kind of Romanian folk songs), 9 years old, boasts the same low sugar level as the Tiras, and is therefore a drink “for men”. It’s more or less similar to the Tiras; the 3 extra years didn’t make much of a difference. 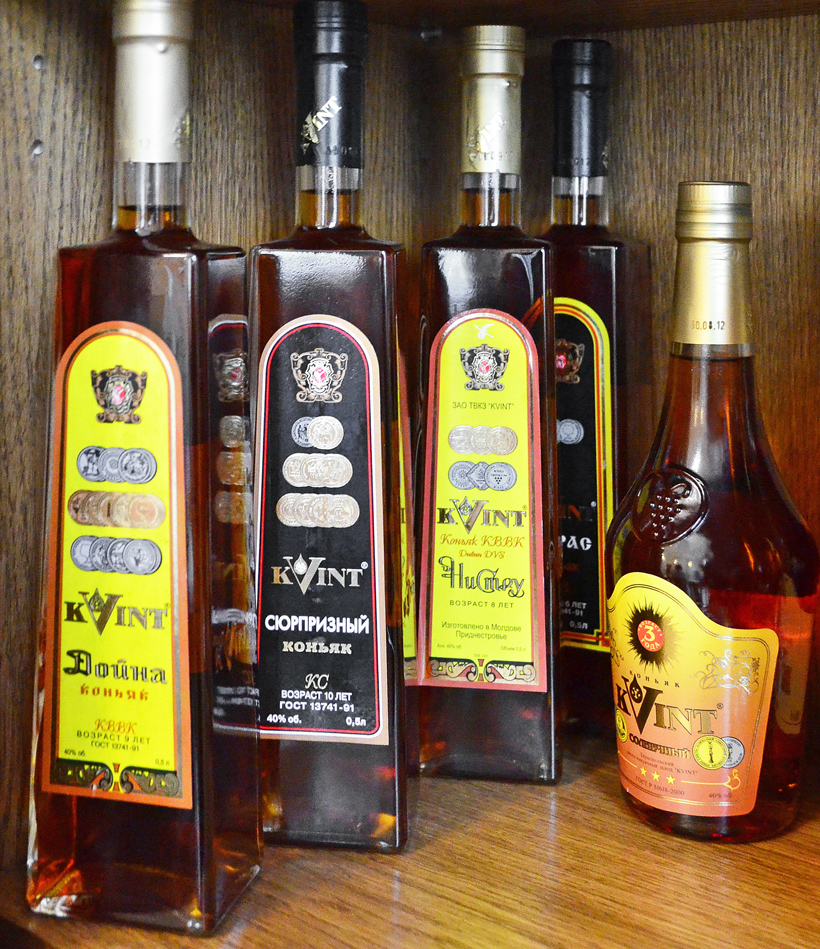 The Surprizny is 10 years old, and from this age point on, the brandies don’t contain caramel anymore. Surprizny used to be prepared for Soviet party officials only, before becoming part of the regular product line. Still slightly sweet and offering a fuller flavor than its younger siblings, this is the most popular of Kvint’s so-called line of “fine brandies”.

The 15 year old Tiraspol was launched in 1997 the mark the 100th anniversary of the factory. It’s smoother than the Surprizny (probably thanks to its 15 g/dm3 sugar content), but there isn’t otherwise much difference. You’ll note that I haven’t spoken about the nose of any of these spirits so far. That’s because all of them up to this point are pleasant but pretty generic: they smell like oak.

The Solnechny (which means “sun”, because… “a glass of this brandy is virtually a particle of the sun captured in crystal”) is aged for 20 years plus another 3 years after the assemblage. It’s supposedly made with only the most flavorful barrels. The color is much darker, and you can clearly recognize caramel and vanilla on the nose. This is the first spirit of the line that I would really call good and would consider buying to enjoy on its own. Incidentally, it also costs about double the price of the Tiraspol! 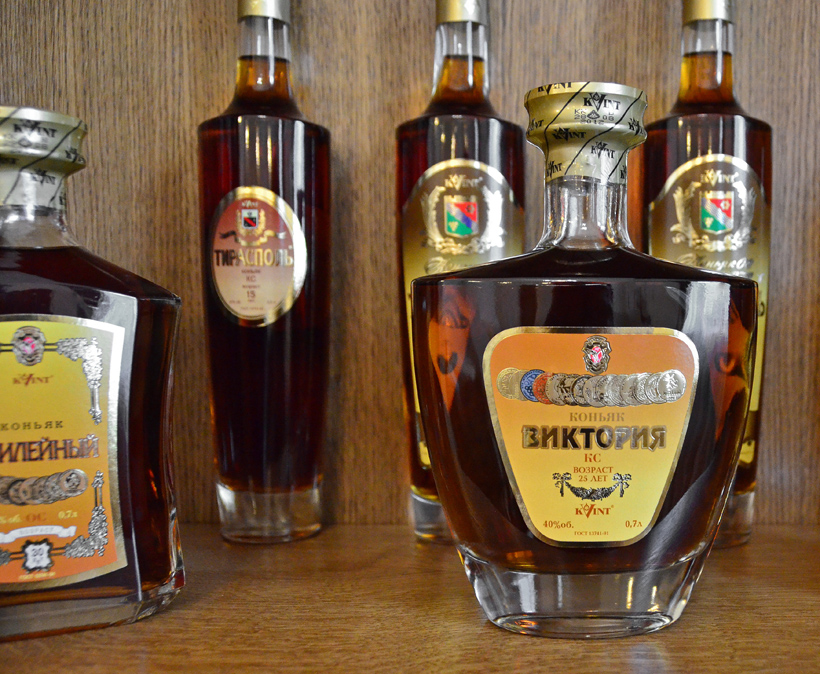 The 25 year old Victoria boasts a full flavor, rounder than the Solnechny, and maybe still a bit sweet.

The Yubileyny opens the category of the very rare brandies — it’s 30 years old and was created in 1984 for the 50th anniversary of the October Revolution (hence the name). With more oaky flavors and a lower sugar content (7g/dm3), it’s probably my favorite of the whole tasting. 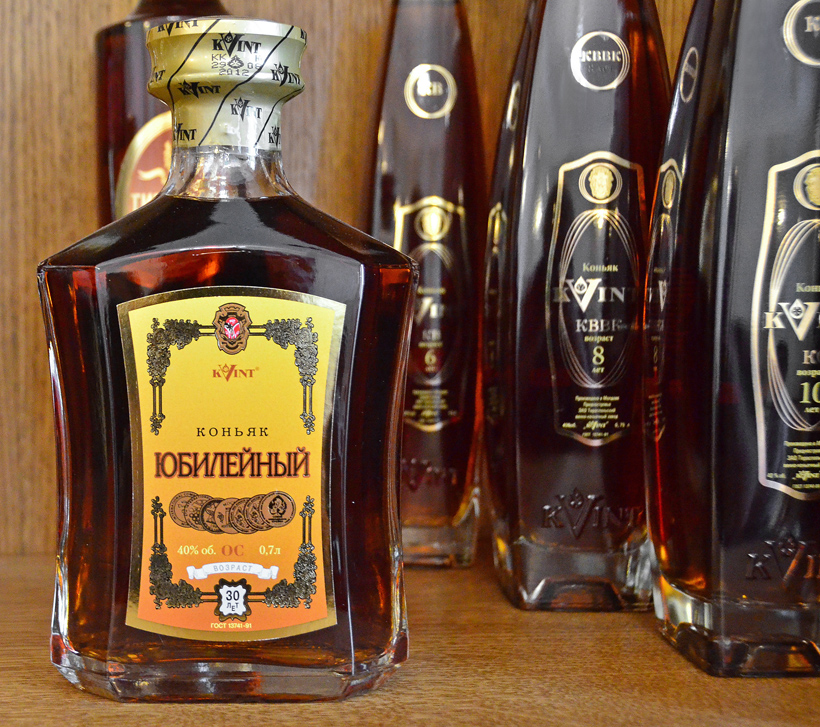 Finally, the 40 year old Suvorov was first prepared in 1992 for the 200th anniversary of TIraspol. In case you’ve forgotten your Transnistrian history, Suvorov was the founder of Tiraspol. It’s sweeter again (15 g/dm3) for no obvious reason, but otherwise it’s not than different from the Yubileyny. Does it really make sense to add that much sugar to 40-year-old spirit?

The tasting now over, we leave Kvint, Tiraspol, and all of Moldova behind us, with a slight alcohol-induced euphoria, to cross the Ukrainian border and head to Odessa. Reviewing my Moldovan Impressions posts, I feel I’ve been a bit harsh on this little country. Even if the tourist attractions are non-existent and the cuisine hardly worthy of a food blog, the various cellars, wineries, and distilleries provide… maybe not quality products, but a chance to have a good time with friends and enjoy a cornucopia of victuals and beverages, often amidst rather singular decor. Drinking 10 digestives in a brandy factory after lunch in a breakaway territory? Check. Spending 4 hours in a boat-shaped, seashell-covered café in Gagauzia, downing two liters of vodka during a blackout? Check. Tasting wine made by mixing juice and alcohol, in an abandoned underground cellar topped with a fanciful miniature castle? Check. Enjoying lunch deep inside the bowels of a limestone mine, surrounded by the world’s largest collection of undrinkable wine, while a Moldovan fiddler plays sad Slavic songs? Check. Try to do the same in France or California. 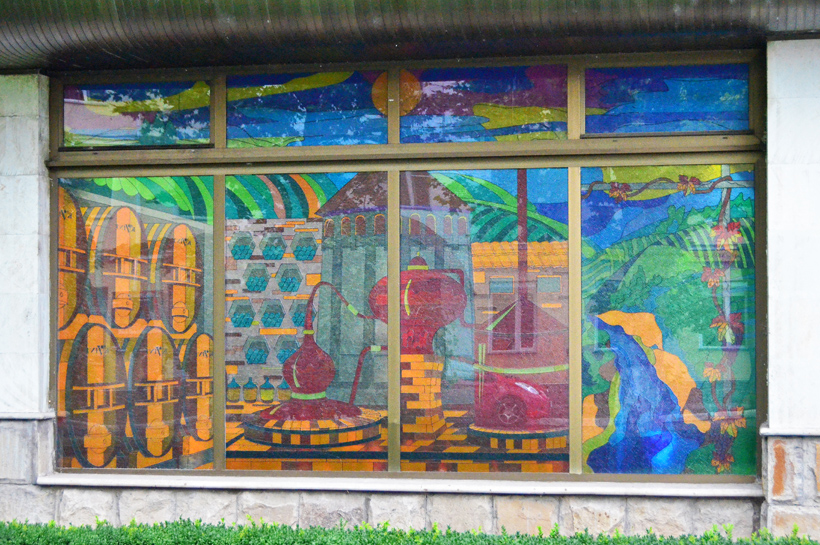 Thanks for sharing the impressions of Moldovans about cognac here. I have learned quite a lot of new stuff today, and I’ll make use of this content in my paper. That’d be best for me, I think.