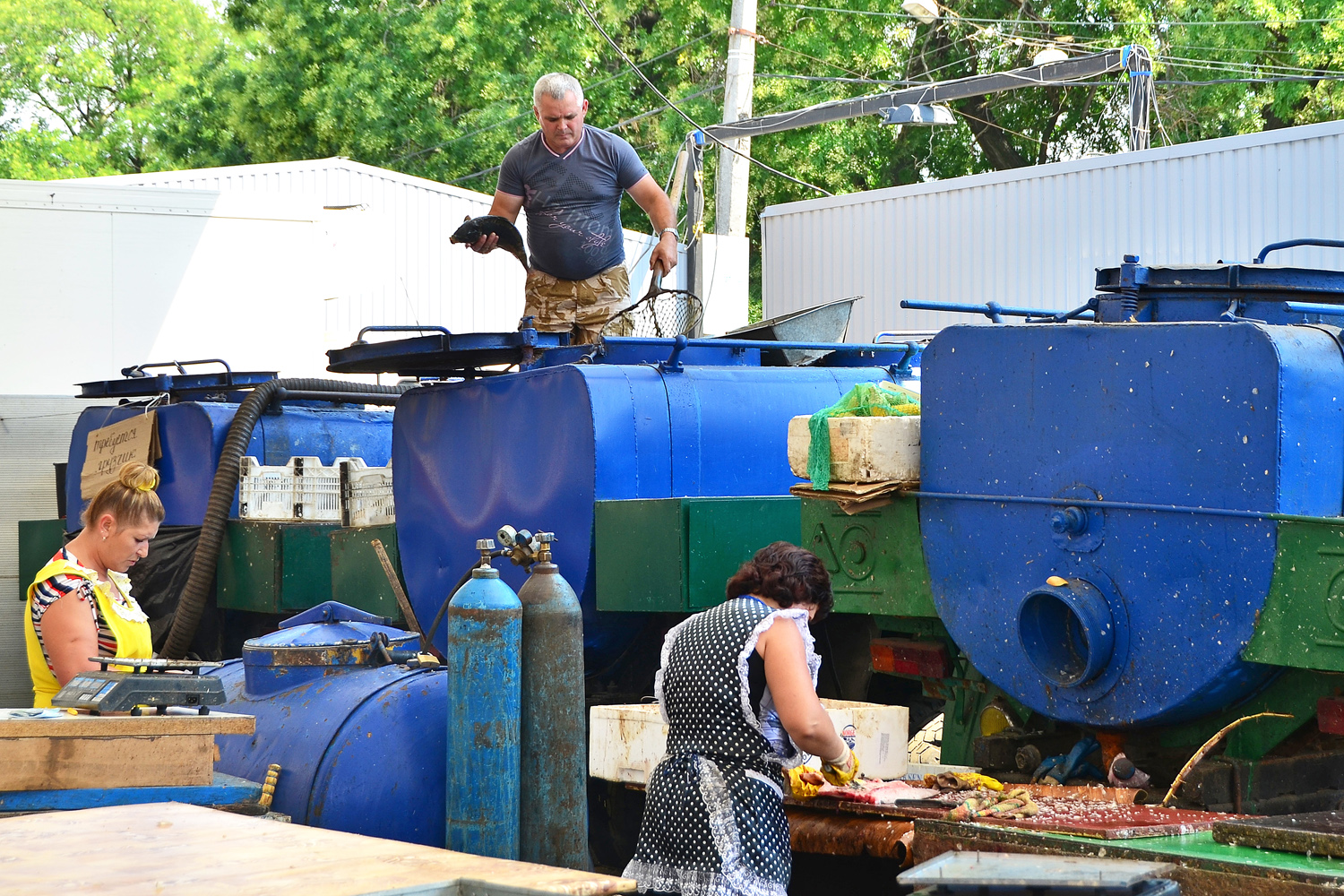 Aaah, Odessa: the legendary Potemkin Stairs, the mail-order brides, the mafia… and the Privoz Market.

The Privoz was created in 1827, originally as a handful of horse-driven carts next to the older Stary bazaar. As more buildings were constructed, it slowly became the largest food market in Odessa, and it remains so. Don’t expect any neoclassical splendor like Saint-Petersburg’s Gostiny Dvor, however. Privoz nowadays is a chaotic, busy market that sells food, clothes, and everything else, in a maze of outdoor food stalls and covered halls that won’t impress you with their architecture.

What might surprise you, though, is the variety of food on display. Especially seafood. 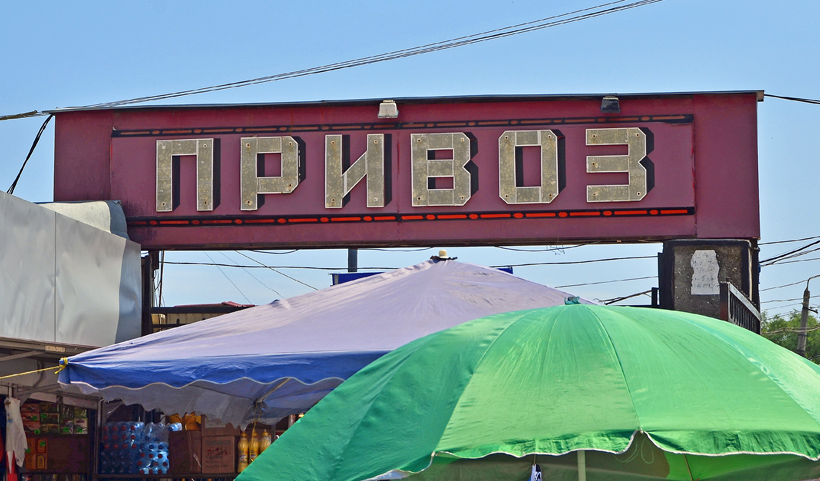 Dishes that come to mind when you think about Ukrainian cuisine, provided you don’t draw a complete blank, probably include various dumplings, potatoes, sausages, the famous borscht and other vegetable soups, or the ubiquitous-but-not-truly-Ukrainian Chicken Kiev — meat and produce, essentially. And like any other food market, Privoz sells its share of cabbages, cauliflowers, potatoes, tomatoes, cucumbers, eggplants, zucchinis, and peppers. 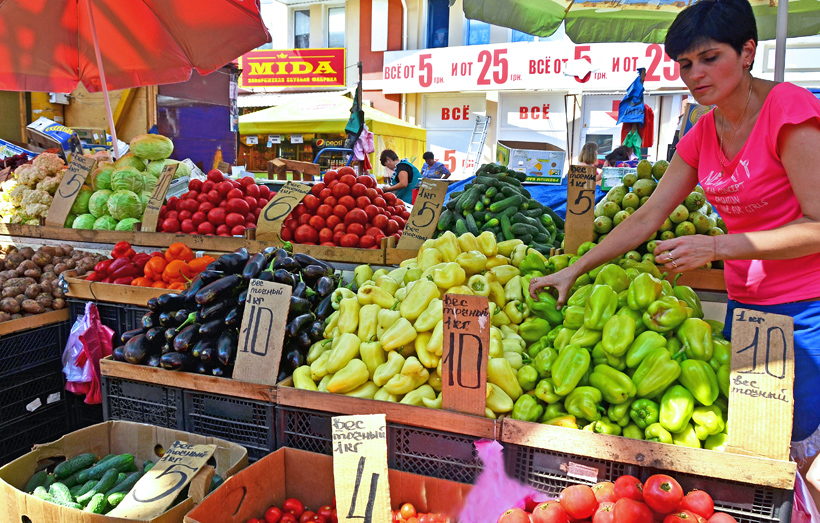 There’s an entire hall for butchers, although zealous security guards strictly enforced the no-pictures policy when I was there. Anyway, the truth is that the vendors offered a good but expected selection of meat; I didn’t see anything extraordinary. This was no Uzbekistan. The fruits looked just as familiar — what do you expect? Here are enough blueberries (from Northwestern Ukraine, apparently) to re-try all of my preserves, jam, and pie recipes combined. 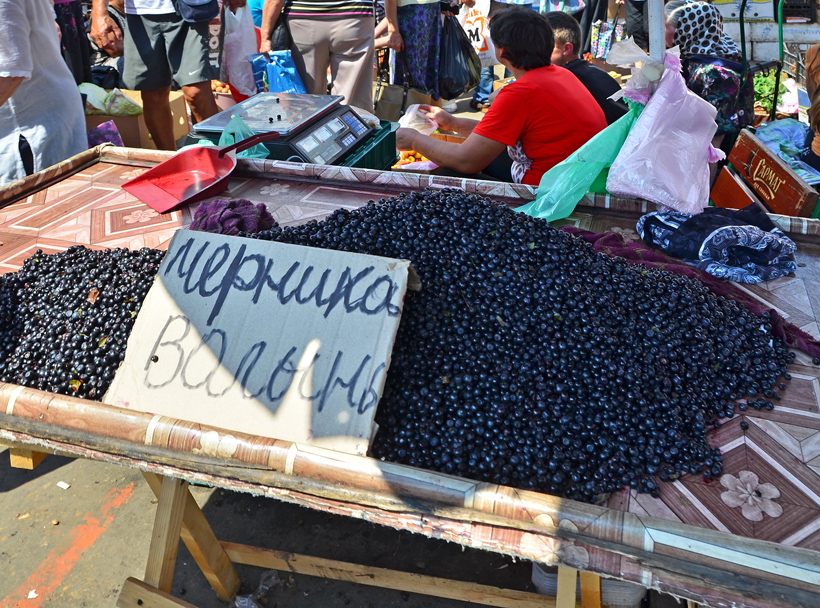 The fish and seafood section at Privoz is where things get really interesting. While shrimp, mussels, turbot, anchovies, and sardines would sooner evoke the Mediterranean, they can all be found in the Black Sea off the coast of Ukraine. Here we’ve got small pink shrimp, and even crawfish in the background: 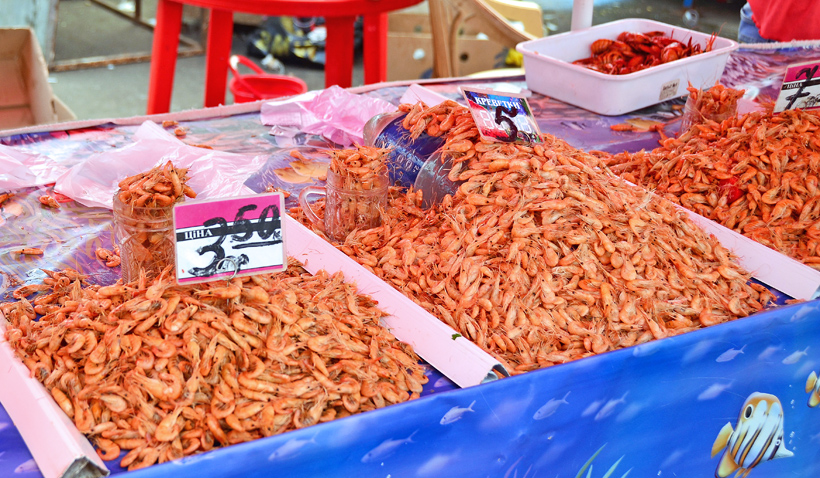 These small shrimp are typically eaten whole, with or without a skewer. They’re also used to stuff fish fillets, or in juliennes, which in Russian doesn’t designate a special way to cut vegetables, but an au gratin dish with mushrooms, meat or seafood, cream, and cheese. 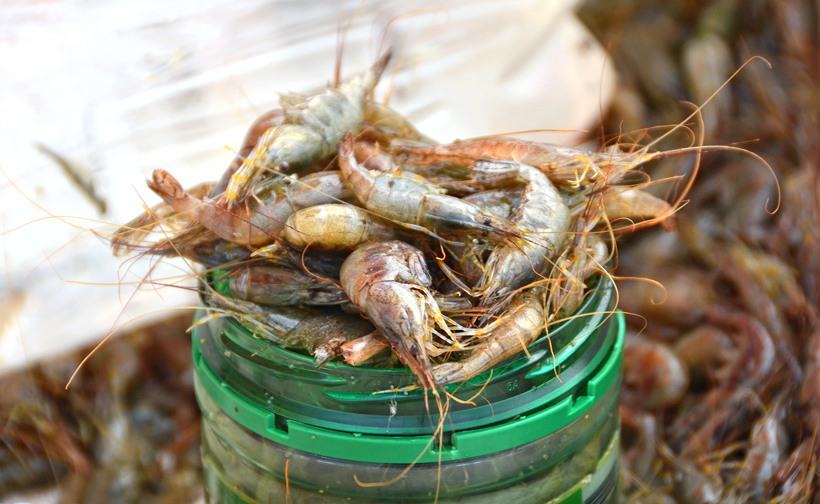 Mussels often receive the same treatment. One one Odessa restaurant menu, I remember seeing mussels baked in their shells with cheese and mayonnaise. Soviet gourmet cuisine at its finest! I’m not sure I’d order that, though… 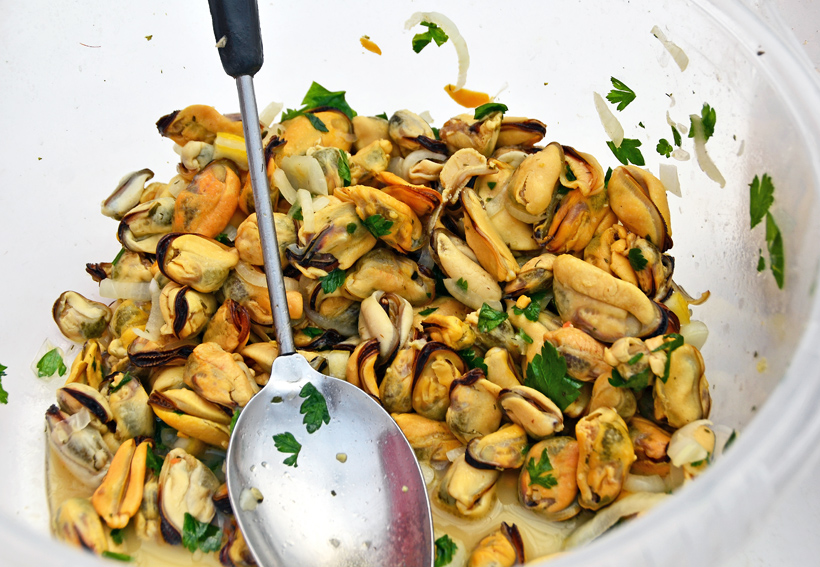 Then there’s the salted fish — lots of it. Here we see some vobla (aka Caspian roach) from Astrakhan, cured with the roe still inside the fish; taran (which is pretty similar I think); and lesch, freshwater bream. 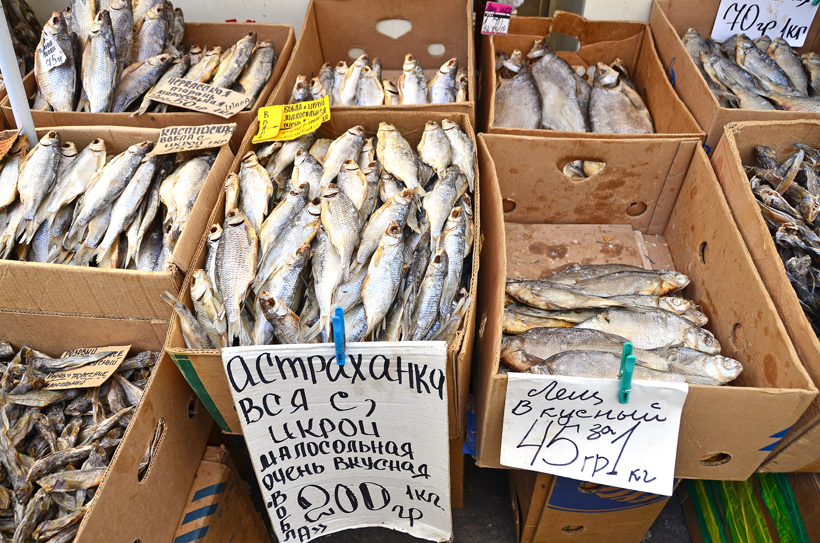 There’s also a wide variety of small fish: Danube herrings (aka dunayka), gobies (a fish found all over the world but of commercial importance mostly in Ukraine), sardines (“for cutlets”), and anchovies (“tasty, fatty, super!”). 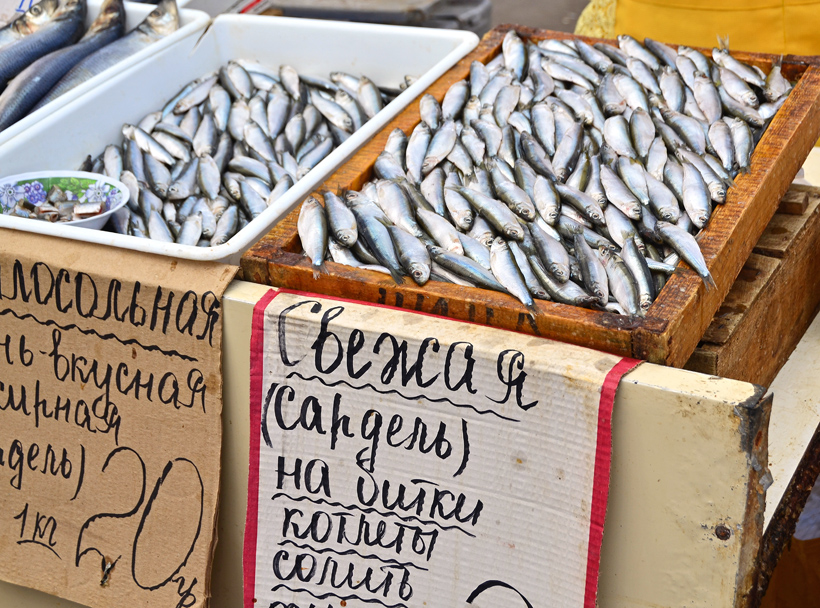 The most inspiring fish I saw at the market was the highly prized turbot. The refrigeration method was a bit questionable (what’s the temperature of the parts of the fish that are not covered with a piece of ice, at noon in the summer?), and I’m intrigued by the numerous little bumps on the skin (caused by barnacles), which I’ve never seen anywhere else on fish of comparable size. Still, with its firm flesh, large flakes, and delicate flavor, turbot is the darling of many Michelin-starred restaurants. Heston Blumenthal uses it to make his “perfect fish and chips” in In Search of Perfection. Its trimmings are among the best choices when making fish stock. In Ukraine, turbot is likely to be prepared in a simple way, baked or fried, with the usual garnishes including gherkins, horseradish, tomatoes, carrots, apples, cabbage, buckwheat, mushrooms, or potatoes. 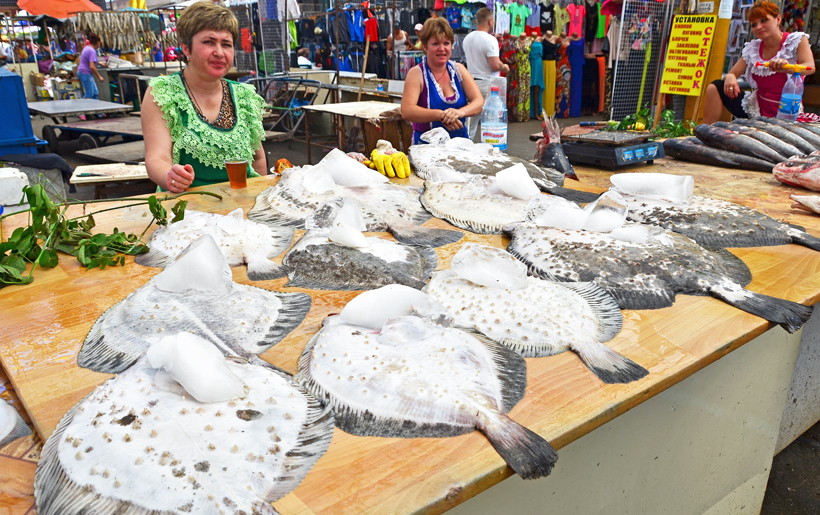 If the nearly non-existent refrigeration is a problem for you, there’s the ultimate fresh option: live fish, kept in tanks, netted and cleaned to order! Unfortunately, I can’t tell you what kind of fish we’re talking about… But if you’re looking for more pictures of the seafood at the market, check out this website. Among other things, you’ll see some carp, catfish, Caspian sprat, and garfish. 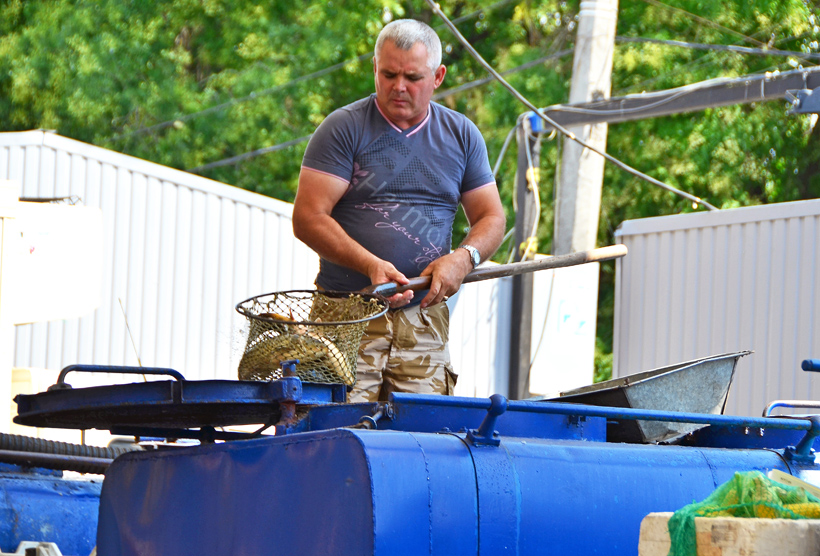 Privoz also inspired a lot of food-related jokes. Here are a couple to finish our tour!

A babushka is buying fish at the Privoz Market:
– Son, is your fish fresh?
– Of course it is, it’s still alive!
– I’m alive too, and yet…

A man’s looking at the seafood at the Privoz Market:
– Buy some fresh fish, sir!
– Is it really fresh?
– What a question! Just came out of the sea.
– Why are its eyes closed? Is it sleeping? And why does it stink like that?
– Listen, sir, do you control yourself when you sleep? 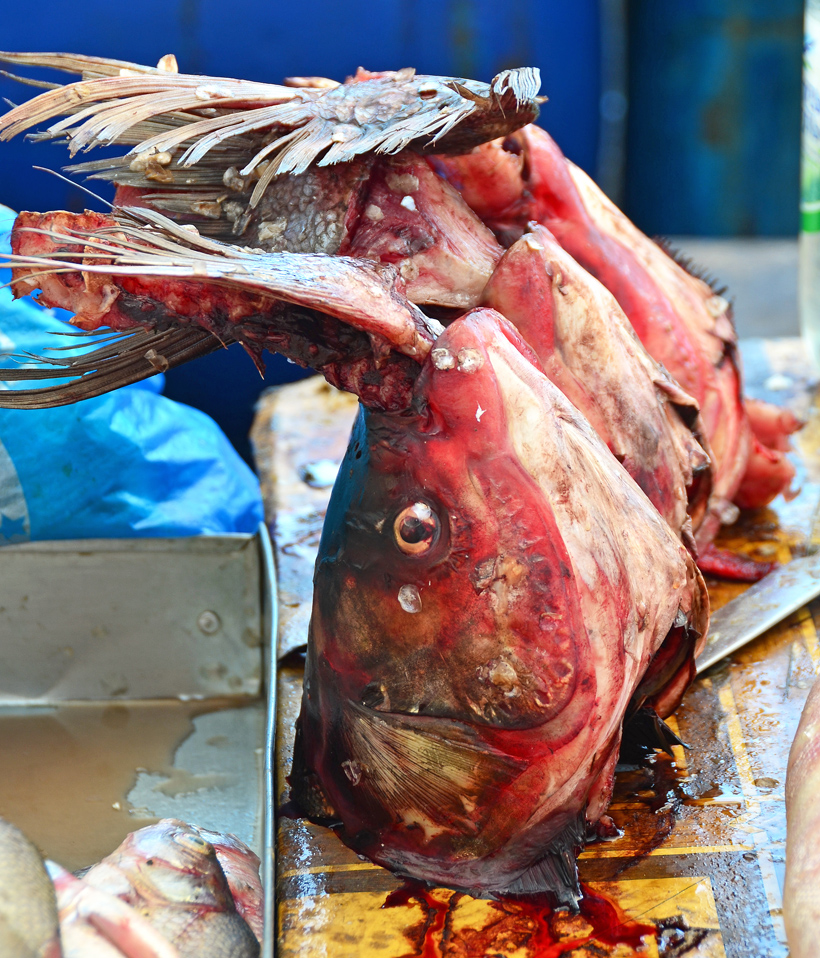 I was lucky enough to spend some time in Kiev and Vinnitsa in August this year and was amazed with the markets, there seems to be everything sold there. I love the traditional Ukrainian Food and my partner was cooking them all the time with the freshest of produce from the markets.
Great pics they really bring the market to life for me again