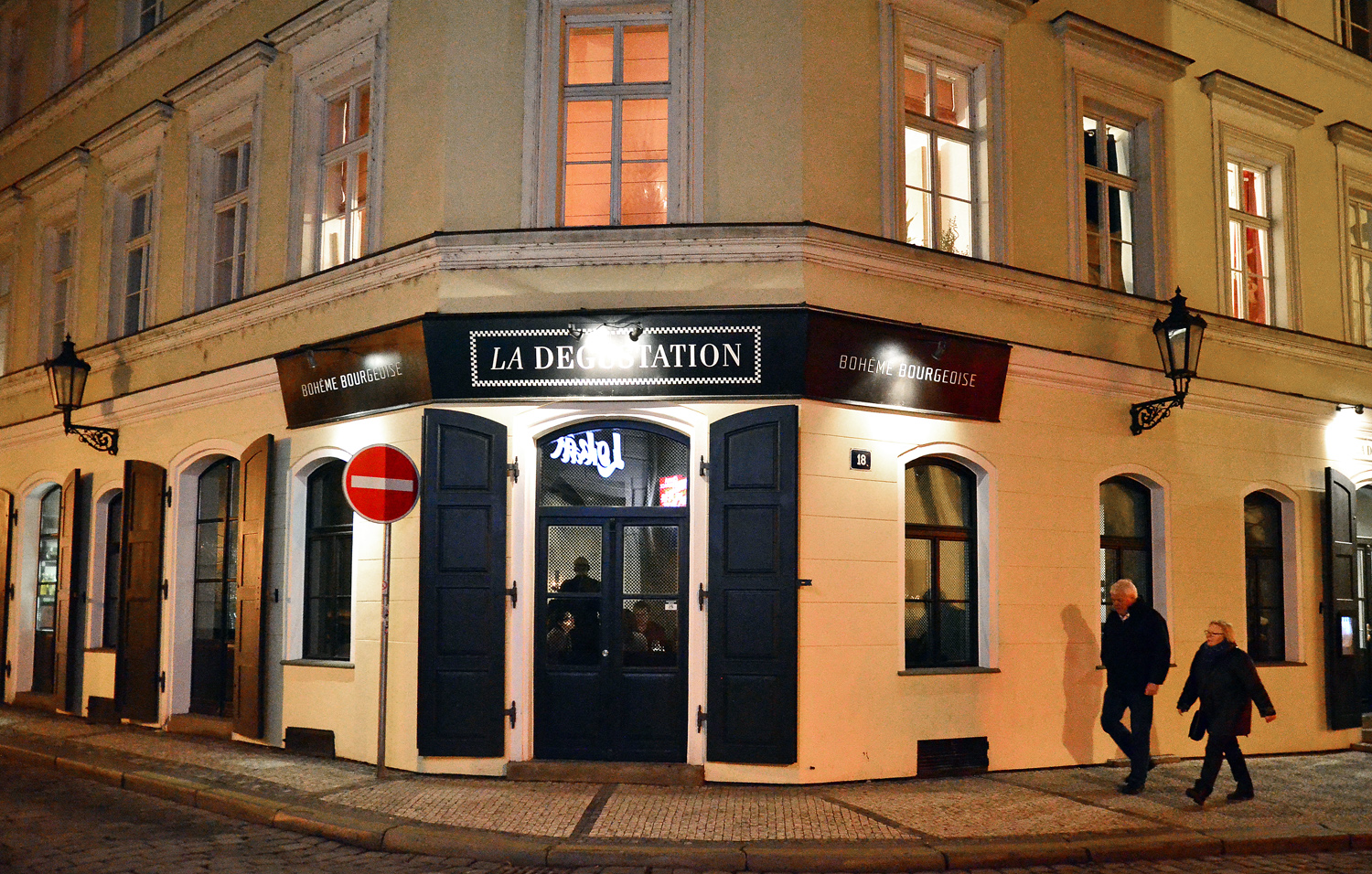 To continue our gastronomical tour of Prague, after the Blue Duckling, we’re heading to the Jewish Quarter for a dinner at La Dégustation Bohême Bourgeoise, one of only two restaurants in Czech Republic to have a Michelin star (the other one is Alcron, which serves an “international” menu). It’s also one of the only establishments, or maybe the only establishment, to promote a modern Czech cuisine. No Old Bohemian meat platters, roast duck, or bread dumplings today!

This style won’t be completely unfamiliar to Food Perestroika’s readers, as the executive chef, Oldřich Sahajdák, was also behind the late Hospoda in New York. I dug out an article from the Wall Street Journal that recounts Hospoda’s opening and talks a little bit about Sahajdák. What drew my attention most was the sadly non-prescient conclusion: “We’re pretty sure that in New York, if you do something well, people will find you.” 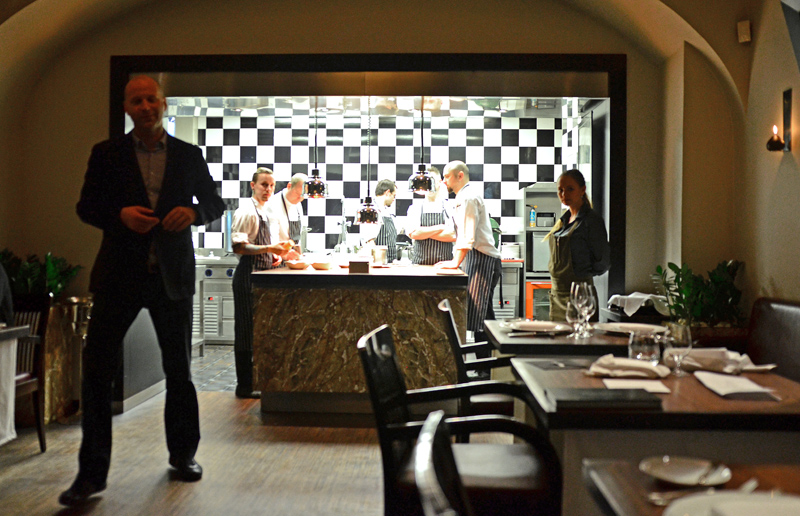 But back to Prague, and LDBB. The chef has been working with the Ambiente group since 1996, first in their eponymous restaurant, then at Café Savoy, a place that recreates the atmosphere of the cafés of the First Czechoslovak Republic (complete with Neo-Renaissance ceiling), where Franz Kafka used to hang out. He later took the reins of La Dégustation when it opened in 2006 —Sahajdák, that is, not Kafka. Here’s another article where the chef explains his philosophy. It turns out that the main source of inspiration for his modern creations is a Czech cookbook from the late 19th century, Marie Svobodová’s Kuchařská Škola (Cooking School), which sounds to me like the Czech equivalent of Elena Molokhovets’ Gift to Young Housewives. And we get another non-prescient quote from Oldřich: “If Czechs are cooking French cuisine, who is going to cook Czech cuisine? Certainly not the French”. I should have left him my business card.

While the modernly-furnished dining room is quite sober, especially by Prague standards, the main visual draw is the completely open kitchen where the chefs assemble all the dishes being served: 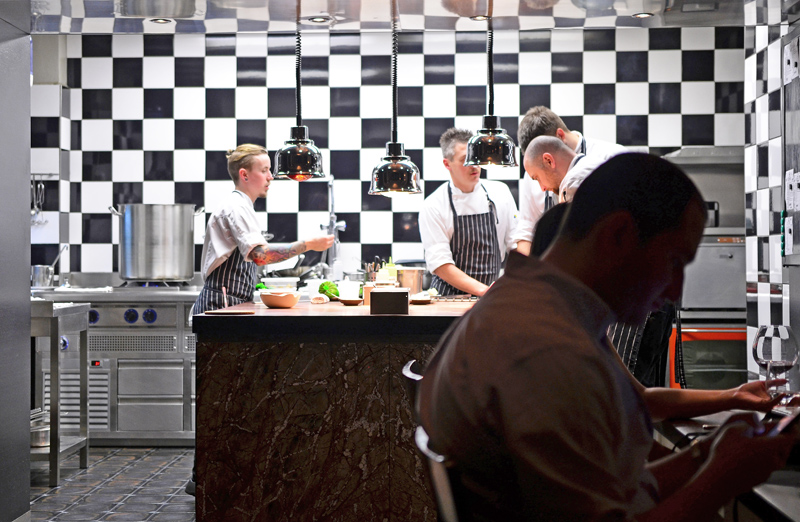 The menu offers two prix-fixe options: the Dégustation Bohême Bourgeoise, 6 courses that represent an “interpretation of the refined culinary school of Marie B. Svobodová from the late 19th century”, and the Dégustation du Chef, which is composed of the same plus 5 additional courses featuring “modern cooking techniques and new trends” by Oldřich Sahajdák. In pure modernist fashion, each dish name simply consists of three or four ingredients: a boring habit that I find about as inspiring as an Ikea catalog, the absolute opposite of the Proustian madeleine. Luckily, the stated provenance of some ingredients adds a touch of variety — maybe it even evokes something for Czech geography buffs.

Either prix-fixe can be served with wine pairings or with juice pairings. Not plain, pure juices, mind you, but unusual, diluted juice mixtures specially crafted to mimic wines and really pair well with the food. Some juices are served at room temperature, and some colder. Now let’s get started! 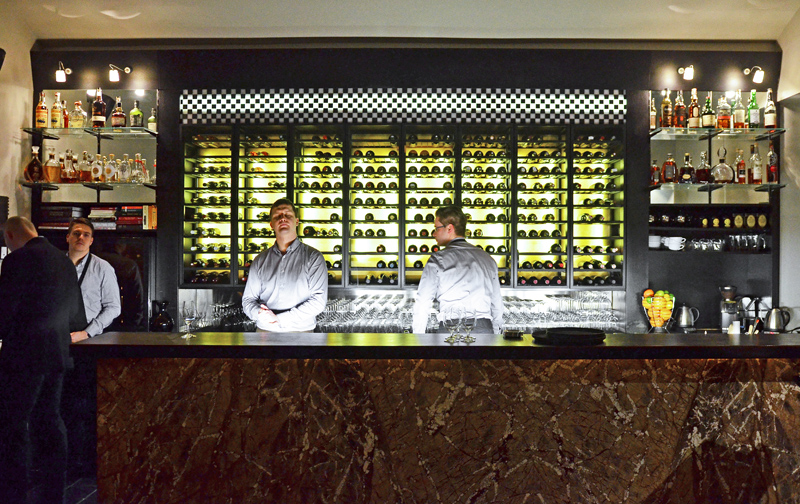 The first amuse bouche arrives: a fermented radish wrapped in lardo. I wouldn’t eat a bowl of them, but the pronounced acidic and salty tastes are a good way to prepare your palate for the meal. 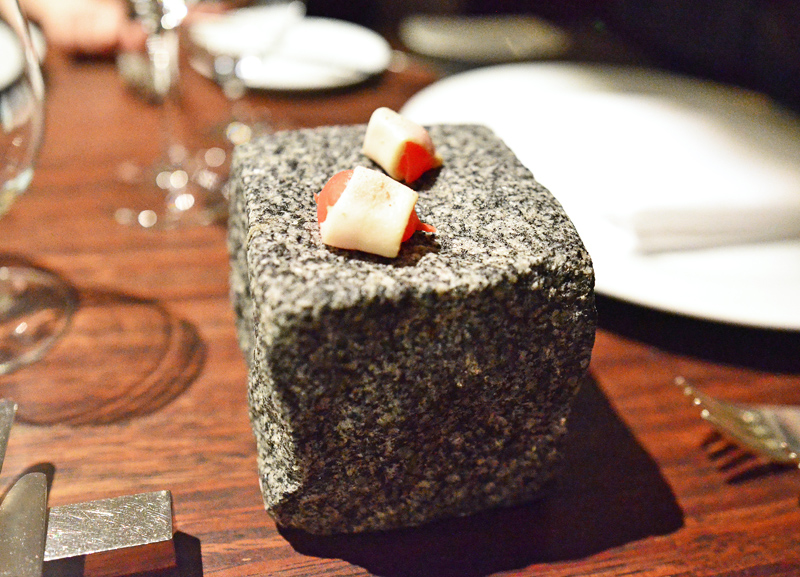 Next comes a trio of amuse-bouches, already offering more subtlety and a glimpse at some of the flavors that we’ll find in subsequent dishes. The very crispy, salty catfish skin, topped with a green dill and lemon mayo, is my favorite of the lot. The pancake (which may or may not be plain) is covered with horseradish cream, chives, and some other herbs. The golden sunchoke crackers sandwich a spoonful of duck confit. All three are quite nice. Again, the thing about most amuse-bouches — not just here but generally — is that I wouldn’t order a whole plate of them, but they’re good at bite-size. 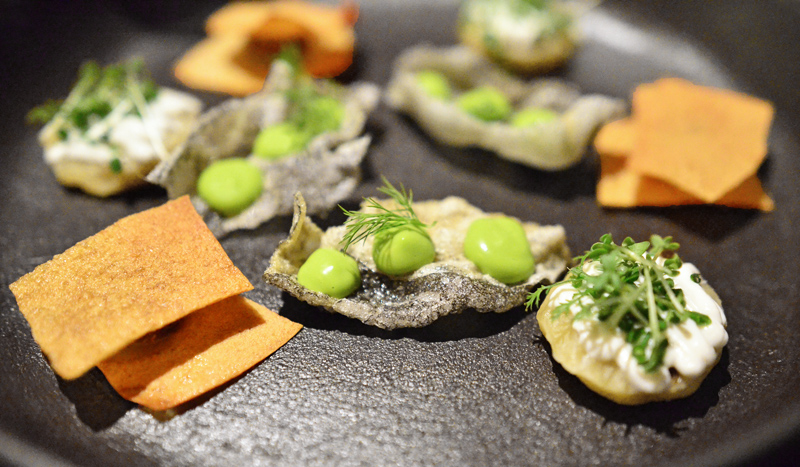 Another amuse-bouche, and hey, it contradicts the observation I just made! This time, it’s a tiny beef tartare between two pieces of crispy bread toasted in butter. A Czech classic at any portion size. Even if it’s very tasty, maybe this is one too many amuse-bouche? 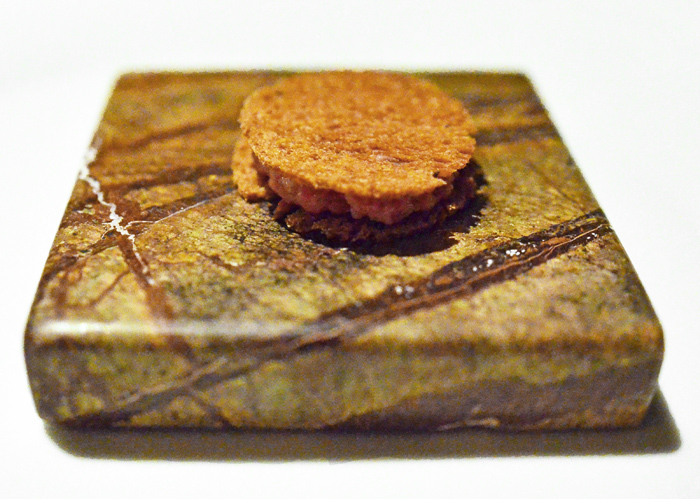 First course: snails, garlic, leek, walnuts. The snails come from the Lusatian Mountains, we are told. Are some soils more suitable for snail farming? Who knows… It’s an appetizer with a lot going on, a little bit sweet, overall quite good. The snails are very tender, but I’d have trouble identifying all the remaining ingredients — I guess austere dish naming is good for something, after all.

Juice pairing: apple-leek. Essentially a leek juice with a bit of apple in it, this will end up being my least favorite. 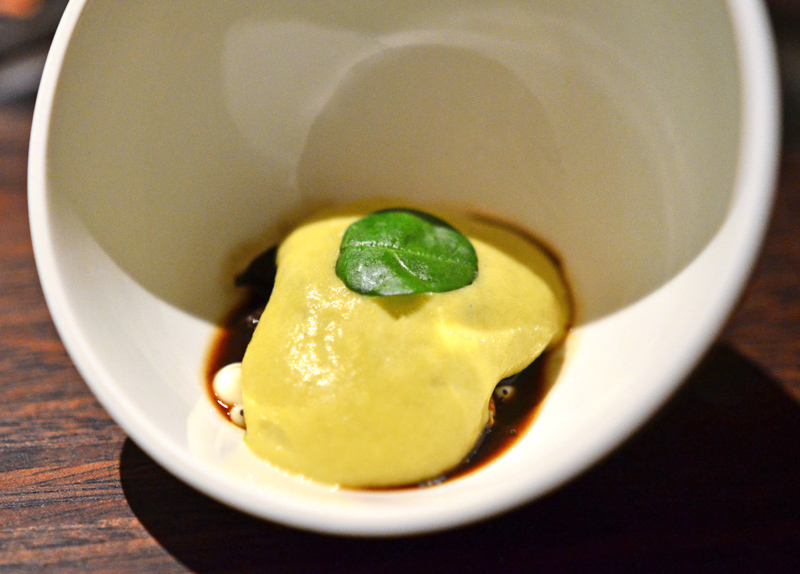 Second course: pumpkin, Prague ham, whipped cream. The question that comes to mind is, what happened to the Prague ham? Wasn’t I supposed to get a plump pork shank on my plate? The ham’s actually used to flavor the whipped cream, a great trick. The soup boasts a fragrant pumpkin taste without being too sweet (some recipes add liberal amounts of honey). Simple but excellent. The flavors are closer to one’s stereotypes of Central European cuisine, but the vehicle is original.

Juice pairing: apple-elderflower. This is definitely more familiar territory, especially for European palates. The nose is very floral but the taste is mostly apple. 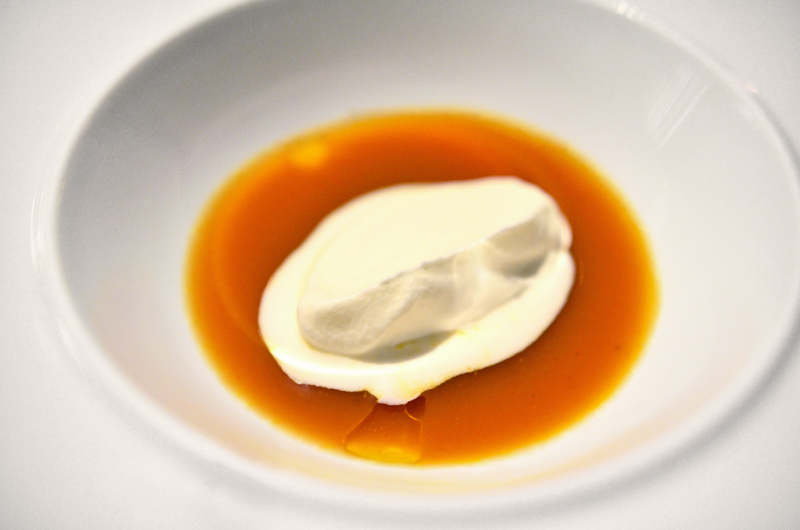 Third course: catfish, yeast, radish. Yeast, that’s interesting. I forgot to take a picture, but thanks to fellow bloggers and instagrammers, I can tell you the dish looks something like this or this. The catfish comes from Třeboň, a region rich in lakes and rivers. Sadly, whether it comes from Třeboň or a farm in China, catfish still isn’t my favorite fish by a long shot — it just doesn’t have a lot of flavor. I love the very sweet yeast broth, which tastes like bread (duh), although it’s a bit too sweet and concentrated to eat on its own once the fish is finished. Yeast broth is an idea I’ll keep in mind for my own recipes. The thinly sliced black radish and raw Brussels sprouts pair pretty well with the rest.

Juice pairing: broccoli-rhubarb. Tastes weird on its own, but goes really well with the food.

Fourth course: shallot, pear, lard. The shallots — some grilled, some pickled — are mixed with pieces of dried pear and lardo, and served in a wine reduction, creating a variety of textures. Did Marie Svobodová really advocate the use of tapioca pearls? I don’t. They’re pretty, but I’ve never understood what they’re supposed to bring (yeah, yeah, that chewy texture). Nevertheless, the dish is very pleasant and the number of elements involved makes it more complex than it seems. This is also the most visually appealing so far, in person, as the pieces of shallots cut into various shapes add height to the composition.

Juice pairing:  sea-buckthorn-thyme. The taste is light on sea-buckthorn and strong on thyme: a good choice with the dish. 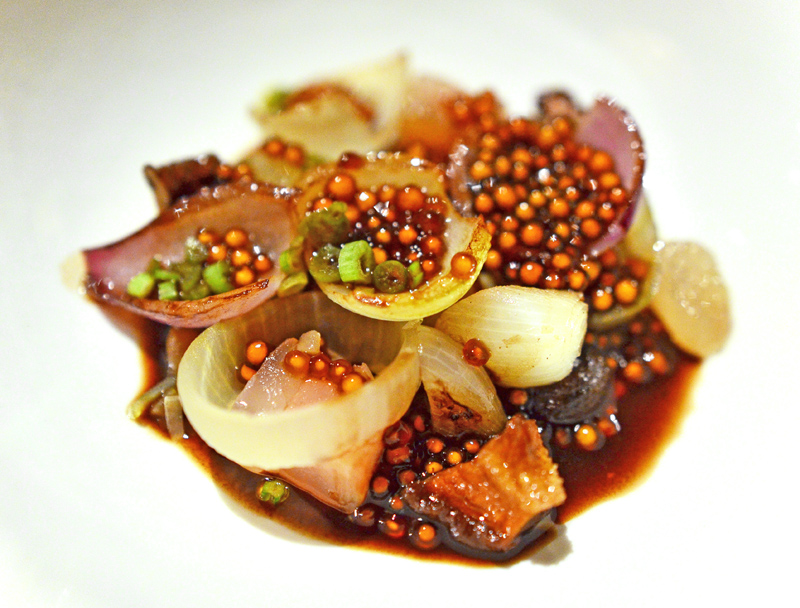 Fifth course: chicken, barley, horseradish. And a few other things, too. The bird hails from Štěpánovsko, in the town of Týniště nad Orlicí. Once again, I would be hard-pressed to explain what makes this little town a Mecca of avian excellence, but the breast is extremely tender, beautifully cooked — most likely sous-vide — then lightly smoked. The barley garnish is worth remembering: the ultra-tender barley is mixed with garlic, something green, popcorn, and caramelized cornflakes. Like many of the other courses, the plate is finished table-side, with the waiter sprinkling horseradish-buttermilk snow that rapidly melts on the chicken and barley. A truly excellent re-interpretation of Czech traditional elements: smoked meats, barley, horseradish…

Juice pairing: plums. Yes, with an s. It’s thin but very rich, almost oxidized, very wine-like. While oxidation destroys the complexity of good wines, I find that when it’s applied to plum juice, the result’s a lot more interesting. I want to learn how to make that! 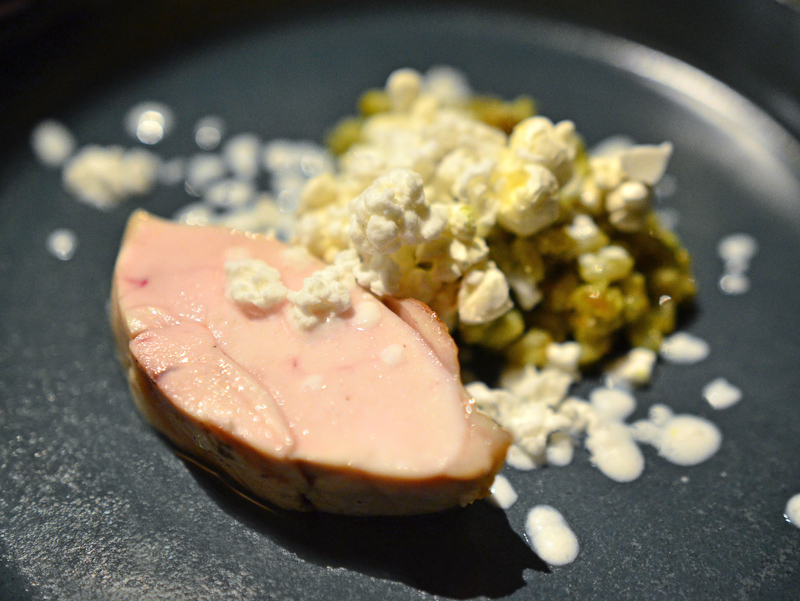 After all these courses, it’s time for a dessert amuse-bouche: a Christmas cookie. Vanilkové rohlíčky are traditional crescent shaped good-luck cookies. The texture reminds me of a sablé, but less dense. I don’t see a lot of re-interpretation here, but my daughter loves these because “they’re sweet.” 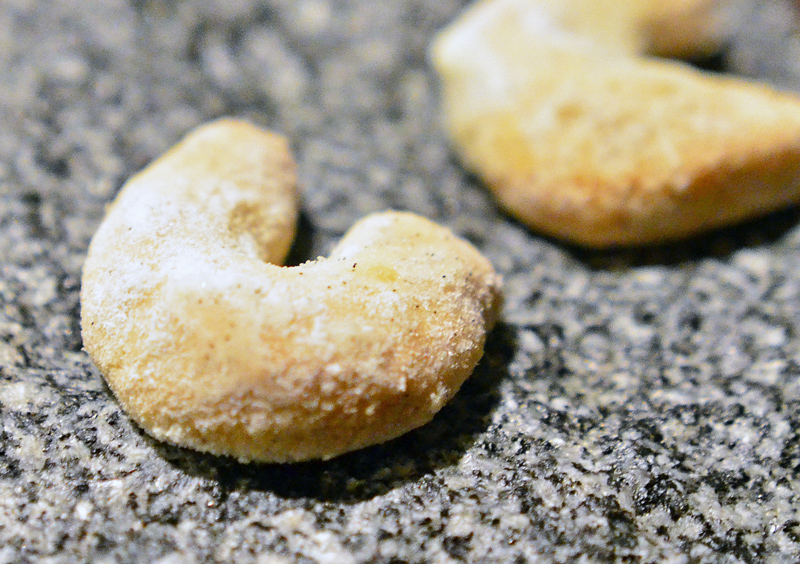 Sixth course: olomoucké tvarůžky, garlic, cracklings, mustard. Olomoucké tvarůžky is usually a yellowish, pungent soft cheese made from skim cow’s milk — and we’ll encounter it again soon in another post. At LDBB, the very cold, crumbled cheese is a bit salty but much more approachable. There are also some smoky elements (the cracklings?), mustard (though it doesn’t overpower the rest), and some type of garlic granules, which all contribute to a pleasant texture with a lot of crunch. At the risk of sounding repetitive, this is the kind of combination of traditional flavors and modern preparations that successfully illustrates the chef’s philosophy.

Juice pairing: red currant, but I have no memory of it… 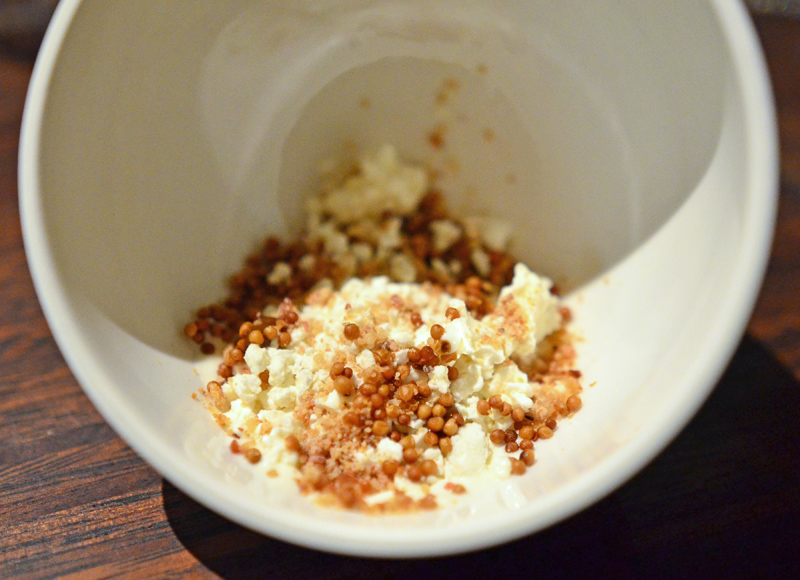 We finish the meal with some colorful mini “sponge cakes”. Their crunchiness makes me think of some kind of airy cookie sandwiches, a bit like macarons. And texture-wise I would have preferred actual macarons! The buckwheat flour in the batter tastes great, and the flavors are all satisfyingly intense: sea-buckthorn, walnut, and beet.

We’re out of grown-up juice pairings, but my daughter’s freshly pressed apple juice is probably the best I’ve ever had. She doesn’t seem to agree, but what does she know… 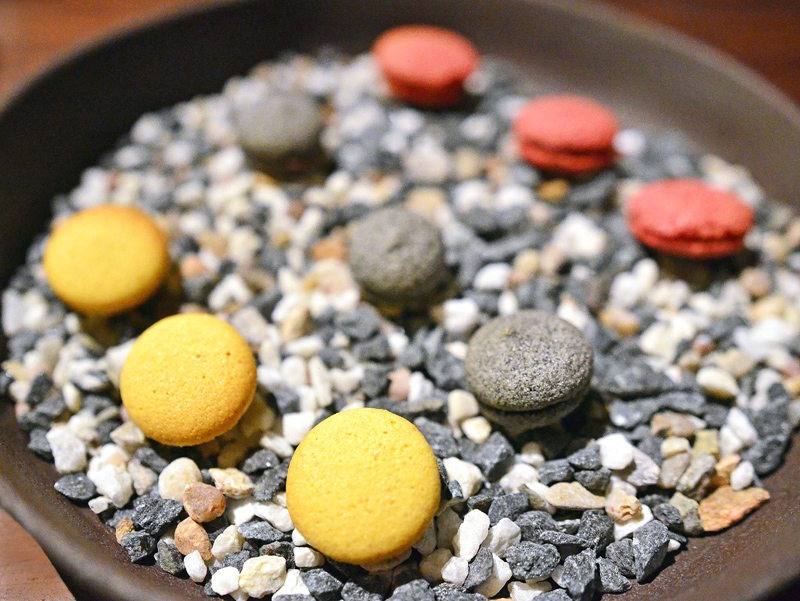 For the record, some of the extra dishes they’re making for the 11-course marathon are: “sturgeon caviar, cauliflower”, “mushrooms, broccoli, pearl barley, marjoram”, and “celery root, straw, truffle”.

If I recall correctly, the wine pairing is 100% Czech and 100% white (except for dark beer with the dessert). This is a bit surprising and disappointing, even though I hear that Czech whites are better than Czech reds. The food doesn’t really require red, but the sommelier could certainly make it work with some dishes, like the chicken. Some of the wines are interesting, such as the 2011 Valihrach Sauvignon Gris or the 2010 František Mádl Sauvignon Barrique. Others, such as a Gruner Vertliner and a Riesling, are fine but nothing special. 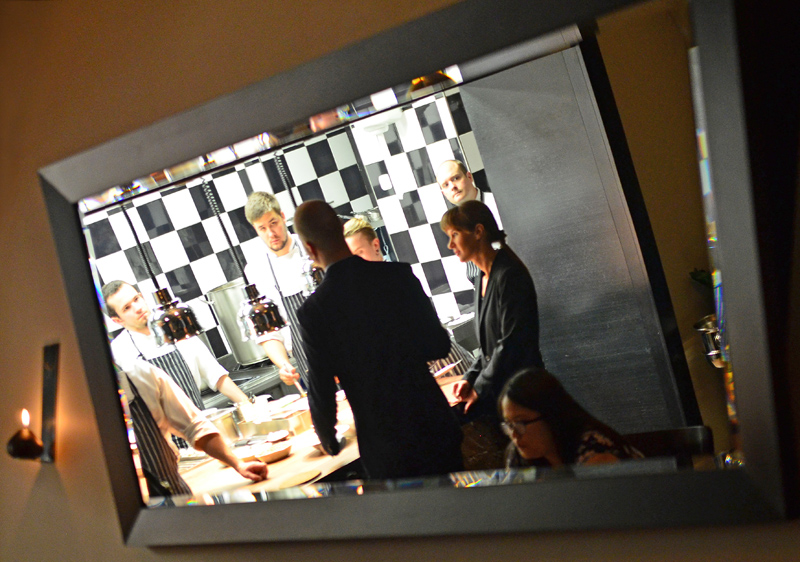 Not everything’s perfect at La Degustation Bohême Bourgeoise, of course. The snail course is a little too complicated for its own good. And I’d be happier if the catfish was replaced with trout, and the chicken with duck (paired with a Czech red wine). But hey, I’m not the chef here.

Overall, the restaurant stays true to its mission, and it pays off. The dishes manage to be creative while still referring to traditional Czech elements, something I admire. For what it’s worth, they’ve earned that Michelin star.