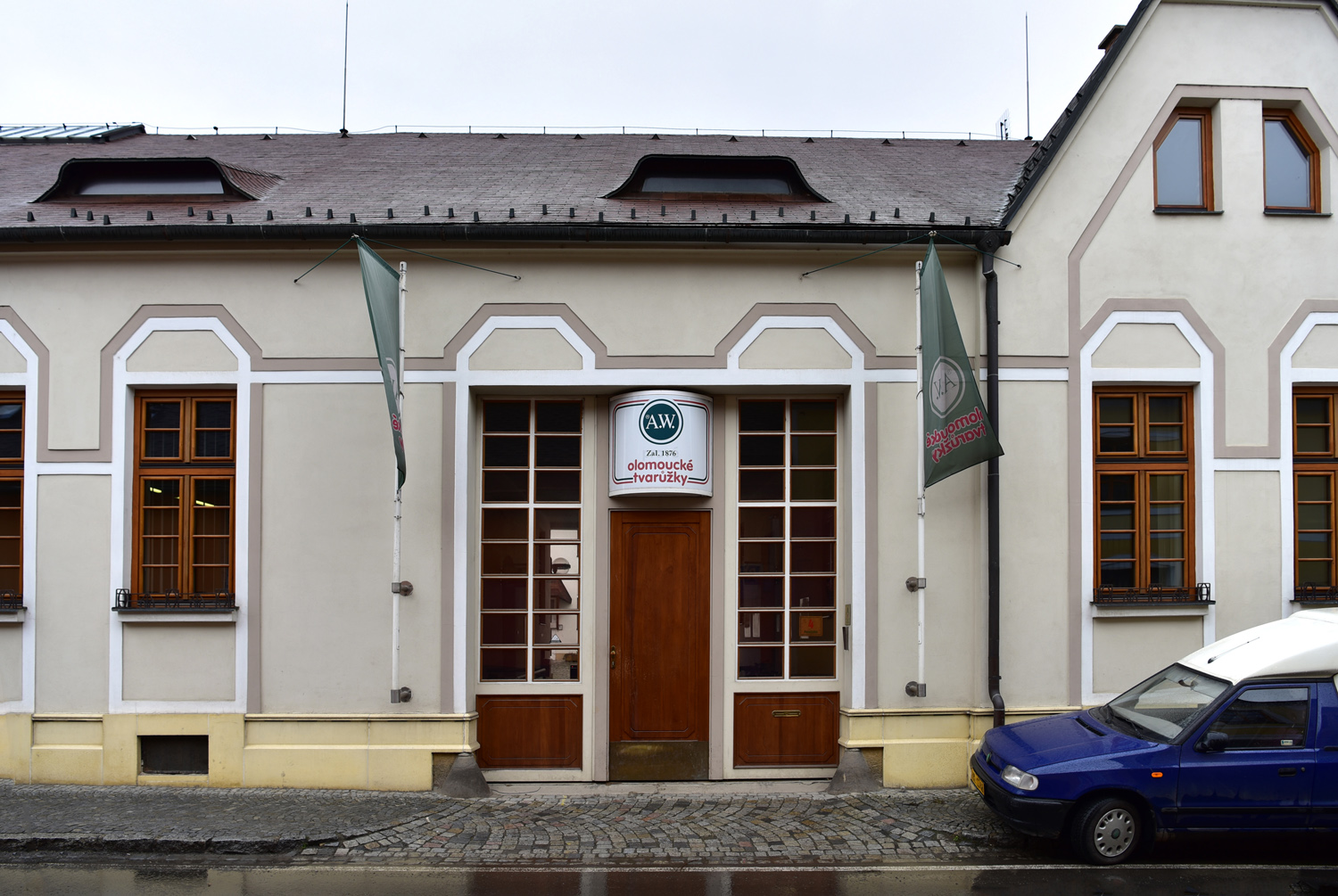 Olomoucké tvarůžky, aka Olomouc cheeses, aren’t just any little ripened soft cheeses. With their strong scent, distinctive pungent taste, and yellowish color, they have right of place in the world pantheon of gastronomical stinky cheeses. My first encounter with them was rather gentle: at La Dégustation Bohême Bourgeoise, a mild, young exemplar was crumbled and combined with garlic, cracklings, and mustard to form a very approachable dish. But then a meal at Lokál let me fully appreciate the tvarůžky in all their ripe yellow glory. The small discs of cheese felt super salty, rubbery, and terribly pungent. I compared them to cheese rind and concluded that “while not totally inedible, it’s definitely an acquired taste”. 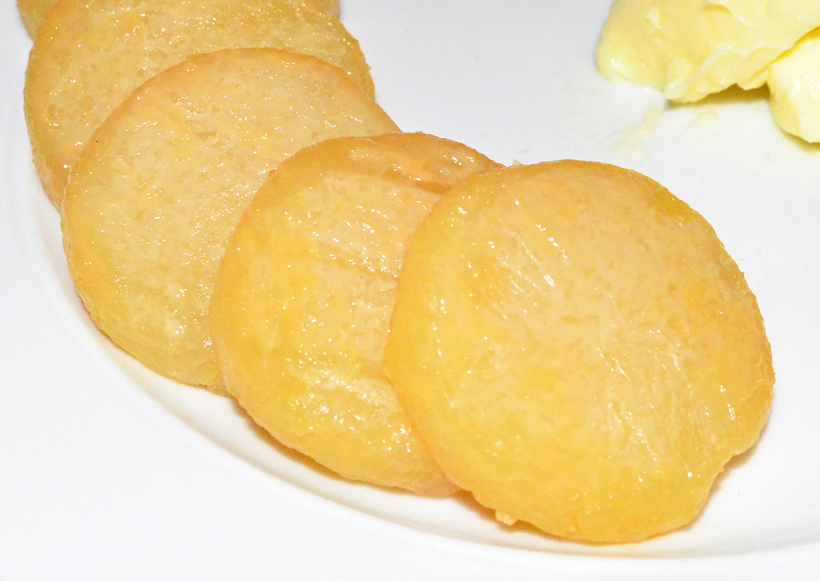 So, naturally, my journey across Moravia led me to Loštice, a little village where sits the very last commercial producer of Olomouc cheese, a visionary family that turned a handicraft into an industry thanks to its large-scale factory and bleeding-edge equipment, that survived the stinky-cheese-hating commies while other manufacturers closed one by one, that not only continues the tradition, but has even opened a museum of Olomoucké tvarůžky… the A.W. Company. 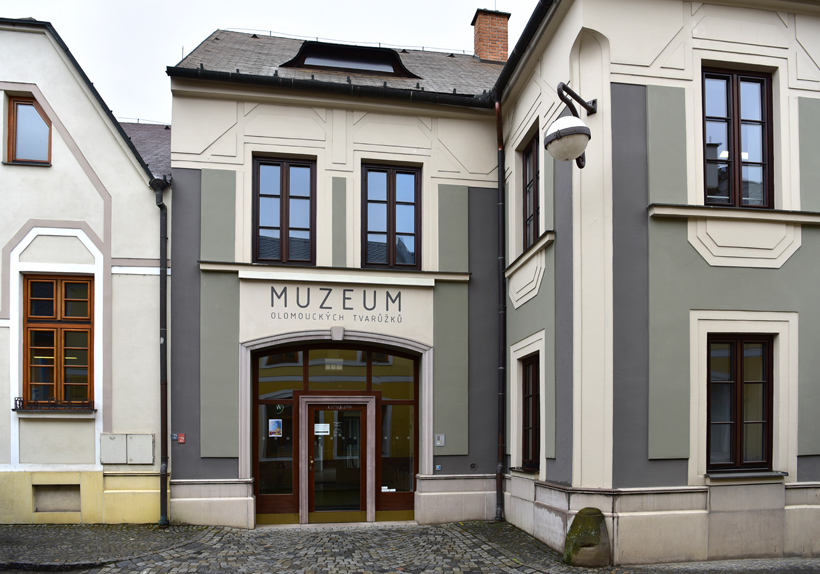 A. W. stands for Alois Wessels, the man who really took the family business to the next level. But let’s step back a bit…

Olomouc cheese comes into existence much earlier, and the name tvarůžky (literally, “little quark things”) appears for the first time on an estate list from Olomouc in 1583. While the cheese is actually produced in surrounding villages, the Olomouc market becomes its trading hub. There, farmers sell their curds to cheese makers, and merchants buy the finished cheeses to sell them elsewhere, in other towns, where they subsequently become known as Olomoucké tvarůžky (they’re also sometimes called olomoucké syrečky, i.e. “Olomouc little cheeses”).

In the second half of the 19th century, the industrial revolution changes the Moravian economic landscape, with machines complementing hands-on production, and locomotives replacing carts for transportation. The railways that span across Europe open new markets for Olomouc cheese, and it wins an important award at the 1873 Vienna World’s Fair. It’s the Golden Age of tvarůžky. 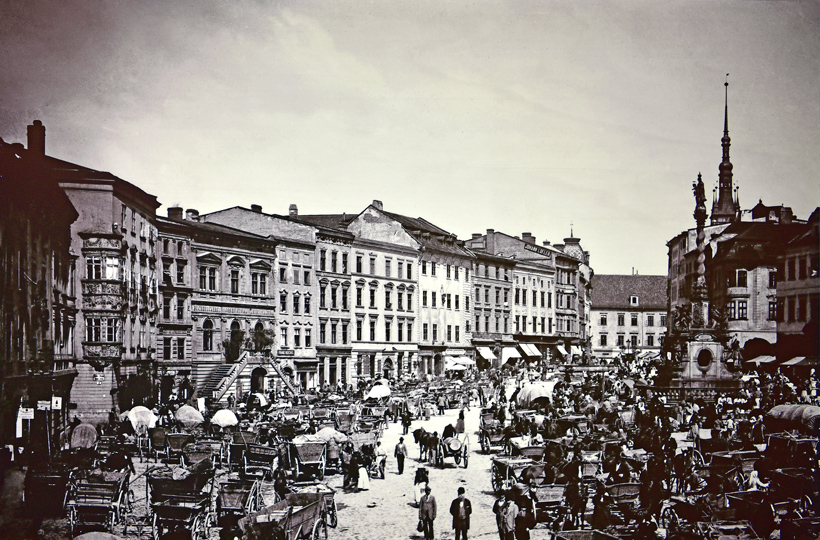 In this context, Josef Wessels begins to produce the cheese in 1876. Cheesemaking, we are told, “was just another of his many trades”. While details about this time are pretty scarce at the museum, things change when his son Alois takes over in 1898. Intent on improving production, Alois transforms the family business into a modern factory. And he’s got plenty of original ideas, such as reusing whey to make hand cream or eau de toilette (both of which fail). He even corresponds with Thomas Edison seeking feedback on his inventions: “I worked out a draft of a modern molding machine that is fully automated thanks to electricity and I think that two or three runs through this mill can result in the required quality,” he writes to Edison in 1911, a couple years after electricity arrived in Loštice. Before the First World War breaks out, he is one the leading manufacturers of tvarůžky. 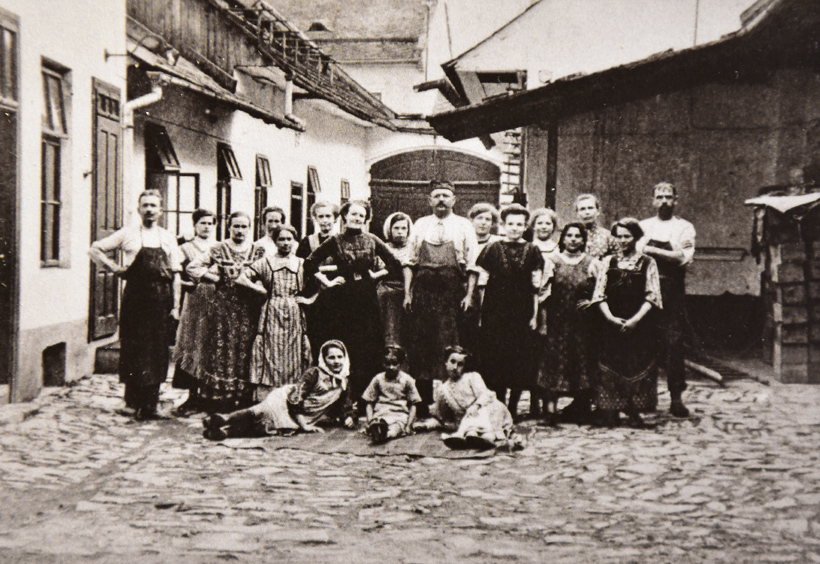 Alois Wessels and His Employees in Loštice, 1909

In 1917, Alois’s daughter Francisca and her husband Karel Pivný (who used to sell machinery to the cheese company) take over the business, and continue mechanizing the production. In 1924, Pivný starts experimenting with machine forming. More modernization and expansion follow, and the couple runs the enterprise as a state-of-the-art cheese factory until 1948.

As is often the case in Czech Republic, the museum keeps rather quiet about the communist era. But it’s safe to say that during this time, all factories are nationalized and regrouped into various state companies. Exportation of tvarůžky pretty much stops, production declines, technology stagnates, product variety is reduced to round shapes and cheese bits. Many of the factories close, and the former Wessels company eventually becomes the last remaining maker of Olomouc cheese. 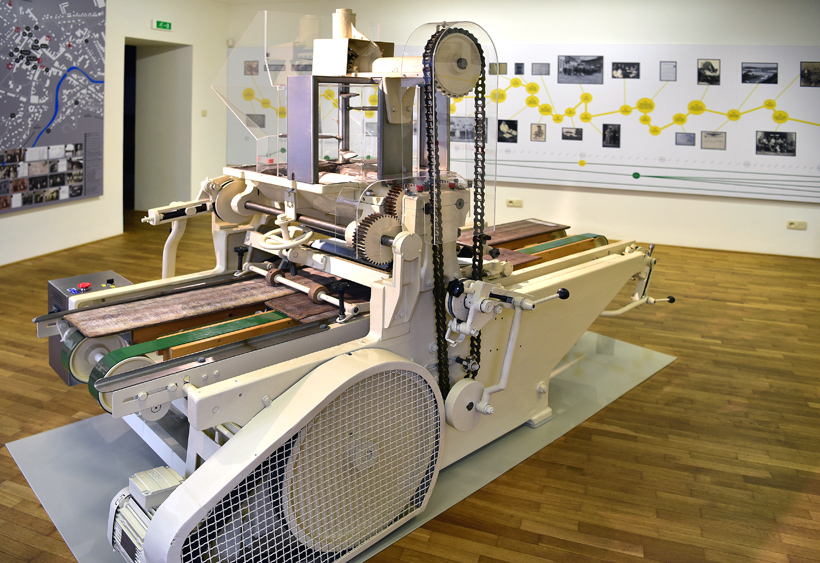 Cheese Forming Machine from the 1950’s

After 1990, the factory is returned to the successors of Francisca and Karel Pivný, who refurbish the plant completely and bring the technology to a level worthy of their ancestor Alois’s vision. Nowadays, Olomoucké tvarůžky are registered as a Protected Geographical Indication by the European Union, and have their own festival in Olomouc in the spring.

The production of Olomoucké tvarůžky starts with skimmed cow’s milk. The factory prides itself in making a very natural product, without adding rennet, colorings, flavorings or stabilizers. It also contains only 0.6% of fat (but then people eat it with butter…).

Let’s first take a look at the simpler traditional fabrication process, pre-industrial revolution. The soured milk was warmed up to make it curdle — this produced tvaroh, or quark. This quark was bought at markets or dairy farms by the cheese makers, who transported it in barrels. It was then kneaded by hand or foot, until curd mills were invented. This was hard work. 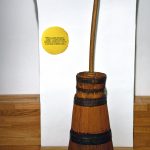 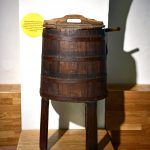 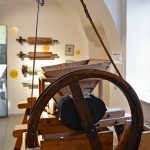 Once the whey was thus separated from the solids, cheese makers pressed the curds between their palms to form little discs. Later on, wooden clappers like the one below were invented, adding a little bit of regularity to the shape of the final product. The cheeses were then dried on racks, before being washed and finally stored in crates for maturation in the cellar. 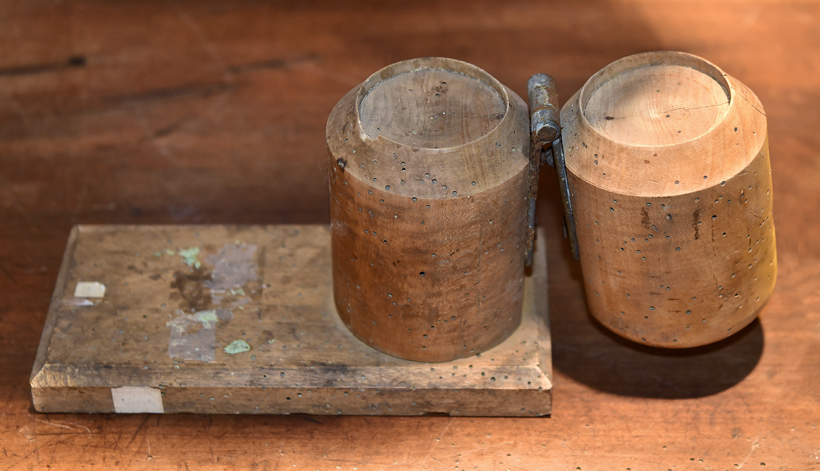 Then came the machine age, and here’s what today’s method looks like, if I understand correctly. The curds are initially crushed with salt and left for two weeks without any access to air (I suppose this guarantees maximum whey extraction while preventing the development of fungus). After this time, they’re mixed with milk cultures and milled again. They’re now ready to go through the molding machine, which produces round cakes, rings, sticks, or small pieces, as tvarůžky now exist in many shapes. The cheeses are transferred to stainless steel racks, where they ripen in a temperature-controlled environment. After a rinse of lukewarm water, the second ripening stage follows: as the cheeses are stored in cases at a constant temperature, the surface culture begins forming. Lastly, the cheese is packaged in a specifically permeable foil that allows ripening while preventing desiccation, and the the final maturing is achieved during storage and transport to retail stores. 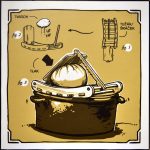 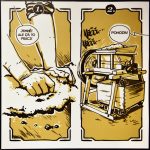 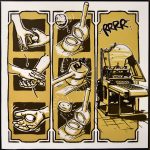 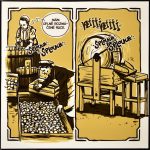 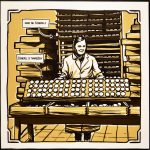 Olomoucké tvarůžky can be eaten on their own, or with bread and butter. But there are plenty of other wonderful things your can prepare with them, from appetizers to desserts. Yes, this includes pizza. No, I don’t have any cocktail recipes. 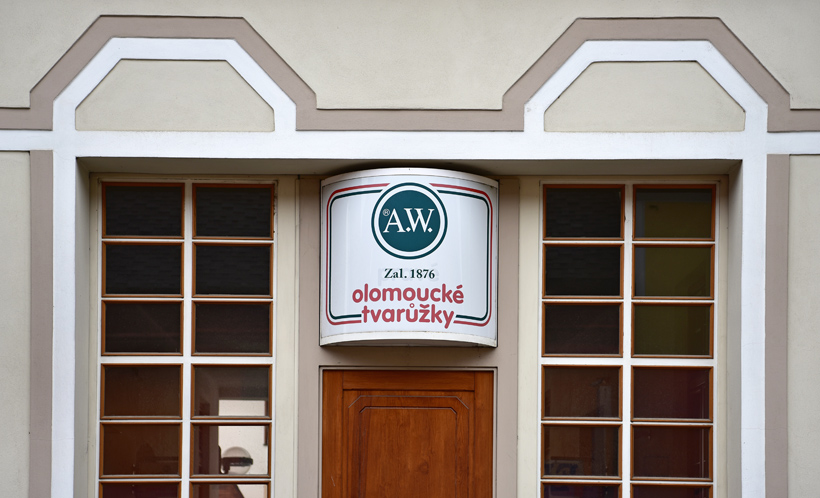 How does this cheese look like in the inside? Somehow it reminds me of the “Harzer” from Germany https://en.wikipedia.org/wiki/Harzer

Patience, everything will be revealed soon!

where to buy olomoucke cheese in the United
states of America??????

Sadly, nowhere that I know if 🙁