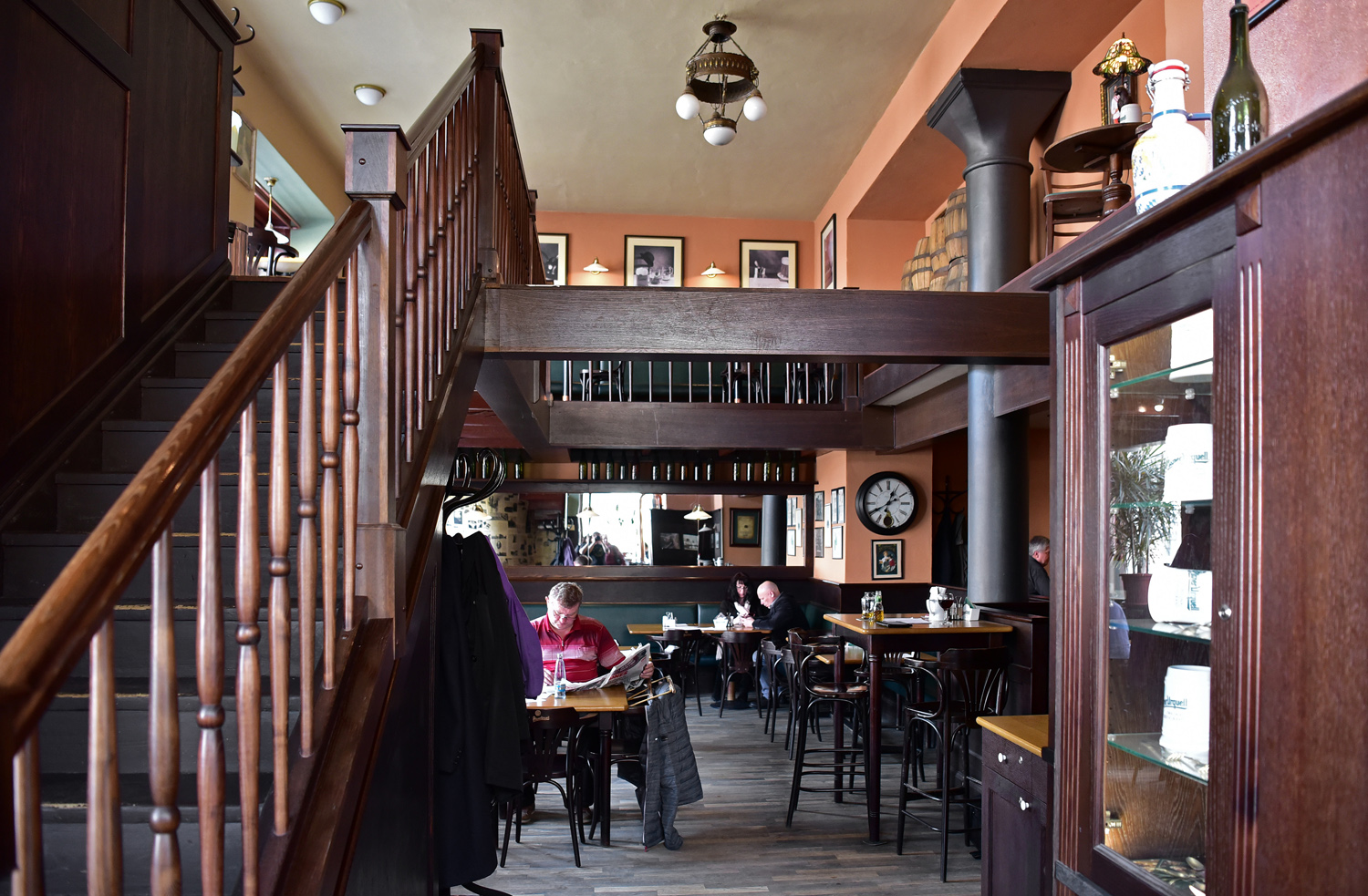 Having learned nearly everything there is to know about Olomouc cheese, we’ll now focus on the city of Olomouc itself. The historical capital of Moravia and the center of the Haná region, Olomouc feels much larger than it actually is (the current population is only around 100,000 inhabitants). The majestic main square and the city center’s many historic buildings make it an awesome touristic destination, but tourists have mostly overlooked Olomouc so far. And with many local restaurants and pubs, this isn’t a bad place to try regional cuisine.

So let’s be the model tourists that the city wishes it had more of, and start with the uncomplicatedly named Moravská Restaurace, Moravian Restaurant, an establishment with rustic traditional decor located right on the main square. Past the appetizers, which a waiter will promptly present to you on a tray right after you sit down, the menu is divided into traditional dishes and grilled meats, plus a few soups, salads, and fish dishes. Here are a few things that caught my attention: roast duck, red cabbage, apple, bread and potato dumplings; goose liver in port wine with almonds and apple (as a hot main course); the inevitable schnitzels (veal or pork); fried chicken breast stuffed with bacon and (what else?) Olomouc cheese; grilled wild boar sirloin slices with rosehip sauce; grilled venison (saddle steak with juniper berries, medallion with cranberry sauce); trout on black risotto (Czechia meets Croatia); pike-perch fillet with garlic butter. The Chef also recommends three dishes (does he not recommend that we try the rest of his food?): a rabbit leg with mustard and potatoes, a grilled veal steak with mushroom ragu, and grilled quail breasts with cranberry butter. 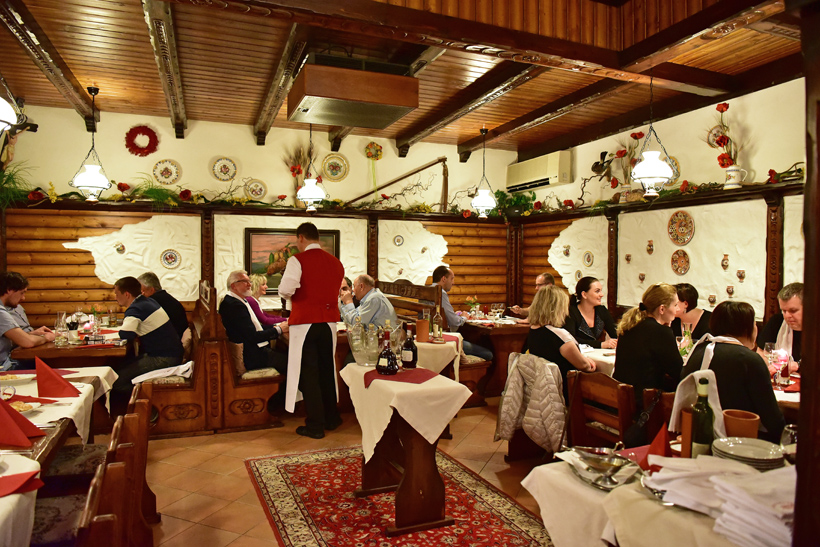 Let’s start with the cold appetizer tray, offering pâtés, duck, deer, and smoked salmon. The foie gras pâté is more livery and less fatty than its typical French cousin, but it’s pretty tasty this way too. It comes with a sweet cherry sauce. The lightly smoked venison saddle looks and tastes more like the deer version of roast beef to me: thin, tender slices of mild, bright red meat, served with a very sweet cranberry sauce. Some puff pasty sticks with caraway seeds replace the usual bread on the tables. 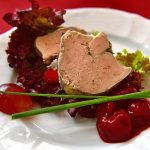 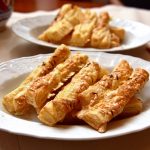 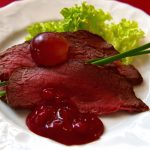 The grilled veal steak with mushroom ragu, one of the Chef’s recommendations, consists of a thick piece of veal, tender and flavorful, that did arrive almost medium rare as I ordered it — a rarity in this part of the world. The excellent mushroom stew seems to contain a lot of porcini, simmered in a white wine and cream sauce. 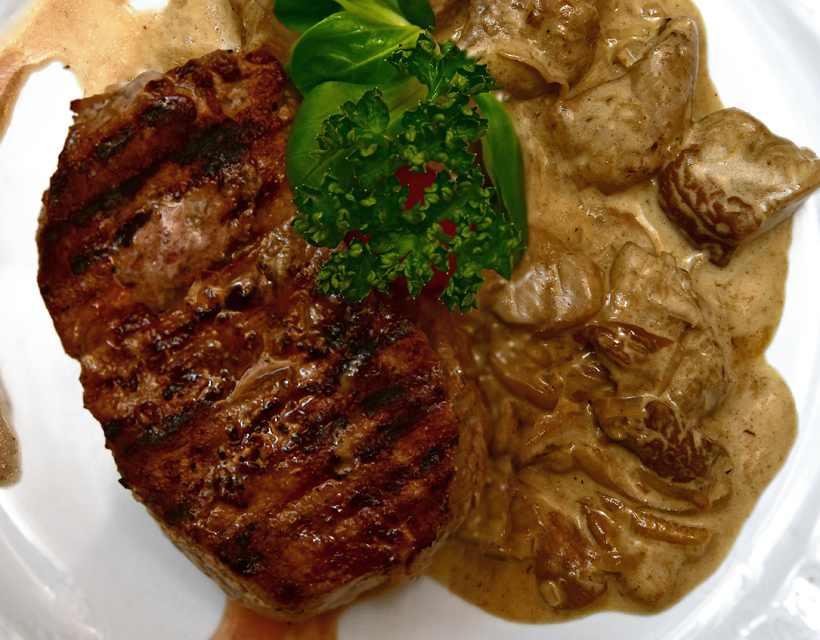 The chanterelles with cream and dill sauce are kind of another take on the idea of a mushroom stew. It’s interesting to list this as a full dish, as it’s essentially a bowl of sauce that comes with run-of-the-mill bread dumpling slices to eat with it. Regardless, it’s very good, and dill goes very well with chanterelles. The hard-boiled quail eggs on top are cute. 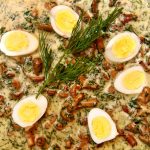 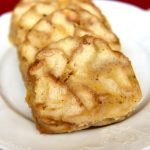 Moving on to a place that’s a bit more authentic, i.e., populated with locals, try Moritz (which shares a name with an important cathedral less than 10 minutes away). This is a restaurant cum micro-brewery with a First Republic interior. A whole portion of the menu is dedicated to beer snacks, which means we’re not ready to leave the stinky cheeses behind us quite yet. You can have your tvarůžky plain with bread and butter, marinated in beer, or as a tartare (more on this later). Other snacks include a cured meat platter from the Haná region, head cheese (plain, fried, or in a salad — I guess they must really love it!), chicken pâté, smoked beef tongue, beef tartare, roast beef, and pickled herring. The rest of the menu is main courses, plus again a few soups and salads (the salads relegated to the very end of the menu, as something nobody in their right mind would order), and Olomouc cheese makes a couple more appearances here. Expect Haná česnečka (garlic soup) with Olomouc cheese, grilled meats (sausages, chicken, steak), schnitzel, pork any way you want it (on skewers, roasted, as a schnitzel with extra bacon, in the smoked pork tail XXL, or in pub-favorite crispy pork knuckle), goulash with potato pancakes, fried goose liver, grilled hermelín (a camembert-like Czech cheese) with onions and bacon, and last but certainly not least the “fried gourmet maxi plate” (lamb, pork, chicken, tvarůžky, hermelín and Edam cheese). Don’t want meat? Consider the pan-fried trout or some grilled vegetables — or be a salad pariah. There are some interesting dishes that need to be ordered 24 hours ahead as well: a goose šoulet (a kind of Czech cholent, a mix of peas and groats with goose breast or leg, baked in the oven), or a classic roast duck with beer, red and white cabbage, potato, and bread dumplings). 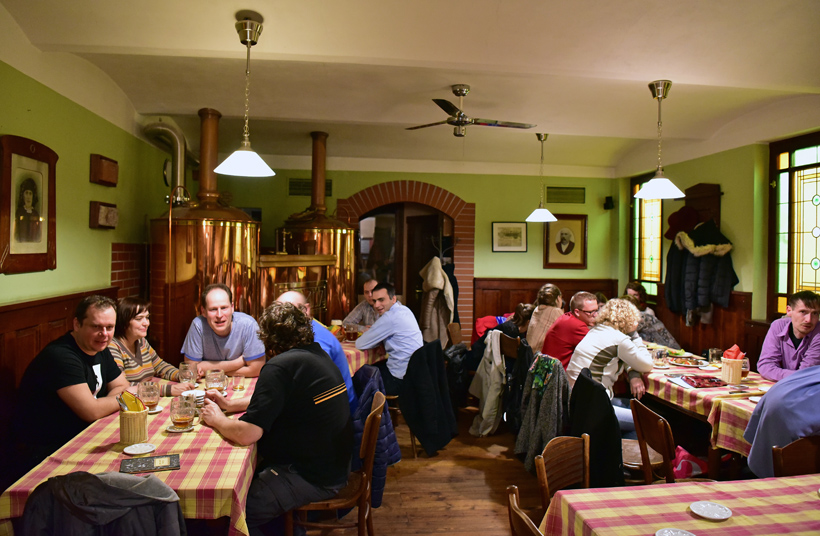 The Olomouc Cheese tartare is similar to a beef tartare, but the ground meat is replaced with crumbled tvarůžky. It’s mixed with finely chopped red onion, minced garlic, red pepper, and parsley, and the shiny spots in my photo make me wonder if there isn’t a little bit of oil too. This is a totally accessible tvarůžky dish: pungent but not over the top, with bold flavors for sure, but a quite enjoyable taste. It also goes great spread over a slice of bread toasted in butter (another classic Czech beef tartare accompaniment, just without the raw garlic for some reason). An interesting and successful idea. 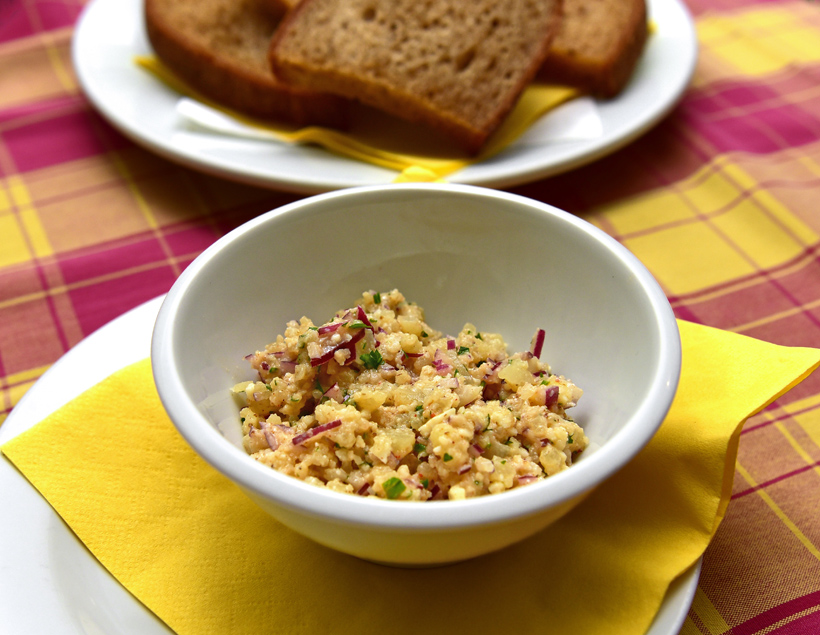 The brewpub goulash, another pub staple, exhibits a clear effort in the presentation, compared to the indistinct mass of meat stew that goulash so often is. The meat here is garnished with very thinly sliced raw onion, grated fresh horseradish, a mild pickled green pepper and a slightly spicier pickled red pepper. The cubes of beef are tender and very flavorful, and there’s also a piece of Czech sausage. The thick and smooth sauce tastes like beef stock and a bit of paprika. This very good dish comes with potato pancakes (which unfortunately contain way too much garlic). 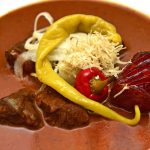 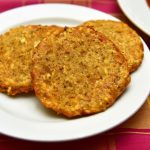 On the beverage front, there’s of course the famous Moritz beer (“our own live, unfiltered Moritz beer directly from the tank”). I also notice the Green Tree absinthe and Starorežná.

Finally, still in the atmospheric beer pub category, we pay a visit to Drápal, a “Pilsner Urquell Original Restaurant” (Apparently, this signifies a seal of approval that Pilsner Urquell gives to restaurants that offer “traditional Czech and modern gastronomy”, “an unforgettable environment”, and beer — Pilsner Urquell, obviously — straight from the tank). Now, here’s an interesting story… The menu on the table was very short, which didn’t really bother us since we were just planning to have a small lunch. What I realized much later on, though, is that this was only a list of the day’s specials, and there should have been another full menu (it’s on their web site). So either our caring waiter didn’t bother bringing it to us, or the chef decided to radically simplify his job… 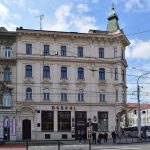 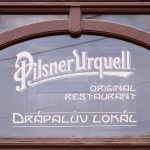 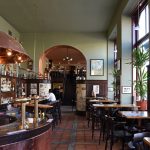 In any case, that full menu reads like the contents of a textbook on the region’s specialties and of the broader Czech cuisine: Prague ham, beef tartare, goose liver pâté, Olomouc cheese with bread and butter, cured meat and cheese platter, Haná česnečka (garlic soup with ham, egg, and cheese), beef goulash, Spanish bird and Moravian sparrow (more on these later), smoked pork knee, beef and pork steaks, pork schnitzel (with or without Olomouc cheese and bacon)… From what I can see, the “modern gastronomy” part means a couple of spaghetti dishes, grilled chicken breast, and grilled salmon. Drápal also wins the Palme d’Or for most hilarious vegetarian section, which consists of two dishes: fried cheese and fried Olomouc cheese (for real). To be fair, there are a few more undeclared vegetarian options in the salad section. As for my much shorter daily menu, I remember seeing: fried hermelín with potatoes and tartar sauce, boiled beef top round with tomato sauce and bread dumplings, and the Spanish bird, repeated from the regular menu for some reason.

So what it is this Spanish bird, exactly? Called španělský ptáček in Czech, it’s a braised beef roulade, wrapping a bizarre combination of smoked sausage, bacon, hard-boiled egg, and gherkin. I’ll keep the history of the dish for another time, as I think there is potential for an interesting recipe post here. And the Moravian sparrow? Despite their both using toponyms and bird themes, the Moravian sparrow (moravský vrabec in Czech) has nothing to do with the Spanish bird. No, the former isn’t a poor man’s version of the latter — it consists of roasted pork, cabbage and dumplings (specifically red cabbage, bacon, and bread dumplings at Drápal), which makes it very similar to a vepřo-knedlo-zelo.

Back to our Spanish bird, the way Drápal serves it — the only dish we’ll talk about, on account of that little menu incident. They sure could make an effort on the plating, but it’s a pretty good dish nonetheless. The hard-boiled egg and the pickles worried me at first, but they work quite well. The braised meat is tender, and I like the added smokiness from the sausage and fattiness from the bacon. 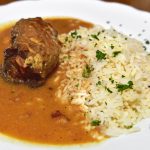 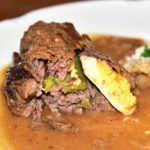 Believe it or not, in reviewing restaurant menus like I did, I feel like I learned almost as much writing this post as you must have learned reading it. Someday I will go back to Moravia. I will try the Moravian sparrow in its natural habitat, insult Drápal’s waiters in Czech until they hand me the full menu, order ahead for a whole roast duck at Moritz, try grilled hermelín, or take the “fried gourmet maxi plate” challenge. For now, though, this leg of my trip is over. Next time, we will have left Czechia for a jaunt to its former Siamese sister, Slovakia. 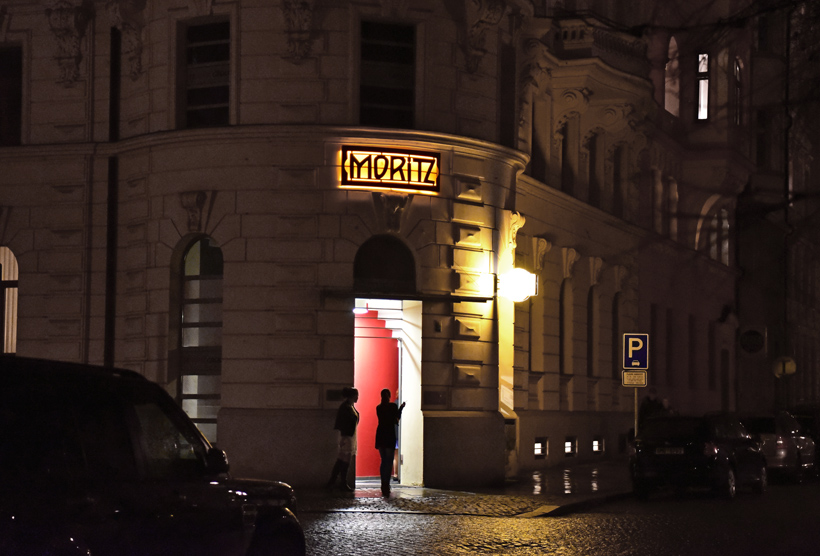