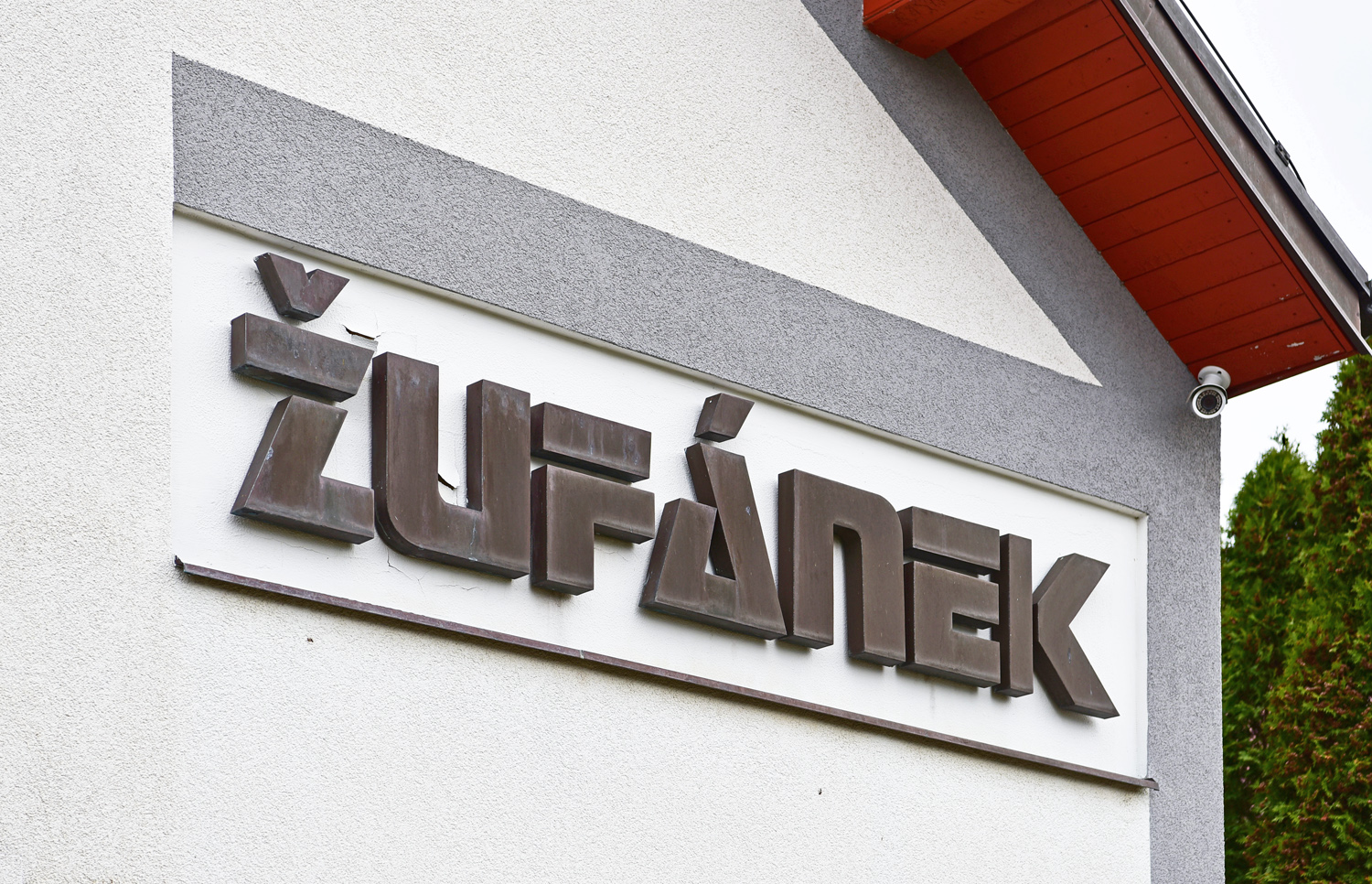 Let’s continue our visit of Moravian absinthe distilleries and head to Boršice. What, you aren’t familiar with Boršice? Population 2,255, firmly anchored in the middle of nowhere, a one-hour drive from Brno? Brno, which you may know from the cult Czech film, Boredom in Brno?

Well, you should be, because it’s the home of the Žufánek Distillery, which has quite a cult following among the Czech absinthe community, however small that community may be. Yep, my predictions were wrong again. True, it is a small fruit brandy distillery, but it isn’t a small slivovice maker who whips up some absinthe on the side to supplement his income on the backs of idiot tourists in the capital. Founded in 2000, it specializes “in processing fruit and honey to create high-quality fruit spirits, liqueurs and mead”. The whole operation is run by the Žufánek clan, husband and wife Josef and Marcela along with their three sons Martin, Josef, and Jan. Their absinthe is no tourist bait; it’s the work of Martin, a man with a passion for herbal spirits.

According to a 2014 interview on Absinthes.com, Martin’s decision to produce his own absinthe was precisely a reaction to “the damaged reputation of Czech absinthe abroad,” and the realization that his first taste of absinthe (the typical neon-colored local product, “some horrible stuff”) had nothing in common with the French and Swiss versions. In 2008, he started distilling his own absinthe, and shortly after, he launched an online forum for Czech absinthe lovers, Absinthe Mafia. He also makes other spirits using plants and seeds, such as gin (called Oh My Gin), and Kontuszówka (a liqueur containing anise, fennel, coriander, lavender, and cardamom, whose formula was adapted from several old Czech and Polish recipes).

However, at the time of my visit, I’m not yet familiar with Martin’s resume — I had simply arranged a visit after marking the distillery as a worthy stop on the road between Bratislava and Olomouc in my travel itinerary… 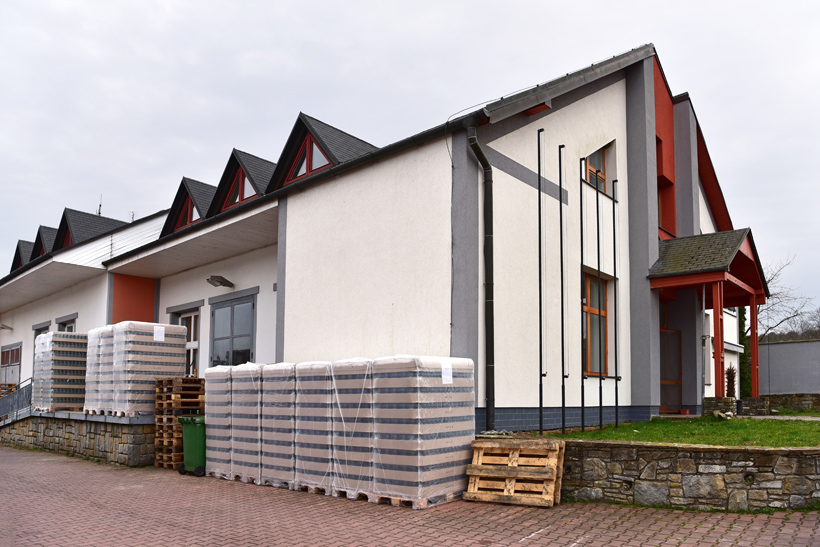 The first thing I notice as I enter the distillery is the smell of anise and other herbs macerating in high-proof alcohol in the warm still room. A nice welcome, indeed. I am told that the family distills almost every day, except for a silent season of about one month. As there’s always something distilling or just finishing being distilled, the place is always hot. There are actually two still rooms. The first, with its shiny new copper stills, is used for absinthe and gin. The green fairy being “very popular right now” (presumably as in “not totally forgotten” as opposed to “enjoyed by everyone on a daily basis”), absinthe production runs for a few months in a row, then the stills are cleaned, and gin distillation is wrapped up in just another month or so. Ironic, really: global gin consumption certainly dwarfs absinthe consumption. 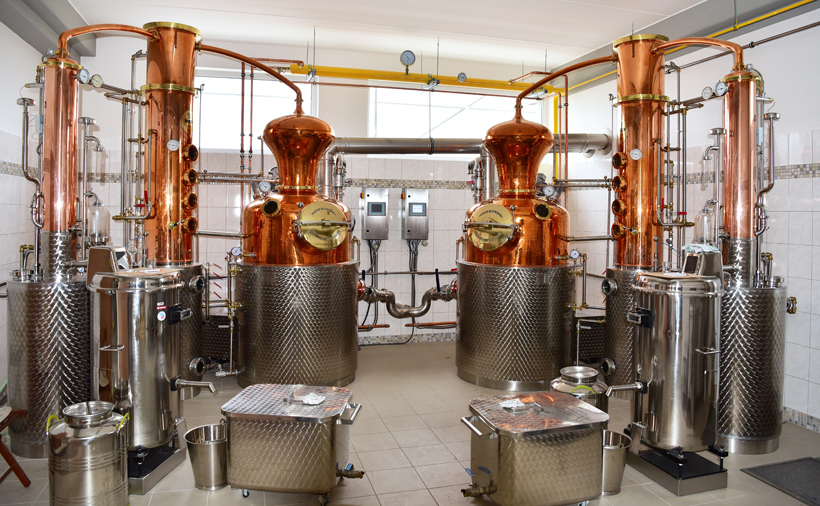 But let’s go through Žufánek’s absinthe production process. This is the traditional French / Swiss style. In the beginning there are the herbs. Žufánek grows some of them on the family’s land (pretty much all those that can possibly thrive there), buys the others once a year at harvest time, and makes his own blend (or blends, since he now makes several absinthes). The exact formula changes a bit each year, depending mainly on weather conditions during the growing season, which affect the flavor of the crops. Martin shows me the bags where he keeps the individual herbs and the blend ready for maceration. There’s absinthe’s so-called “holy trinity”, of course: absinthe wormwood (bitter Artemisia absinthium, the drink’s eponymous botanical, grown onsite), green anise (from Spain, the “best anise you can get in Europe” and the “most important herb for absinthe”, says Martin), and fennel. The other herbs I see include: Roman wormwood (Artemisia pontica — grown onsite, stems removed — which gives the drink most of its color and isn’t as bitter as absinthe wormwood; the nose reminds me a bit of sage and marjoram), lemon balm (Melissa officinalis, grown onsite, used for its color and lemon flavor), hyssop (Hyssopus officinalis, grown onsite, which gives both color and a minty aroma), coriander (from Czech Republic), angelica root (from Italy), heath speedwell (Veronica officinalis, also grown onsite), sweet flag (Acorus calamus, a very very bitter herb, allowed in Europe but banned in the USA under suspicion of being carcinogenic), and Roman camomile (Chamaemelum nobile). 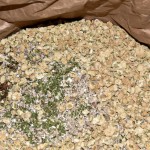 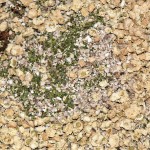 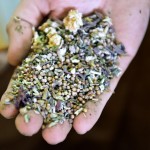 First comes the maceration. Martin starts with 85% grain alcohol — for some more upscale versions of his absinthes, he uses a mead spirit or a grape brandy instead, both made in house. Why 85%? Because the alcohol needs to be that strong to extract the aromatic oils from the herbs. Then everything goes into the still, and the herbs macerate in there for about 12 hours. The potent but pleasant aroma that results is what I smelled when I entered the distillery.

Next, Žufánek adds water to bring the alcohol content down to 25-30%, and the distillation begins. The brand new German stills, acquired in early-2016, are pot stills with a rectification column that can be bypassed. While the rectification column is necessary for fruit brandies, it’s not used for absinthe, since the starting product is already quite strong (the pot still here playing the same role as the spirit still in the production of single malt). The stills don’t even get time to cool before the next batch is poured in to macerate. Each one of them can contain 300 liters and produces about 100 liters of booze. 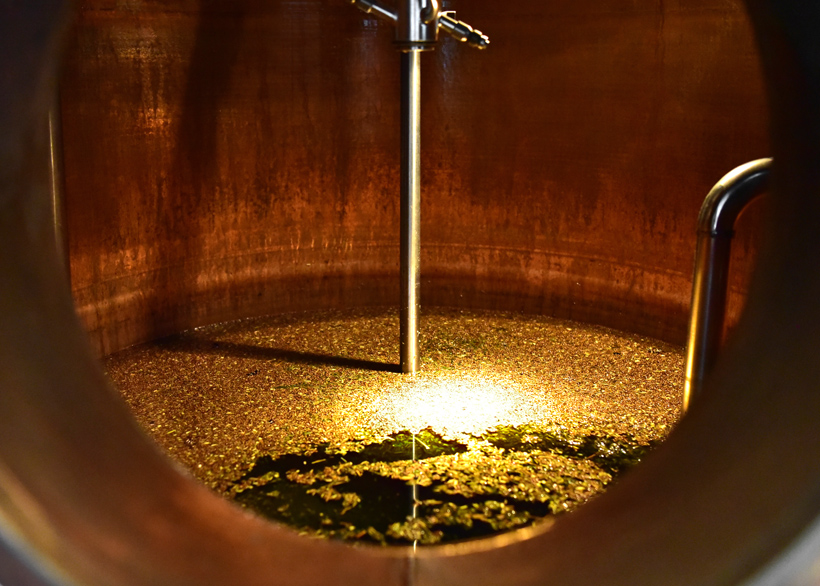 What comes out of the stills is a clear spirit. At this point, it can be left to rest for a while, brought to the desired proof by adding water, and bottled as a blanche absinthe (convenient, apparently, during the absinthe ban, to avoid drawing attention with a green liquid). Green absinthe requires an extra step. The clear distillate goes through what Martin calls the “colorator”: the coloring herbs (see above) are put in a bag — pretty much like a tea bag — then the absinthe is heated in a big kettle, the bag is plunged into the kettle, and the herbs macerate for about 2 hours.

Finally, the absinthe is aged for about 4 months — it used to be 1 year, but because of the demand again (“It’s selling like there’s no tomorrow!”), Martin has had to rush it a bit. The good news is, nobody stops you from keeping your bottle for a while before opening it (yeah, right!), as the absinthe keeps changing in the bottle (due to the second maceration). Right after distillation, you can still taste the coloring herbs, but after 4 months (and even more so after 1 year), they blend together and the result gets smoother. “Aging makes a huge difference,” Martin says. He should know, as he recently acquired a 1907 bottle of Pernod absinthe, which tastes amazing, and I suspect it’s not his first vintage absinthe. 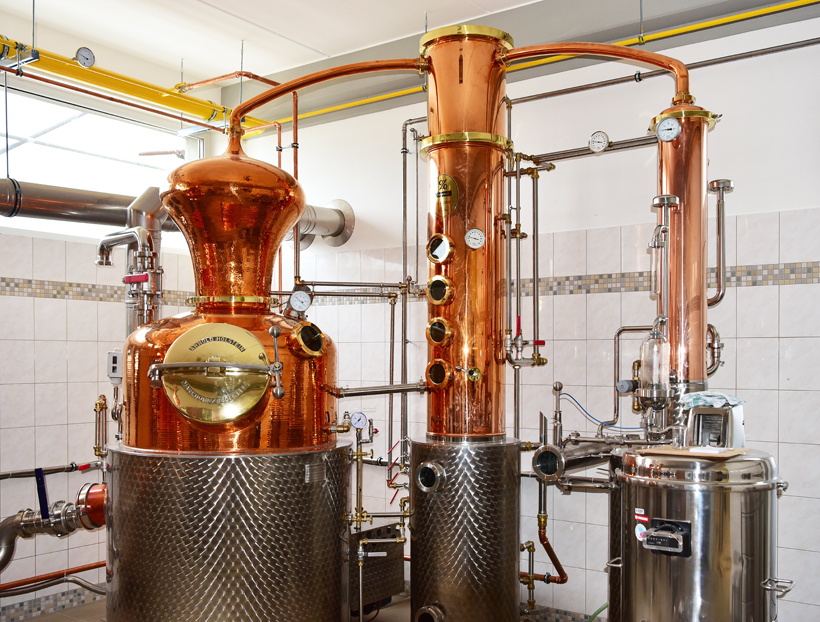 We then move on to the second still room, dedicated to fruit brandies. A batch of slivovice (plum brandy) is in progress. Plum season is in the early fall and it’s now early spring, but the amount of fruit grown on the adjacent Žufánek family orchard is so huge that it usually takes 6 months to distill it all — we’re talking about 9,500 trees on 15 hectares / 37 acres of land. Those plums were picked in September 2015, then they were fermenting until November, and they’ve been distilled in batches since then. All the fruits (plums, pears, apricots, cherries, greengages) are grown organically. The recipe is as simple as it gets: the fruits are crushed, put in a vat, and left to ferment by themselves without yeast, until they reach an alcohol content of about 12% alcohol. At this point, they await distillation. 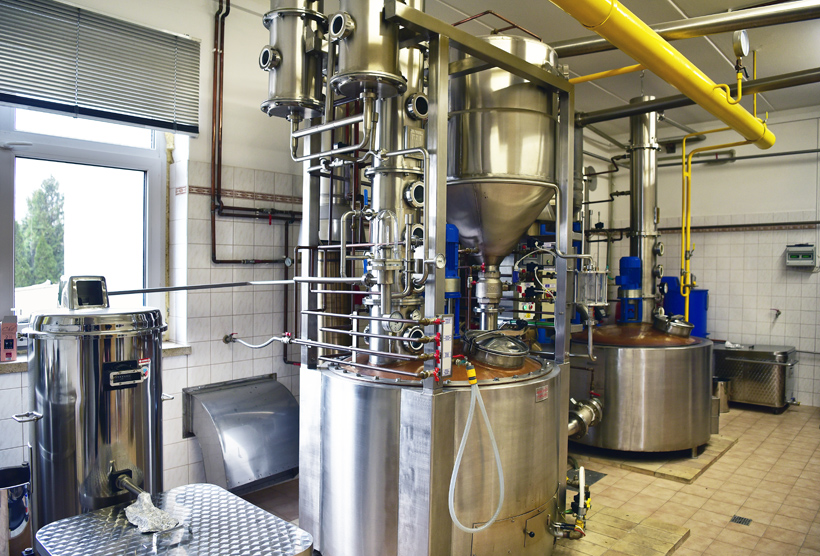 The fermented juice is filtered and distilled in stills that aren’t as pretty as the German copper ones, but function in much the same way if the rectification column is in use. The two stills are about 300 liters each, and each one makes about 50 liters of brandy. The spirit is aged for 1 year, some in stainless steel tanks and some in oak barrels, and eventually watered down and bottled. 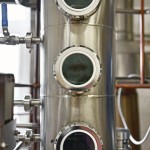 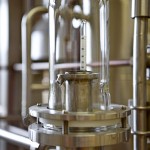 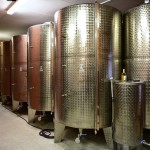 As we visit the rest of the distillery, we pass by the family’s private collection of fruit brandies, dating back from the communist era when Žufánek Senior was making moonshine (no bootleg absinthe, though). Bottle after bottle of slivovice and a strange brown zelický cognac (what’s that?) from the 1980s occupy the shelves. Next comes the distillery’s entire product line, and Martin’s personal absinthe collection, a full shelf of labels from all over the civilized world of herbal elixirs (that would be France, Switzerland, and the USA). 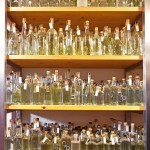 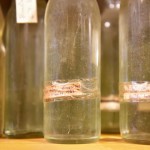 This is where it conclusively hits me that Žufánek isn’t in it for the tourist money. The fact that Martin went so far as growing his own herbs should have been a hint. And who owns dozens of different brands, some over 100 years old, but a true devotee? The guy loves comparing absinthes, and he makes no fewer than five different kinds in his small family distillery, adding up to a total production of 5,000 liters per year. 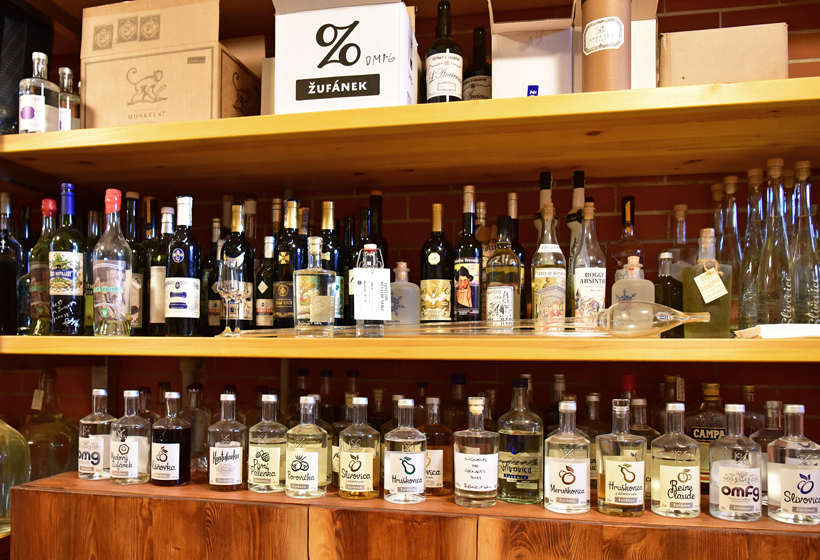 So it’s time to review all these different absinthes. St. Antoine is the one Martin started with back in 2008, an original recipe with a deep (but natural) green color resulting from the double maceration. Saint Anthony is the patron saint of the distillery and the region, hence the name (Žufánek loves giving French names to his absinthes, as you’ll see). 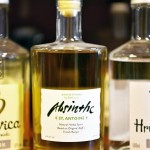 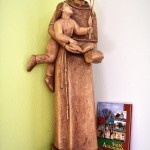 Two more versions have been added to the lineup. Amave is a blanche absinthe. I believe it uses approximately the same recipe as the St. Antoine, but without the second maceration. It’s also bottled at a much lower proof, like many similar brands from Switzerland. La Grenouille is made in a more Mediterranean style, and 1/3 of the herbs it contains are totally uncommon for absinthe, which gives it a peculiar smell.

Then there’s an absinthe made with mead base — Žufánek also makes his own honey, remember? It’s not clear whether there are plans to make more of it, so quantities are extremely limited at the moment. Here again, the process is the same once you’ve made the mead spirit (collect the honey, ferment with water, distill).

Finally, there’s Martin’s pride, L’Ancienne, “closest replica of a pre-ban absinthe ever made” (based on tasting, not on a chemical analysis). After acquiring a Pernod absinthe bottle from the early-20th century, it took him 4 years to faithfully reproduce the same flavors with his own products. The base spirit is a homemade, barrel-aged wine brandy, wormwood leaves are handpicked, and only one batch (80 liters, about 100 bottles) is distilled every year, before being kept in an oak barrel. Pre-ban absinthes had a slightly sweet taste and featured anise, fennel, and wormwood very prominently (Pernod used only 6 herbs, for example), and L’Ancienne is made the same way (anise from Egypt, wormwood from Pontarlier, fennel from Provence, and other herbs grown onsite). Martin, very generously, even gave us a taste of his 1907 bottle for comparison, and the similarity is striking. However, L’Ancienne is no more — 2014 was the last vintage. Žufánek is replacing it with a new product called Justifiée & Ancienne, which uses the exact same production process and wine brandy, but a different herbal formula (with more herbs). But if you think it’ll be any easier to procure, you’re probably out of luck! 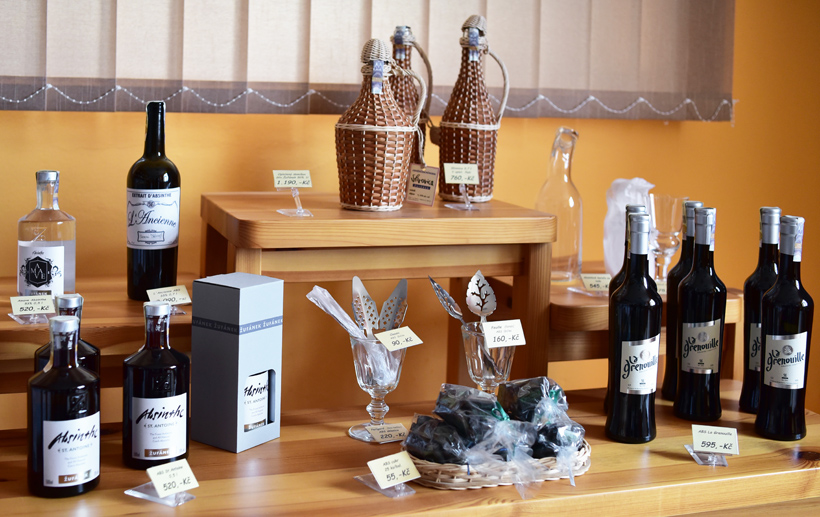 Mouths thoroughly coated with anise and wormwood, we get back on the road to Olomouc, where we’ll transition from absinthe to wine — the other popular Moravian drink. I started this mini-journey into Czech absinthe territory as a skeptic. Could I be leaving as a convert? In the last part of my story, I will finally reveal what all these absinthes actually taste like, the results from months of blindfolded experiments…