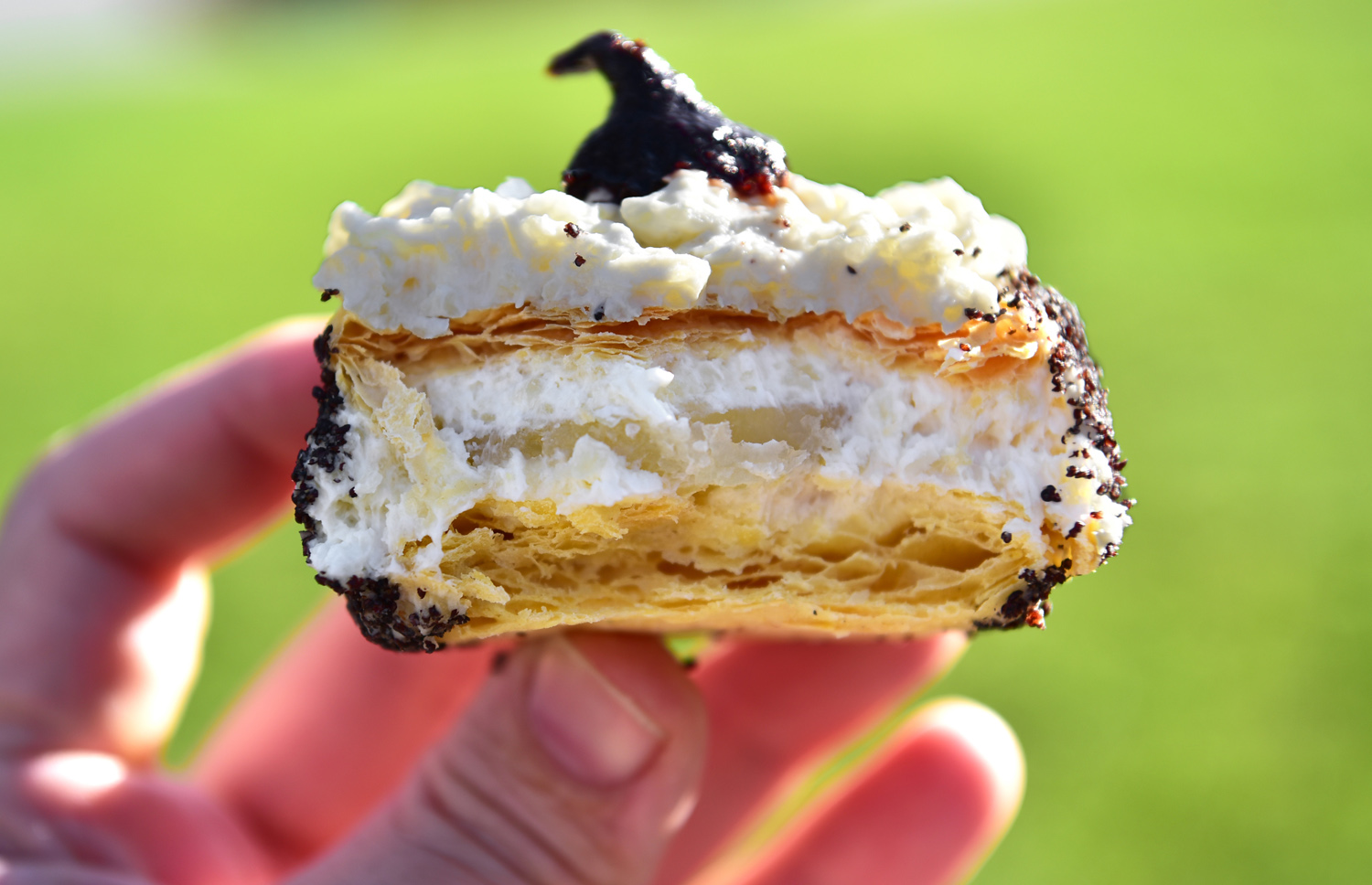 Last time, I told you about the history and fabrication process of Olomoucké tvarůžky, aka Olomouc cheeses. But I left the best part for today: the tasting! You may never find tvarůžky outside of Czech Republic, but I shall do my best to help you imagine what it tastes like, so that next time you find yourself in a pub in Prague, you won’t forget to order some to snack on.

The A.W. Company’s web site gives a vague but ominous description of its flagship product:

It has a completely unique spicy flavor, a typical smell, a surface with a golden yellow cover and a sticky semi-soft to soft consistency with a noticeably lighter core. It usually comes in the form of circles, rings, sticks or irregular pieces. It has a typical and unmistakable taste and smell caused by the (proteolytic) degradation of cheese proteins during the maturing process.

Don’t say you haven’t been warned — multiple times: “completely unique spicy flavor”, “typical and unmistakable taste and smell”… This isn’t going to be your ordinary farmer’s cheese. The detailed week-by-week characteristics of maturation, also on the web site, are more nuanced. Straight out of the factory, Olomouc cheese sounds very approachable: “yellowish ripe layer with a distinctive white quark core”, “quark-like” taste and smell. Fast-forward four weeks, and you’re left with a “deformed”, “orange-yellow”, “soft” disc with a “characteristic” smell and “spicy” taste.

Olomoucké tvarůžky at various stages of ripeness. Image from A. W. Company.

I decided to buy a package of ring-shaped tvarůžky at the factory store. Comparing the best-by date with the purchase date, I calculated a difference of three and a half weeks, putting me in kid-friendly “quark-like” territory. But to avoid the disappointment of unripened cheeses, I left them for about a day at room temperature, to accelerate the maturation (the manufacturer recommends storing them in the refrigerator; for an in-depth analysis of the impact of temperature, read the fascinating Biogenic Amine Production in Olomouc Curd Cheese (Olomoucké tvarůžky) at Various Storage Conditions). Boy, did this work beyond my expectations. I imagine that the ring-shaped version that I picked is one of the fastest to mature, and given the yellow color throughout and the soft and springy texture, I’d say I gained a good two weeks on the week-by-week maturation chart, thus entering the Land of Characteristic Smell and Spicy Taste.

I affirm, ripe Olomouc cheese is very salty and pungent. This is exactly how I felt the first time I tried it at Lokál. There’s a slight ammonia taste, which seems to be part of that famous characteristic flavor (see Biogenic Amine Production in…). Not necessarily in a bad way, but, well, the taste of ammonia isn’t everyone’s cup of tea. Just look at this old commercial: even badass Moravians open the window before eating tvarůžky.

The A.W. Company may be the last tvarůžky manufacturer, but they sure managed to diversify their product, churning out an incredible number of variations. You can get the cheese whole or in pieces, small or large, shaped like discs, rings, or sticks. It can be plain, or flavored with roasted onions, green peppercorns, red bell pepper, chili peppers, garlic, or caraway seeds. One version is marinated in oil with sliced onions, bay leaf, and seasoning. Another is mixed with six different kinds of peppers to make you forget it stinks so much — this product is called Haná‘s Fire. 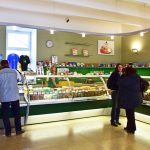 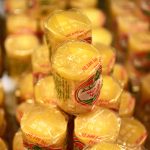 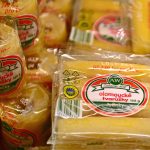 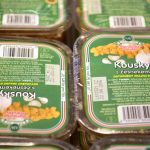 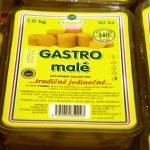 If you don’t have the time or inclination to travel to Loštice, the Olomouc information center has you covered — and Olomouc, Moravia’s historical capital city, is a considerably more interesting touristic destination. The info center, located right inside the Olomouc town hall, hosts a tvarůžky vending machine. It’s open 7 days a week, 9 am to 7 pm, so it can satisfy all but your most nocturnal cheese cravings. Not only can you stock up on stinky cheese discs without having to talk to a human, you can even buy Olomouc cheese in a tube! Obviously, Czech Republic has few reasons to be jealous of America when it comes to gastronomy. The only thing missing is microwavable hot dogs. 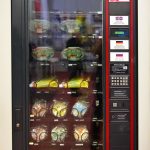 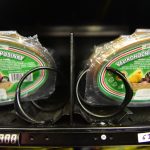 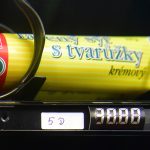 For the true connoisseur, however, it’s hard to beat Loštice’s tvarůžky pastry shop, which since 2009 has been preparing “original savory delicacies” made of a “delicate cheese mousse” —over 15 different sorts! Looking at their display, it’s easy to imagine the hapless tourist inadvertently entering the store, buying a couple cakes, and taking a first bite only to discover that these are not desserts at all. The signature tvarůžky mousse is paired with traditional ingredients such as plum jam, walnuts, gingerbread, almonds, ham, horseradish, garlic, or spinach, and most of the cakes include layers of homemade puff pastry. Fast food addicts can get their fix too, in the form of an Olomouc cheese burger, hot dog (presumably not microwaved), or lángos. Where’s the tvarůžky poutine? 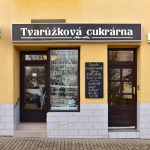 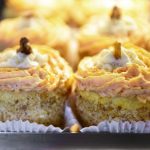 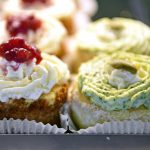 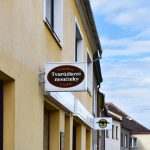 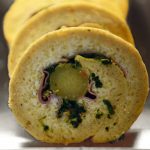 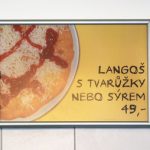 The shop’s Olomouc cheese cream roll is probably their original creation, a cigar of not-so-fluffy puff pastry filled with cheese mousse. The light filling, mixed with cream, is pleasantly mild and pungent at the same time — the cheeses that go into it must be closer to the quark end of the spectrum. It’s actually quite good. 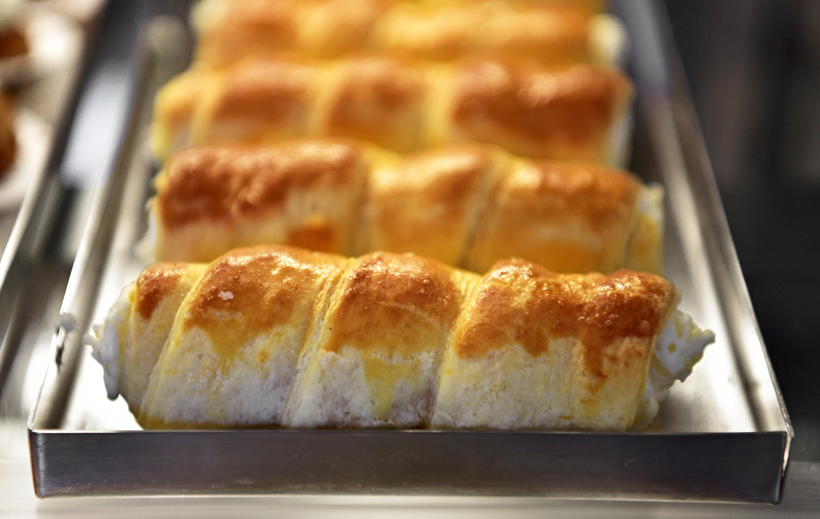 The strudel with tvarůžky, ham, cabbage, and caraway is another safe bet. It’s again pretty mild, and in fact it tastes so much like caraway that you can barely taste the rest. Disappointing. 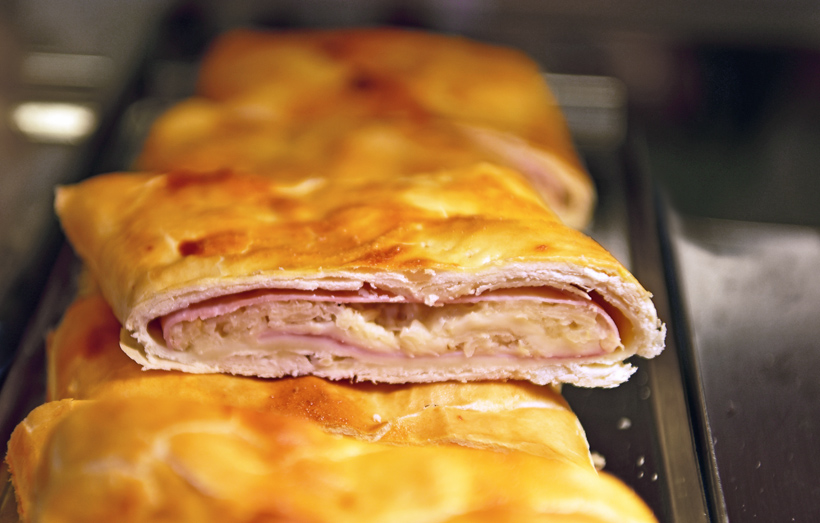 The Olomouc cheese “Moor” takes more risks (with its racist name as much as with its flavors). Its core still consists of cheese mousse between two layers of puff pastry, but the sides are covered with poppy seeds, it’s topped with a spoonful of sour plum jam, and in the middle there’s a disc of unadulterated, pungent Olomouc cheese. All in all, it’s not terribly pungent because of the milder layers, but it’s certainly stronger than the cigar. I think I’m acquiring a taste, as I don’t find this repulsive at all. The creations from this rather gimmicky shop turn out to be much better than expected! Of course, it was only a matter of time before someone tried tvarůžky ice cream. Also in Loštice, The Cunning Little Vixen Café (whose name comes from a children’s story turned opera), not content with serving tvarůžky pizza and tvarůžky panini, started making its very own Olomouc cheese ice cream last summer (with 1/3 cheese, no less). I haven’t tasted it because at the time of my visit it did not yet exist, but according to this article, it’s become quite a sensation.

Tvarůžky offer seemingly endless culinary possibilities. Recipe cards at the factory store sing the praises of schnitzel, stuffed mushroom caps, meatballs, pancakes, onion soup, ham roll-ups, deviled eggs, and potato casseroles, all enhanced by their cheesy goodness. The A.W. Company even published a cookbook (in Czech only), though the interest of this little book is somewhat limited considering that half of the recipes are already available on their web site (in both Czech and English). Still, completists will want to acquire a copy, and I’m surprised to see it on eBay. It’s got basically more of everything. There’s soups, salads, and toasties. There’s knedliks and all kinds of potato dishes, various meat roulades, and even fish — an unlikely pairing. There’s deep-fried tvarůžky, beer-battered tvarůžky, and grilled tvarůžky. There’s stuffed vegetables, stewed vegetables, baked vegetables, and fried vegetables, all with tvarůžky. A whole chapter is dedicated to upping Italian cuisine by replacing the cheese that inevitably tops every other Italian dish with, you guessed it, tvarůžky. The heat is on, Parmesan! Ciao bella, mozzarella! Spaghetti, ravioli, rice balls, pizza (all 10 recipes of it)… They all taste better with the stinky round cheese. The rest of the world isn’t spared either: Hungarian paprikas and Mexican chiles rellenos are also delicious with tvarůžky. And there’s a tvarůžky Big Mac. But we reach new gastronomic heights with the peach “dessert”, a fantasy made of peaches, cooked chicken meat, Olomouc cheese, and mayo… As I like to say, you can’t tell if an ingredient pairing doesn’t work until you try it! 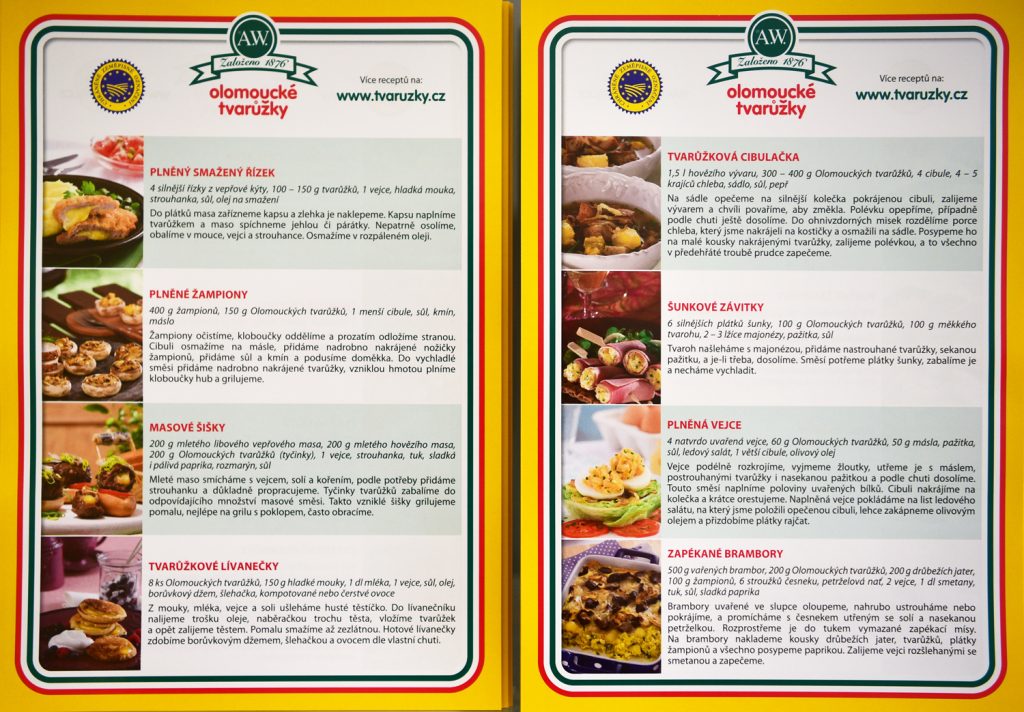 The cookbook keeps the best recipe for the end, and this is also pretty much how I discovered tvarůžky at Lokál: just sliced bread (preferably dark rye), butter, and a properly ripened Olomouc cheese. And a pint of very cold beer. The circle is complete. 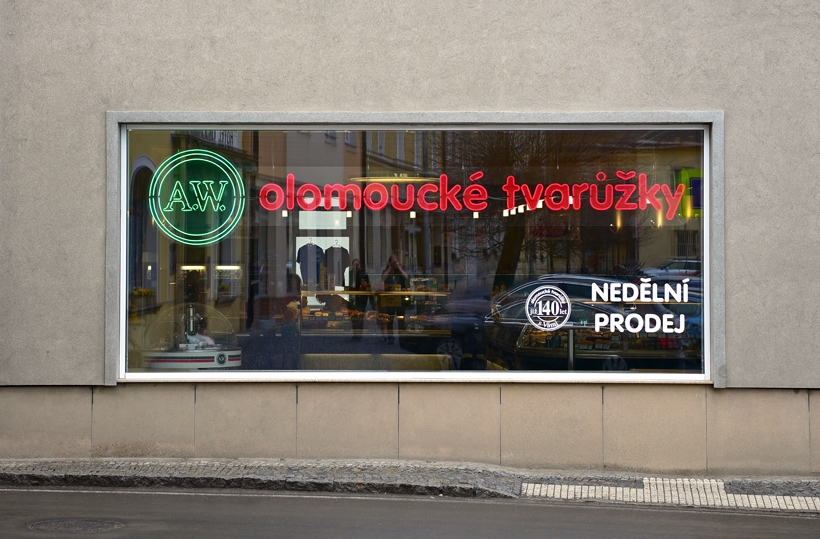