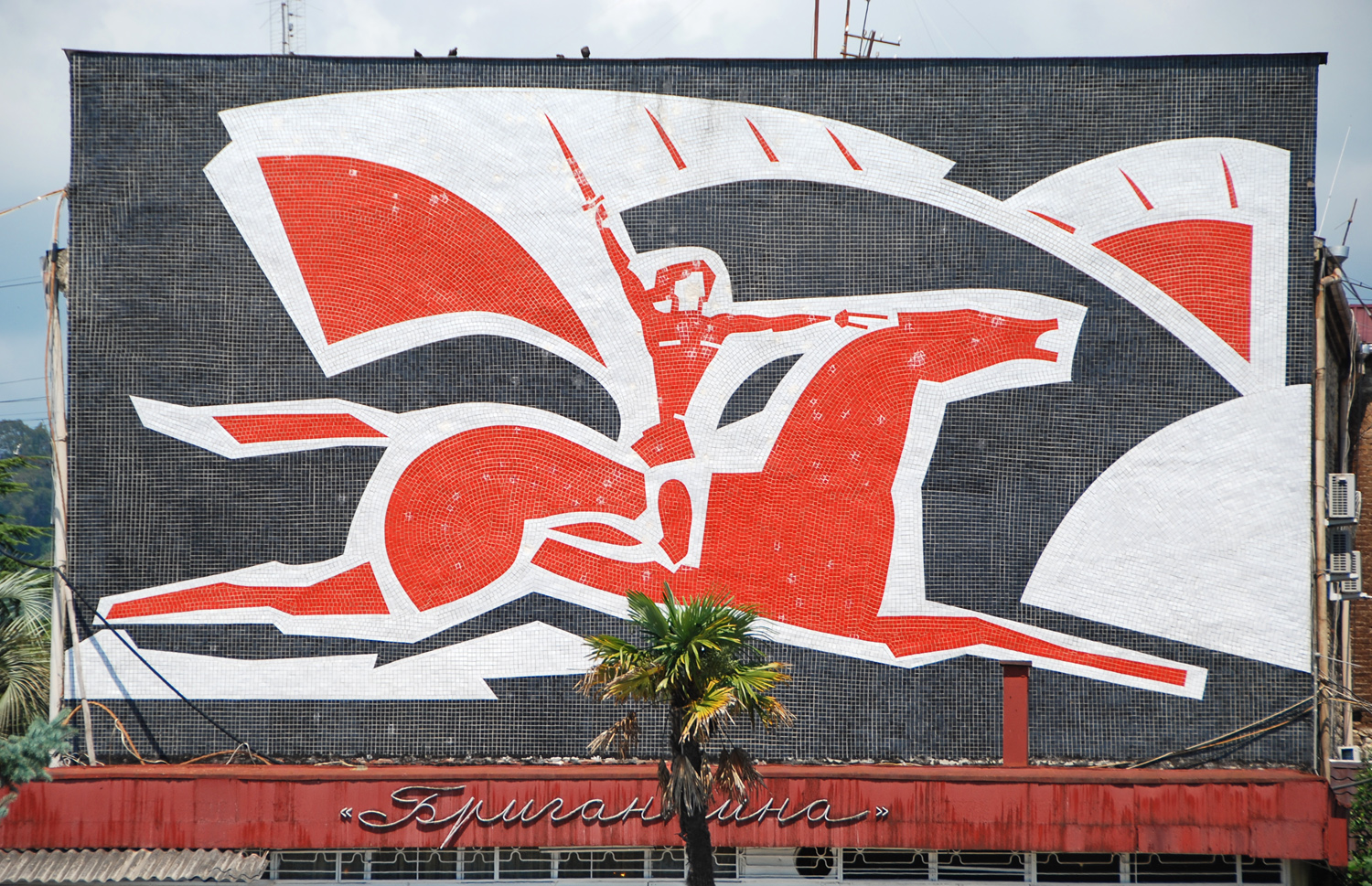 In our previous adventures, we entered Abkhazia, an almost-country that already has a language with a funky Cyrillic alphabet, a flag worthy of a banana republic, a warmongering emblem, a dead president (Vladislav Ardzinba, below), and authoritarian-looking billboards:

Not to mention some of the most accomplished Soviet bus stop architecture:

And some very Soviet-looking attractions, like the Novy Afon Cave. Situated inside the Iverian Mountain, the cave, one of the largest in the world, has been a major tourist destination since 1975, and features its own underground railway, as well as some serious socialist artwork:

Except for the Russians who don’t need a visa — after all, there would be no Republic of Abkhazia without them — and who spend their vacations on the beaches in the Western part of the country, almost all foreign tourists need to stop at the Ministry of Foreign Affairs in the capital, Sukhum. The town has a nice seashore promenade, a couple of buildings packed with all the government personnel necessary to masquerade as a nation, and some unexpected attractions such as a monkey nursery with a statue of a baboon and plans to send apes to Mars. In October 2011, Sukhum will host the little-known but illustrious World Domino Championship. Beware, domino players of the world: the Abkhaz people sometimes have a propensity for belligerence. On the first day of our stay, we were threatened several times with having our throats slit or being shot in the head.

Further up the coast is Gagra, a far more touristy destination, home to a famous stretch along the seashore hosting dozens of hotels, former Soviet sanatoriums, restaurants and cafés. Here is a vendor offering chebureks (Tatar deep-fried turnovers with a meat filling) at the terrace of a café on the beach:

If beaches of burning hot pebbles and jellyfish-infested waters aren’t your idea of a vacation, the Gagra market is definitely worth a visit to get an idea of the flavors used in the local cuisine.

Here are the spices. At the bottom left, khmeli-suneli is a traditional Georgian blend of basil, red pepper, dill, coriander, marjoram, and marigold, plus sometimes parsley, mint, savory, celery, bay leaf, and/or fenugreek. This one must be slightly different, as it is brighter and more yellow. Also in the pictures: turmeric, curry, cinnamon, coriander, cumin, cardamom, fenugreek, ginger, sesame, various peppers (white, black, red), thyme, savory, dried barberries, dried pomegranate, plov spice mix, shashlyk spice mix, Svan salt (a seasoning salt that can be used in a variety of Georgian dishes), and various other blends.

And here’s an assortment of honeys, teas, sauces (various kinds of tkemali), juices (mandarin, pomegranate, and… feijoa!), wines, and spirits. Mandarins and tea are specific to Abkhazia and you don’t really find them in Georgia, except maybe near the border in Mingrelia. Be wary of the alcoholic beverages, though: Abkhaz wine, generally made with table grape varietals, is vile. I had no problem drinking plain homemade Georgian wine at every meal for two weeks, but the Abkhaz stuff is completely undrinkable. And it gets worse: some of that bad grape juice is distilled into “cognac”, and bottled with heavy-handedly-added natural flavors — imagine a cheap brandy mixed with a whole bottle of, say, almond extract.

The cheese department is more in line with Georgian offerings: think sulguni, either plain or smoked. Nothing really out of the ordinary.

Lake Ritsa is another popular destination. Since car rentals are non-existent and taxis can be pretty expensive, your best option to get there is to join one of the day excursions advertised all over the place. For a very modest fee, discover tourism à la Russe! A Russian-speaking guide and a one-armed driver in a minibus will show you every notable feature of the Abkhaz hinterland, from the Maiden Tears waterfall to the twisty-turny “Goodbye, Motherland!” road, and give you the opportunity to participate in various degustations. Below are pictured honey and cold mead available for tasting — adding nuts to honey is a traditional local recipe. You can also try the wine, but again, believe me, you don’t need to. If you must, be sure to locate a container where you can spit it out.

The whole journey is quite entertaining, peppered with Abkhaz legends about the places visited and anecdotes about the virile Abkhaz traditions. Here’s the place where we had lunch. Now this is what I call a serious shashlyk grill!

Expect a couple of Abkhaz recipes in my upcoming posts!

Adjaran Khachapuri, or Death by Cheese

[…] a black tea cake with a mandarin sauce, two ingredients characteristic of Abkhazia — check out my pictures from the food market in Gagra. As it turned out after many experiments, it takes tons of black tea to get a flavorful cake, and […]

[…] as you want as long as you’re sober when you go to the mosque. The latter is even truer of Abkazia, but 1.) it’s not really a country, and 2.) they solved the dilemma by not building […]