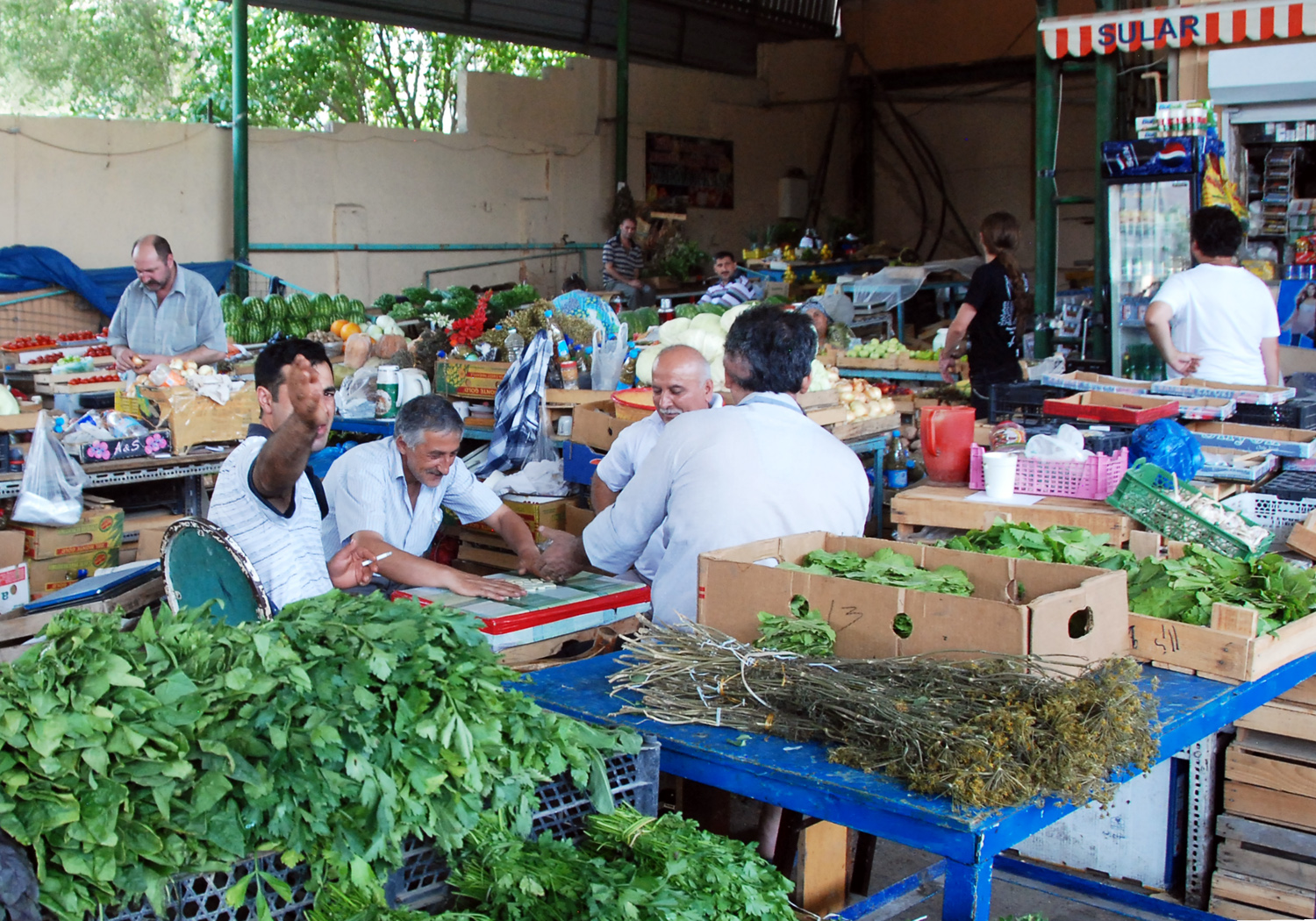 After exploring Baku’s restaurants, now we’re heading to the city’s main market, Taza Bazaar, one of the oldest in the city. Much larger than the central markets of Yerevan and Tbilisi, Taza Bazaar is probably the largest of its kind in the Caucasus.

Not only will you find a variety of foods, with a strong emphasis on vegetables (in summer, at least!), but a whole section is dedicated to various hardware, and, more opportunely, kitchen utensils. This is a great place to buy a samovar or a special cast-iron pan for your Chicken Tabaka.

The wide variety of climates throughout Azerbaijan allows for a phenomenal variety of fruits. Pineapples and bananas, apples and pears, stone fruits, citrus fruits, berries —  this country has it all. Not to forget the ubiquitous watermelon. FYI, if a vendor tries to convince you that it costs $40 a piece, even if he seems to be doing very complicated operations on his scale, he’s lying.

Vegetables and herbs are about as diverse. Some of the displays pack all the classic vegetables of a typical Caucasian meal neatly stacked side by side: cucumbers, tomatoes, peppers, and eggplants (plus some corn and potatoes for good measure). You’ll also see enough vine leaves to make lots and lots of dolmas.

For the winter months, you can find nearly the same selection in jars. Every produce under the sun — mushrooms, garlic bulbs, tomatoes, gherkins, olives, cherries, plums, apricots, pineapple, kiwi, walnuts, just to name a few — is neatly lined up in a colorful display.

In the dairy department, this booth gets the gold medal for the largest piling of curious junk. I counted no fewer than 6 vintage refrigerators, despite the fact that most of the merchandise is left outside. And what’s up with all the plastic pails? The large sacks on the counter contain cheese, I know that much. Given the size of the space, the variety of dairy products isn’t actually all that impressive: from what I could tell, we’re talking about cream, butter, milk, yogurt, and maybe half a dozen cheeses.

Although you may not see it on display because of the heat (over 100 F that day), there are also several vendors selling smoked fish. Just look for the antiquated freezers next to the stands that seem empty. I don’t remember exactly if the selection was limited to sturgeon, but we ended up tasting only that. Again, because of the heat, and despite the advent of refrigeration, expect it to be tasty but very salty. Luckily, the saltiness can be somewhat tempered by serving the fish with heavy cream and pancakes or potatoes.

Caviar follows a similar pattern. You probably won’t see it on display, as it is kept in refrigerators somewhere else. Ask around, and someone will take you to a small structure away from prying eyes, where the Great Game of Caviar Bargaining can begin. I should dedicate a separate post to the subject (The Art!), so for now I’ll just focus on my Baku experience.

The only thing that takes more time than buying caviar is buying a carpet. Incidentally, depending on their respective amount and size, they can cost about the same. First, we tasted a few “different” kinds. I say different between quotation marks because when the vendor has a tool to open and reseal caviar jars, and tends to carelessly stack lids of various colors on the table, there’s no way to know what’s what. The guy could get hold of a stock of beluga lids and run a pretty lucrative scam — he wouldn’t be B.S.ing his customers more than he already is. And speaking of B.S., the small jars in the picture used to be a standard 4 oz. Now the glass at the bottom is thicker, and the weight of the contents is down to 3.5 oz… except in every other jar, the thickness of that bottom is different!

So basically, don’t listen much to the sellers. Just pick what you like best. From the almost-black color of the eggs, you can tell all the jars in the picture are very salty (the heat, remember?). It’s not bad, but it’s not the best kind either, and it’s not particularly cheap. And believe me, I tried. I haggled, and haggled, and haggled, until my friends got nervous we were going to end up in a fight. My recommendation (as of the summer of 2011, at least) would be to skip the caviar in Baku and pay a visit to the central market in Kiev instead (Kiev happens to be a very convenient stopover if, like me, you have to travel half the globe to get to Azerbaijan): the prices are lower and the quality higher.

Also, FYI, Baku has discovered molecular gastronomy. What this means to the caviar buyer is that there are stores that sell black alginate pearls. The ones I saw were clearly marked as such in the ingredient list (provided you know how to read Azerbaijani or Russian), and the price was obviously way too good to be the real thing, but this could change is some vendor decides to be unscrupulous…

Off to the meat department. Lamb is king, of course. If, like Stalik Khankishiev, you believe it should never be refrigerated, you buy from the booth out front (did I say the temperature was over 100 F?). If, on the other hand, you agree that food safety is not a myth, the word bacteria rings a bell, and maybe you’ve even heard of the “danger zone” between 40 F and 140 F, the butchers in the back will help you.

Here are two interesting cuts! The cut on the left probably looks unfamiliar: it’s the tail of a fat-tailed sheep (kurdyuk in Russian), the preferred fat for any good kebabs east of Chechnya. On the right, the offals, all in one piece, for the proponents of nose-to-tail eating.

The selection goes beyond lamb, though, as Azerbaijan is one of the rare Muslim countries where you can buy pork at the market! It’s also one of the few Muslim countries where you can drink as much as you want as long as you’re sober when you go to the mosque. The latter is even truer of Abkazia, but 1.) it’s not really a country, and 2.) they solved the dilemma by not building mosques.

And of course, with all your fatty tail and liver kebabs, you will want some narsharab, a sauce made of reduced pomegranate juice:

Next time, we’ll be hitting the road again to travel north to the mountain village of Quba!

Really enjoying these posts, especially as Seth and I plan trips to the Caucasus, Eastern Europe and Central Asia. Thank you.

Thanks, Linnea! Wow, the Caucasus, Eastern Europe and Central Asia, that should keep you busy vacationing for quite some time 🙂