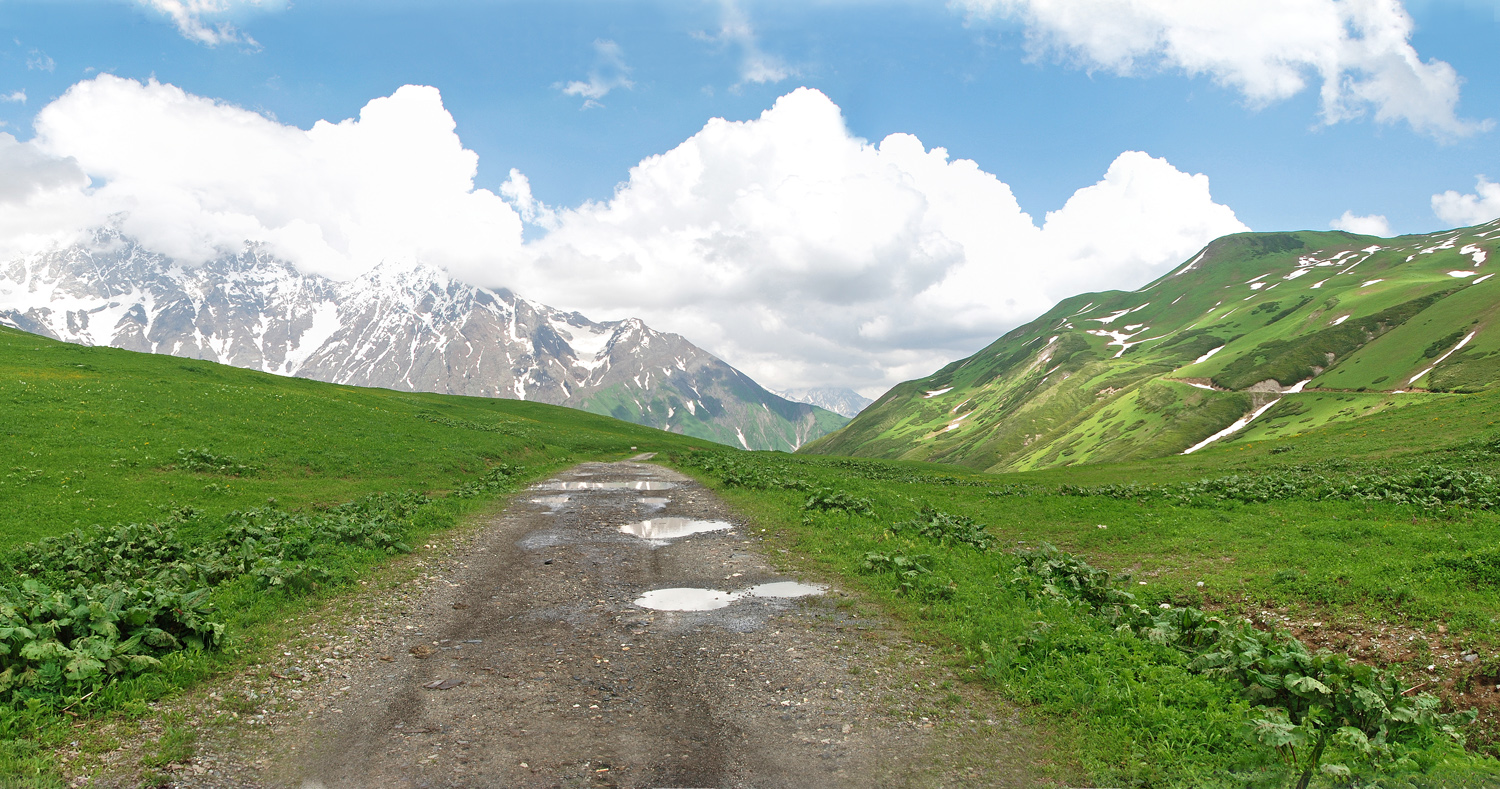 In our last Georgian adventures, we were being jolted about on the roads of Svaneti.  One flat tire and many overflowing streams later, we reached the coveted Zagar Pass.
From there, it wasn’t long until we got to Ushguli, the climax of our trip. At 2,200 meters (7,200 feet), this is the highest permanently inhabited settlement in Europe, a conglomeration of three tiny villages dotted with Svan towers, the snow-covered Mount Shkara in the background:

And these stunning defensive towers are well worth the trip. By many aspects, they remind me of the tower houses in the Balkans, especially in Albania.

One might wonder what exactly, in such a remote setting, these towers were supposed to protect their occupants from. After all, due to its situation in the middle of the greater Caucasus, this land has never been conquered. And if they were supposed to protect the inhabitants from avalanches, as some suggested, why would the towers be scattered randomly at the bottom of a valley? The real explanation seems to be that enemies didn’t come from the outside but from within. When two families squabbled, one would seek refuge in their tower while the other was attacking them. Each tower featured an elevated entrance accessible only with a ladder, a good stock of rocks to throw at the opponents, and a secret passage leading to a supply of water and more rocks. The Hatfields and McCoys of the Middle Ages!

And this is precisely where Ushguli begins to evoke both Borat and Lord of the Rings. Living there remains very rustic, with hardly any cars in sight, running water coming straight from the river, and animals roaming freely on the muddy streets and yards.

We spent the night at Dato Ratiani’s charming and comfortable — at least by local standards — guesthouse (yes, they have a website), where we enjoyed a copious meal of Svan, Georgian, and not-so-Svan-or-Georgian specialties. These included chvishtari (a kind of pancake made of cornmeal and cheese), khachapuri, fresh tomatoes, and eggplant salad, as well as pizza and spaghetti. We were also offered a free 1/2 gallon bottle of chacha 🙂

The next day, we picked up the usual hitch-hiker and took the road to Mestia, making several cultural stops in small villages along the way. In one of them, the Nakipari Church of Saint-George displayed interesting reliefs representing wild animals. The church is also renowned for its well-preserved 12th century frescoes, but the moronic caretaker took one look at my piercings, thought I was the Antichrist, and refused to let me in.

With a population of about 2,500, Mestia is larger and less rural than Ushguli. Thrill factor notwithstanding, I think it might be more picturesque, too:

We stayed at Hotel Tetnuldi, a near-luxury hotel overlooking the town and a welcome change from our previous nights’ stays. The building was actually still under construction and only few of the rooms were finished; we must have been among the first customers, and definitely the bar’s first serious patrons.

I was happy to meet a fellow supporter of cooking from scratch. Not only was the fire for the grill made with real wood, but the wood was cut to order by the head chef himself! It probably didn’t hurt that we were the only diners in the restaurant.

The road from Mestia to Zugdidi the next day was rather uneventful and partly blurred by the impromptu party we threw at the hotel bar, but it will be the starting point for my next chapter: Abkhazia!

Meanwhile, here is the recipe for the chvishtari, the cornmeal and cheese specialty dish from Svaneti. A sort of mchadi with cheese, one could say, though not as dense.

The chvishtari were excellent! The cheese taste is surprisingly subtle. They went nicely with salmon.

How thick should the polenta look while it’s cooking? Mine was looking quite thick (like molasses), so I increased the water by about 25%. I used standard cornmeal instead of a brand labeled “polenta” (so the grind might have been less fine), and all was well.

Also, since they break quite easily if not yet browned (as you warn): I found it helpful to wait until small bubbles form on top before flipping, like pancakes.

I love the Georgian adventures, too.

Glad you like the chvishtari (and the adventures), Morgan! The polenta should definitely be very thick, like a paste. The moisture from the cheeses and egg will redistribute while the mixture is resting in the fridge. Depending on the water content in your mozzarella and feta, I can see how you might have to add some more liquid.

Stunning landscapes!
I had dinner at a Georgian restaurant in London on Sat, and they served pelmeni. Now, I thought those were Georgian dumplings, but Google says they’re Russian. Do you know what they might be? Thanks.

Pelmeni are Russian, but there are plenty of fairly similar dumplings in other parts of the Empire. Georgia makes khinkali, and you can check my Georgian restaurant reviews to see what they’re like.