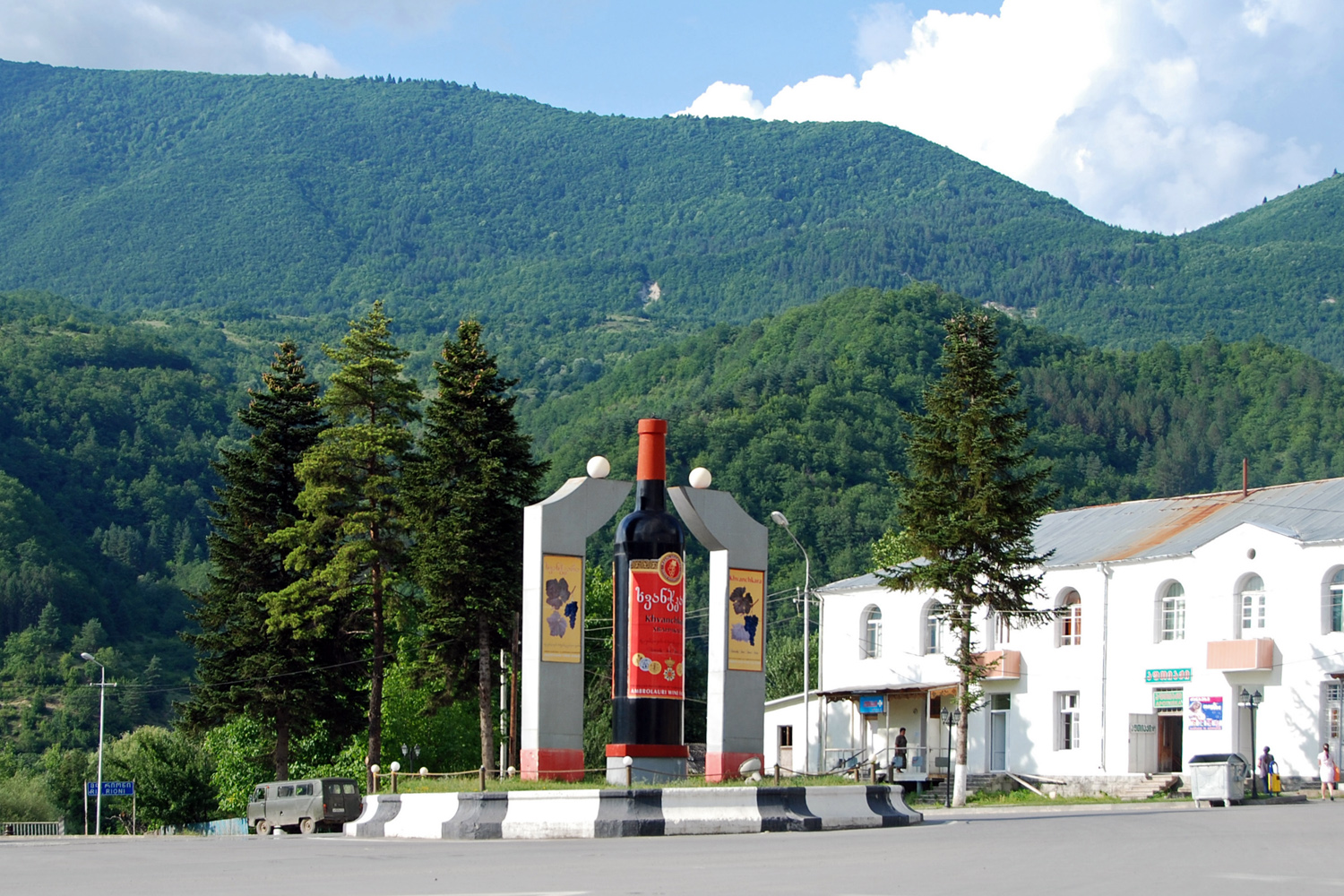 Our next trip in the Georgian Caucasus took us to the small province of Racha, known for its traditional culture, honey and wine. A quick look at the roadside food stalls reveals plums, figs and lady apples, but also chanterelles:

And here is some of the famous Racha honey. Dozens of beekeepers are set up along the main highway. Acacia and mountain flowers are the main varieties, and you can buy jars containing whole honeycomb clusters.

Of course, no trip would be complete without a Soviet relief exalting the Soviet Georgian values: family, peace, and lots of wine.

We even found Baba Yaga! It turns out she retired in an abandoned Soviet factory near Ambrolauri:

We finally reached Ambrolauri, the regional capital of Racha, “capital” being a big word for a town of 2,500 inhabitants. You’ve probably never heard of it, but Racha was the epicenter of the most powerful earthquake recorded in the Caucasus, back in 1991. The tasteful “sculpture” on the main square confirms that our goal is near: the most famous wine of the region comes from a nearby village called Khvanchkara. Khvanchkara is a semi-sweet red wine made from Alexandria & Mudzhuretuli grapes. Along with Kindzmarauli, it was supposedly Stalin’s favorite.

As we left town and drove West, vineyards started to appear on the mountain slopes. There are only two full-on wineries in the region, as the other producers all transport their grapes to facilities in Kakheti. But in fact, the total planted area is so small that many producers simply make a wine in the Khvanchkara style using grapes from other regions. You can find more information about the two local wineries and the wine itself here.

Since Racha sees very few tourists, you won’t find signs singing the praise of such-and-such’s family wine, either. Your best option is to ask a local, who will gladly jump in your car and direct you across the village until some friends open up their doors for a degustation.

Don’t expect long discussions about terroir or micro-oxidation. Firstly, they have only an approximate knowledge of Russian and you probably don’t know Georgian. Then, the whole operation takes place in a garage. Our host poured copious glasses straight from his plastic barrels, accompanied with a plate of delicious bread, cheese and tomatoes.

And the wine was very pleasant, I must say. If you keep your expectations moderate, homemade Georgian wine can be among the best the country has to offer. It’s an affordable, sweet and refreshing beverage to enjoy with food on a hot day. Too often the large wineries pride themselves on using “latest Western technology” and struggle to produce an expensive but boring wine with few distinctive characteristics. Meanwhile, there’s a whole movement of people in Italy making high-end natural wine aged in amphoras — and these wine-makers buy their amphoras in Georgia!

Time to say goodbye to our new friends:

I enjoy reading about your adventures in the Caucasus. I have dreams about going to Georgia one day. Hopefully next time i am in Azerbaijan, I will cross the border:)