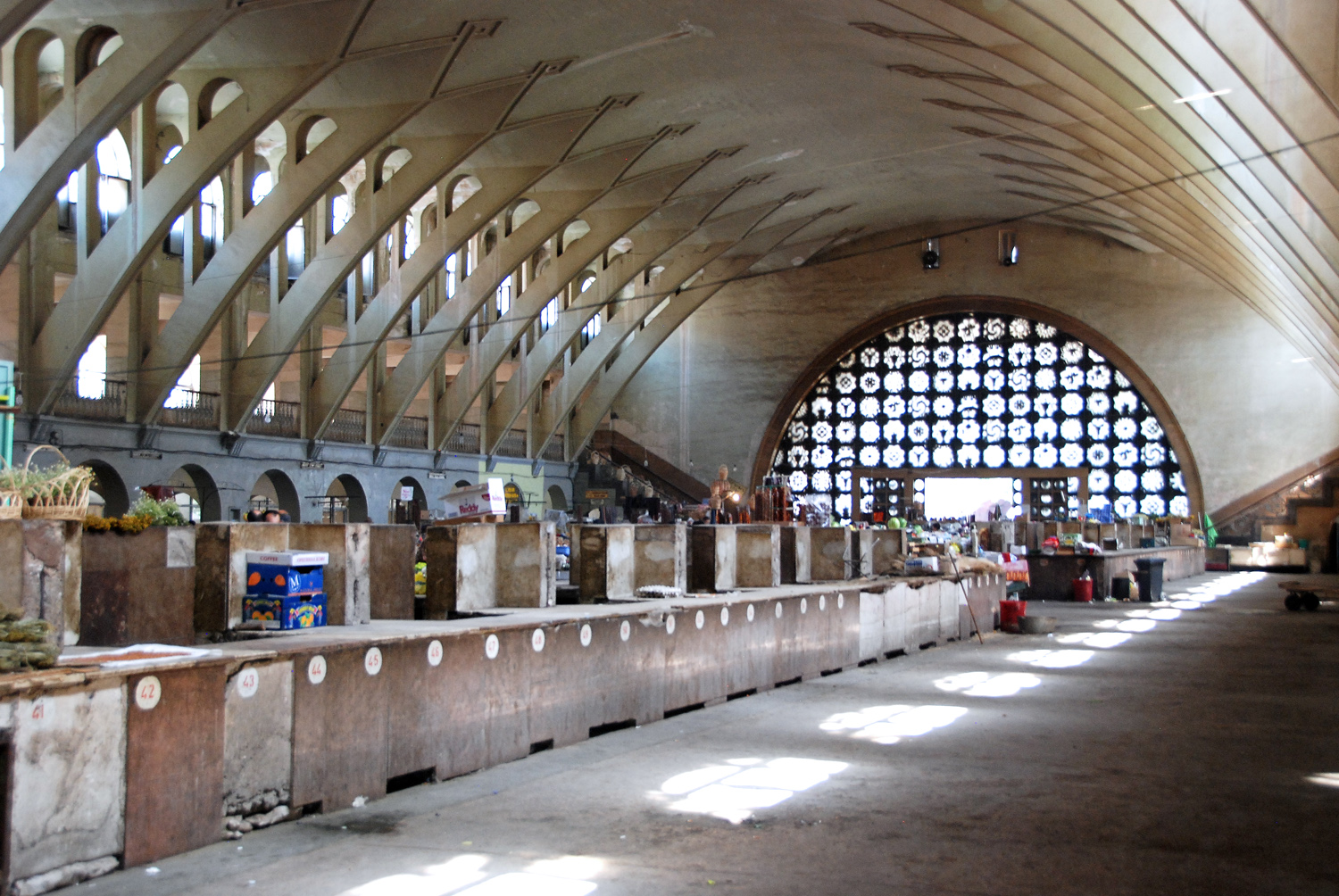 It’s been over a month since I concluded my Georgian Adventures with a look at the stores and markets of Tbilisi. And to start this Armenian Adventures series, I thought I would introduce you to Yerevan’s central market. I also recommend this excellent post about food and wine in Yerevan. Don’t miss the bread-making video!

From the outside, the central market distinguishes itself by the unusual sight of the dancing fruits and vegetables that decorate the roof:

As you’ll see, this visit will get us acquainted with the major ingredients of Armenian cuisine.

Mulberries (tut in Armenian), white and black, are everywhere during summer, to the point where I wonder why anyone would bother buying them at the market when all you have to do is put a plastic tarp under a tree and collect your berries at the end of the day! They produce delicious homemade brandy, too.

Lavash, a large flatbread, is another Armenian staple, and there’s no shortage of it since very few people still make their own. Careful, though — it dries out quickly!

Cheese, together with tomatoes and cucumbers (and lavash!), is a lunch classic. The most common kinds, traditionally made from sheep’s milk, are a sort of brynza and a string cheese:

Just like its Caucasian neighbors, Armenia is a paradise of nuts and dried fruits. You may recognize the churchkhela (mental floss here). The dark sheets hanging next to them are fruit lavash, made from plums or other seasonal fruits.

Spices and honey are well represented too, but I need your help, dear readers! If anyone happens to know Armenian, could you send me the names of the spices on the picture? (I can send you a larger version.)

Finally, no overview of the local cuisine would be complete without mentioning khorovats, the Armenian barbecued food that you’ll be eating in 99% of the restaurants in summer, whether it’s vegetables, fish or meat on a skewer — everything is on a skewer since the traditional grill doesn’t use a grate. There’s even a street, Proshian St., nicknamed “Barbecue Street”. Here are the ground beef kebabs of Artashi Mot, a famous restaurant in the city center.

Expect some kebab and lavash recipes and in the coming weeks!

Note: despite the three product placements in the above pictures, this post is not sponsored by Coca-Cola.

Love these photos! I loved going to markets like this when I was travelling in Europe, with the beautiful arched ceilings and all the different booths with various wares.

Thanks Sara! I’m considering starting a series just on Eastern European markets, maybe once I’m done with my adventures in the Caucasus.

I think I never saw so much meat in my life as at the one in Budapest..

[…] Part 1‘s visit to the Central Market, here are some more food-related pictures from the Armenian […]

Florian, thank you so much for writting about Armenia, and showing very typical things and for writting so good…that I want lavash with cheese and tomato right now. 🙂

Thanks for your writing. I just want to add that it is right that lavash dries fast. But when you sprinkle some water and cover with a towel, it becomes fresh again. In the villages the women at the end of autumn bake the winter lavash for the whole season and keep it in the basement. 15-20 minutes before using it they bring it home and sprinkle water.
Also, we use lots of greens. And lavash, cheese and greens is also very good 🙂

It’s so unfortunate. That central market was closed. The people protested but big business won. It’s a supermarket in there now believe it not. There are still smaller markets similar to the central market where you can find similar vendors, but it’s a little more time consuming to find everything you need since you may have to go to a few places instead of just one. It’s become my tradition to go straight from the Airport to Artashi Mot each time I arrive in Yerevan : )

The pictures are really cool