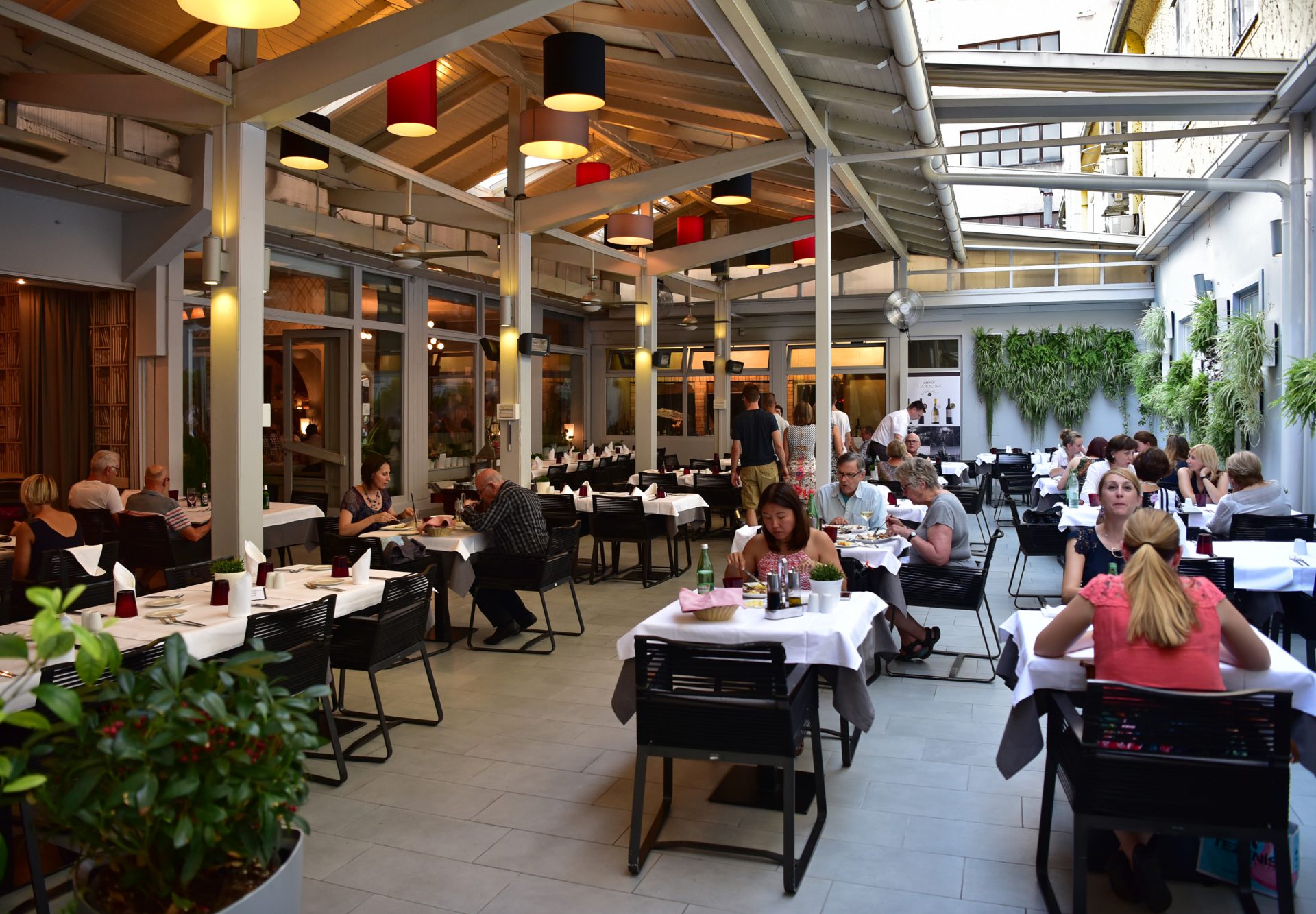 Being over a hundred kilometers from the Adriatic coast, Zagreb may not be the top Croatian destination in most tourists’ minds. Yet the capital city certainly has much to offer, not only in terms of architecture and museums, but also a wide variety of restaurants. Today we’ll look at the high end of the dining scene, with two establishments: Vinodol and Dubravkin Put.

Located in the heart of downtown Zagreb but tucked away in a sort of courtyard, Vinodol has been welcoming locals and tourists alike for decades, and is highly regarded for its strong focus on Croatian ingredients and dishes. As the web site claims, “Our meals are prepared according to traditional recipes, with a modern approach.” With almost 300 seats indoors and outdoors, this is a large restaurant that can’t truly be called fine dining, and yet it goes for a contemporary and elegant vibe, with white tablecloths and careful presentation – so don’t expect a movie set décor with waiters wearing folk costumes.

The menu does indeed deliver Croatia’s most praised ingredients and quintessential specialty dishes. Whether you’re looking for Adriatic seafood, Istrian truffles, Pag cheese, Prgica cheese, meso ‘z tiblice (cured pork preserved in fat in a wooden firkin), pršut (prosciutto), or venison charcuterie, Vinodol has it. It’s also the perfect place to try veal “under the bell” (more on this later), Zagorje štrukli (a kind of lasagna with cottage cheese), Istrian fuži (a type of pasta, here served with truffles), or a Zagreb veal steak (stuffed with ham and cheese). Reading the menu again now, I’m starting to regret that I couldn’t try it all! But here’s a small selection.

The octopus salad with potatoes and Pag cheese is an overly generous serving of octopus with a tiny bit of potatoes (not that I’m complaining). The well-cooked, tender octopus is sliced and tossed with olive oil, parsley, and maybe some lemon. Next to it are the potatoes, boiled and diced, and a lonely caperberry that could have been mixed with the octopus. The delicious Pag cheese (a hard sheep’s milk cheese from the island of Pag) comes on the side, along with a couple wide brushstrokes of balsamic vinegar, a cherry tomato, and some microgreens. It’s a good dish overall, but it feels a bit like two separate courses on the same plate: the octopus and potatoes on one hand, then the cheese, vegetables, and balsamic on the other.

The Istrian minestrone with smoked pork tenderloin, wine vinegar, and grated sheep’s milk cheese is served table side. The serving bowl is brought out with two thin slices of smoked pork at the bottom, and the waiter pours the soup on top. What makes this minestrone Istrian is chiefly the addition of meat (pork, most of the time). This is a very flavorful recipe, with lots of greens, beans, potato, tomato, carrot, and dill. I can’t really taste the vinegar but that’s a good thing (I don’t like sour soups). The smoked meat is tender and not overpowering, and there are also little pieces of sharp hard cheese that go really well and add extra little bursts of flavor.

The cottage cheese ravioli with smoked mussels, Adriatic shrimp, and cherry tomato sauce also look like a soup. The tiny shrimp and mussels boast bold seafood flavors, the cherry tomato sauce (which is more like a broth) captures the essence of tomato flavor, and the mild cheese ravioli kind of balances everything out. It’s a well-executed recipe that exhibits an impressive variety of textures while still keeping a tight flavor profile (as opposed to pasta tossed with a bunch of random frutti di mare, for example).

The veal “under the bell” is one of the reasons I picked this restaurant in the first place. The idea behind cooking “under the bell” (pod pekom in Croatian) is quite simple. A large dish of protein (such as veal, lamb, or octopus, whether in one large piece or in smaller chunks) and potatoes is cooked in a charcoal fire, covered with a vaguely bell-shaped lid that’s also topped with embers (notice the metal ring around the bell that helps keep the ember from falling off the top). This way, the food is cooked at a very high temperature, and the moisture and flavors are mostly trapped inside the bell. Vinodol prepares veal roasts under the bell twice a day, for 12:30 and 7 pm, so they’re ready for both lunch and dinner services. You can see the bell in the outdoor dining area, next to the grill used for pljeskavica and other steaks.

Is it really worth all this effort, compared to a dumb veal roast cooked in an overpriced enamel Dutch oven in the comfort of your kitchen? I must say that Vinodol’s rendition doesn’t entirely convince me. The meat, probably from the chuck, is reasonably tender but not amazingly so (slicing it more thinly would help). It tastes good; I get some grilled flavors, but I’m not wowed. The very cooked potatoes, having absorbed the meat juices, are particularly flavorful, and they’re mixed with pieces of tomatoes, onions, and a little bit of lemon juice. It is a slight improvement over that typical Dutch oven roast with potatoes, but I do think it has the potential to be even better!

Here’s a table of all the ingredients that appeared on Vinodol’s menu on the day of my visit, sorted into categories. Only the savory dishes are included, as the dessert menu was short and rather conventional (think chocolate, caramel, vanilla sauce, and ice cream, plus a tart and a strudel). The list clearly shows Croatia’s rich traditions of charcuterie, cheese, and pasta making, and the recurring ingredients also include potato, cabbage, wild mushrooms, beef, and veal. For many people, this list would sooner evoke Italy than Croatia, but that’s just a reminder of the similarities between the two countries. Beyond geographical proximity, shared history, and disputed territories (like Istria and Zadar), they share the same variety of climates, from the Adriatic Sea to the Dinaric Alps bordering the Italian Alps – and the same love of food.

On the edge of Tuškanac Park, Dubravkin Put, named after the street where it’s located, feels like an elegant restaurant hidden in a forest, making it easy to forget it’s just a fifteen-minute walk north of Zagreb’s main square. Like the surroundings and the modern dining room suggest, this is a bona fide fine dining establishment. It’s featured in the Michelin guide. It’s regarded as one of Zagreb’s best restaurants. Its menu changes seasonally, and its ingredients are local – on the web site, they list the provenance of many ingredients, and mention that they “work with local producers, fishermen and hunters,” and buy “vegetables from the main Zagreb market.”

In the evening, the restaurant serves Croatian cuisine “with a nod to Italy,” according to Michelin. But Dubravkin Put must suffer from a mild case of schizophrenia, because for lunch (at least when we were there), it offers what’s more like Italian cuisine with an imperceptible nod to Croatia. Considering the connections between Croatian and Italian cuisines, they might as well hang a green, white, and red flag above the door.

So today, Food Perestroika – Adventures in Eastern Bloc Cuisine – will ostensibly be reviewing an Italian restaurant, as if there aren’t enough of them in New York, where I live. Or in America as a whole. Or all over the rest of the world, for that matter. This is rather sad, because entering Dubravkin Put, you’re greeted with a fantastic wall of Croatian wine bottles.

The amberjack cappellacci with roasted fennel and fresh tomato sauce are shaped like giant tortellini. The dish will please adepts of all things minimally cooked: the roasted fennel is crunchy, the pasta probably errs on the wrong side of the thin line between al dente and just plain underdone. The cappellacci dough is pretty thick; I know it makes them prettier (fewer wrinkles) but I wish it was thinner. Regardless, the filling is excellent, made mostly of the flavorful amberjack fish – and there’s a lot of it, thanks to the pasta’s large size. The vivid sauce and tomato and garlic chunks all taste very good.

More pasta next: rigatoni with pancetta, garlic, sour cream, and forest mushrooms. Still molto al dente, if you ask me. I think the mushrooms are chanterelles, shitake, and cremini. Even though they taste good, the whole dish is disappointing. The pancetta is very salty, the rest not salty enough, and the sour cream sauce is too liquid.

The braised beef cheeks with baby cabbage, carrot, and pan-fried potatoes with onion, on the other hand? Truly excellent. The big chunks of beef cheek are super tender and coated in a rich, thick sauce probably made with reduced beef stock. The potatoes are also very tender, and tossed with fried spring onions. Very classic, but pretty well executed apart from the sauce being perhaps a touch oversalted.

All in all, the meal is disappointing. The dishes, all very simple and/or very classic, often with questionable cooking doneness and salt levels, fail to impress. And of course, unbeknownst to us in advance, this ended up being pure Italian cuisine! Had we come for dinner, our meal would have been completely different: cold kefir soup with cucumber and trout roe; rooster consommé with black summer truffle; black Slavonian pork ribs with peaches, nectarines, chili and pickled onion; rabbit with hazelnut, dried apricot, zucchini, celery root, and morels; or maybe the fresh fish (served with Swiss chard and potato, natch) the restaurant is supposedly famed for – NOT bruschetta and pasta! Here are all the ingredients that appeared on the very diverse savory dinner menu, several hours later on the same day as our visit:

I remember that I had two wines by the glass. Both were excellent, and I asked the waiter to write down their names, but I lost the paper. Good job… Maybe I can make up for it by posting about Croatian wineries some time soon!