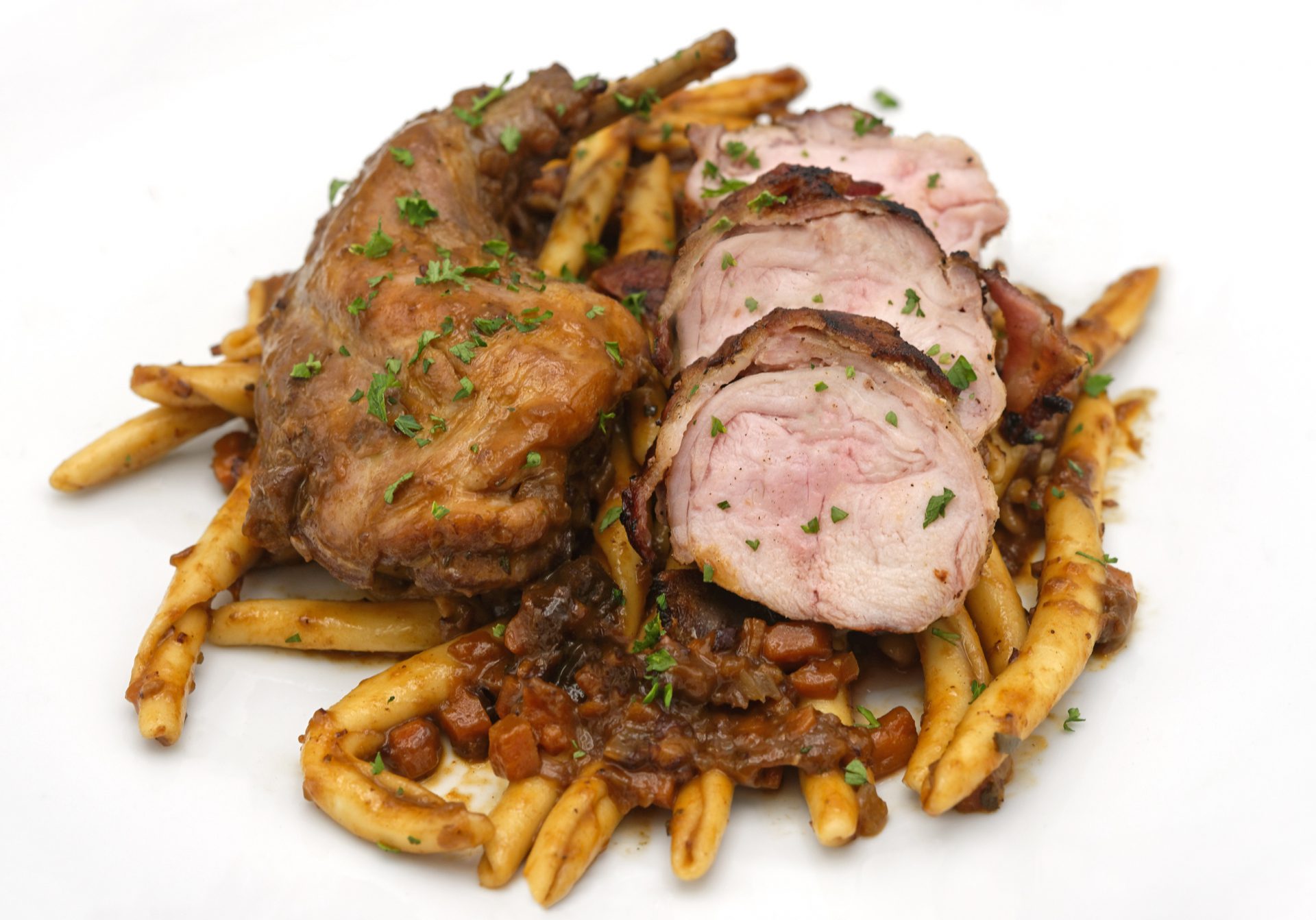 When I wrote about the Dolac market in Zagreb, I mentioned that Croatia boasted an inordinate number of rabbit recipes. Judge for yourself:

Together with pheasant, rabbit remains a quarry of choice for local hunters (if only because it’s not extinct), and that certainly plays a role in the meat’s popularity in the kitchen. It also comes as no surprise that most recipes call for marinating, since wild rabbit is tougher and needs to be tenderized before cooking.

Most of those recipes have a lot in common, and my dish is heavily influenced by many of them (especially Bujić’s). I skip the marinade because I’m using farmed rabbit, which is already very tender. Then the main difference is that I choose to cook the rabbit loins separately on the grill, because, like with poultry breasts, that cut doesn’t need to be cooked as much as the legs, and stewing can make it a bit dry. I also wrap the loins in bacon, in the spirit of the Dalmatian rabbit preparation.

Rabbit is often served with pasta, gnocchi, polenta, or mashed potatoes – most recipes already include stewed vegetables with the meat. I find Ino Kuvačić’s makaruni na iglu (literally “pasta on the needle”) to be the most interesting: pieces of pasta dough are wrapped around a needle (like a knitting needle) and rolled into a long tube. This pasta shape also exists in Calabria where it’s called maccheroni al ferretto (ferretto being the needle) or maccheroni Calabresi (I’ve also seen them called fusilli instead of maccheroni, though fusilli otherwise refers to a different pasta with a corkscrew shape). Check out this video to see how to make it.

I’m all for making one’s own tagliatelle and ravioli, as fresh pasta yields an inimitable texture. But I have to say, I’m not sure it’s worth doing your own makaruni na iglu. First, rolling the shapes by hand one by one takes forever – you need quite a lot of them to fill a plate. Cooking is filled with repetitive tasks (I sometimes wish I never had to pick spinach ever again!), but this one takes the cake. Well, I’m sure it gets better with practice, but the problem is, the result doesn’t really stand out. You can buy ready-made maccheroni Calabresi here or here (the latter are a bit shorter), and since people in Calabria generally use semolina flour and no eggs, there’s virtually no difference in ingredients between the homemade and store-bought versions!

So save your energy to make the rabbit; there’s quite a bit of preparation needed. The same recipe would also work great with pheasant, and in season (like right now), you can get wild pheasant here.