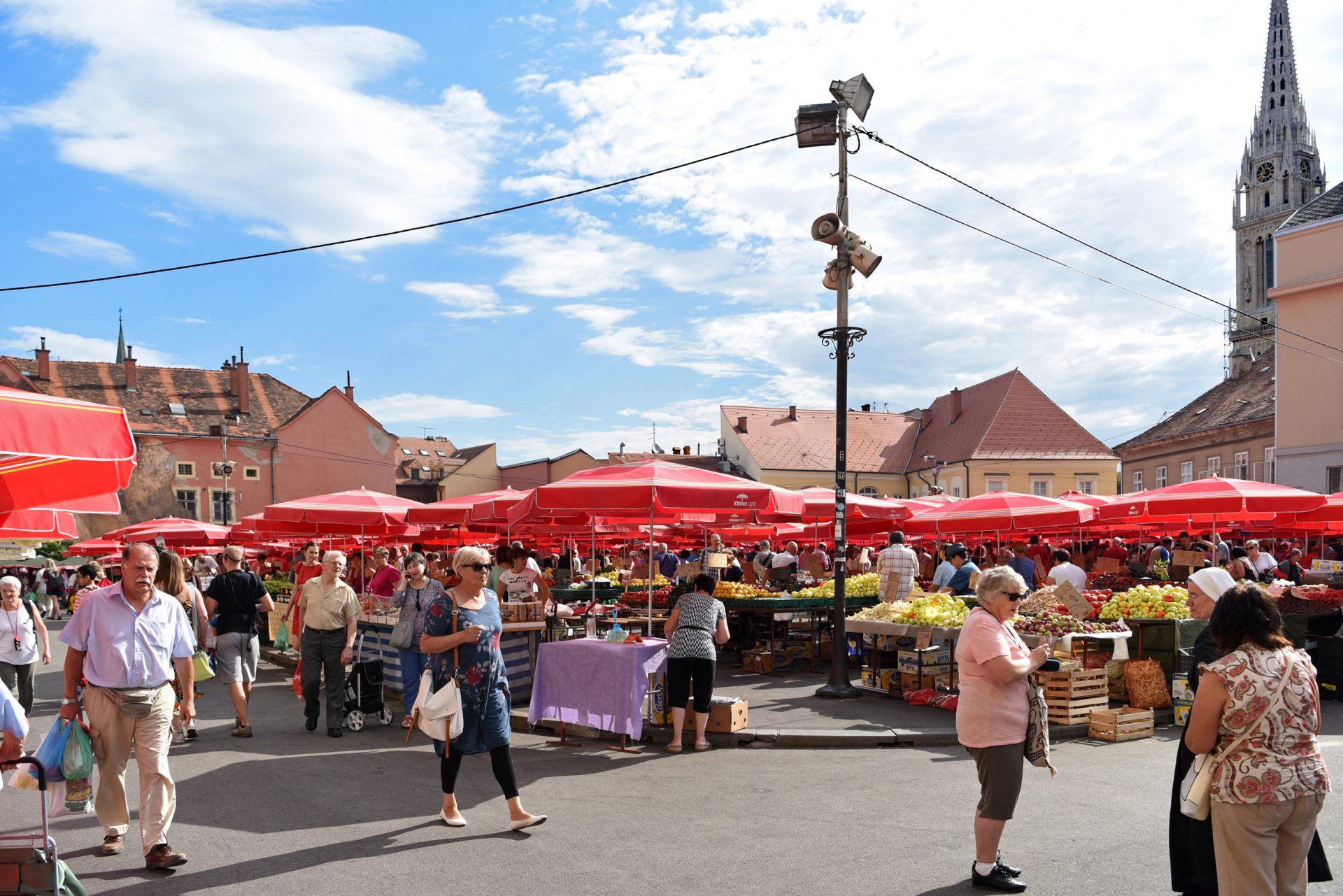 In the heart of Zagreb, between the Upper and Lower Towns, the Dolac Market has been a major trading place since 1930, and it remains the most visited and best known farmers market in the capital. Its layout consists of two parts: on an elevated square, row after row of food stalls covered with red umbrellas offer fruits and vegetables, while at the street level, indoor stalls sell seafood, meat, and dairy products.

I’ve already written extensively about Croatian produce in my recent post on the Zadar green market. Zagreb, being only 250 km away, doesn’t offer vastly different products, just a wider variety. So I’ll skip the potatoes, onions, carrots, peppers, cucumbers, and other tomatoes this time, and just mention a couple of things that caught my eye among the vegetables before heading to the indoor meat stalls.

There are many Croatian recipes with zucchini (in soups, fritters, or even strudels), so it’s no surprise to find zucchini flowers at the market too. Just like in neighboring Italy, they can be stuffed (with cheese and herbs, for example), coated in batter, and fried.

Several vendors sell bunches of assorted vegetables under the somewhat Germanic-sounding name of grincajg. A kind of Croatian vegetable bouquet garni, grincajg bundles together carrots, celery, parsley root (with the leaves), and a few cabbage leaves. This forms the base for many traditional vegetable soups and other dishes. Some variations may also include kohlrabi, leeks, or kale.

Beans, both green beans and shell beans, also seem well represented at Dolac. Green beans are often prepared in a kind of chunky soup or stew, and shell beans are the base for grah (also known as pasulj), a bean stew generally made with pork meat or sausages, popular in the whole former Yugoslavia.

But let’s talk about meat now. The following table shows the meat production by type in Croatia in 2018 (source: FAO):

In the livestock sector, farms that raise cattle, pigs, sheep, or goats are usually small. Poultry production, on the other hand, is characterized by large-scale production units.

Pork and poultry are the largest productions, and they’re also the most often consumed types of meat. According to a 2012 survey, almost all respondents consume chicken, while 1/4 and 1/5 of respondents do not eat pork and beef, respectively. More than half of the respondents never eat lamb or other meats (e.g., rabbit or game).

Plejskavica even comes in several versions: “gourmet” (stuffed with cheese and ham and wrapped in caul fat), patties mixed with cheese, and the house blend (presumably the butcher’s choice of ground meat).

In the offal department, tripe in particular has quite a following in Croatia – if chef Ino Kuvačić is to be believed, according to his book Dalmatia: Recipes from Croatia’s Mediterranean Coast, there are even tripe clubs that gather to cook and eat tripe together! A typical recipe consists of stewed tripe with pancetta, garlic, tomato purée, and potatoes.

Then there are some more unusual meats. Rabbit, for example. There’s actually a surprising number of Croatian recipes for rabbit, especially in Dalmatia and Istria. Dalmatian-style rabbit is wrapped in pancetta and roasted, then served with a tangy herb gravy and pasta. In another recipe, rabbit chunks are stewed in red wine with pancetta, tomato purée, and vegetables. And there’s rabbit goulash, served with gnocchi.

Goose is often prepared on festive occasions, but apparently also available on ordinary summer days. It’s a classic for Christmas and St. Martin’s Day (when the grape must is traditionally baptized and turned into wine). Roast goose is served with mlinci (a sort of cross between flatbread and noodles), chestnuts, or buckwheat kasha. Some regions have their own recipes: Međimurje goose (from the northernmost tip of Croatia) is stuffed with buckwheat, and Turopolje goose (from a region just south of Zagreb) is roasted and served with a kind of polenta.

Croatians eat a lot of pork. Not just as grilled meat, as fresh sausages, or in stews, but also as cured meat. Both panceta (just Croatian for “bacon”) and pršut (Croatian prosciutto) are local staples that appear in many stews and stuffings. And even though Croatia’s no Italy or Hungary, it still produces a respectable variety of dried sausages.

Then there’s čvarci: cracklings, obtained by melting diced pork lard and then slowly frying the solid part in the rendered fat. This hearty food is best consumed in winter – as a snack on its own, as a bite to accompany some potent rakija (the Balkan version of Russia’s classic salo/vodka combo), or in pastries such as pogača.

I’ll keep the dairy stalls and their cheeses for another post, and I might skip the seafood until we travel back to the Dalmatian coast. In the meantime, we’ll soon stop at one of Zagreb’s finest restaurants!