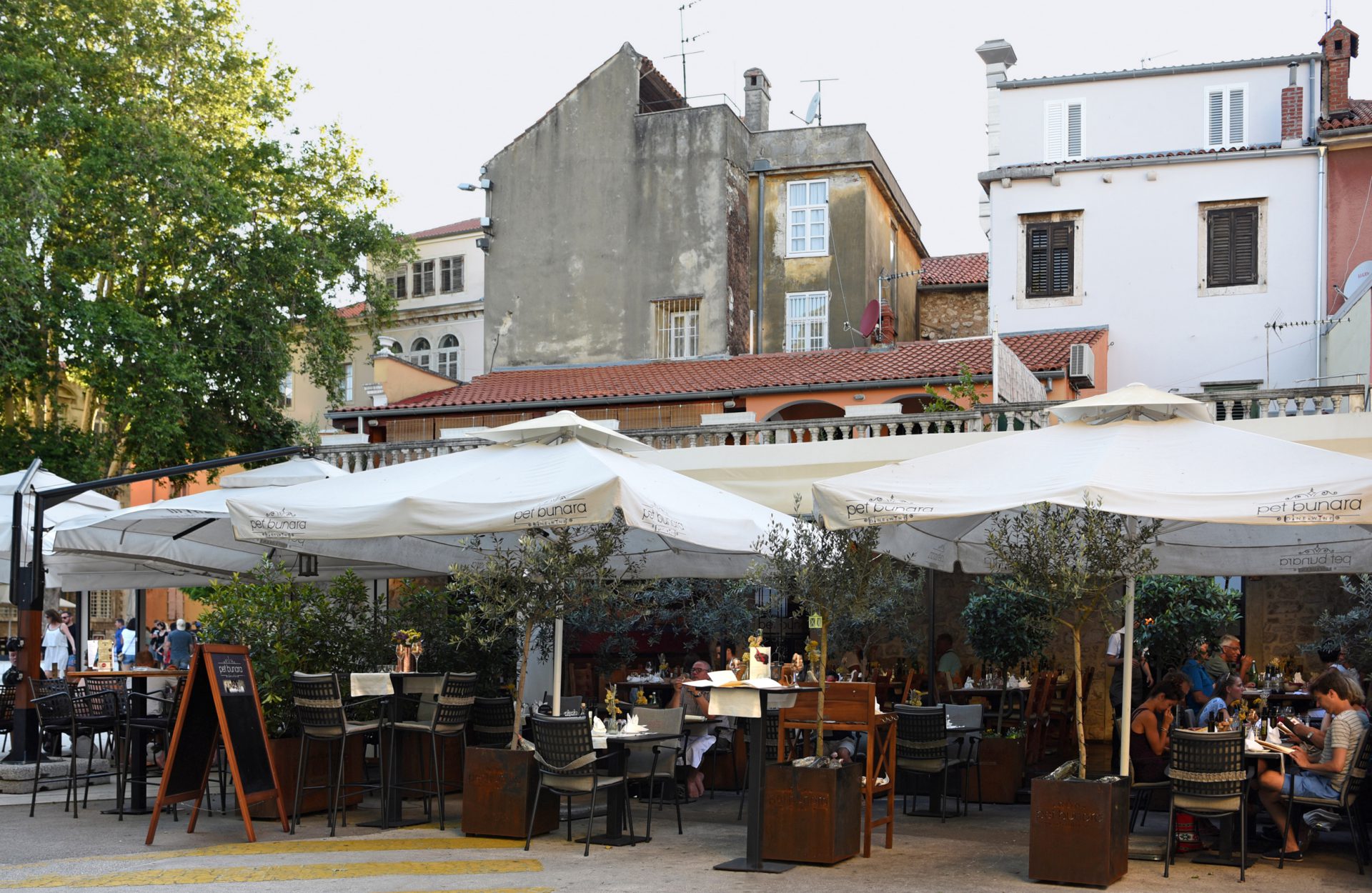 After our visit to the Maraska distillery, we’re staying in Zadar to explore the local dining scene via one of its finest restaurants: Pet Bunara.

In the 16th century, due to the frequent wars between the Republic of Venice and the Ottoman Empire, walls were erected around the old town of Zadar. The newly fortified city needed to secure its water supply, so five wells were built side by side in a single town square. The wells remained in use until 1838, and to this day the Five Wells Square (Trg pet bunara in Croatian) remains, near the Land Gate and the Captain’s Tower.

Founded in 1981, Pet Bunara (the restaurant) is located a few feet from the eponymous square. With a desire to be at the forefront of Zadar’s gastronomic landscape, it serves local, seasonal cuisine paired with an extensive list of equally local wines. It has its own herb garden and its own olive and fig grove. This is a great occasion for us to get acquainted with a few Croatian classics as well as some local creations.

The meal starts with a bread basket and two olive oils. In addition to regular white bread, we get a dark grey cuttlefish ink bread, although the ink (luckily, perhaps) doesn’t impart any seafood flavor. On the olive oil front, there’s one made by Pet Bunara from their olive grove, and another one made in the nearby village of Nadin. Both are very pungent and bitter, which I like.

The octopus terrine, “a local octopus specialty,” consists of tender cooked octopus and nothing else, served on a bed of arugula and topped with a mild balsamic vinegar and sprouts. My main reproach is that the terrine is a little bland and could use more seasoning. Then the little pieces of toast on one side of the plate are undersized, and I’m not sure what I’m supposed to do with the heap of grated cheese on the other side. Not a bad dish, but slightly disappointing.

The orzo nero is a twist on the Dalmatian uber-classic: black risotto. It’s made with barley (orzo means barley in Italian) instead of rice, cooked in cuttlefish ink with leek, and finished with fruity grated cheese (either Parmesan, or some local version). I also taste lemon juice, and its acidity is balanced by the fattiness of the cheese. Is barley an enhancement over rice? No, but the dish is well executed and the cuttlefish is tender. Throughout the meal, you’ll notice gimmicky brushstrokes of unidentified colorful sauces and purées on the plates. I won’t mention them again since they’re really just for show, and I’d be hard-pressed to tell you what they’re made of.

The Napoleon Desire (so named perhaps because Zadar was part of Napoleon’s short-lived Illyrian Provinces) is a braised lamb shank served with potatoes filled with cheddar cheese and wrapped in homemade smoked bacon. The tasty, perfectly cooked lamb meat falls off the bone. I think the sauce is essentially the braising liquid and vegetables (carrots, onions), finished with some plum jam – many items on the menu feature various locally made fruit jams. As for the side, everybody loves bacon and cheese, to the point where I wish there was actually less baked potato. Maybe some of the potato could be carved out and mashed inside?

The pašticada is another traditional Dalmatian dish, a beef stew with a special sauce. The waitperson explains to us that it takes two days to prepare. On the first day, the meat is marinated in red wine and a little bit of vinegar with apples, plums, carrots, and onions. On the second day, it’s cooked for 6-7 hours. It comes to our plate with homemade gnocchi. The dish, by its appearance, reminds me of Czech svíčková, a slowly cooked beef roast covered in a thick sauce, served with a starch that’s just a vehicle for more sauce. The flavors, however, are different: the sauce here tastes mostly like plum and vinegar. Also, the beef’s tenderness results not from the baseline chewability of the meat cut, but from the prolonged cooking (and thin slicing). And compared to Czech bread dumplings, the lighter, slightly mushy gnocchi are an improvement.

For dessert, the Šinjorina Maruška cake is another dish made with local fruit jam – this time a Marasca cherry jam. The cake consists of two layers of chocolate sponge made with coarse almond meal, plus chocolate buttercream in between and on top. While it definitely tastes like cherry, I can’t see any jam. My guess is that it’s turned into a syrup used to soak the sponge (and decorate the plate). Chocolate-almond-cherry is a classic combination, and for several good reasons, such as #1: it tastes great, and #2: cherry and almond both contain benzaldehyde. A green pistachio cream completes the plate, and I wish there was more of it.

Zadar was the first town in Croatia where I stayed, and Pet Bunara was my first meal at a restaurant. From there, we’ll progress down the Dalmatian coast in my next posts, with a couple of stops in Zagreb for variety.

Finally, resuming the practice I started with my Moscow restaurant series, I’ve made a list of all the ingredients that were mentioned on Pet Bunara’s menu on the day of my visit, and sorted them into categories. Only the savory dishes are included this time – sadly, I forgot to make a copy of the dessert menu! Some of the trends we’re seeing are characteristic of Dalmatian cuisine: a preponderance of seafood over meat (with a fondness for octopus and cuttlefish), an abundance of summer vegetables, the use of wild mushrooms (there are black truffles in Zadar, who would have thought!), and the use of a variety of local cheeses. A few other trends strike me more as the chef’s personal preference, such as the inclusion of leeks in four different dishes, or the recurring addition of fruit jams to sauces.

I wish you added a note or two on the service, atmosphere, and overall satisfaction of the venue. As a regular, I can say they’re working hard and improving year after year.