Home RecipesCocktails The Post Office, a Cocktail from the Great Russian North
Cocktails 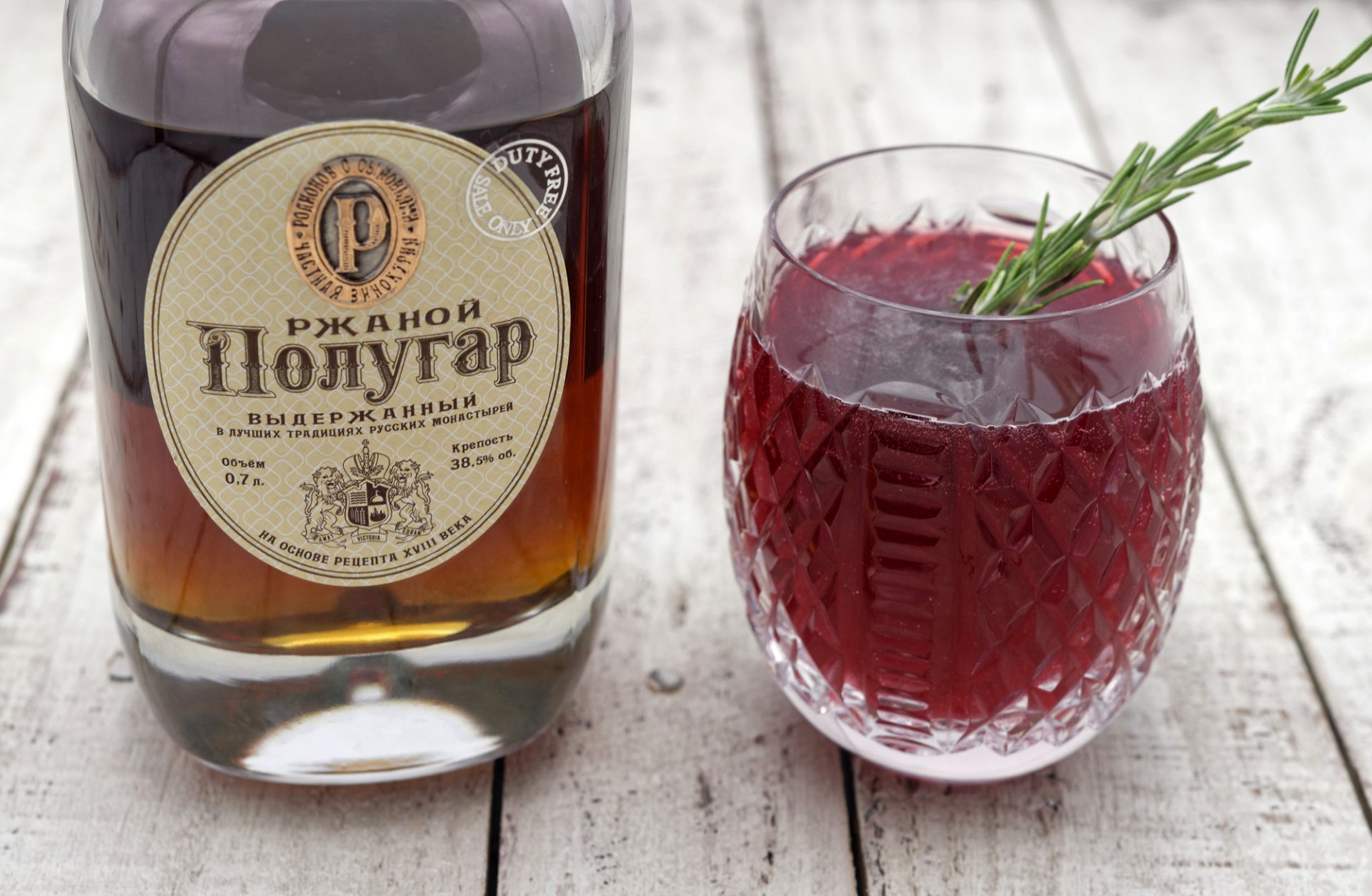 Having recently returned from a trip to the region of Arkhangelsk, I am ready to resume my series on the Great Russian North. And just as with any good meal, I’d like to start with a cocktail. Something not too complicated; something that combines a few typical flavors of the Russian North: rye, cranberry, and… rosemary.

I know, rosemary seems more at home around the Mediterranean than the White Sea. Still, in Russia, rosemary-cranberry has become a somewhat frequent pairing, used both in liqueurs and in non-alcoholic mors. Cranberries, particularly wild ones, are firmly associated with Northern Russia, so I wasn’t surprised to find a vodka infused with cranberries and rosemary at Pochtovaya Kontora (“Post Office” in Russian), one of Arkhangelsk‘s best restaurants.

The idea for today’s concoction was born at that same Pochtovaya Kontora. I was sipping one of their house cocktails, called Sumerki (“twilight”), made with rye vodka, Beluga Hunting berry liqueur, lavender syrup, and plum-cardamom lemonade. Fond memories of Petrozavodsk and that epic night when I conceived of the Petrovsky cocktail kept coming back to me, and I thought it would be nice to renew the experiment and come up with a local cocktail for Arkhangelsk too. After all, Arkhangelsk also has its very own century-old vodka factory, which makes a fairly popular vodka (Arkhangelskaya) and even its own Pomor Balsam (more bitter than the Karelian variety, and made with a different blend of ingredients).

But I couldn’t exactly repeat the same recipes with the same ingredients, merely swapping in the names of the distillery and city! So I picked two Northern flavors from among the ingredients I could find at Pochtovaya Kontora’s bar: cranberry (from that rosemary-cranberry liqueur I mentioned above) and rye (the cereal of choice in the North, used for bread and pies, due to rye plants being better able than other small grains to withstand the cold climate). And since the bartender had a smoke gun that the restaurant seemed eager to use for a variety of drinks and savory dishes, it would have been a shame not to use it! I was ready: rye vodka, rosemary-cranberry liqueur, maybe some soda water or some other mixer (I can’t remember), and smoke it all! I asked the bartender to make it for me right there and then!

I left the restaurant with a blurry memory that the recipe wasn’t quite there yet, but tasted promising. But if I wanted to continue working on this, there was one ingredient I needed to chase down before leaving the country: rye vodka – the kind that actually tastes like rye.

In the past ten years, there’s been one brand in Russia that developed a reputation for making rye vodkas from traditional recipes: Polugar. After ingesting their marketing material, which insists that theirs is a very complex production that requires forgotten recipes, the most noble ingredients, and the very best master distillers, I understood the following: Until the last quarter of the 19th century, vodka, like most other distilled spirits in the world, was produced in pot stills, preferably made of copper. Then came the distillation column, which, thanks to its superior efficiency, started supplanting the old alembics. Perhaps the alcohol coming out was less flavorful, but it was purer, and hey, it got you just as drunk. The government monopoly on alcohol instigated by Finance Minister Sergei Yulyevich Witte, with support from Tsar Alexander III, dealt the final blow to the pot still. Pure alcohol was now produced in dedicated distilleries using the latest technological advances, leaving so-called state wine warehouses with the simple jobs of mixing it with water and filtering it. The vodka factory, a plant that paradoxically bottles spirit but doesn’t distill anything, was born (read my post on the Petrovsky Liquor Factory for more details on all of that). And to this day, this is how vodka is made in Russia.

Polugar decided to go back to making vodka using copper pot stills, which forces them to distill their stuff in Poland rather than Russia. The word polugar itself is one of the names that was given to those pot-distilled vodkas before their disappearance. The company now offers an impressive range of vodkas made from various cereals (wheat, rye, barley, buckwheat) and more flavors than I care to count, from cherry to horseradish. And the good news is, they’re not only available in Russia (where I grabbed a bottle of aged rye vodka at the airport before hopping on my plane), but also in the US, China, and most of Europe (where you should at least be able to find the unaged rye version). Check out their international web site.

Polugar’s rye vodka is produced by triple distillation in pot stills (supposedly reproduced from 19th-century drawings), followed by purification with birch charcoal and fresh egg white. Marketing says it has “a rich buttery texture, bright bread aroma, and the warming and soft taste of rye bread,” not to mention “a complex aftertaste with notes of rye bread, honey and almonds.” Personally, it reminds me of the moonshine I used to make occasionally in my kitchen sink, and had me dreading the hangover it inevitably caused in large doses. Well, maybe I’m exaggerating a bit… This vodka has its charm (and so did my moonshine), and the aged version is mellower, which almost makes the marketing Kool-Aid agreeable.

Getting back to my story, I was home a few days later, finally able to start refining my cocktail recipe. Instead of using cranberry liqueur (which I didn’t have) and soda water, I figured I could take a shortcut for the better by using pure cranberry juice mixed with sugar and carbonating it. As for the smoke, I first tried to use rosemary instead of wood chips as combustible. It turns out that rosemary doesn’t smell very good when smoked. Calling science to the rescue, I decided to make instead a quick pressure infusion of the rosemary in the cranberry juice (go here to read about pressure infusions). Since I was already carbonating the juice in my siphon, all I had to do was add the rosemary to the siphon! So, no smoke this time, but in addition to a great cocktail, you also get a recipe for a delicious rosemary-cranberry soda.

Voila! The Post Office, named after the Arkhangelsk restaurant where it was begotten, and where once again a bartender graciously played along with my bizarre cocktail experiments. It could have been worse; I could have been playing with my defunct Watson Twist.

Note: The ingredient amounts for the soda are provided in grams, as in a cooking recipe, whereas the proportions for the Post Office are listed in milliliters and fluid ounces (in increments easily measurable with a jigger), as in a cocktail recipe.

I love savory cocktails and this sounds fantastic. Did you diddle with the sugar? Not a fan of sweet. I am itching to make it but only have a Soda Stream carbonator. Do you think filtered water instead of soda water carbonated with all other ingredients would work as well. I’ve never tried to carbonate infused liquids with the Soda Stream.
Love your site. Just finished the cevapi, kajmak, lepinja meal…..addicting like Cka Ka Qellu in the Bronx.

Scusate me! I just read the link to pressure infusion. Clearly NOT equivalent to Soda Stream. A siphon is not in my future so I will try an old fashioned infusion of the cranberry juice and when tasty enough strain then carbonate with the Soda Stream. Lesson learned….never miss one of your links.

Be careful using your Soda Stream with anything other than water, marinaramamma, you could end up painting your kitchen walls cranberry red! Maybe you should just infuse the rosemary in the sweetened cranberry juice, then mix it into very carbonated water.