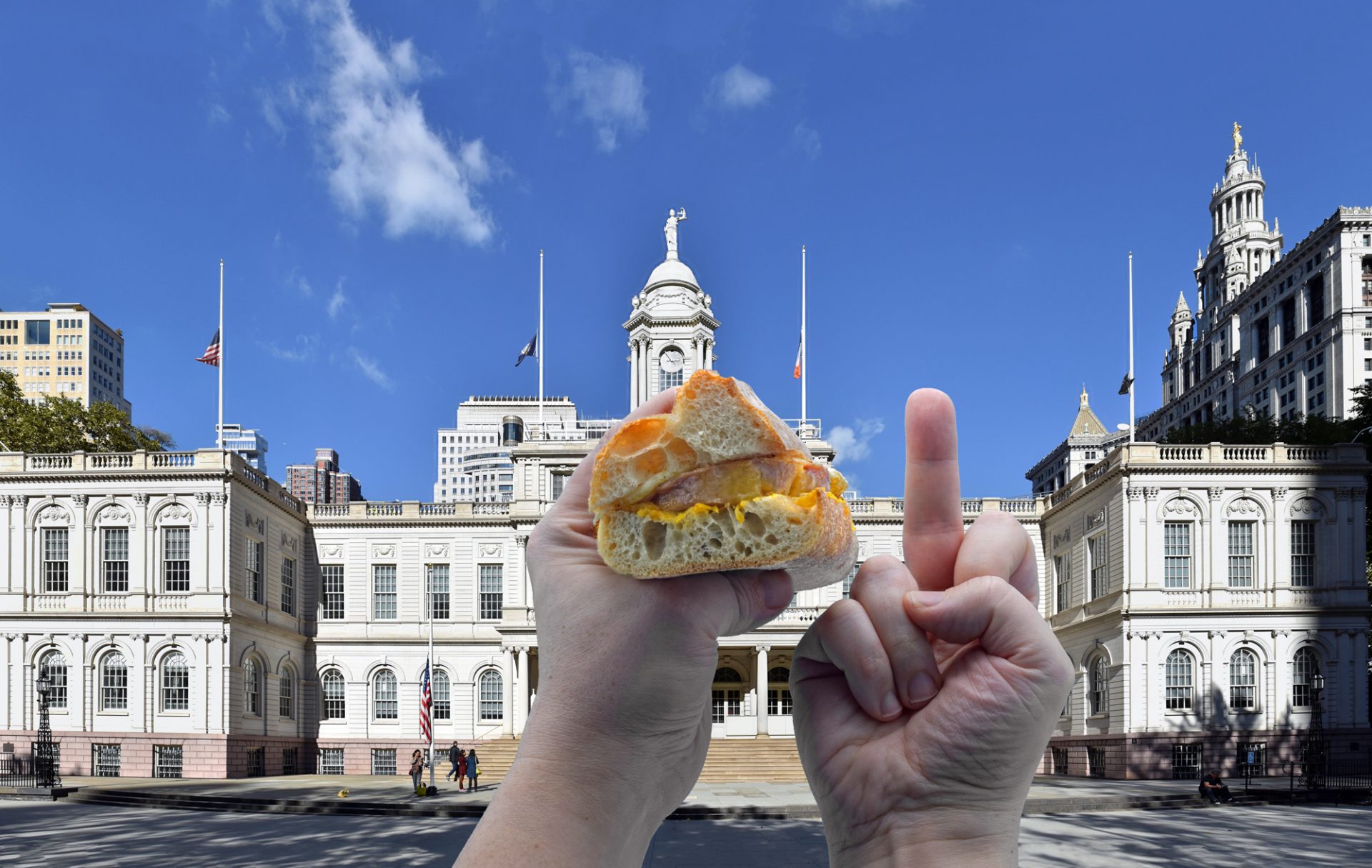 On November 25, 2019, while POTUS was getting ready to pardon a couple of ridiculously-named turkeys before Thanksgiving, Bill de Blasio had other birds on his mind. After dropping a few profound phrases such as “this is about all of us and this is about everything” and “if we allow cruelty in our midst [it] is a poison, a cancer that keeps growing” (as reported here), the New York City mayor signed a bill banning the sale of foie gras, fattened duck (or goose) liver that is obtained by force-feeding the animals. When the law takes effect in 2022, New York City will join the ranks of California and a dozen or so countries – mainly wherein the delicacy was just a luxury import rather than a local product – and neither retailers nor restaurants will be allowed to even store foie gras, let alone sell it, unless they can prove it was humanely produced. You can read the full text of the law here, and the reactions of chefs from across the country (including foie-gras-free California) here and here, which range from “a misunderstanding of the situation,” “as if the letters were taken out of the alphabet,” and “I miss that creative passion for it,” to “it’s fine,” “not worth the hassle of serving it and risking fines,” and “there is certainly enough depth in the French repertoire to cook without it.”

Since several Eastern European countries (first and foremost Hungary) are top foie gras producers, I’ve posted several recipes involving the deliciously fatty liver in various capacities over the years. There’s my plain duck foie gras terrine, which I also use in this New Russian brioche, herring and foie gras dish. I served it hot in these amazing Hungarian goulash, blood sausage, foie gras and pear tartlets, and in these foie gras pierogi. And I mixed it with ground meat to make a Romanian duck pâté pantin and deer and foie gras meatballs. Surely, I must have an opinion about the ban too…

I’ve got to admit that, on the surface of it, the animal rights activists have a point. It’s safe to assume that almost no one is actively for outright, unbridled cruelty to animals, and it’s hard to deny that if you stick tubes down ducks’ throats daily at an industrial pace, a few of the animals are likely to get hurt – it’s just common sense. Activists also tend to go first for what some would call the “low-hanging fruit” of the food industry, and that too is just common sense. As a computer scientist, I believe that large problems are often solved by breaking them down into smaller pieces that can be tackled one at a time, and one could say that as part of a larger movement to prevent cruelty to and/or consumption of animals in general, the foie gras ban follows this logic.

On the other side, I’ve also got to admit that some foie gras supporters’ arguments seem shaky. For example, they like to mention that the technique of gavage dates from 2500 BC, when the ancient Egyptians deliberately fattened birds through force-feeding. True, but tradition is different from righteousness and should never be used blindly as a justification for one’s actions. Others like to explain that it’s okay to force-feed the birds since overeating is a behavior that they adopt naturally. Except, in reality, it’s not something the birds do all the time, and not to such an extreme. Just look at Dan Barber’s recent Instagram post on “freedom foie gras”: “a no-gavage, pastured goose liver that is halfway to full foie gras fattiness”, but with “too little cold weather to kickstart the geese’s natural [tendency] to overeat.”

If I don’t sound much like a defender of foie gras so far, let me state now that I am indeed against the ban, though I make a different argument than those above. I instead point out that our entire global society is based on the exploitation of animals. At first, we domesticated animals for survival, to guarantee a steady food supply. All that time that our ancestors no longer spent hunting and gathering allowed them to make technological advances that gave birth to our civilizations. Over the millennia, we started using animals any way we saw fit, not just for food, but also for labor, and eventually merely for our pleasure, i.e., household pets.

Today, for the most part, we humans control what animals come to life and what animals die. We decide how, when, and where they live and die. Through selective breeding, we choose what they look like and what they’re good at. Just look at our food chain. Not content with simply killing animals to eat them, we create new breeds and farming practices that maximize our eating pleasure and economic profits: poultry with enormous breasts, cows with marbled meat, cows that give more and more milk (thanks to farmers who breed high-producing cows and the sell their genetic materials all over the world), chicks tricked into hatching more eggs by altering perceived day length. Animals born the “wrong” sex are killed at birth (e.g., male chicks cannot lay eggs and aren’t suitable for chicken-meat production). Radical changes are made to animals’ natural diets to increase yield and reduce costs.

But – without getting into any discussions on differences of scale or types of farming, meat-eating versus veganism, or the very soundness of meat production in an increasingly fragile ecosystem – I’m not only talking about the animals we eat. I would argue that pet-keeping is an equally severe example of animal exploitation. Pet-keeping in the modern sense rose in popularity during the Victorian era, when pets were used as decorative objects, show attractions, and symbols of social status. It hasn’t changed much today; pets and their care have evolved into a multi-billion dollar industry. And though one might emphasize companionship as the main motivation for having a dog or cat, it’s a much harder case to make when the pet is a goldfish.

Exploiting animals for our pleasure isn’t limited to labor, meat-eating, and pet-keeping, either. We raise pheasants in pens so we can release them and shoot them with our hunting party. We raise rodents for use in scientific studies. We guide horses with a whip so they can perform mostly hollow tasks, such as running at the races or carrying tourists around Central Park (which de Blasio still hasn’t banned for some reason, despite campaign promises). The lists of species that we either exploit for our entertainment or consider nuisances and try to eliminate could go on and on.

So here’s what I’d like to ask the animal rights activists who fought so hard to ban foie gras, a food product so marginal that most Americans have never heard of it, let alone tried it. If you are against all forms of animal exploitation, take some time to consider how engrained animal exploitation is in our societies, and explain to me how this new society that you call from your vows will function? And if you’re not against all forms of animal exploitation (which I suspect is true of the majority of activists, according to how I have defined exploitation), then how do you decide, without hypocrisy, which forms are okay and which ones aren’t?

Yes, we raise and force-feed ducks because their oversized livers are delicious (and hey, their meat doesn’t taste bad either). On some rare occasions, this may wound the birds, but regular inspections should ensure that this is the exception and not the norm, just like for any other farming practice. So why is gavage actually worse than keeping pets in little cages, clipping a parrot’s wings, or neutering a dog? Not all animals are equal, and some absolutely need protection. I can also agree that most people eat too much meat, and that many industrial farming practices are not sustainable and can’t be scaled to accommodate human population growth without significant damage to our environment. But while humans are a type of animal, it’s clear that animals are not people too.

So in support of New York’s foie gras, here’s a simple but delicious sandwich:

Be sure to eat my foie gras sandwich often and to share profusely on social media. It’s not even as rich as you’d think: the amount of foie gras in each sandwich contains about 370 calories, so the whole dish is probably less caloric than the cheeseburger at the diner, not even counting the fries. And I’m serving with a salad instead!

(The featured picture of me and my foie gras sandwich flipping the bird at New York City Hall is adapted from a photo by https://commons.wikimedia.org/wiki/User:MusikAnimal – the hands are mine. License: https://creativecommons.org/licenses/by-sa/4.0/)