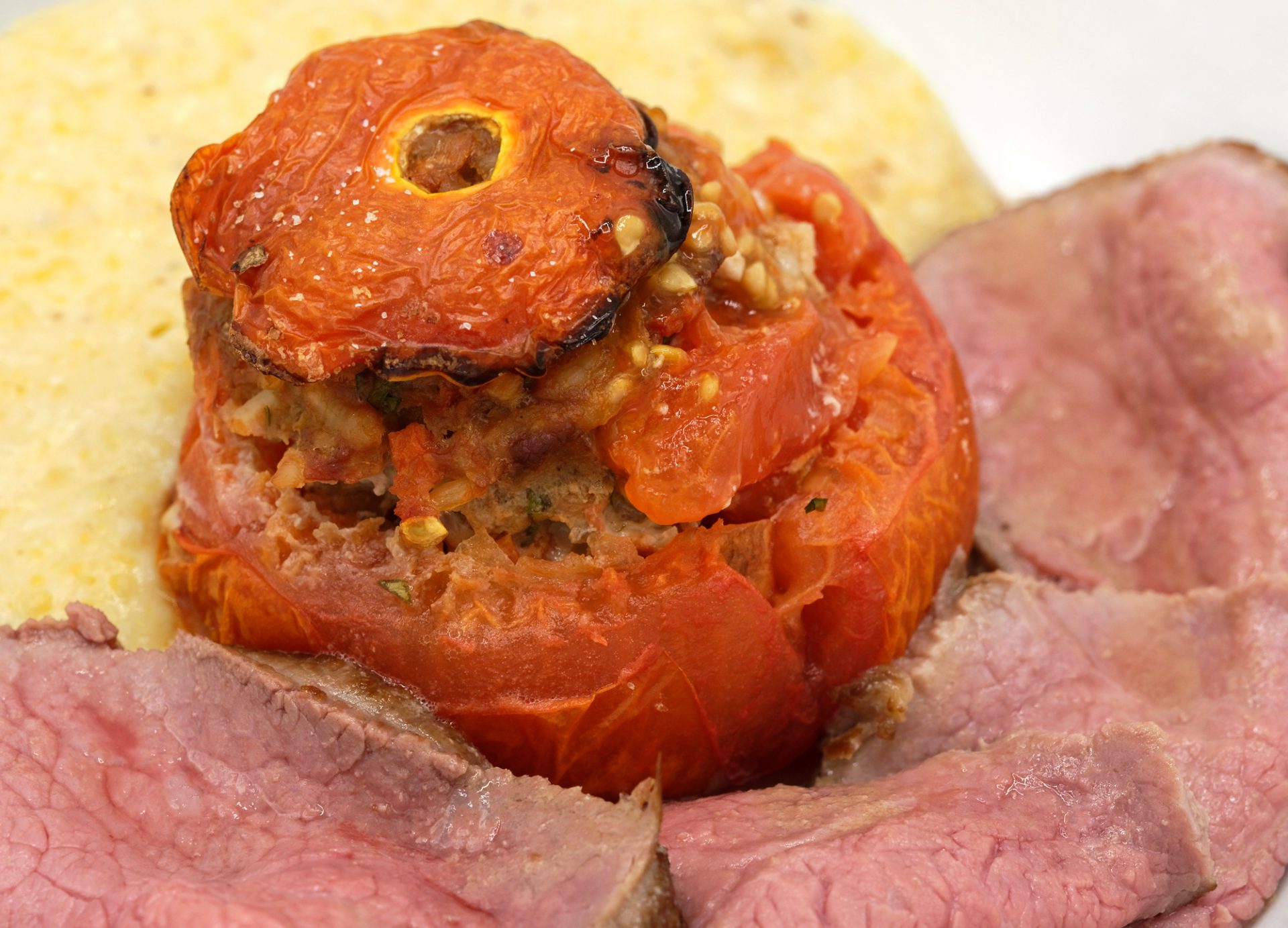 It all started with a dish I tried at Jezero, Plantaže‘s restaurant on Lake Skadar in Montenegro. During the tasting menu that followed our epic visit of the winery, the chef served us a beef tenderloin roast with mashed potatoes and a carob-blackberry sauce, which was paired with one of Plantaže’s excellent reds, the Vranac Reserve. (In case you wonder, the two M’s on the plate pictured below are the shared initials of the chef, Mladen, and the head sommelier, Miroslav.) While not necessarily the most inventive dish – after all, it’s another variation on steak and potatoes – I liked the sauce and its use of carob. My task was then to change the recipe into something new that I’d post on this blog. So my mind started wandering… A LOT.

First, I didn’t want to make another potato purée (I did a Russian tomahawk with aligot less than a year and a half ago), so I borrowed the side from another dish I had at Jezero: cicvara. A kind of polenta with farmer cheese and kajmak, cicvara was traditionally prepared in a cauldron above the hearth and was often served for breakfast before days of hard work. The dish seems to be falling into oblivion, and you won’t find too many hits on the web. The recipes out there include similar ingredient amounts and cooking methods. Mine isn’t very different, though it’s a bit thinner since I’m not about to head out for a day of hard work. What a great coincidence that I just published a kajmak recipe, wink-wink! Check out this video to see the whole preparation (sparkling water optional):

Then the beef. Tenderloin/filet mignon is a cut that’s often poo-pooed by chefs. Just consider this: in a recent Thrillist article, out of the fifteen chefs interviewed (though none of them exactly world-class authorities), eleven named it as the most overrated beef cut. And all of them repeat in unison: “no fat”, “no flavor”, “no texture.” They do admit its extreme tenderness, but apparently that’s not enough to make the cut.

I don’t agree with this judgment. I think the unrivaled tenderness of beef tenderloin makes it worth seeking as an occasional change from the usual porterhouse, ribeye, or New York strip. And even if it has a pretty mild flavor, it’s still recognizably beef. But in a diplomatic effort rather unusual for me, I set out on a quest to find other cuts which, prepared properly, would produce a roast nearly as tender as tenderloin, but more flavorful (and inevitably cheaper).

It turns out there’s a cut that’s exactly right. The petite tender, aka shoulder tender, aka teres major, comes from the shoulder blade but is rarely sold as an individual muscle, as it requires some skill to extract from the shoulder clod. A very close second to tenderloin in terms of tenderness, though smaller in size, it can be prepared the same way and offers a deeper beef taste, all for about a third of the price – more details here. Incidentally, only one of Thrillist’s fifteen chefs mentions it!

But! While the shoulder tender would work great in today’s recipe, that’s not the cut I’ve chosen. Following many trials, I’ve decided to work with an even more humble cut: the eye of round, which is often used for roast beef at the deli. Lean and flavorful, located somewhere in the middle of the round (i.e., the butt), its rather large size makes for a beautiful roast on the carving board, and when cooked properly and sliced thin, it can be quite tender (though granted, it is no tenderloin).

Every steak and potato dish could use more vegetables, and I just so happened to have stuffed tomatoes on my mind. Stuffed peppers are a traditional Balkan dish, the peppers filled with a mix of rice and meat, like in this Serbian recipe. Here, however, the goal isn’t to add more meat to our beef roast, so my ingredients include only a touch of meat, with a lot of vegetables and rice. Plus, the cooking liquid from the tomatoes goes perfectly with the cicvara.

So it turns out I’ve replaced every ingredient of the original dish. We’ve gone from a beef tenderloin roast with mashed potatoes and carob-blackberry sauce to a beef eye of round roast with stuffed tomato and cicvara! We’ll have to keep the original blackberry-carob sauce idea in mind for some other time.